After the Trigger Warning 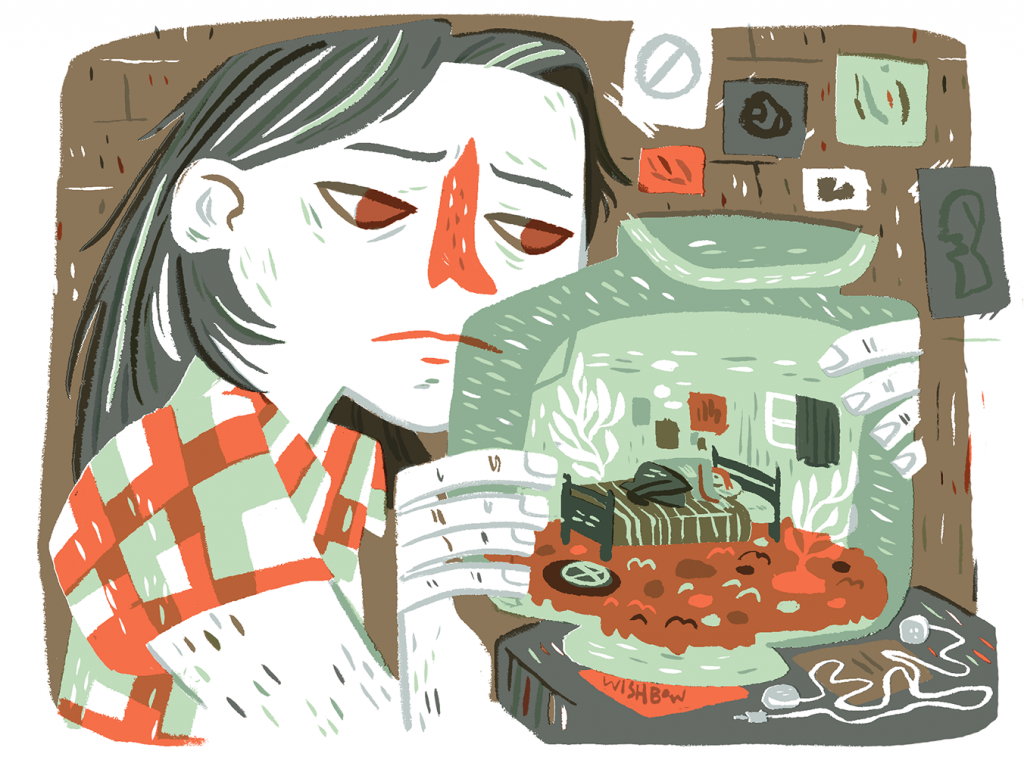 illustration by Pam WishbowGrace has some problems. She works in a short term housing project for teenagers, she’s dating her co-worker, and she’s pregnant. Grace has been pregnant before, we learn. She’s had abortions before, too, and this one will likely be no different. This is how things begin for Grace in the first few minutes of Destin Cretton’s debut film, Short Term 12.

Grace is only a supervisor of the teenaged residents at the foster care facility Short Term 12, but it’s hard not to think of her as a mom. She and Mason, her co-worker/boyfriend, preside over the tenants as both disciplinarians and friends. The kids are there because their parents were abusive, or incapable of being parents, or maybe in jail. Grace and Mason are not therapists or child care professionals of any kind; their duties are rather limited, but they pour their heart and souls into the job all the same.

Short Term 12 is not an easy movie. It demands much of you. It will make you uncomfortable and probably make you cry. But, in a credit to its filmmakers, it never once feels manipulative. Each moment, as Grace deals with her dark past and the difficulties of the kids placed in her care, feels put together with genuine emotive heart. They earn each one. All of the residents get to have their moments as well, whether it’s new supervisor Nate, who receives a face full of spit in his first week, or Marcus, the oldest tenant at Short Term 12, about to turn eighteen and unable to come to grips with the terror of having to return to his drug-addicted mom, or when a new tenant named Jayden arrives, with a history of cutting and abuse that echoes Grace’s own. These characters are presented with such earnestness and skill that at times they feel more like documentary subjects than actors.

Despite the decidedly serious subject matter of Short Term 12, the film still manages to mix in humor in the most genuine of ways. The slice-of-life tales that Mason tells of his work at the facility throughout the film manage to bring about laughter, both onscreen and off. And when Nate foolishly tells everyone he feels lucky to be working with “underprivileged kids”, Marcus is quick to respond with a hilarious but well-earned “What the fuck is that supposed to mean?” The funniest moments in this film aren’t “jokes” per se, but rather a light shining down on one humorous truth or another.

There are so many narrative strands knit together in Short Term 12 and the film does such a perfect job of letting all these disparate pieces simmer and stew. Marcus, the soon-to-be eighteen year old terrified of having to fend for himself after he’s kicked out, is also an aspiring rap artist. When he performs his latest song for Mason, the result is raw, and utterly heart-wrenching. Marcus, the eldest tenant, is sent reeling when his pet fish dies. He takes a piece of glass from the fish bowl, and Grace quickly becomes worried that he’s going after Luis, a tenant he’s been fighting with recently. But then Grace discovers that Marcus has cut himself, instead. And that’s when the movie breaks you. This is the great success of a film like Short Term 12, that each supporting character is allowed to develop into a fully formed human, a person you grow to love.

“Short Term 12 doesn’t waste its time trying to understand why terrible things happen. It doesn’t examine the guilty, but instead focuses on the innocent. The film takes a long hard look at the victims of abuse, how they work their way through it, and how they struggle to overcome its awful legacy.”

Despite how much they clearly love each other, Grace continually keeps Mason at arm’s length, refusing to let him too far into her world, though we’re not sure why. Midway through the film, Mason and Grace attend a party overflowing with joy, and we soon learn that Mason was raised by the hosts of the party, his own foster parents. He toasts them and tells them they are the reason he’s been as happy as he has been in this life. And that’s when the movie breaks you again, when you realize that Mason is emotionally damaged as well—just like Grace—but in his case, parents turned out to be the remedy, rather than the cause.

Grace’s father is scheduled to be released from prison shortly, but we aren’t able to fully grasp the weight of this news until much later in the film. When Jayden tells Grace a story of a tortured octopus being eaten by a shark, and then leaves for a weekend with her father, Grace races after her, convinced something monstrous is happening. The two of them sit together in Jayden’s yard, in the dark, and Grace confesses to her that her own father sexually abused her, and got her pregnant, before she was finally able to gather the courage to testify against him years ago. That’s when the movie breaks you even more, reminding you that there is some seriously ugly shit in the world, but still managing to handle it with a delicate and sensitive touch.

Short Term 12 doesn’t waste its time trying to understand why terrible things happen. It doesn’t examine the guilty, but instead focuses on the innocent. The film takes a long hard look at the victims of abuse, how they work their way through it, and how they struggle to overcome its awful legacy. Grace isn’t “fixed” after her confession to Jayden. She’s still damaged. But she’s also able to move forward, and learns to let Mason in just a little bit more along the way.

When I was a freshly minted driver at the age of sixteen, I rear-ended someone. The airbags didn’t go off—which was fortunate, as I probably would have broken a wrist—but the whole front of my parents’ minivan was caved in and the exhaust pipe of the car in front of me cut a perfectly round hole in the front license plate. While we pulled off to a side street and waited for the police to arrive, my pastor happened to be driving by and before I knew it he was standing right next to me. He wrapped me up in a big hug, and that hug told me I could begin to breathe again. That hug reminded me that everything would be okay.

And that’s how Short Term 12 feels. It grabs ahold of you, and brings up many difficult things. It makes you feel scared and vulnerable. For a little while you begin to feel like maybe things are going to get stuck there, that you’re going to have this feeling forever. Then it wraps you up in a big hug. The hug doesn’t erase or deny any of things that came before it, but it does remind you that there’s still hope: that things will get better.

All the bad shit is only short term.

Chris Cantoni was one of the earliest Bright Wall/Dark Room contributors, writing regularly for the original website from 2009-2012. He now lives in Los Angeles with his wife, who is smarter than he is, and their cat, who is not.