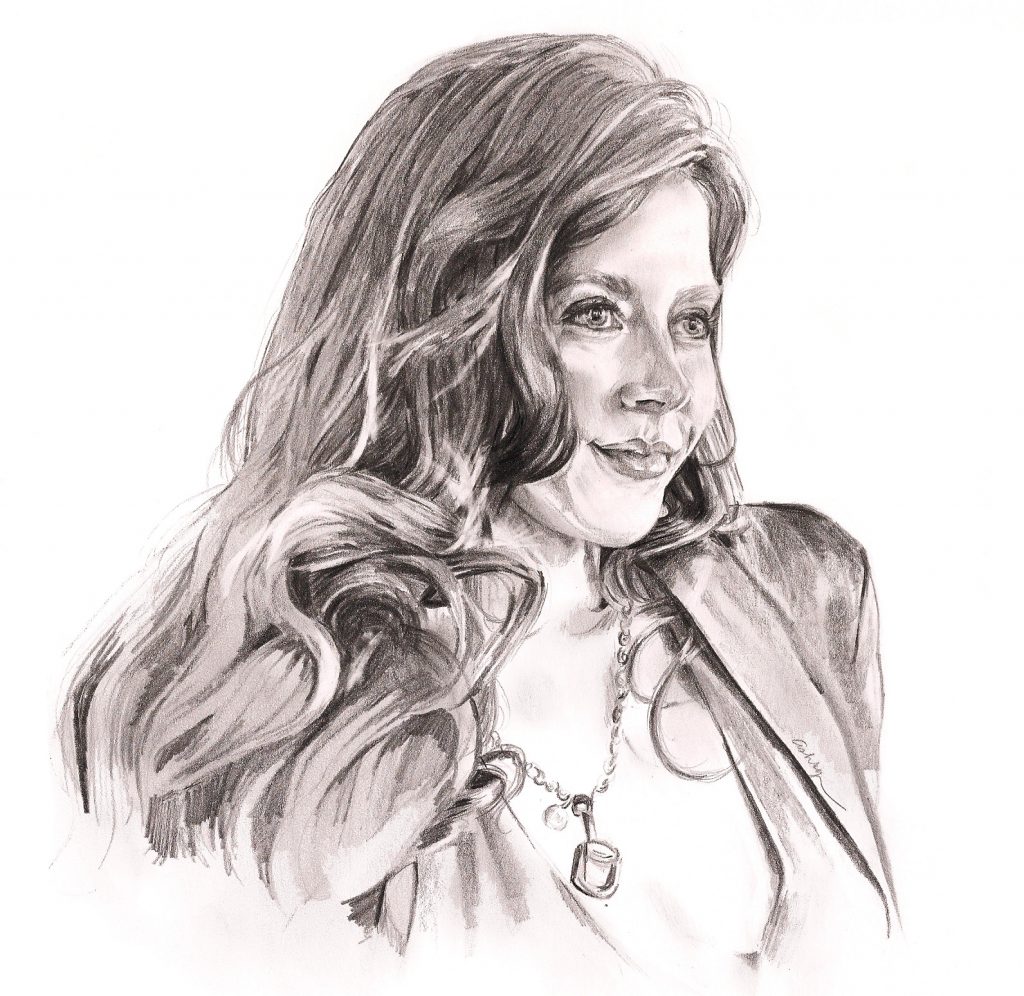 Many of the (glowing) reviews of David O. Russell’s American Hustle begin with the beginning: the opening scene, in which Irv Rosenfeld (Christian Bale) stands in front of a hotel mirror, patting and glueing and arranging and smoothing and otherwise meticulously curating the most elaborate toupée and comb-over ever put to film. It’s no surprise we are drawn to this scene; not only does Bale manage to capture all the idiosyncrasies and strengths and fatal vulnerabilities of his character in just one short montage (a fitting juxtaposition to his morning grooming routine in American Psycho), but the scene also metaphorically captures the soul of the film itself.

Before we can talk soul, though, we have to talk body. (And boy, what bodies.) Russell drapes his direction over a wily frame—a story not really very truthful, but “some” of which “actually happened”—a comedy about sad people—a con artist yarn spun from the stuff of the FBI ABSCAM operation in the late 1970s and early 1980s. At the start of the film, we watch Bale’s surprisingly empathetic Rosenfeld, a career con man, find his match and partner-in-crime: Amy Adams’s steely and supple Sydney Prosser, who assumes a British accent and an appropriately silly name (Lady Edith Greensley) to help Rosenfeld trap unfortunate, desperate men in loan schemes. The two get caught in the act by FBI Agent Richie Di Maso (Bradley Cooper), who forces them to work for him to entrap other con artists.

For a few brief moments, the film’s plot is straightforward. Then we discover that Prosser is, in addition to being Rosenfeld’s soul- and team-mate, his mistress; Rosenfeld goes home at night to an enjoyably unbalanced wife, Rosalyn Rosenfeld (Jennifer Lawrence), with whom he stays ostensibly for the fighting and the fucking, but really for the son he’s adopted and grown to love. And then we discover that Riche Di Maso may not really be the intelligent, intimidating government protagonist we think he is—that his attempts to bring “justice” to his world may, in fact, be more toxic than anything else we’ve seen.

These plot twists don’t unravel with a slow suspense. These characters don’t linger on emotive moments. They flash by you, they sneak up on you, they’re ahead of you. They want to get somewhere just out of sight and they want to get there fast. They’ve calculated the angles. They’ve hustled.

Russell’s take on his characters is Whitman-esque: they contain multitudes, they are ecstatic and wild and give of themselves too easily, they are indiscriminate with their bodies and their hearts, they are in a state of constant revision. They are you, they are me, they are the guy down the street we run into getting coffee, they are the man on TV we hate, they are the women from our past we fear.

American Hustle captures us because it gets us. We get up in the morning and we stare at our faces and we drink our coffee and we try to mold ourselves into the thing we want everyone else to see when we walk out the door. This thing is fragile and it is carefully constructed and it is beautiful and it is insane, like those towering cakes made from impossibly thin spun sugar and unstable buttercream that people have to transport from hotel rooms to banquet halls on certain Food Channel pastry competitions. O America, O nation of comb-overs. We are here and we are tired of the game but we are still playing it, goddammit, until the very last awful second.

It takes energy to keep up appearances. It takes vigor and optimism and a healthy dose of self-esteem and lots of caffeine—or, you know, a measure of some even stronger substances, depending on your proclivities. It takes a rollicking late–70s soundtrack and a riotous camaraderie among your performers and quick-fire banter and townhall meetings and heart medication and mob tactics and Louis C.K. and hair curlers that just won’t quit. It takes sex and gambling and fights in the women’s room and joy in the shape of a gun and invisible fiancées and sequins and imported nail polish. It takes despair. It takes hope.

to obtain money by fraud or deception; obtain by illicit action; swindle, cheat.

American Hustle is, of course, about fraud—personal and political, monetary and emotional, (notionally) historical. You can’t have fraud without deceit, and you can’t have deceit without transformation. The things and people that dupe us do so because they have been altered—because they purport to be something they are, at heart, not. Russell’s lens on the film’s action seems less interested in the deceit itself than in the power of the transformation. The power of the flesh: its malleability, its willingness to bend itself and stretch itself and manipulate itself to suit The Other. (Its susceptibility to toupees.) His characters perform all kinds of self-renovations in their attempts to win others over to the selves they wish they were: rows of tiny pink hair curlers in Richie DiMaso’s hair to crimp away his desperate wish to be anything but what he is, to be Important; a peculiar, particular, sweetly rotten nail polish on Rosalyn Rosenfeld’s nails; Sydney Prosser’s barely passable feigned British accent; Mayor Carmine Polito’s garish suits; The Combover.

Russell’s film gains from its slightly meta nature; the actors he has chosen here have all also undergone their own reinventions. Bale’s body is, of course, famously and constantly in flux; to think of Christian Bale is to understand the power of the will to transform the flesh over and over and over again. To bulk out, to starve, to re-tone, to sculpt, to strain, to fatten. And somehow, as the pot-bellied, soft-bodied, tragically-maned Rosenfeld, Bale has never been moreconfusingly alluring. It’s as though this new layer of flesh has pillowed him out a little. Has allowed him to embrace where he used to brace back. (At the film’s close, I desired him.) Amy Adams, too, has sculpted herself in the spirit of her character; her body is incredible, her sex appeal undeniable, her lithe leg-crossings understandably seductive. (Watching Herthe night after American Hustle, I had to keep reminding myself that it was the same actress. Adams truly melts into her characters.) Sydney’s assumed accent reminds the viewers of the actors’ own vocal manipulations. Jennifer Lawrence has mastered the art of appearing to be fully “Just Herself” while also performing wildly in character, with complete abandon from the self.

So yes, our ability to transform—and, thus, to deceive—can be (and is!) celebrated. Exquisitely. Fooling the world: a classic, eternal dance we all by turns engage in and observe with relish. Fooling yourself, though? That’s something else. And here’s the dividing line between Rosenfeld and Richie—we sympathize with the one who puts on a face for others. We revile the one who can’t see his own face clearly enough to be able to disguise it properly. Who uses others to perpetuate a dangerous and solipsistic imagination.

Rosenfeld and Sydney bond over a Duke Ellington record. Before we know it, they are pressed together between dry cleaning racks. They shove their “real” lives out of the way for each other. They are in a hurry to share their deepest secrets, to bond together over their easy manipulation of other people—of people who, of course, deserve to be manipulated.

Everyone in this movie is in a hurry to do something. To rise to the top. To get out of jail free. To transform a neighborhood. To take out the bad guys. To get the fish out of the ice. To tell their stories. The quick back-and-forth of the lines, the improvisatory nature of Russell’s filmmaking, only adds to this feeling that we don’t have enough time to cram everything we want in. We are hungry. We are always hungry. The music stops but we want more. Who cares whether or not the heart can take it.

a catchall name for some disco dances which were extremely popular in the 1970s.

I like you, Richie admits to Sydney in what is simultaneously an old cop trick, an FBI play—win the target over, make them think you’re on their side—and a truth: he really does like her.I like you, he mouths silently.

It’s hard to tell who the antagonist in this movie is, if there is one. The obvious choice is the bang-up team of Rosenfeld and Sydney—after all, they’re the ones duping poor guys into losing thousands of dollars. They’re the ones running the scam. They’re the ones who get arrested. But there is something so utterly truthful about them, so appealingly sad and needy and deluded and earnest. So we could say that the quick-to-bribe Mayor Carmine Polito, the eventual target of Richie’s unapproved FBI operation, is the one we should cast aspersions on. He’s corrupt, he’s underhanded—but, then again, he also cares about his community. Indeed, as the film unfolds, Richie’s ambitions look more and more suspect. He’s not as interested in taking down crime as he is in building up his own reputation. But we have to have some soft spot in our hearts for him, too—for his struggle to become something more than what he is, for his desire to grasp at this American Dream we are all promised.

Oh. The soft spot in our hearts. Perhaps now we’re getting somewhere.

It’s our human susceptibility to caring for others, after all, that’s going to take us down in the end. It’s the reason Rosenfeld and Sydney get exposed in the first place—though Rosenfeld gets the feeling something is off with Richie’s purported offer, Sydney has a soft spot for the man, and takes his check perhaps against her better knowledge. It’s the reason Rosenfeld sticks with his poisonous, toxic, but oh-so-fun wife; he doesn’t truly love her, but he’s developed a serious bond with her son, his adopted child. It’s the tragedy at the heart of it all: if we didn’t have to care about each other, if we didn’t ever form those incredible friendships that we’d later torpedo, if we didn’t fall in love, if we didn’t have the caress in the bathroom stall, none of this would hurt the way it does. The heart wouldn’t give out. The door wouldn’t slam.

Opening ourselves up to others, it would seem, is synonymous with leaving ourselves vulnerable to a scam, a deception, a fraud, a fall. A fatal slip. A double-cross.

Or, perhaps, a dance.

Elizabeth Cantwell is the Managing Editor of Bright Wall/Dark Room. She is the author of one full-length book of poetry,  Nights I Light the Tiger Get You (Black Lawrence Press, 2014) and a chapbook, Premonitions (Grey Book Press, 2014). She lives in Los Angeles with her husband (screenwriter Chris Cantwell) and their son, and teaches Humanities at The Webb Schools.