Hello to the Other World 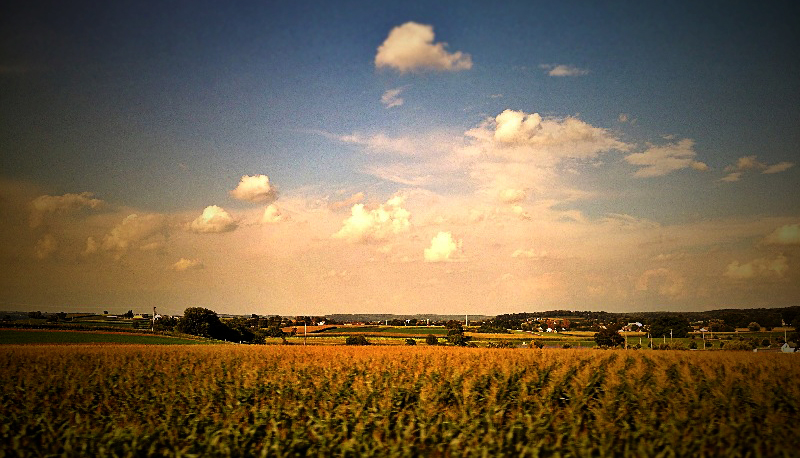 photo courtesy of the authorAs a kid, Witness was the chunky bright red VHS tape that I wasn’t supposed to watch. It was too ‘adult’ (which, in this case, translated into boring) and, therefore, was not for me. But I also knew that Han Solo/Indiana Jones was in it, and that it essentially took place in my backyard, so I bookmarked it for a later version of myself.

I grew up minutes from Amish country, an area mostly situated in and around Lancaster County, Pennsylvania. It’s a place I’ve come to recognize as a beautiful piece of earth, one that I took for granted as a kid, when I viewed the Amish as merely the mysterious occupants of nearby farms and towns. Many years later my parents still live there, and though much of the life I knew has disappeared, it still can be counted on for some stunning sunsets over rolling green landscapes, as well as the occasional horse and buggy ambling down the road.

I’m currently working in Manhattan and living in Brooklyn. After five years of calling New York City home, the routine has boiled down to work, freelancing on the side, friends, and short-term hermitages—lasting from a few hours to an entire day—to stop, think, and write so that my passion projects don’t fall too far to the wayside.

Recently though, I’ve been heading back to Pennsylvania more frequently to check in on family. When I get to Penn Station and wait for my train to be called, the business of the day naturally begins to fade and I start to think about where I’m headed. It’s a different kind of wait, not the same as eagerly leaning out over the platform to look down the subway tunnel, as if mere impatience can will a thing to arrive. Instead I’m reminded that waiting can have value, that this is a time where I don’t need a countdown at the bottom of some screen to tell me how much of this unbearable moment is left, but instead is a chance to just be myself, alive.

This is how it begins for me every time.

After the death of her husband, Rachel (Kelly McGillis) and her son Samuel (a young Lukas Haas), leave their Amish community to visit extended family in Baltimore. While stopped in Philadelphia’s 30th Street Station, the boy witnesses a brutal murder in a public bathroom. The two soon meet John Book (Harrison Ford), a police officer who takes on the case. He quickly uncovers some dirty dealings within his department tied to the murder, forcing him to go into hiding within the Amish community of the boy and his mother. While there, Book slowly begins to assimilate into their way of life, taking on chores and becoming a surrogate member of the family, while developing a relationship with Rachel. Their connection is, of course, controversial to the Amish, and creates the added complexity of a love triangle with Rachel’s Amish suitor, Daniel (Alexander Godunov). As the killers’ search for Book’s whereabouts intensifies, he and Rachel must come to terms with their feelings towards one another, and the inevitable doom of this bond, brought about by cultural divide.

There was a fair exchange in place between director Peter Weir and Hollywood in the ‘80s and ‘90s. Witness, The Mosquito Coast, Fearless, Dead Poets Society, and The Truman Showmade the studios happy, offering them some potential Oscar bait, while Weir was kept happy because he got to do his own thing, exploring various thematic culture clashes through setups in which images often trumped words. Witness is a strong example of this: a fairly straightforward cop story that develops far greater meaning by taking on larger themes of pacifism and violence, tradition and change, duty and desire.

Silence is prevalent in all of Weir’s work. When discussing the topic recently, he denounced the modern screenplay as being “choked with dialogue,” his preference being to let images speak for themselves. In Witness, the sparseness is expansive. The horse and buggy overwhelmed by modern mechanized traffic. The young Amish boy at the train station staring up at the imposing bronze statue of Michael the Archangel, which seems to be looking back down at him, a canny use of foreshadowing. The moment where he recognizes one of the murderers in a photograph, (the blocking and shot design of which feels like something M. Night Shyamalan has ripped off time and again). The barn-raising montage, where the love triangle between Book, Rachel, and Daniel is put on public display. The car radio that plays Sam Cooke’s “What A Wonderful World” as Book leads Rachel into a dance, the quintessential high school moment she never had the chance to experience. The restraint found in the scene where Book encounters Rachel naked in her room during a rainstorm, his voyeuristic gaze matched by her full embrace of the moment. The care with which she removes her bonnet and places it upon the table before running out to Book in the field, a symbolic gesture that acknowledges both her way of life and her own free will at the very same time. And the finale itself, accomplished entirely through expressions that tell the story’s end – a move contested by the studio until Weir was able to convince them that, if he’d done his job well up to that point, no words would be needed.

The train takes me from New York down to Philadelphia, and then over into the area where I was raised—incidentally, the same train route that the Amish mother and son take on their way to Baltimore near the beginning of the film. I always think I’m going to get some reading or rewrites done with all this free time, but I inevitably find myself staring out the large windows instead, watching everything go by, the way I once did as a kid. Some of it ends up on Instagram, vistas of blue skies and farmland that sit on my profile next to shots taken of my goings-on in Brooklyn. Someone always comments: “Whereare you?”

That feeling from the station continues to grow as the scenery changes, the sharp grays of the city giving way to the organic greens and browns of the country. I find myself transitioning into a different mindset, a slower, more contemplative state.

I now tend to think of the area where I grew up as being off the beaten path, but as a kid it seemed like the center of the universe. The land stretched out endlessly in every direction, touched by purple sunsets in the west, all of it highly impressionable to a young mind. This expanse not only proved to be excellent for childhood dispatches into the wilderness, it also carried with it a distinct sense of possibility. As the years went on, this feeling grew into a fervent desire to escape and move on, but, in retrospect, I can see it was a nurturing place for me, one I had to break away from to more fully appreciate.

Clearly these sorts of musings are a product of transit, a sense of being in-between that allows for wandering reflection. But I now find that returning home holds more than just a feeling of nostalgia. It also generates a greater sense of exploration and discovery.

Watching Weir’s sequences of agrarian Amish life play out over Maurice Jarre’s ethereal synth score, I’m struck by a strong sense of comfort, seeing the world I knew as a child but also feeling astonished at the way Weir is able to elicit a surreal otherness from the land, its people, and their ways. Like certain tonal elements in Weir’s earlier Australian work, Picnic At Hanging Rock, it is both beautiful and haunting, an unlikely companion to the more conventional Hollywood plot elements that come into play once the city of Philadelphia and Ford’s character enter the film.

In what is probably my favorite scene, the Amish grandfather sits the young boy down at the table where Book’s gun and bullets are laid out, and the two discuss violence and the taking of life that a gun represents. It’s a pinnacle moment, one that finds Weir fully prepared to tackle the themes he’s been setting up all along, highlighting the differences between these two conflicting cultures. “What you take into your hands, you take into your heart,” the old man tells the boy. It’s a message that’s especially chilling today given more recent events, and, for me, can’t help but bring up memories of the mass shooting several years ago at West Nickel Mines School, an Amish one-room schoolhouse in Lancaster where several children were wounded and killed. Afterwards, in the face of all this senseless horror, the Amish families of the victims offered forgiveness to the family of the deceased shooter, the two factions ultimately finding a kind of consolation and peace between each other. This kind of reconciliation was almost as difficult to fathom as the violence itself, but it speaks to the depths of love and forgiveness we are capable of in the times when it’s most needed.

There’s no doubt that the dichotomy between where I grew up and where I live now has become quite pronounced. A childhood friend (who also moved on from early pastoral roots) commented on one of my Instagrams: “Hello to the other world.” And she was right to call it that. In some ways it is an entirely different way of life, old-fashioned, out of step with the times. Sometimes it feels as if these two worlds really do represent the past and the present—tethered by tracks, roads, fiber optics, and childhood memories—allowing us to travel back and forth at will.

Of course, it’s not really about time travel so much as it is about what we choose to leave behind and what we choose to keep and carry with us. In years past, my trips home meant mostly the same thing as they would mean to anyone who goes back: warm meals, free laundry, a chance to kick back, turn off, and take in all those old amusing irritations that we once so boldly left behind. But now, many years later, going home has become a healthy, substantial reminder that life is not short (if we’re lucky)—that it is long and complex and requires the things that all families require: endurance, patience, and selflessness. These realizations are often easy to misplace when life throws at us its various distractions, but that’s all the more reason to try and hang onto what truly matters.

Or at least that’s what I’ve come to decide, taking train rides into the country.

Alexander Newton works in distribution for independent film and is a freelance video editor for companies such as Vice and The New York Times. He lives in Brooklyn where he is currently finishing a draft for his first feature film.