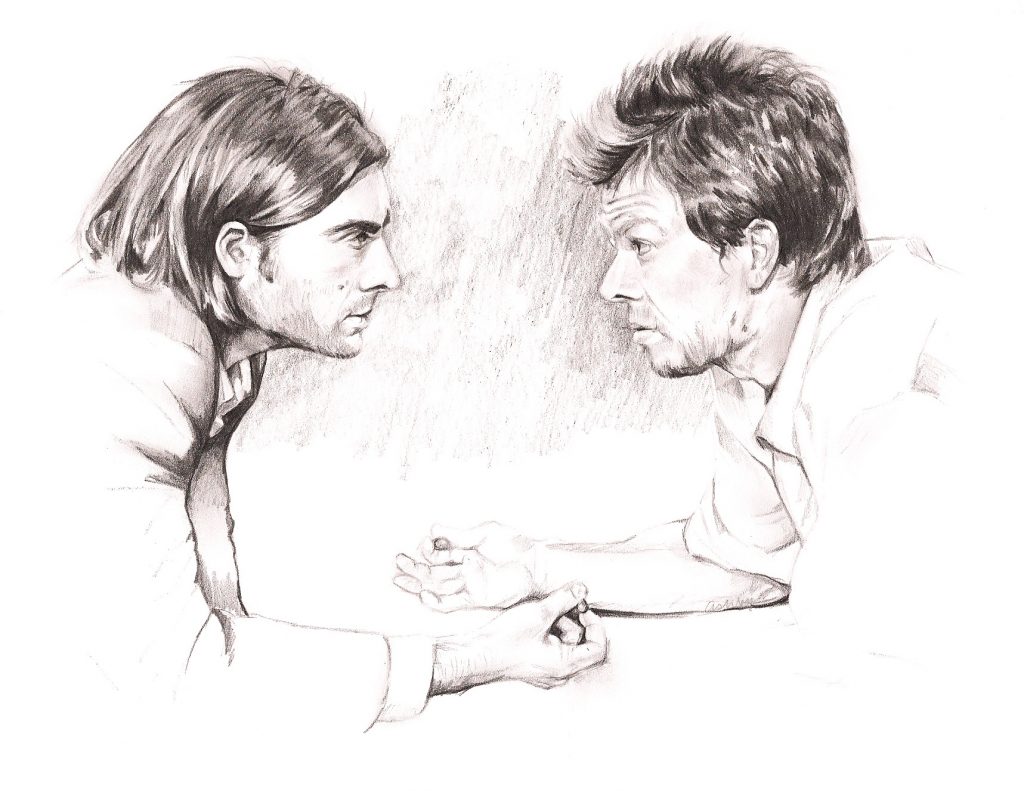 illustration by Brianna Ashby David O. Russell has had a busy past few years. Following a six year hiatus from making movies—a self-described “lost” period for the director—he emerged in 2010 with The Fighter, and followed it up quickly with Silver Linings Playbook, both of which garnered major accolades, including a couple of Oscars. His latest film, American Hustle, looks poised to do much the same. Russell has established himself as one of the most interesting directors around, able to get spirited and precise performances out of his actors. His films are loud and strange, his characters are louder and stranger.

It’s very easy to think that Russell’s latest works are wildly different from his older pieces (Spanking the Monkey, Flirting with Disaster, Three Kings). They’re less quirky and “more Oscar bait-y,” some would argue—pandering to critics and mass audiences—but the truth is a bit more complicated. I watched American Hustle and I Heart Huckabees in the same week.American Hustle is beautiful: the costumes are wonderful, the cinematography is stunning, and the whole thing is set to a rolling 1970s soundtrack. I Heart Huckabees, the last movie Russell made before his directorial hiatus, is an ugly movie. Its characters are weird and unsettling. The pacing is inconsistent and the dialogue is choppy. And yet, it feels like each of these films could not exist without the other.

In American Hustle, Christian Bale’s character Irving Rosenfeld asks, “Who’s the master: the painter? Or the forger?” I liked American Hustle, a lot. It was wonderful to watch and entertaining as all hell, although I’m also not quite sure there were ever really any stakes or if anyone was ever being honest about anything or what was truly supposed to be important. Critics and viewers are about as split on Hustle as they were on Huckabees—some loved it,some hated it, some wondered what the whole thing meant anyway.

I Heart Huckabees, which feels like a precursor of sorts, asks the same kind of questions like, “Why is this important?” or “What does it matter?” or “Which version of ourselves is the most honest?” It deals in binaries: real and fake, corporate and environmental, business and poetry, ugly and beautiful. And if I’m making this all sound more complicated than it is, then I’m really only beginning to capture the essence of I Heart Huckabees.

The story driving I Heart Huckabees is relatively simple. Alfred, a young environmentalist played by Jason Schwartzman, is unsettled by the path his life seems to be headed down and also finds himself running into the same stranger several times. The stranger, as it turns out, has little to do with it. Alfred is plagued by the thought of a young corporate executive named Brad (played by a spectacular Jude Law, functioning at his highest level of “douche”), who is slowly manipulating Alfred out of his own environmental group, Open Spaces, in order to get access to marsh to build a brand new Huckabees store. Brad has everything Alfred seems to desire: a purpose, a can-do attitude, and a gorgeous model girlfriend, Dawn, played by a very funny Naomi Watts.

In his confusion, Alfred seeks out two existential detectives—a couple, Vivian and Bernard Jaffe (Lily Tomlin and Dustin Hoffman, respectively)—to help him find out what it all really means. The detectives subscribe to a romantic type of philosophy, one they call “universal interconnectivity,” a belief that everything is connected and all of it matters. Through the Jaffes, Alfred is introduced to his “Other,” a firefighter named Tommy (Mark Wahlberg). Tommy is both confident and vulnerable, physically strong but sensitive. (If it sounds like the character might be a bit of a joke, it certainly had every bit of potential to be, but Wahlberg does such an excellent job that, in the end, it’s not.) Tommy is also a client of the Jaffes, but he’s grown frustrated with their techniques. As a result, he seeks out a rival detective/philosopher, Caterine Vauban (Isabelle Huppert), to find some counter-philosophies. Vauban sends Tommy’s life—and in turn, Alfred’s, and in turn, Brad’s, and then Dawn’s, and so on—into a spiral of chaos. Eventually, they all come out on the other end, a little confused, but also feeling a little bit better.

If you’re not well-versed in philosophy, I Heart Huckabees does a fairly good job of parsing it down. On one hand, there’s the Jaffes’ school of thought: universal interconnectivity, all of it is important, everything is connected, and we all matter. And then there’s Caterine Vauban’s philosophy: everything is chaos, nothing is important, and none of us matter.

It’s everything or nothing in I Heart Huckabees—except for when it isn’t. (Get it?)

To say I liked I Heart Huckabees would be lying, but I didn’t dislike it either. It pushed me and pulled me around. I found parts of it brash and out of control; other parts—particularly Tommy’s entire subplot—were kind-hearted and sympathetic towards its characters. On the whole, no one in the film is particularly likable or sympathetic, though; you can despise Brad for falling into the corporate, yakkity-yak scene (repeating the same horrifying anecdote about Shania Twain for every client), but he’s no worse than mopey, selfish Alfred.

There’s a similar dichotomy presented in American Hustle. In theory, we shouldn’t like Christian Bale’s Irving all that much: he cheats on his wife, he’s a criminal, he’s self-obsessed. And yet, we’re no more drawn to Bradley Cooper’s Richie, despite his honorable charge. They’re one and the same: obsessed, driven men who have crossed paths and now find one another in each other’s way.

So to say that Russell came back from his almost five year hiatus to make completely different films is, quite frankly, untrue. The films he made before and after are different, certainly. They’re more polished and a little more harnessed. But The Fighter, Silver Linings Playbook, and American Hustle all possess elements of that same madness that seemed so key in earlier Russell films. They’re still loud and ugly at times, just in a glossier way.

While Russell hasn’t necessarily dealt in philosophical comedies since I Heart Huckabees, his protagonists still ask themselves the same questions. They’re all about identity and binaries. Who are we?

Can we look out for ourselves and still be good, crook or lawmen alike? (American Hustle.)

Can we maintain our identity and still be a part of the machine, poet or businessman alike? (I Heart Huckabees.)

Are we an extension of our family or do we make our own families? (The Fighter.)

Are we crazy? Are we not crazy? Wait, is the whole world actually crazy and we’re the only sane people in it? (Silver Linings Playbook—though, to some extent, all of these films.)

Russell was allowed to feel a little lost after I Heart Huckabees. I don’t think he was the only one. The thing is, Russell’s still doing what he did back in 2004 today—he’s just doing it with a bigger budget and a better soundtrack, more lipstick and sparkles. He’s still shouting and twisting and turning. I Heart Huckabees laid the foundation for his past four years of smart, funny, and occasionally heartbreaking films. Making Huckabees meant everything to Russell’s career. Or, he was always going to go down this more prestigious path anyway and I Heart Huckabees doesn’t really mean anything at all. Or maybe—you know what, never mind.