I’m Floating in a Most Peculiar Way 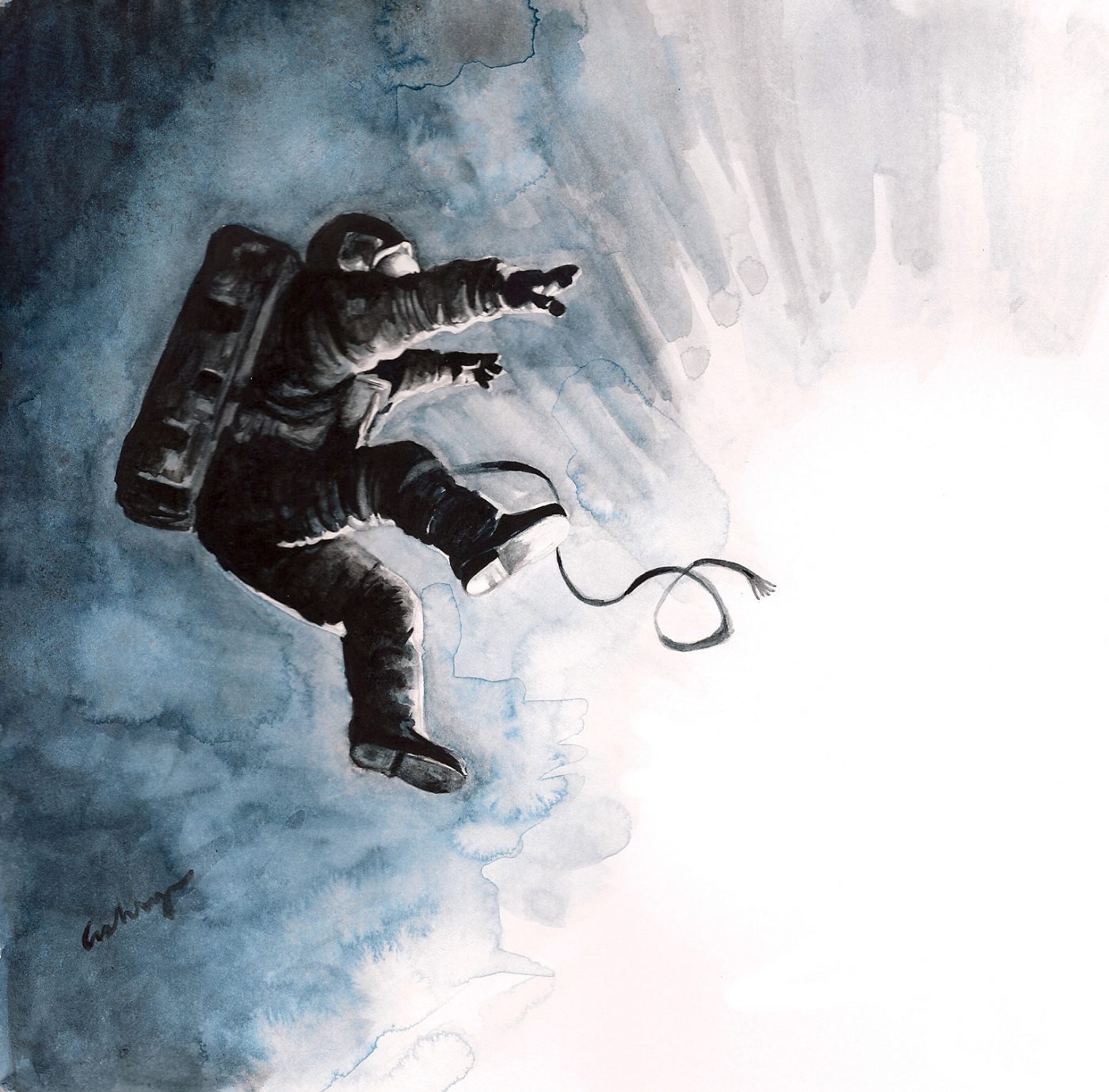 illustration by Brianna Ashby
When I was six years old, my grade one teacher sat the class down in a circle and told us about outer space. It was March of 1989, and the Discovery space shuttle had just been launched, three years after the disaster of the Challenger. We had a lot of questions.

“Why are they going to outer space?”

“How fast does the rocket go?”

“What do the astronauts eat?”

Caught up in the enthusiasm of this brave new frontier, I threw my hand up in the air and asked “What’s it like in space?” The circle fell silent, and we all leaned forward, waiting to hear what my teacher would reveal.

“No air?” I asked. How could there be no air? Air was everywhere, duh.

“That’s right,” she continued, “and because there’s no air in space, the astronauts have to wear special suits with the air caught inside of them.”

“What happens if they take the suits off?”

“Oh,” said my teacher, furrowing her brow, and leaning forward to underline the seriousness of what she was about to say. “They can’t do that. If they take off their suits, all of the air gets sucked out. If you were in outer space and your glove fell off… you would die.”

The only other thing I remember from that day is standing outside at recess, short of breath, desperately trying not to look at my gloves. It was winter. My gloves fell off all the time. Was life really that fragile? I didn’t understand a thing about death. My family’s beagle had died two years previous, and all that meant to me was that she wasn’t there any more. Death was not being—the bright, cold winter sunlight, gone. The clouds of warm breath coming through my scarf, gone. The sounds of my classmates playing tag, the loud school bell, lining up to go back inside—gone, all gone, and there was nothing I could do about it because my glove fell off and I was gone too.

“Houston, I have a bad feeling about this mission.”

My hands are shaking right now. My neck is tight and I keep forgetting to breathe. Between the last two paragraphs I had to walk away from the computer for an hour because I couldn’t calm down. I think it was an anxiety attack.

When I bought my ticket for Gravity, I felt a low-level prickling of the skin on my back. In the first ten minutes, as George Clooney and Sandra Bullock floated around the screen—and partially into the audience, thanks to the 3D effects—I was calm but wary. The enormity of the planet loomed quietly above them as Clooney’s Matt Kowalski flitted this way and that on a pneumatic jet pack, and Bullock’s Ryan Stone worked carefully on a piece of machinery, her voice thick with tension, her clear discomfort a dark mirror of Kowalski’s serene nature. I identified closely with Ryan – a relationship I would regret as the film progressed. Rogue satellite debris tears across their orbit, destroying the space station and cutting Ryan’s tether, setting her hopelessly adrift into the blackness of the yawning void. Spinning dizzily, her frantic breath quickly depleting her oxygen, she carries us with her as the Earth whips in and out of frame. Then, in a moment that realizes a deep and terrible fear, the camera detaches and we watch her momentum carry her into the blackness.

I’ve experienced blind panic—the kind that seizes your entire system—only once before. I was exploring a national park near my town called Warsaw Caves. As the name would suggest, there are a series of subterranean structures that hikers are free to explore, extending as deep at 40 feet below the surface. I was following my brother down a crevasse when we came to a tiny opening that we had to crawl under. My brother, the slimmer half of the spelunking duo, slipped through with relative ease, and so I followed… and got stuck. It quickly became dark in the cave, the only source of light shrinking away as though being pulled through a huge tunnel. The rock ceiling dug into my back and my chest was pressed to the ground. I couldn’t breathe deeply, and my arm was caught beneath me. Couldn’t go forward, couldn’t go back. Trapped. My breathing turned into ragged hacks that couldn’t carry oxygen into my lungs, and sweat burst out of every pore of my flailing body. It took intense mental effort to form the word “help.” I couldn’t see anyone.

No one was there to help me.

Panic is different from fear. Panic speaks to a sudden loss of control (ironically exacerbated by wild attempts to regain that control), while fear stews itself in dread and is often accompanied by an unacknowledged reverence. The panic I felt as a child was triggered by an entrance into something unknown. When my grade one teacher told me how easy it was for life to slip from my fingers, she revealed the universe’s vast indifference toward me—toward human life in general. When I was trapped in cave at ten years old, I panicked because I was being hurtled into that great indifference and there was nothing I could do about it. Panic is the agent, fear is the consequence.

Gravity provoked in me the strongest sensation of panic that I’ve felt in twenty years.

Ryan Stone fears death in all its forms. Her daughter died by complete happenstance, tripping and hitting her head during a game of tag. “Stupidest thing,” she intones, being towed behind Kowalski, helpless even when rescued. She has fled literally as far as she can to avoid fully confronting her fears, living a shell of a life in which she wakes up, goes to work, drives her car until she can’t stay awake any longer, and goes to sleep. While she fears death, she might fear life even more. The chaos of the universe took her daughter away so dispassionately that she has a victim’s mentality: keep your head down. Don’t let them see you sweat. You’ll be okay if you can only avoid eye contact. Throw yourself into work, a project, something, just don’t ever, ever, ever, let them know that you’re weak. That you’re hurting. That you suffer.

“You have to learn to let go.”

Life in this idiom is not life at all; it’s surviving—and life has to be about more than just survival. Director Alfonso Cuarón (who also wrote the screenplay with his son, Jonas) has crafted a story that charts the process of recovery, from denial to confrontation to acceptance. The chilling use of 3D to create an infinite depth of space—and to allow debris to cut right in front of your face—accentuates our protagonist’s sudden confrontation with the deep, dark fears that haunt her; just as she can’t fathom the tranquility that her co-astronaut displays with his penchant for twangy country music and flirty conversation, she also can’t fathom herself ever being comfortable with her seemingly infinite emotional shit. The only solution is just to keep moving away from it all. But as she travels from set piece to set piece, Ryan undergoes a process of rebirth; from a peaceful—though temporary—incubation aboard the International Space Station, to a painful process of pushing through the atmosphere, to the first shaky steps on uncertain legs into a strange new world, Ryan comes to terms with living. She’ll either make it through and have one hell of a story to tell, or she won’t—and that’s ok. The important thing is to seize control when you’re able to and live life unafraid.

I forced myself to go and see Gravity twice in the theater. Each time, the scenes of the debris attacking the space shuttle and Ryan’s subsequent careening through space made me grip the armrest so tightly that I nearly ripped it off. As soon as I’d heard about the film, I knew I was going to attend—I knew it would provoke a deep-seated anxiety, but I went to see it anyway. I don’t hold myself in esteem because I went to see a movie, but I do feel some small sense of pride that I confronted something that I’m deeply afraid of, in however removed a capacity. Admittedly, I feel a chill when I watch Chris Hadfield covering David Bowie’s “Space Oddity” in zero gravity, but I still make myself watch it. I’m slowly chipping away at age-old fears, and every time I do, I open myself up to wonders I can’t even imagine. It’s okay to be helpless sometimes. Planet Earth is blue, and there’s nothing I can do. But it’s a beautiful shade of blue, isn’t it?