Of a Thing Which Could Not Be Put Back 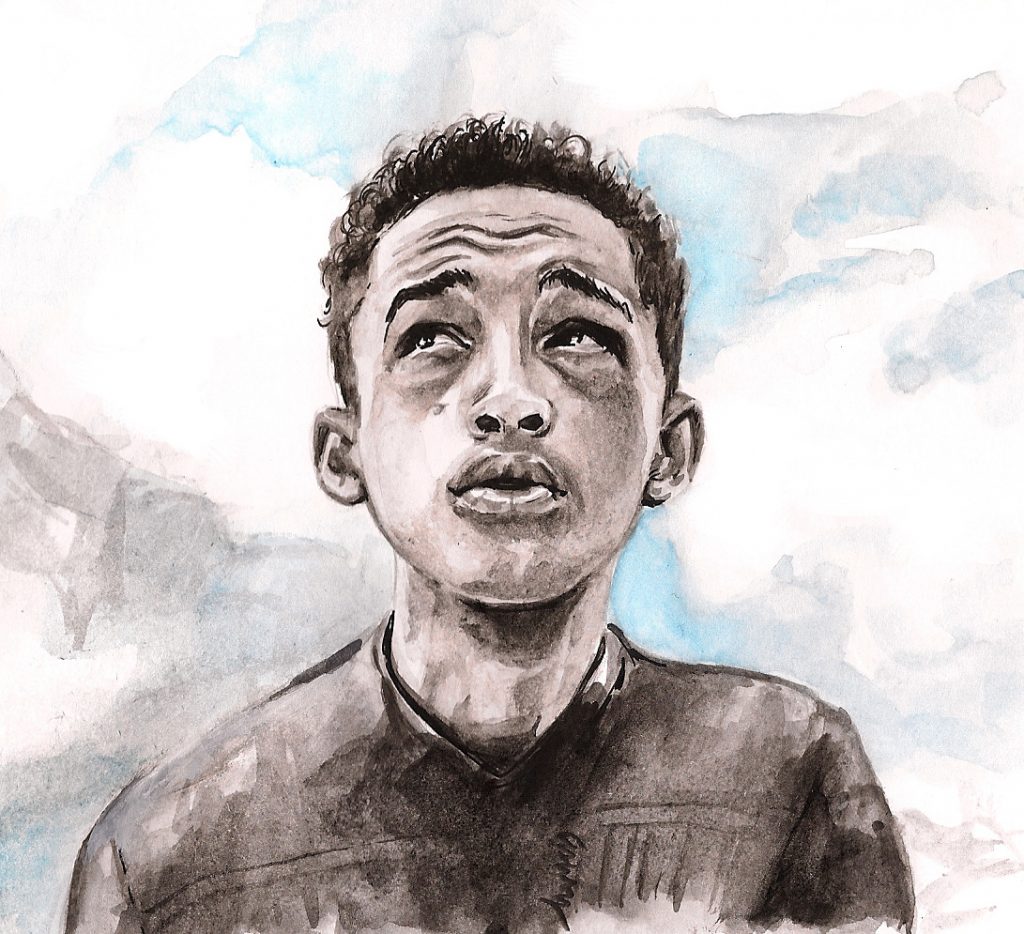 illustration by Brianna AshbyEnd of the world cinema—especially those films concerning long sad uninhabitable stretches of the smoking globe, those films that ironize the plight of overpopulation by emphasizing a vast reduction of humankind—have about them the glamour of the chosen few. 2013 was a good year for the chosen few, though a moment of global austerity—loan defaults, collapsed currencies, prolapsed markets, civil wars, insolvency of every stripe—seems to have capped a bit of the gilding, at least so far at it touched disaster movies. Our heroes in After Earth and Oblivion, two of this year’s most perplexing fare (in a year crowded by brainier, brawnier crowd-pleasers like Upstream Color and Pacific Rim), were sober and sad, and wore mourning garb. This bleak finery was all for Earth—for its extended funeral, played out in the year’s sci-fi spectacles.

Katai in After Earth (Jayden Smith vamping as a kicked puppy) wears camouflaging neoprene and kevlar; his father, Cipher (Will Smith acting like a very disappointed dad), wears a pilot’s uniform that fits like Body by Calvin Klein. Their garments self-repair rends, hold hidden wings, and monitor vital signs. These uniforms complement the fact that their wearer’s actions in the film are guided by an ascetic renunciation of feeling. An Ursa—a kind of bear-insect hybrid—is on the prowl, and the only way to avoid its detection is by mastering ones fear, entering a trance-like state known as “ghosting.” Critics and click-baiters have made much of After Earth’s philosophical indebtedness to Church of Scientology teachings, but the movie could just as well be a Puritan allegory with its insistence on labor, fear, and modesty.

M. Night Shyamalan directed, so the movie’s climax has a wondrous uptick in its last fifteen minutes; the film’s Hitchcockian bottom drops out, the measured stateliness gives way to a kind of math rock punch, and Katai hauls off on his demons. I recognize that After Earth is not a “good” movie, but I remain very taken with the wild way it depicts our future planet. Alpine forests, fanged leeches, eagles as big as Volkswagens—Shyamalan sometimes succeeds and at other times completely fails to integrate the ferocious CGI animals into the prelapsarian backgrounds, a defeat that feels somehow true and humane in its depiction of a perilous ecology. (Think of the digital wolves in The Day After Tomorrow or the bioluminescent caribou in The Last Winter. Computer animation is simultaneously a talisman against nature and an attempt to magick nature back to a pristine and cunning condition. Think Avatar. Hell, think Wall-E.) As a fantasia on the world after men, Will Smith also makes sense as a casting choice. There is poetry—a mystifying, internally consistent logic—in a cinema that counts Independence Day, I, Robot and especially I Am Legend as the starry, super-financed, B-grade sci-fi of our time, with Will Smith somehow saving the world in each. But we are inured now; we can leave behind the glassine highrises, the androids, the insane supercomputers. We can leave the earth behind. We can imagine bringing our sons back to the scene of our crimes, and siccing them like dogs again on the terrain.

“There is poetry—a mystifying, internally consistent logic—in a cinema that counts Independence Day, I, Robot and especially I Am Legend as the starry, super-financed, B-grade sci-fi of our time, with Will Smith somehow saving the world in each.”

After Earth, with its wholesale remake of an abandoned planet, suggests very neatly what critic D. N. Rodowick calls CGI’s “digital will,” or animation technology’s tendency to remake the world. In his essay “21st Century Cinema: Death and Resurrection in the Desert of the (New) Real”, J. Hoberman uses this idea to assert a paradigmatic shift in cinematic concerns: a “new real,” “post-photographic,” and “post-human” cinema. Neither Rodowick nor Hoberman suggests a “death of cinema,” however, it is difficult to uncouple their observations from the fact that the indexical nature of film (light reacting on a chemical emulsion, thereby imprinting an ontological reality onto the strip) will be a novelty in a generation. More striking to me is an essential irony in their discussions: digitally willed cinema takes as its special provenance the disaster movie and science-fiction. It attempts to imagine a world remade without humans. To more harrowingly, more faithfully, and more viscerally, show the end of us and the great success of our absence. If, as Paul Virilio advanced, the history of warfare is the history of speed, the history of cinema is likewise the history of our erasure from its images. The idea of a film without actors (or acting) could be one joke made at the expense of After Earth, but I think this film and Oblivion’s limited casts and widescreen landscapes are redolent of a quality far less funny. They portray an anxiety that advocates our demise. No more chosen few.

Because, in addition to routing us from screen time, the digital will also seeks to show a verdant paradise. The future in After Earth and Oblivion—limp, liminal, sparse—looks both lush and irradiated in these films: the bare shoulders of smoking mountains roll into impossibly fertile tundras, and rivers trek to the sea and fan outwards, as ravishing synecdoches for the blood paths in our bodies. The landscape has long been one of the outsized antagonists in sci-fi of this ilk, where substitutions for future topographies are played off existing places: Iceland, Appalachia, the Gobi. One of cinema’s responses to climate change (the large-scale and irreversible manmade destruction of the environment) has been to recast the world as villain—to show us, in some dumb way, there, we were right all along to rape its seas and poison its soils and obliterate its biomes, because Earth has had it in for us since we crawled up on its shores. Earth has had it in for us. (Pompeii, exploding on screens Spring 2014, qualifies for this thesis.) But the tide has changed (and so quickly, since last year’s 2012). Whether we like it or not, we were all drafted under the surfeit of green products, our faces lit under eco-friendly bulbs, readying ourselves for the culinary revolution in fried bugs. The lateness of our arrival accounts for the lateness of cinema’s own. Katai and Cipher are marooned on uninhabitable Earth almost as Earth has become a distant memory (the planet’s atmosphere is toxic and the werecats have pretty much become an impossible infestation). They arrive after irreversible damage, a cataclysm that fully warns away human return, and though the world is dangerous it remains numinously beautiful, an object for spiritual contemplation and ritual mourning.

Joseph Kosinski’s Oblivion assumes a similar sacerdotal air. The film’s score, provided by M83, is sweeping and elegiac, a two-hour dirge embalming its images while enhancing them. The images are monochrome, timeless—or they exist in the dolorous haze of ’50s paranoia, like an Apple Store in an episode ofThe Twilight Zone. I haven’t made up my mind. Tom Cruise—playing an iteration of his previous roles in Minority Report, War of the Worlds and Jack Reacher—has about his person another fine, cream-colored jacket, as neutral as the rest of gray Earth in the film, where our cities are worn to pebbles. His sometime-bride, played by Andrea Riseborough, wears a sacral smock and has perfect hair in the morning. They wake as from a dream, into an eternal balmy day, high above the planet, alone together, like princesses in a tower awaiting the right kiss to restore them to their former glory. They come lately to the planet, too—sleeping while a grave, techno alien menace annihilated humanity and drove survivors underground. The aliens want our oceans, and they park their tetrahedron-shaped space-ships above gorgeous seashores and begin to suck the sea away, for use as fusion fuel. That these envoys of the digital will want our oceans resonates, again, with the devil’s compact between CGI and nature, the non-negotiable fact that, excepting a revolution in 3D printing, the world will not be remade in the likeness of Photoshop touch-ups.

This disappointing reality is interrogated at greater length, and with more sensitivity to its cold, hard answers, in Kosinski’s first feature, Tron: Legacy. Of course, Legacy borrowed a strict and totalitarian visual schema from its early ’80s predecessor, Tron, and then expanded on the limited palette of colors and forms. The world inside Legacy has all the poise of a Japanese rock garden, a motif Kosinski dilates throughout the film, but it is inherently pastiche, bound to its predecessor’s forms, an innocent and inert cyberworld predating Simulacra and Simulation and The Matrix. We know that zen gardens symbolically extrude chaos and order from their materials, from the raked rocks, the little pools stocked with blood-red koi, and the only apparently withering bonsai. We know that zen gardens are reticent, and that reticence must be their appeal. Maybe zen gardens even effect some harmony in visitors. Still, most ofOblivion resonates at a zen frequency, and so much of it looks like a rock garden—gravel, bones, the serenity of barren hills and dells—but the object of inquiry is not harmony, or the materiality of a natural order whose elements are arrayed pleasantly for the poetic imagination, the reflective sigh; instead, they suggest erasure and extermination. Forest dells provide relief from this hellscape. BothAfter Earth and Oblivion rely on conifers—spruce, fir and larch—to assert an idyll reborn. The protagonists swan through Christmas tree groves, pad over pine needles, before climactic showdowns in plain scorching day.

Both films were largely shot in 4K resolution using Sony’s CineAlta F65 camera, as if to anticipate our fascination with the clarity of rocks and pine cones, icy vistas, volcanic ash fall, golden sunsets, skittering fauna. This log of the natural world, in such stunning high definition, makes good on the essentially valedictory premise of disaster movies. Cormac McCarthy’s apocalyptic novelThe Road ends with a similar invocation:

Once there were brook trout in the streams in the mountains. You could see them standing in the amber current where the white edges of their fins wimpled softly in the flow. They smelled of moss in your hand. Polished and muscular and torsional. On their backs were vermiculate patterns that were maps of the world in becoming. Maps and mazes. Of a thing which could not be put back. Not be made right again. In the deep glens where they lived all things were older than man and they hummed of mystery.

In the frames of After Earth and Oblivion (as in the words of McCarthy), we are not imagining the future. We are, rather, projecting the past—an unrecoverable past from a corroding present—into omnipresent, depressing IMAX.

Susan Sontag, in her 1965 essay “The Imagination of Disaster”, noted how the disaster film “is concerned with the aesthetics of destruction, with the peculiar beauties to be found in wreaking havoc, making a mess.” She noted, too, that science-fiction movies provide “sensuous elaboration” for “the fantasy of living through one’s own death and more, the destruction of cities, the destruction of humanity itself.” The end of the world comes so often that even fifty years ago—the half-life of film’s existence as a medium, give or take—we were still running the same lines. Yet something has changed; the apocalypse is no longer absolute pandemonium. Disasters are less social now—they are more singular, serving-sized, individual: a father and son lost in the woods; a husband and wife high above the planet. The disasters befall us and abandon us, leaving us orphaned from our home world. Sontag finishes her essay with the famous declaration, “Ours is indeed an age of extremity. For we live under the continual threat of two equally fearful, but seemingly opposed, destinies: unremitting banality and inconceivable terror.” We could die alone. We could be the last of us. It’s boring and horrible, but the views are breathtaking, at least while they remain.

Evan Bryson is a writer from Indiana. He blogs at duckbeater.tumblr.com.