Everything I Know About Vietnam I Learned From The Movies 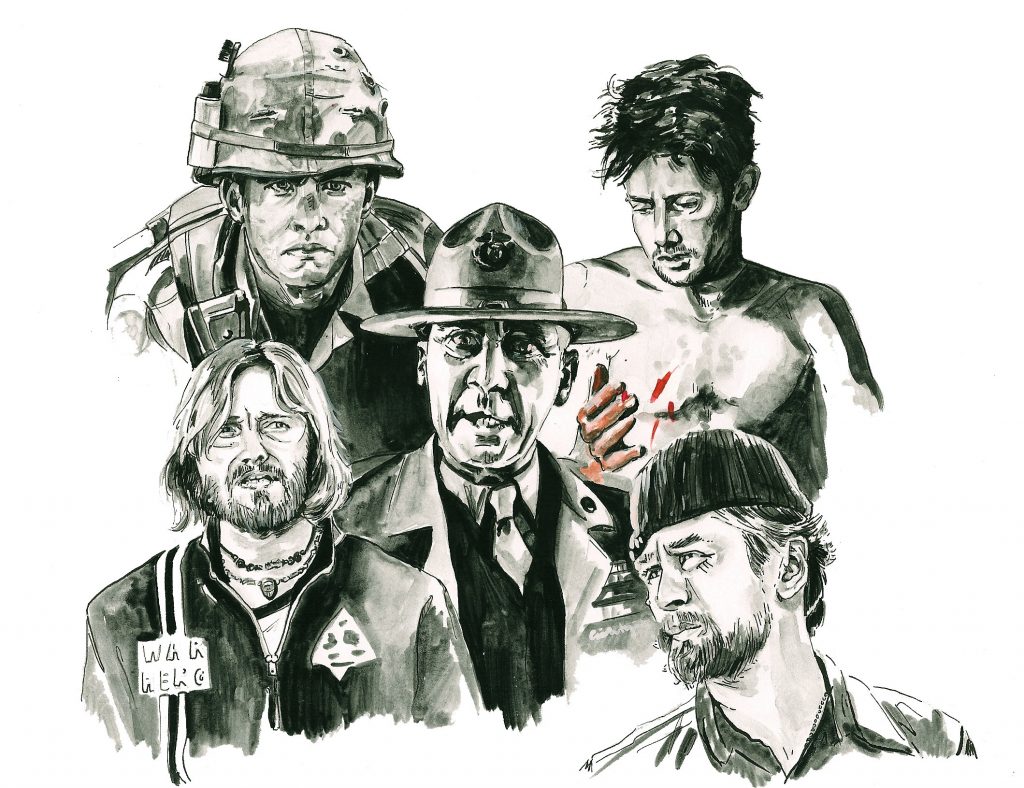 illustration by Brianna Ashby When I was in high school, I saw my Uncle Dick have a Vietnam flashback.

(Ok, that’s only partially true. For starters, he’s not really my uncle, and it wasn’t so much a flashback as it was a brief mental lapse. But stay with me here.)

We were on our way to dinner, all piled in the family minivan, and my dad and uncle were talking about their time in the Navy together (Dick was my old man’s CO, hence the “Uncle”). At some point in the ride, Dick asked, “Remember Đà Nẵng in ’69?” The van got quiet.

He didn’t say anything else until we got to the restaurant. Our server had blonde hair, and I ordered a steak.

Everything I know about Vietnam I learned from the movies. That includes my untested-but-not-unfounded theory that many Vietnam veterans would rather not discuss their time in Southeast Asia. Which is fine with me: I wasn’t going to ask anyway. I got my education elsewhere. Sure, I took the required American history classes in high school, as well as a course specifically on the sixties during undergrad, but those mostly just taught me how to cram two hundred pages of (immediately forgotten) reading and a five-page essay assignment into a single night. I could memorize some dates and names long enough to take a quiz, but after that, the information disappeared. My knowledge of the war remains roughly equivalent to Max Fischer’s when he wrote and staged “Heaven and Hell” at the end of Rushmore. It’s based in little actual fact, and colored completely by popular culture. Vietnam may have been the first Great Televised War, but the films about it are what define my understanding.

As a child of the nineties, the first movie I remember seeing that involved Vietnam was—what else—Forrest Gump (1994). I must have been eight or nine when I saw it (a little young, but my broad film education started early). I liked it as much as any kid would, I guess. I remember getting caught up in the shots of the helicopters flying over the rice paddies while “Fortunate Son” blared. This was Vietnam, I thought. Rock and roll, and machine guns, and sacrifice. I understand. I bought the double-compact disc soundtrack on a summer trip to Vermont, along with a used advanced promotional copy of “Nevermind.” I eventually realized that Zemeckis was just using Vietnam to inject some reality into a fantasy about a simpleton with very special timing. He was not crafting a serious consideration of the war.

The year before that, my family had gone to Washington D.C. We visited the Vietnam Memorial, and I stared quietly at the Wall. I bought a short, age-appropriate historical book about the war. Around that same time, I was permitted to start seeing (parent approved) R-rated movies. The Oliver Stone one-two punch of Platoon (1986) and Born on the Fourth of July (1989) were near the top of my most-desired list, as I’d learned they were the products of an actual Vietnam veteran. At that point, I craved authenticity. I had already outgrown Zemeckis’ by-the-numbers, emotional manipulation; I wanted to see what it was like in the shit. I watched those films several times as a kid, but aside from developing an early appreciation for Willem Dafoe, not much stuck.

By the time I got to high school, I started trusting myself with the American Masters. Stanley Kubrick’s Full Metal Jacket (1987) took a couple of viewings to wrap my head around. I found the lack of combat scenes early on to be a bit boring…until I realized that was kind of the point. I thought Vietnam looked too grey and blown out…until I realized that was kind of the point. (I later found out it was filmed in England, and they had the palm trees flown in.) Kubrick, having already made the great anti-war film Paths of Glory, brought his unique vision to a more contemporary war, one whose effects he’d actually been around to witness. He makes Southeast Asia something like an alien world, and basic training like astronaut prep (if astronaut prep also involved total humiliation). R. Lee Ermey’s performance as Gny. Sgt. Hartman ensured that I would never, ever enlist.

Apocalypse Now (1979) was love at first napalm blast. I’ve always found Coppola’s claim that his film “isn’t about Vietnam,” but rather “is Vietnam” to be ridiculous bullshit, but it sort of makes me love him more (that, and the fact that he essentially lost his mind and almost died making the movie). The film, like his statement, is larger than life, and it takes his vision of the war very seriously. It has pop music like many of the others—but instead of John Fogerty or Nancy Sinatra, it’s Jim Morrison’s nonsense and fuck noises over a naked, bleeding Martin Sheen going nuts in a boiling hotel room. “Saigon. Shit.”

The only way Coppola felt he could appropriately address Vietnam was by turning Joseph Conrad’s Heart of Darkness into the ultimate bad trip. Apocalypse Now cemented my vision of Vietnam as a nightmare in a different way than the other films. Yes, good men died: honest men, and friends, too. But in this version, there were former movie stars who got fat and bald and were waging wars of their own. There were men hanging from helicopters chasing Playmates, and shooting up boats because of puppies. There were fuckin’ tigers. None of the films made Vietnam look pleasant; Apocalypse Now made it look like Hell.

Michal Cimino’s The Deer Hunter (1978) and Hal Ashby’s Coming Home (1978) brought the war back to the States. They returned the broken men who’d gone off to fight back to hometowns and people that either held them up as heroes (usually to the soldiers’ discomfort), or couldn’t be bothered with them. Cimino used the war as a catalyst for unraveling what he was really interested in: the bonds between men, and the toll war takes on them.

One of the most striking scenes in The Deer Hunter isn’t in Vietnam, but back in Steel Country Pennsylvania. It finds Robert De Niro fresh off his tour and clearly out of sorts. Having avoided a welcome home party in his honor, and hiding out in a hotel rather than facing his friends, he finally goes to the local market with Linda (Meryl Streep). He is greeted by doting, smothering employees who nearly push him out of the frame. This isn’t an accident, and Camino’s camera doesn’t move to accommodate the actor: his back against a wall, he is surrounded by others, yet totally alone. Unable to communicate his pain (physical or otherwise) through the barrage of kisses and handshakes from those who couldn’t understand, he suffers the Veteran’s Curse. I had never seen this captured in film before, and I’d certainly never seen an actor in uniform portrayed as so totally vulnerable.

Hal Ashby, that great humanist hippie, eschews combat completely in Coming Home, and focuses instead on the conditions of the men who make it back from the war in various states of disrepair. The film deals with soldiers’ difficult readjustments to quote-unquote normal life. As one man says, when you get back home, “They don’t tell you anything about going back to society.” Ashby injects an otherwise simple love story with a biting social critique about the state of Veterans Affairs. The near-constant rock and roll soundtrack and romance between Jane Fonda and Jon Voight contrast—sometimes ironically—with Purple Hearts, suicide, and (like the Hendrix song) manic depression. Voight gets the big moment giving his speech in the gymnasium at the end of the film, but it’s the unhinged Bruce Dern whose line rings the most true: “How can they give you a medal for a war they don’t even want you to fight?”

Sometimes, when you’re faced with an event so massive, so unwieldy, so violent, and so incomprehensible, there’s nothing to do but try to mold it into something strange and lasting using whatever tools you have on hand. These directors picked up their cameras and tried to make sense with them. To focus their lenses not on dates or death tolls, geography or battle maneuvers, but on something far more elusive: the human element.

I know I’ll never fully comprehend the tragedies and complexities of Vietnam, but if movies can help me understand a man staring out the window on a silent car ride to a steakhouse, then I’ll keep watching them.