Issue 12: The End of the World

For the Unlikely Heroes of Apocalypse Movies 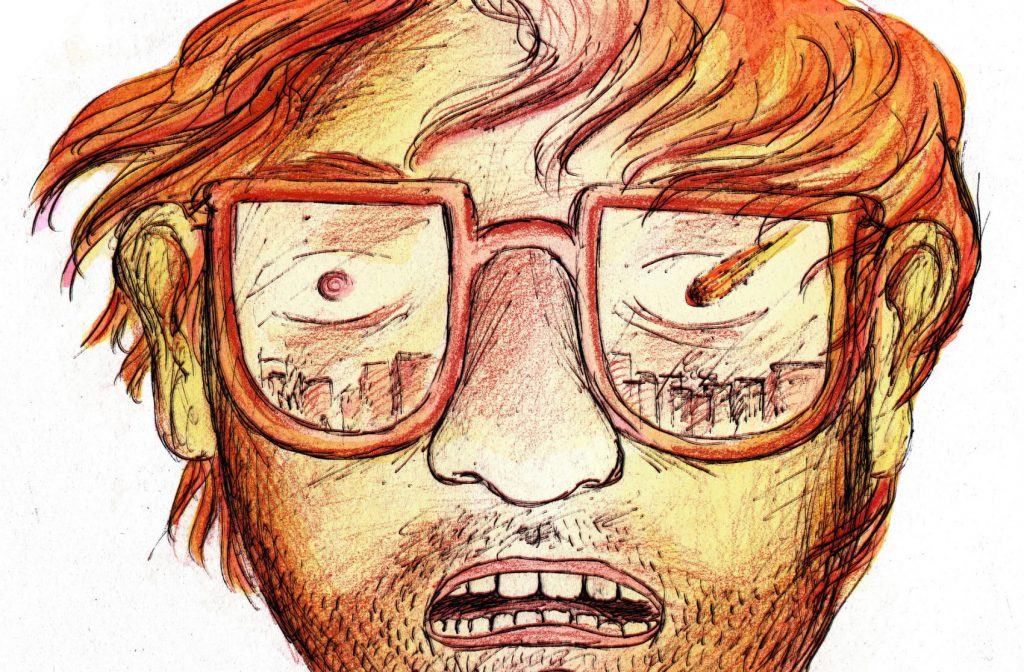 Thank God for the beginning of every global ending: toilet water flushing counterclockwise in the northern hemisphere, too much lightning or not enough wind, tsunamis littering beaches with the old plastic of dead jellyfish, birds flying rabid into European plazas, wolves dying of inexplicable disease above the permafrost. Thank god for the wolves and for their dying, because how else would our lowly lupine expert become The Only Man Who Can Possibly Save The World? We need to see him, every him—the humble analyzer of DNA, the quiet arborist, the loneliest ornithologist, the crypto-meteorologist in bifocals—we need to see each man close his laptop and take a bullet or an asteroid to the chest. Let him turn away from his swivel chair, throw off his lab coat, clutch his sheath of charts and surge forth into the gloaming. Let him sound the alarm. Let him rise into his mythos. Let him claim the junior high school that will someday bear his name.

Thank God for our crypto-meteorologist’s estranged wife and our lupine expert’s disabled son, because they will make our heroes men again. Let them be trapped by terrorists, buried by too much snowfall over the shelled ruins of iconic skyscrapers—let their peril drive our heroes onto snowplows, or speedboats, so they can ride over the frosted or flooded Eastern Seaboard while their sidekicks seduce the beautiful daughters of third-world presidents. Thank god for these fools’ errands. We would feel nothing without them. And thank you for the inscrutable and gratuitous technology that makes them possible: for screens that are played like pianos and keyboards that glow in the dark of the night, for computers that hold crawl spaces like circuit-studded stomachs—thank you for these spaces in which our crypto-meteorologist does the right thing or types the right code or maybe punches a shark in the face, if he has to, if a limb has been lost.

Thank God for the end of every world. May no ending happen too quickly. May the major cities of the world fall like dominoes in slow-mo: give us the leaning tower finally crashing into Pisa; give us Big Ben exploded and Cairo on fire; give us Tokyo businessmen fighting dolphins in the street. Give Manhattan to heaven and Los Angeles to hell. Give our meteorologist and his marriage a second chance in all the wreckage; give him a love that can withstand statistically impossible tsunamis and jellyfish strewn upon the sand like scarves and armies of brown birds flying straight from the white hot eye of the sun. Let his sidekick fuck that dictator’s girl at least once before the second meteor hits. Let their progeny start the colony on Mars.

But dear lord—in the end, at the last—please let the second meteor hit. Don’t deny anyone his junior high school. Give our secondary heroes their embryonic Eves and Adams. Let everyone fall into the asteroid chasm. Let everyone blister in the too-close sun. Let everyone perish. Let no one live.

Leslie Jamison is the author of an essay collection, The Empathy Exams, winner of the Graywolf Press Nonfiction Prize. Her first novel, The Gin Closet, was a finalist for the Los Angeles Times Art Seidenbaum Award for First Fiction; and her essays and stories have been published in numerous publications, including Harper’s, The Oxford American, A Public Space, and The Believer.