Growing Up with Bottle Rocket 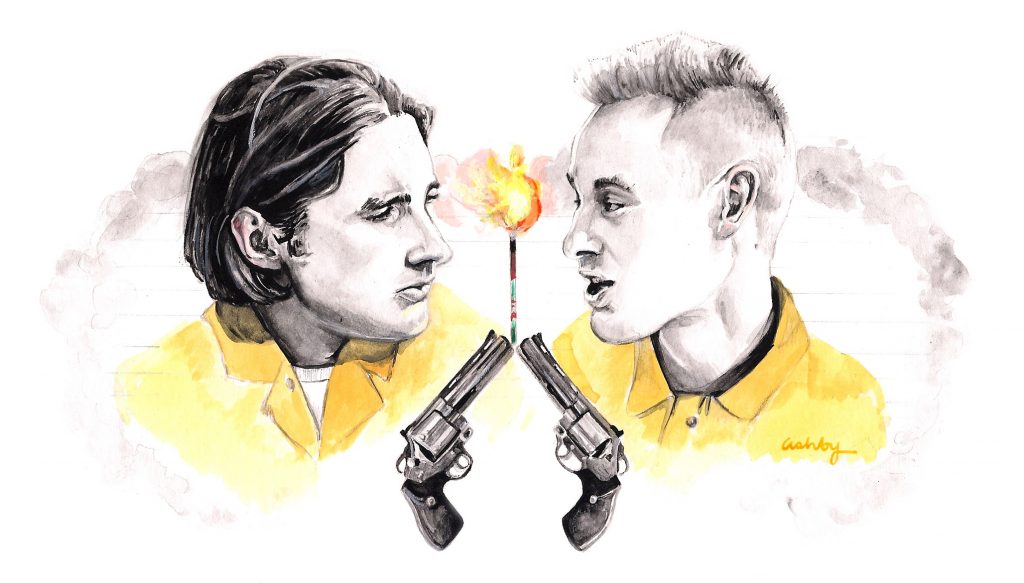 illustration by Brianna Ashby In 2002, my last year of high school, I worked in a local video store and dreamed of movies. The store was supposedly a single link in a smaller franchise chain, but I’ve never seen another of its kind. It wasn’t a particularly flashy place. That it has since been erased from the remote northwest Toronto strip mall that housed it feels fitting. I can drive past that plaza now, on the way to my parents’ house perhaps, and feel a tinge of nostalgia for something that once was. This is the unremarkable setting I conjure whenever I think back on discovering Bottle Rocket.

Wes Anderson’s debut film is an inauspicious introduction to a film style that would eventually be described, circularly, as “Andersonian”. Back in 1996, Anderson was simply working with what he knew: Well-appointed houses, an isolated motel, and a collection of bland suburban blocks buffeted by empty Texas streets. There is no majestic Indian train here, no listing boat; not even an ostentatious manor makes it onto the scene. Anderson had yet to cultivate his trademark style, his combination of symmetrically centred shots, ornate production design and generous dollops of whimsy. I try to imagine what it must have been like for James L. Brooks, the producer who first shepherded Anderson and company into the world of big time filmmaking, to see the finished movie and realize that a new, genuine voice had emerged. The technique may not yet have been full grown—and Bottle Rocket flopped upon its initial release—but its heart was always in the right place.

At its centre, Bottle Rocket is a coming-of-age story that resolutely does not want to come of age. The main characters, best friends Anthony and Dignan (brothers Luke and Owen Wilson, respectively), along with their reluctant third wheel Bob (Robert Musgrave), all look much older than the typical story should allow. These guys are post-college aged, still living within the orbit of their parents’ houses. When Anthony’s younger sister Grace remarks, “You haven’t worked a day in your life. How could you be exhausted?” we want to think “slacker”, maybe even feel a little self-righteously upset. Who do these layabouts think they are? But the film charms us out of this notion; these guys are just too innocent for that.

We meet Anthony as he leaves a mental institution, after an apparent wild sabbatical in the Arizona desert. Younger brother Luke’s jughead smile invites us in, a whole acting career soon to be mapped out underneath his haircut. Dignan arrives from a life of quixotic schemes, a world where he is the hero of his own action movie, a leader of men. Owen’s energy is infectious. He was 26 whenBottle Rocket came out, with a crew cut and an incredibly broken nose, but he may just as well have been 13. Early in the film Dignan flips through a notebook with five, ten, fifty-year plans. It’s a painfully sweet glimpse into an impossible adult world. For it to be realized the guys just need their criminal enterprise to take off. Every kid has to have a dream, right?

Somewhere in my own parents’ house there are boxes of notebooks and binders, collections of comics and cards. I didn’t have an army of regimented tin soldiers like Anthony’s, but I can marshal a flotilla of Lego if need be. I admit, my blueprints were never quite as elaborate as Dignan’s, my goals probably not as far reaching as Anderson’s, but the restless desire was there. Theirs is a guileless spirit harnessed both in front of and behind the camera, a reckless will to make oneself into something else regardless of what the world thinks. As a kid, I usually had to be reminded to pipe down, to remember that not everyone was as gung-ho about my enthusiasms.

The first job Anthony and Dignan pull off is a ransacking of the former’s parents’ house. We never question the ease of their entry until afterwards, when it becomes clear we’ve witnessed a mostly harmless robbery. They want to be glamourous bandits like the ones they’ve undoubtedly read about in cheap novels, or seen on TV and in movies. So, next, with an overly elaborate plan masterminded by Dignan—which includes bird calls and innocuous nose tape—the crew robs a book store, making off into rural Texas with what feels like a fortune (in tiny plastic book bags). The police don’t enter the film until the end, but the characters’ adolescence has already been arrested. Still, Anderson invites us to protect their fantasy. We know the real world is going to be hard.

Anderson and Owen Wilson met while studying at the University of Texas in Austin. They’ve said in interviews that the idea for Bottle Rocket, first a short film, was born after they had broken into their shared apartment. They wanted to prove to their landlord that the windows needed to be fixed. The landlord suspected it was an inside job.

I have no trouble imagining how difficult it must be to get a film made. For a gang of bemused Texans in the early 90s, even ones backed by Brooks, it must have felt like an impossible dream. Maybe I’m projecting. When you’re a teenager or grinding through university, the future begins to feel like it’s bearing down, like important decisions will soon be demanding your attention. At the same time, that life of impending adulthood feels so far away. I remember asking myself how I was supposed to go from part-time video store clerk living with my parents to fully-grown person with a career and responsibilities and, who knows, maybe even a girl on my arm. Young passion—for film, for books, for music—is powerful but directionless. My parents quietly guided me into practical career pursuits, the first step towards a real life.

Mr. Henry (James Caan) is the most powerful person in Bottle Rocket. He runs a landscaping business and has associates with colourful names. He wears a necklace made of animal teeth. He even has a private headquarters, a base from which he can host parties, play table tennis and practice karate. To an aspirant gangster like Dignan, this is his future. Sure, let Anthony have his puppy love with the housekeeper Inez, his comically naïve vision of adult life, filled with a morning paper route and youth soccer. Dignan will not wake up. He’d rather try to convince everyone else that his dream is real. Your heart breaks for him. Gradually, Caan’s presence tilts the film in a disquieting direction. He is the perfect stand-in for the deviousness of reality. How far, really, can innocence take our heroes when faced down by Sonny Corleone?

There’s that thing about confidence, the old idea that you just need to fake it until you make it. I see Anderson and Owen Wilson, summoned by Brooks to write a feature length film based on their short. I see the film bombing and Wilson giving serious thought as to whether or not to join the Marines. I see Anderson going away for a couple of years before returning with Rushmore and a new muse in Bill Murray. I see myself at my first real job interview. I wore a suit and tie and strained to project the feeling that I knew what I was talking about. I may have had a comic book in my bag to read on the way back to my parents’ house. I see Anderson working with his best pals and directing tough guy Caan in scenes that were written for fun, on a lark, a year or two before. Bottle Rocket is suffused with the spirit of, “Hey, this is so crazy, it just might work” enthusiasm.

Why is that tape on your nose? Exactly.

The final heist sequence features a sleepy, cold-storage facility and a robbery crew in yellow jump suits. Dignan has supplied walkie-talkies (including a headset for himself, of course) and binoculars. He’s in his element, as ridiculous as it may seem to everybody but him. That’s the thing about not knowing any better, you just don’t care. It’s remarkable watching these scenes now and seeing how ordinary they look. The drab walls and featureless offices of the building feel like they belong in a different movie. You think, “Wes Anderson directed this?” He chases Dignan and Anthony with a handheld camera. The cops that show up are not played by Edward Norton.

Bottle Rocket‘s great achievement, really the cornerstone of Anderson’s whole career, is present even without any bold flourishes. It’s in his un-ironic appreciation of genuine wonder, expressed in his characters’ heartrending desire for love and understanding. It’s there later in his filmography when Zissou admits that 12 is his favourite age, when Royal embraces his inner child, when the Whitmans shuck off their heavy baggage, when Sam and Suzy declare their beach the Moonrise Kingdom. But it all started with Bottle Rocket, the most unassuming Anderson film, the one deemed the least “Andersonian”.

Years later, in a segment with Roger Ebert, Martin Scorsese would call Bottle Rocket one of the ten best films of the 90s. He said, “I love the people in this film, who are genuinely innocent, more than they even know.” I like to believe sometimes that Anderson feels like he got away with something, like he broke into the vaulted world of Hollywood and decided to hang around. It is easy to believe that Scorsese saw Anderson as innocent, too.

I work in an office cubicle. I have a computer and file boxes and papers arranged across my desk. I think sometimes of where the old toys and notebooks in my parents’ house have gone. Sheepishly, I remember the time spent playing video games and drawing fantasy worlds, the neighbourhood clubs started and abandoned. I’ve become, as is the fashion, something of a cynic, or at the very least, a sarcastic person. Irony seeps into everything. High school, university, and the working world all taught me to keep my imagination to myself, to express a little embarrassment at my passions. I do have my own place, I’ve had a girl on my arm, but I never rode off half-cocked like Dignan, flaring out like a bottle rocket against the sun.

As Anderson continues to add to his filmography—we’re up to eight films now—the question is being asked more and more: Which one is your favourite? When posed to me, I often take a minute, maybe hem and haw about how Anderson’s style has changed and grown over nearly two decades now (geez, really?) The answer is always the same, though. I find myself at the beginning, with Bottle Rocket.

The other films can try, but they’ll never catch it, man, because it’s fucking innocent.

Daniel Reynolds is the editor-in-chief of The Same Page, a Toronto-based sports and culture website. He claims to be a dedicated municipal employee but spends most of his time writing, irregularly appearing on Global’s The Morning Show, and talking about movies, books, music, and basketball.