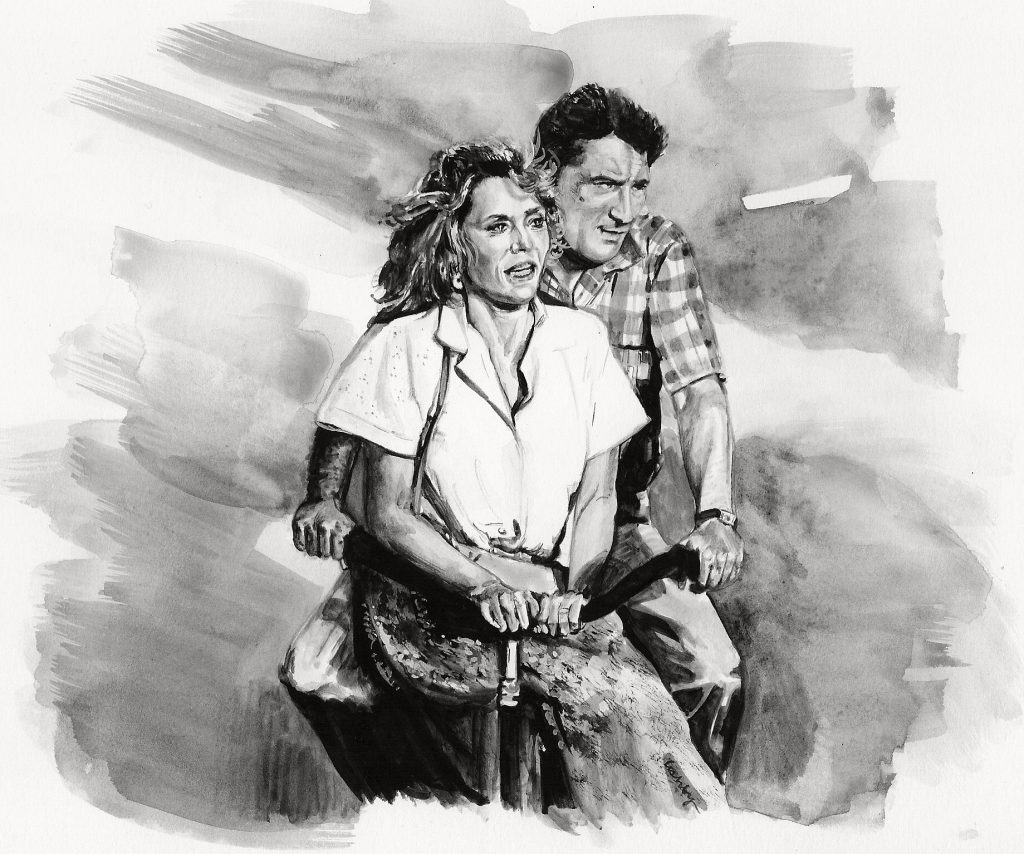 illustration by Brianna Ashby“Do you remember Stanley & Iris?” I asked my sister. Director Martin Ritt shot portions of the 1990 film—written by Harriet Frank and Irving Ravetch, and based on Pat Barker’s novel Union Street—in Waterbury, Connecticut in 1988. My sister was ten years old, so I must have been fourteen. We lived in Oakville, just northwest of Waterbury. I was finishing my freshman year at Sacred Heart High School, not far from the locations on South Main Street where Ritt filmed Jane Fonda as a factory worker and Robert De Niro as a man named Stanley Cox who loses his job when his boss discovers Cox can’t read.

I asked my mom, too, what she remembered of the film. The small protests in Waterbury against “Hanoi Jane” made national news. “Jane Fonda?” she said. “I like her workout videos.” Then she asked my sister, “What movie is he talking about?” But my sister, who now lives in Middlebury, Connecticut, instantly remembered the film and the controversy surrounding it. I asked her to watch the opening scenes on YouTube, and she sent me a long email with details of every alley and every building. That’s Pond Street. There’s Holy Land. I think that’s over near where the Home Depot is. But the Home Depot wasn’t there back then. I promised I’d send her the DVD.

Ritt opens the film with a long panning shot of Waterbury. As composer John Williams introduces a lush and majestic string arrangement to the score, we see interstate 84, a web of steel and concrete called (my sister reminds me) the Mix-Master. I see Waterbury Hospital, the clock tower. American high school students might remember the clock from Arthur Miller’s Death of a Salesman, as Willy Loman, home from another grueling trip, describes his visit to Connecticut. “Waterbury is a fine city,” Willy tells his son Biff. “Big clock city, the famous Waterbury clock. Sold a nice bill there.” It’s not clear in Miller’s text if Loman is referring to the clock tower or to the Waterbury Clock Company, which first made its name in the late 1800s manufacturing inexpensive pocket watches. When my grandfather James Cremins first arrived in the United States from Ireland in the 1920s, he eventually found work at Waterbury Clock.

When I watch Stanley & Iris, I see two films: a story about illiteracy starring Jane Fonda and Robert De Niro, and a second, more spectral one, a big-budget home movie of the city where I was born in 1973. I watch Jane Fonda and I see her character, Iris King, grieving over the loss of her husband and doing her best to keep her family together. I also see my maternal grandmother, Patricia Budris Stango, who was born in Lithuania in 1913, and I see her older sister, Anna (Budris) Grigoraitis. Just as my Irish grandfather worked at Waterbury Clock Company, my grandmother and my great aunt worked most of their lives at the United States Rubber Company in Naugatuck, Connecticut, just a few miles from Waterbury.

I can’t say Stanley & Iris is one of my favorite movies. It ends awkwardly, as Stanley Cox, having learned to read, finds success in Detroit. The irony of De Niro’s character leaving an East Coast mill town for the Midwest’s rust belt is both strange and poignant. Every time I watch the film, I’m emotional at all the wrong moments: not when De Niro discovers his father has died, or at the climax of the film when, about to leave for Michigan, Stanley finally tells Iris that he loves her. Instead, I linger over the film’s long opening shot, the camera slowly sweeping across South Main until we see a building that once housed the Waterbury Button Company. In Stanley & Iris, it’s called Nevins & Davis Bakery. That building is now abandoned like so many other former factories in the Brass City, which earned its name from the brass companies that dominated the landscape for most of the twentieth century. For me, the two stars of this film are Waterbury itself—a city of immigrants from Europe and migrants from the American South—and its still luminous ghost.

Stanley & Iris is a footnote in Jane Fonda’s career. Like Waterbury itself, it’s been neglected or forgotten. Those who do remember it might recall the “Hanoi Jane” protests, which began in the fall of 1987 after the Waterbury Republican ran a story that Fonda and DeNiro would soon be visiting the city to work on Ritt’s film. After a letter to the editor from Guy Russo, a World War II veteran who took Fonda to task for her allegedly traitorous behavior during the Vietnam war, some veterans’ groups began organizing against her. Bumper stickers proclaiming I’m not Fond’a Hanoi Jane “were still being driven around the city twenty years after they were printed,” according to Jerry Lembcke’s excellent history Hanoi Jane: War, Sex & Fantasies of Betrayal. I remember seeing these faded reminders of the controversy on Lincoln Continentals and Chrysler K-Cars in the late 1990s when I worked at the University of Connecticut’s Waterbury campus—relics of my high school years, vanishing like the redbrick factories that serve as set decoration in the film.

In response to the protests, Fonda met with a group of Vietnam veterans to address the myths surrounding her resistance to the war. Her 2006 autobiography, My Life So Far, includes a detailed account of this meeting, which took place at a local church. Fonda remembers a “raw, angry, and emotional” conversation. What Fonda learned about the city at these meetings no doubt had an impact on the subtlety and depth of her performance as Iris King. Most of the Vietnam veterans she spoke with, she realized, were first-generation Americans. “For these young men,” she explains in her book, “serving their country in Viet Nam was a rite of passage into true citizenship.”

As she reflects on her time in Waterbury, Fonda adds that she has “come to feel that one reason healing doesn’t happen more often is that the two sides don’t allow themselves to really hear each other’s narratives.” This is the secret to her performance in this film. While most of the other characters in the movie are storytellers—sharing their disappointment, their joy, and sometimes their rage—Iris is the one who listens.

Critics acknowledged the film’s good intentions, but largely dismissed it. Many took issue with Fonda’s performance. “No matter how much she tries to be an assembly line worker in a bakery,” Carlton Jackson writes in Picking Up the Tab: The Life and Movies of Martin Ritt, Jane Fonda “cannot, as one reviewer put it, get rid of her ‘golden brown hair,’ and ‘California tan.’”But, as I watch Fonda’s performance now, her work eclipses that of her co-star. When I see her, I see the face of my aunt with her blond hair, so blond it was almost white when I knew her. Iris brings these spirits to life for me, the ghosts of the women who surrounded and protected me when I was a kid and my mom was teaching school as my dad pursued his law degree.

Even the interiors of the film, some of which could very well have been shot on a soundstage somewhere other than Waterbury, haunt me: the cobbler’s shop, so much like the one I remember on the corner of Davis Street and Main in Oakville, just beyond the Waterbury city limits. It’s now a computer repair shop. After an encounter at the shoemaker’s, Stanley and Iris meet again at a laundromat. The scene opens with an image of four identical Maytag washers, each mustard yellow, the color of my late 1970s childhood. Suddenly I am once again in the back seat of my Aunt Annie’s Pontiac, also mustard yellow, and we are crossing Davis Street on our way for groceries at the Pik-Kwik. I watch the scene at the laundromat and I see Stanley carrying a bag of clothes. He enters the shot from the right of the frame and he moves the way my cousin Jimmy moves, nods his head, and smiles.

As Ritt cuts to a shot of Iris, we realize we’ve been watching Stanley’s entrance from her point-of-view: the drab washers, the hand-painted advertisements lining the walls, the headlights of cars reflected on the bright and clean mirrored surfaces. This is her world. We now see Iris, her hair pulled back, a plastic laundry basket and a blue bottle of Yes detergent and fabric softener beside her. She is reading a magazine. She looks up, grins, and glances at Stanley. What will she say to him? She hesitates. “Can I buy you an egg roll?” he asks. “You sure can,” she says.

She’d like to take a day trip to Boston this year. “See, I like bright lights and a lot of people,” Iris explains. As they finish their meal, Iris breaks open a fortune cookie: “‘Make new friends and trust them.’ Did you write this?” She urges Stanley to read his fortune, too, but he frowns, shrugs, tucks it away in the pocket of his gray jacket. “Nah, no point in opening mine. I’m not lucky.” Maybe they ought to check on the clothes. “Ok,” Iris says. She looks disappointed, confused. There’s another story here in the look of concern and confusion on her face. Williams’s score plays in the background, but the scene would work just as well if it were silent. Fonda works magic in the abrupt silence between her and De Niro; the expression on her face conveys sadness and discomfort and optimism. Maybe she is still thinking about that day in Boston. Maybe De Niro’s character likes Boston, too. Maybe they’ll have adventures.

The film’s critics were wrong. Jane Fonda’s brilliance lies in her ability to make me believe that she is a woman like the women I knew when I was a child: funny, compassionate, tough, glamorous. But, in calling Jane Fonda’s characterglamorous, I know I must sound sentimental, nostalgic. Am I remembering my Aunt as I would like to remember her, idealized, a fantasy like the film itself? No. I think I’m right. One of the definitions of glamour, after all, is “a magic spell.”

And, anyway, isn’t nostalgia a kind of magic, a charm that revives the past and transforms it into something ever present?

I saw my aunt Annie, my grandmother’s sister, for the last time in the spring of 2000. In those last few hours we spent together, she was there with me, then suddenly somewhere else, telling a story about my grandfather or my grandmother, and suddenly it was 1940, 1959, 1960. A few minutes into the conversation, I realized she didn’t recognize me. Maybe she thought I was her brother-in-law, my grandfather, who looks a little like me (or, I should say, I look a little like him). She shared a room with another woman in the nursing home on the corner of Bunker Hill and Straits Turnpike in Oakville, just across the street from a gas station, a bank, and the Kmart where I’d shopped with her and my grandmother in the 1970s.

In the last few years of her life—she died in May 2005, at the age of 94, just a few weeks before I moved to Chicago—she started painting pictures of flowers. Her brother Eddie was a painter, too, and for years one of his still lifes hung over the staircase leading to the second floor of her house. Her husband had been dead for decades. She painted flowers, I think, because she missed the garden behind the house on Bamford Avenue. It was filled with roses, hydrangeas, and chrysanthemums. In the summer there were cucumbers and tomatoes, too. She must have been painting her memory of those flowers, and what a privilege, I think, to see what she saw when she looked outside of herself.

Brian Cremins is a writer and comics scholar living in Chicago. He is working on a study of the original Captain Marvel for the University Press of Mississippi.