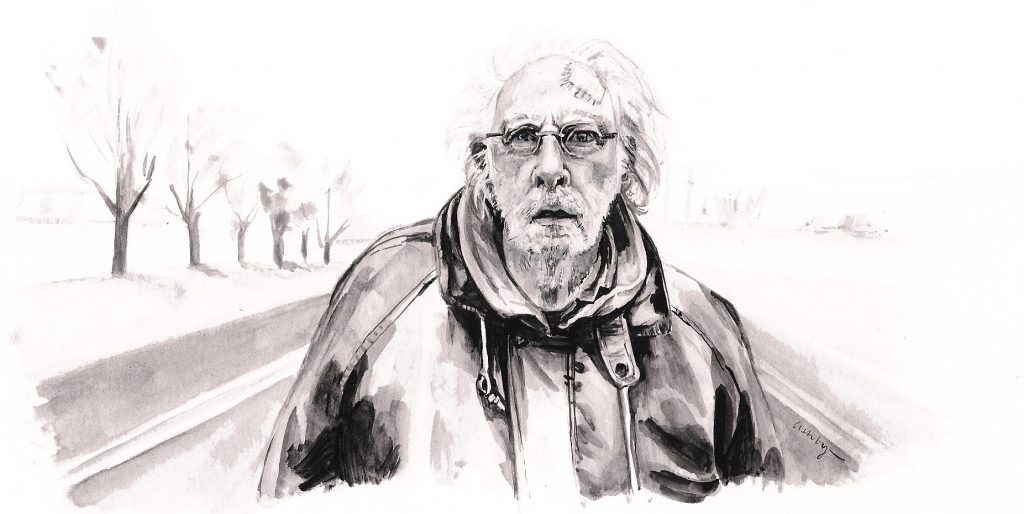 illustration by Brianna AshbyThe winter of 2014 was the longest winter of my life. Beginning in January, I moved from Vancouver to the sleepy, snow-laden town of Lively in Northern Ontario, on the outskirts of the Greater Sudbury Area, for a four-month work placement. Not twenty minutes from the main city of Sudbury, a mining town which greets you with large factories and looming chimneys that jut out against the formless sky, dwarfing the industrial banality of the landscape below, I found myself moored just along Lively’s main road, on the second floor of an old but spacious house, home to a lady and her two cats. Roads upon roads upon roads wind about the sparse landscape, connecting the main city to outlying areas such as Lively. “Welcome to Walden,” heralded an outdated sign as I first passed through the town. Thoreau would have been proud.

In this landscape, uniformly gray and expansive, I found myself preoccupied with the idea of simply being on the road—an idea informed by films and books, art and anecdote, as well as brief childhood vacations in California. Whether going west to California in The Grapes of Wrath, or escaping to the far reaches of Montana in Badlands, the road remains at the forefront, the essential experience that, to me, always seemed so distinctly American. It was a yearning that had lain dormant for years, stirred up now by an inexplicable wanderlust.

In those months, while working in a physics laboratory deep in a mine 6800 feet below sea level, I would learn the difference between a Majorana and Dirac particle (and what it would mean if a neutrino were one or the other), and while going between work and home I would also learn what a “white-out” was and what it felt like to try and drive in one. It would also be in that short time, not long after watching Alexander Payne’s Nebraska, that I would travel across snowy roads under sunny winter skies and learn the meaning of distance—not as walked, or as flown—but as driven. It was then, in the far reaches of Eastern Canada, that I experienced a glimpse of the American road.

To me, the single most striking aspect of Nebraska—and of the entire American landscape—is the road. Distances of hundreds of miles stretch across the uniform topography, imprinted with grey, smooth highways that cut through brush and dirt, flanked by prairies that stretch out in rolling expanses as far as the eye can see. Cities are bridged not by plane or by boat, but by bus, car and train. Distances too far to walk, but also too close to fly, connect town to sleepy town, each with its unique rhythms and social grammar. Extended family is dispersed across the scattered, landlocked geography, just close enough to seem connected, but just far enough to be inconvenient.

Reflected in the highways and freeways that I traveled along was the American road that I knew from films and books, that I saw now in Payne’s return to the Midwest. Strange as it may seem, between Nebraska and Northern Ontario, I found the American road.

The film opens with a man walking along a busy road, a lonesome figure amidst the familiar sights and sounds of midday activity. Wide-angled shots foreground trucks driving slowly past. Stopped cargo trains and smoking factory chimneys fill the background. Later we learn that the man is Woody Grant (Bruce Dern), an elderly, cantankerous fellow who plans to walk from Billings, Montana to Lincoln, Nebraska—a distance of over 800 miles—to pick up a million dollars in sweepstakes winnings—which everyone but him quickly recognizes as a scam. As the film progresses and his son, David (Will Forte), decides to drive him to Nebraska, it becomes a film that runs deeper than expected; a moving portrait of family life, and an elegiac ode to the American Midwest.

As cinema that firmly establishes a sense of place, Nebraska succeeds like few others. The flat Midwestern landscape stretches out in fields upon fields, awash in unfocused grayscale. The film’s black-and-white tones, languid pace and still shots evoke a sense of nostalgia, an ambivalent longing for a way of life that, if not already gone, is slowly dying. What begins as a simple road trip to pick up non-existent prize money becomes an almost literal journey from the America that Dave knows to the America of his father, and the road that lies between.

All this and more emerges in Payne’s singular portrait of the Midwest, realized as only someone from the region could conceive. As Dave and Woody drive towards Lincoln, joined later by Woody’s wife Kate (June Squibb) and Ross (Bob Odenkirk), Dave’s anchorman brother, the places that surround them are imbued with a sense of reality as stark and crisp as Phedon Papamichael’s evocative cinematography. Years of history, forgotten or suppressed, emerge in empty streets, fading taverns and quiet living rooms, stirred up like dust kicked up along the roadside, diffusing the faint afternoon light into wistful shades of grey.

In an early scene, just after David and Woody arrive in Hawthorne, Woody’s hometown where they make an extended pit-stop, Dave is mocked by his cousins for his languid pace, boasting that they could get Woody to Lincoln in no time at all. It’s a small but memorable moment, one that pokes fun at the distinctly masculine posturing while also highlighting an expected familiarity and affinity for the road.

Having grown up in the Philippines, on an island that stretched no more than 140 miles on its longest axis, the concept of a road trip had always seemed quite foreign to me. The simple idea that you could get in your car and just drive for hours and hours and get somewhere (or at least somewhere worth going) never seemed practical or even possible. In my hometown of Cebu, I don’t remember ever going more than 60 kilometers an hour, hemmed in by perpetual traffic and the organized chaos of a city without a single rule of the road. Highways and freeways were virtually nonexistent. Trains were a foreign oddity. I had ridden a plane before I had gone on a road trip, and long before I had even touched a steering wheel.

While living in Canada, often traveling more distance driving in a day than I would have in a week back home, the simple fact of the road gained a special importance. Sudbury, where I made my home for four short months, was a city that grew more by organic necessity than out of any form of urban planning (a housemate of mine during those four months, a civil engineer by profession, said that the city was frequently used as an example of how not to build a city). The landscape is sprawling and industrial, with distances that make public transit impractical, and it looms large, intimidating by sheer scale. Driving is not so much convenience as it is a necessity, an activity so woven into a way of living that anything else would seem out of place.

And yet, with all the distance, it was liberating to think that if I wanted, I could hop on a bus or rent a car and go, well, wherever I wanted—or at least as far as my money would get me.

Later in those months, just before the Easter weekend, I found myself on a midnight bus to Montreal. It was a plan that grew from simply staring at a map of Ontario, from picturing the single mass of land, expansive and large, imprinted with the dark roads that I had seen weeks earlier from the window of a small, propeller-driven plane. At the bus station, where people milled about tiredly, anticipation and excitement mingled with a dull sense of banality. Perhaps it was boredom or wanderlust or a mix of both, but as I prepared to go to a city where I knew no one and no one knew me, I wondered how many people across the continent were doing the same.

Whether going away or going home, the road is the in-between, the bridge between here and there, between there and back again. The draw of the road is not hard to understand: freedom, reinvention, escape; but it is also imbued with a deep sense of melancholy. Woody’s single-minded desire to go to Lincoln is built on the same: a bit of freedom from his wife, reinvention—albeit late in life—as a millionaire, escape from the life that he had built—or failed to. It is also a desire founded on an illusion. “We’re not driving to Lincoln over a stupid fantasy!” says Dave in exasperation, after far too much had happened for him to be able to indulge his father for much longer. But the thing about being on the road, about traveling from one place to the next, is that even if the destination is fantasy, the journey is as real as the miles of concrete that lie between.

It is telling that of all things Woody could do with the money if he had it, he would buy a truck—a brand new truck, even though he can no longer drive. “It’s for you boys,” Woody explains. “I just wanted to leave you something.” It’s one of the most moving moments of the film, and one of Dern’s finest line deliveries in a performance chock-full of them.

In the final scene of the film, Woody drives a new truck through Hawthorne, drifting by leaves that blow across empty streets, past people and faces of a time—of a life gone by. The truck rolls along a smooth contoured road. Fields flank both sides and a small grove of trees lies in the background. The late afternoon sun peeks out from behind thick, rolling clouds. The truck stops for a moment, changing drivers, then continues along the road, slowly disappearing into the horizon.

Being on the road creates a strange mix of exhilaration and boredom, comedy and melancholy. It cuts things down to essentials: origin, destination and the road between, and forces us look at the passage: the stuff of life that would otherwise pass us by. Sights, faces, names, people blur into an amorphous mass of ever-changing experience.

Four days after first arriving on that midnight bus to Montreal, I was ready to leave, my wanderlust assuaged (at least for the time being). I looked out the bus as it pulled away from the Montreal station, the city lit in a rush of neon and the faint glow of the moon, and I began to think about when and even if I would return. But even if I did, I knew it wouldn’t be the same city—as I left, it was already changing.

After all, places change and so do people; but the road, the road is steady. The scenes that surround it may change, the circumstances that bring us upon it may be in flux, but at least we can, for however fleeting a moment, take solace in the familiar banality, the essential experience of the road, until we disappear: moving specks on a distant, fading landscape.

Lawrence Garcia is a film-lover and engineering physics student living in Vancouver, originally from the Philippines. When he’s not building robots or trying to understand quantum physics, he writes—mostly about cinema.