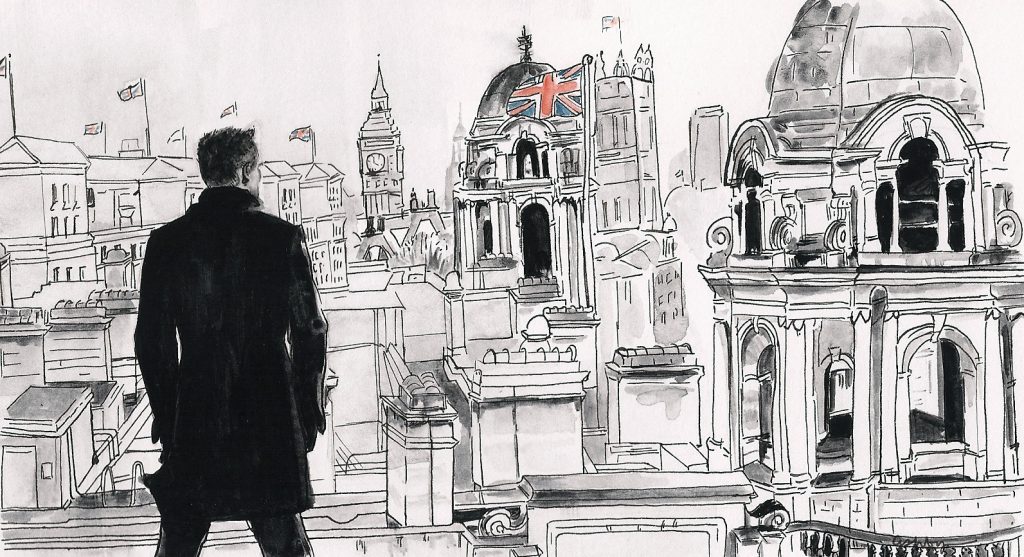 illustration by Brianna AshbyJames Bond sits, tied to a chair.

The film’s villain, Raoul Silva, approaches him slowly. “Just look at you,” he says, “barely held together by your pills and your drink.”

Silva laughs. “You’re still clinging to your faith in that old woman.”

The reference is meant to be made for M—Bond’s longtime handler at MI6—but it could just as well refer to England. James Bond is a protagonist who has existed in both literature and film for over fifty years, changing and shifting with the times. There are rules, of course, for Bond films, rules that never change. Bond is always drinking and smoking and gambling. Bond is something of a paramour. Bond is a ruthless killer, but only when he needs to be. And, of course, Bond is British. He’s gone.

In the wake of Bond’s death, England has changed. Skyfall, more often than not, deals with a new Bond and a new England. Both are old and strict in their regimes, a little antiquated in their nature. In a London without James Bond, M faces the consequences of her actions as his handler. Private information is leaked. She is going to be forced to retire. The British government is slowly but surely edging M out. She’s an old dog (as evidenced by the ugly English bulldog figurine on her desk); let the new guys out for a while.

Deakins paints England in grays. And for what it is worth, as someone who has walked those streets, and known that city, it is gray. It is gray and it is cold and it is an old city filled with old dogs. M returns back to MI6 following a meeting in which a younger minister (Ralph Fiennes) coerces her into retirement. The roads are blocked. There’s been an accident. M slides out of the vehicle and then—in the gray skyline of South London—MI6 explodes, a splatter of orange against a steel sky.

Even as Bond emerges from the grave, London is still a ghost of its former glory. MI6 has moved underground to Churchill’s old bunker. It’s brown and dusty. Nothing looks quite as good as it used to, including Bond himself. He’s run-down and tired, navigating a run-down and tired city.

The exotic locations of the film are painted in gold. Deakins portrays them as otherworldly. Shanghai is a dreamscape, neon blues and bright yellows. The hitman from Istanbul is there to do a job, and Bond is sent after him to finish his own job. The two men fight, evenly matched (Bond, perhaps, a little weaker), against a constantly changing and shifting window. They are on an impossibly high story of a skyscraper with images rolling against the side. There are letters and clouds and fish. Bond and the hitman are just shadows in this world.

Macau glimmers. As Bond enters, it lights up with money and antiquity and magic. Severine is there, draped in black and gold, her skin glittering with sweat and liquor. Everything is a little more dangerous and a little more daring. The dynamic way Shanghai and Macau light up the screen is vastly different from the way England appears: unchanging, unmoving.

Silva has been staying on a deserted island off the coast of Macau, and it is aswashed out and ugly as London. It’s a stark, dry yellow. There’s no one there but him and his henchmen, working to take down MI6.

Silva is truly sinister thanks to his connection to the internet-at-large—his lack of a pin-pointable home base. He boasts to Bond that he can make anything happen from anywhere with the click of a button. He has no home. He has no love of country. He is an ever-changing and shifting villain, with new goals for whomever is the highest bidder.

This is how location works in the internet age. Pitted against Bond’s “pathetic love of country,” Silva has so much more room to do as he pleases. Bond’s love of England is a hindrance, Silva argues, not a loyalty. He has no loyalty to his little island, and it shows. It crumbles all around him, as if to suggest he destroyed it, when in actuality, he just let it go to waste. There is an ugliness to this lack of pride and it seeps into every building and skyline on the island.

Bond takes M to Scotland to hide, of course, but also for their last stand against Silva and his men. Deakins paints Scotland like a place that barely exists—a fantastical green and brown site, as immersive and exotic as Shanghai or Macau. There is beauty in Scotland because it is old. They hide in Bond’s childhood home, a run down old country estate. The house crumbles beneath them, and when they ask the gamekeeper, Kincade (Albert Finney) for guns, all he can present to them is knives.

Against Silva’s men, knives won’t do very well, but Bond and M and Kincade rig traps and distractions. They turn the house into a puzzle. There are no machine guns. No helicopters. That’s Silva’s men. Instead, it’s just an old-fashioned game of wits and parlor tricks. Silva’s men don’t win, but they nearly do, setting the house ablaze. It burns a bright orange and explodes and crumbles, because it is an old house with old values. Bond escapes into the moors, a crackling foundation falling beneath his feet.

In the ashes of his old country estate, aptly named Skyfall, as it sits on the bank of a loch, Bond catches Silva and stabs him. No internet tricks, no elaborate firearms. He is stabbed in the back with a knife. Out with the new, indeed.

Skyfall is a patriotic Bond. It stands for everything good about the franchise and the setting. Each set piece is its own place and time, all linking back towards England. And, in turn, Deakins shoots the epilogue in London as a little brighter, a little newer. England may be outdated, but in the sunlight, the city’s white stone buildings are bathed in light. It is an old place, but it is also a good place.