And Not to Yield 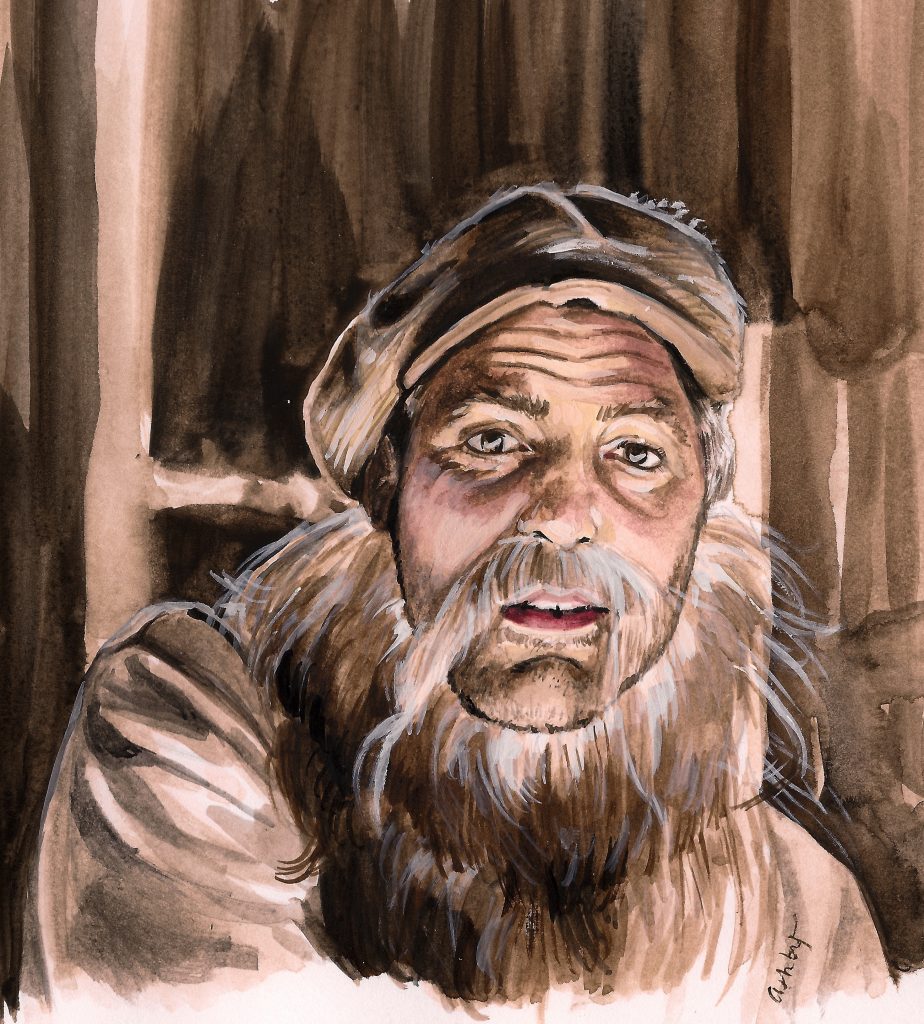 illustration by Brianna AshbyThree escaped convicts and a young man who claims to have sold his soul to the Devil arrive at a political campaign dinner disguised in very obviously fake beards. While the other men perform a song, their leader leans over, pulls the beard down from his chin, and whispers to his ex-wife, “I want to be what you want me to be, honey.”

And in that moment, he seems to believe it.

O Brother, Where Art Thou? opens on Ulysses Everett McGill (George Clooney) fleeing through a field, shackled to Pete Hogwallop (John Turturro) and Delmar O’Donnell (Tim Blake Nelson). Everett claims he robbed an armored car and hid the loot in a remote cabin, and now the three of them have to find it before the whole valley is flooded as part of a dam-building project. The journey is a lie from the start—there never was any money or any armored car; Everett went to jail for practicing law without a license, and escaped in order to keep his wife from marrying another man, quite literally dragging Peter and Delmar along with him.

The Coen Brothers’ film is about people wanting to be a better version of themselves, something a little lighter and brighter than the truth. (A lawyer instead of a con man; a husband instead of a cad.) But where other films might warn against the dangers of self-delusion, O Brother celebrates the courage and creativity it takes to change your identity. O Brother is a paean to the wild, reckless joy of self-invention, and the sustaining power of myth to bring us closer to our best selves.

Styling themselves “adventurers,” the three men and their guitarist, Tommy, amble through tall tales about that most self-mythologizing place, the American South. They meet the semi-mythic historical figures Robert Johnson and Babyface Nelson. There are politicians spinning campaign lies (though their old-fashioned bluntness may seem touchingly naïve to a modern audience). There are disguises, including white hoods. There are dishonest, dangerous women and men. There are stock Southern characters, from the wise old black man to the uneducated yokel.

Some of the myths may be uplifting. Some—like the implication that the KKK was a small band of incompetent bullies despised by the majority of white Southerners—paper over some very ugly truths. Even the film itself is falsified, right down to its lovely fake sepia tint (achieved with the then-novel use of digital color correction). And Clooney plays Everett with the self-conscious charm of a star from another era—in other words, he is an actor playing an actor playing a role.

When the Coen Brothers released O Brother, Where Art Thou? in 2000, critics delighted in pointing out the film’s many references to Homer’s The Odyssey, the epic poem that the Coen Brothers credited with their inspiration even while coyly (and not necessarily truthfully) claiming that neither of them had read the original work. Hades, Poseidon, the Cyclops, Teiresias, the Sirens, and the Lotus-eaters are all present in the tale of Ulysses, the smooth-tongued hustler; Ulysses escapes a chain gang and journeys back home through Mississippi, confronting a series of marvelous adventures in order to reunite with his (ex-)wife Penelope (here, Penny, for short).

The movie is indeed filled with allusions—from men turned into animals to a politician with the improbable name of Menelaus—but the ending of O Brother is different from that of The Odyssey. In Homer’s epic, Odysseus (known in Latin as “Ulysses”) arrives home after a decade of wandering, dispatches his wife’s suitors, and retakes his rightful place as husband, father, and ruler of his people. In O Brother, Ulysses Everett arrives home only to be sent right back out again—not once, but twice.

In Alfred, Lord Tennyson’s famous poem entitled “Ulysses,” the former adventurer says, “How dull it is to pause, to make an end, / To rust unburnish’d, not to shine in use!”

“Made weak by time and fate, but strong in will,” Tennyson’s Ulysses longs to go off on one last great adventure, “to strive, to seek, to find, and not to yield.”

This is the ending after the ending of every adventure story. The castle stormed, the bomb defused, the princess won—and then what? Where does our hero go after the credits? To sit at home “by this still hearth, among these barren crags,” to pay bills and pull weeds and stand in line at the deli counter? Happily, this is not the fate the Coen Brothers have in mind for their Ulysses.

“I want to be what you want me to be.” Okay: who does Penny want Everett to be? One might expect that she would want him to be the civilized husband and father that Odysseus becomes at the end of his journeys. Instead, she sends Everett off on the flimsiest of pretexts, refusing to take back the father of her seven daughters until he brings back her old wedding ring. Is she really that obsessed with a ring? Does she just want him out of her hair? Or is she, too, a little in love with the roguish gallantry of someone who would dive to the bottom of a lake just to retrieve a ring for her?

Everett and his companions stumble into the sheriff who has been hounding them since they left the chain gang. Just when death seems imminent, they are rescued by a deus ex machina—the valley is flooded, the sheriff killed, and all four men are saved.

Peter and Delmar thank God for a miracle, but Everett plays the skeptic. Floating above the flooded valley that never held his treasure, he says, “Yes, sir, the South is gonna change. Everything’s gonna be put on electricity and run on a paying basis. Out with the old spiritual mumbo jumbo, the superstitions, and the backward ways. We’re gonna see a brave new world where they run everybody a wire and hook us all up to a grid. Yes, sir, a veritable age of reason. Like the one they had in France. Not a moment too soon.”

This would seem to be the end—the end for our self-styled hero, who has escaped prison and reunited with his wife; and the end for the myth-intoxicated Southern landscape that made him. And just then, as the old blind seer had predicted, they see a cow on top of a roof. So Penny sends Everett back out for the right ring; and Everett escapes the fate of his Homeric namesake; and we, the audience, are spared the disappointment of imagining a chastened Everett sitting patiently through seven consecutive PTA meetings.

We know that the South was never the sepia-tinted dreamscape the Coens present it to be, not during the Depression and certainly not today. We know that every hero grows old and weak and commonplace. But in O Brother, there’s always time left for one more journey.

Summer Block has published essays, short fiction, and poetry in McSweeneys, The Rumpus, Identity Theory, DIAGRAM, PANK, The Nervous Breakdown, and many other publications