But That’s What Happened, Man. 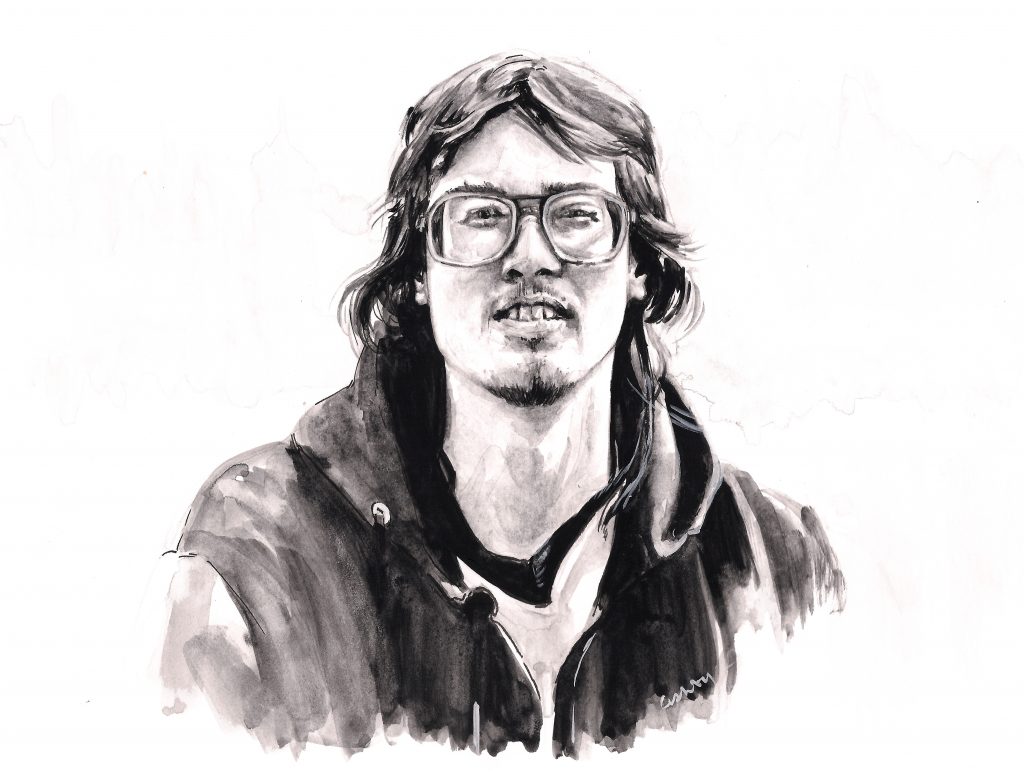 Idivided my childhood between three different states. When I was eleven and had just begun to establish a New York-based identity (Knicks fan, stealthy listener to Z100’s “Love Phones,” eater of Charlie Mom potstickers, buyer of shoes on 8th street), my family moved to rural Connecticut, and I had to start all over. It was like relocating to another planet where people ate venison unflinchingly, owned canoes and had passionate feelings about junior high soccer games. Three years later we moved to Los Angeles; I arrived fat on New England cream-based soups and with the view that malls were exotic destinations you visited on very special occasions or when somebody owed you a favor. I never felt very American as a kid—how could you make a cohesive collage out of that mess of grungy, 80’s-era NYC streets, fall foliage and freeways?—but I sure did become familiar with feeling like a transplanted loser. In retrospect I prefer the term underdog, a word that dresses up the schlubby loser in athletic gear while bearing some phonetic resemblance to the “Under Toad” from The World According to Garp, where it’s used as an umbrella term for mortality-related anxiety. The underdog beats the clock, accomplishing what the loser doesn’t just before the sound of the buzzer, but right up until that final moment, they’re exactly the same.

American Movie‘s Mark Borchardt sits in an office in his parents’ house during the opening credits, shuffling through his mail. There’s a delinquency notice from the IRS regarding an unpaid bill for $81.11, as well as a brand-new credit card. “Oh, God,” says Borchardt, “kick-fuckin’-ass, I got a MasterCard! I don’t believe it, man. Life is kinda cool sometimes.” He is in his 30’s, broke, lives with his parents, struggles with drinking too much and is on bad terms with the mother of his three children. If the documentary (directed with sympathetic yet cutting precision by Chris Smith) had not been released in 1999, Borchardt would have been pegged as the perfect example of the modern millennial, an adult living under his parents’ roof while working a service job for which he’s probably overqualified, if he’s working at all: in one scene, a sniffle-ridden Borchardt lies in bed while his mother tends to him, two adults performing roles they’ve long outgrown. As a teen he was precociously ambitious, gaining placement in the gifted program at school and shooting Super 8 horror movies with his friends, but he dropped out of high school because he didn’t feel intellectually challenged (at least according to his parents; one of his brothers confessed that he thought Mark would be best suited to “working in a factory, maybe”). Even when millennials are painted as entitled, needy, lazy brats—one of the loudest and most repetitive thinkpiece refrains from recent years—it’s hard to deny that they were entering the job market at a critically bad time and with massive student loans to pay off. Things were easier in the late ’90’s, it seems, but not for Borchardt, though he lacked circumstantial justifications. He simply refused to deviate from his plan to make movies—very slowly—on his own terms. After a brief stint in the army he returned home to Wisconsin and set to work on his feature-length debut, Northwestern.

The Midwest in the twilight of the ’90’s was a beautiful place, but maybe I remember the 90’s as being beautiful everywhere—not a better time than today, but different, like it’s been airbrushed and given a nostalgia filter. Pre-9/11, pre-housing bust, even pre-Y2K, Americans lived on a leaner diet of information. We had more time to reflect, which is exactly what Borchardt does while on his paper route: in his earnest mullet, he wonders what Christ would think of capitalism (while describing himself as half-Satanist, half-Christian). He attempts to manipulate his elderly uncle, Bill, into investing $3,000 in his film, but not because he’s a swindler. Borchardt seems to actually believe his own aggressive sales pitch, because he’s authentic in a pre-hipster sort of way. At a production meeting for Northwestern he promises his prospective cast and crew that the audience will “get to see Americans and American dreams” and “won’t walk away depressed after seeing this [film], period.” He’s particularly inspired by The Seventh Seal and Manhattan (especially the planetarium scene). Borchardt has no problem hatching ideas, nor does he struggle with imagining how great the finished product will be. It’s all that crap in the middle — the work itself — that he just never seems to get the hang of.

To bankroll Northwestern, Borchardt decides to complete another unfinished project, a horror film titled Coven, pronounced COE-VIN because, according to Borchardt, a title that rhymes with “oven” just won’t do. Coven is Borchardt’s version of a day job, though making a movie to make a movie, in these circumstances, isn’t the most practical solution (nor is getting drunk on peppermint schnapps and making long-distance phone calls to Morocco during production). If he sells 3,000 copies of Coven, he claims, he’ll make the 45k he needs to complete Northwestern. Early footage of Coven includes black-and-white shots of the cast, dressed in black capes, bashing Mark’s car with iron rods at an abandoned drive-in theater and dragging Borchardt through a deep swamp puddle repeatedly. He stays focused by driving by newly constructed houses, the kind he’ll buy when he finally makes it. He pauses outside a perfectly nice, aspirational brick home, considering it carefully. “Actually,” he says, “my house ain’t gonna look like this, man. It’s gonna be flatter, a lot flatter. Less obnoxious than this.”

“The American Dream stays with me each and every day,” says Borchardt between trips to the airport parking lot, his preferred writing spot. Sometimes he wears fingerless gloves while he works. I wonder if he’d ever identified with Wayne’s World‘s Wayne Campbell, a fellow Milwaukeean who lived with his parents in adulthood and had a genial sidekick (Borchardt’s Garth is his longtime friend Mike Schank, a genial guy with a closet full of Zeppelin shirts and some good acid-dropping stories, with whom he used to party before Schank joined AA). Borchardt has the same feckless earnestness that you can’t decide whether to laugh with or at.

The glimpses of yourself you see in Borchardt shift throughout the years. When I first saw American Movie in 2006, I was working at a vintage clothing store and blithely guzzling vodka sodas until four in the morning; I had recently graduated from college and had plenty of time to land myself in a 30 Under 30 list or apply to graduate school without feeling like I had done so out of professional dissatisfaction. There were no failures yet, only promise. Sure, I was spacing t-shirts that smelled like old sweat for a living, but that was part of the adventure. I was 23, with a decade to create my own passion project before I became a Borchardt. Back then, anyone in their 30’s brave enough to admit they were still figuring out what they were doing with their lives was a joke. I was sure that I and all my friends would magically mature into Real Adults with impenetrable life plans, probably when we were 25 but definitely by the time we were 27. I thought that outcome was inevitable, and that Borchardt was just a goofy exception to the rule.

Eight years later, I am the same age as Borchardt was during American Movie‘s filming, and I view things very differently. It’s like the moment when you catch yourself in the mirror, scraping your toddler’s leftovers off a plastic tray, and you see the 3/4 profile of someone you don’t recognize. Someone old. You aren’t old, not technically, just much older than you expected yourself to be. What I now see in Borchardt is a person straddling the divide between the underdog and the loser, between youth and maturity, knowing that he’s at a critical point in his own self-determination but still clueless about what to do with that information. He endures losses and gains: he finishes Coven, which currently has a 38% rating on Rotten Tomatoes; he’s currently directing music videos and appearing in web series (his beard is now white), so he’s better off than in ’99—but he’s also yet to complete Northwestern, despite the positive exposure he gained from American Movie and a cash pad given to him via Uncle Bill’s will. The bar he sets for himself is so high (I mean, come on, The Seventh Seal?) that it’s like he’s placed it intentionally in his own way, pre-excusing him from failure. His ambition is larger than his capabilities, and the clock is his enemy.

Maybe all of the versions of yourself you’ve known—the bank-overdraft and sushi years alike—have been the evolution of a dream that time and rejection never quit trying to erode. You’ll spend decades trying to defeat them, and sometimes you’ll actually win a round or two. Borchardt would seem arrogant or juvenile in his quest for auteurship, except that his belief in himself is as real and tactile as the pre-modern-Internet world that surrounded him. He is a man without an avatar, without a Kickstarter fund, solidly planted in a now-defunct meatspace but with all of the same frustrations freelance artists face now andhave faced forever. It’s his innocence—not just because he belonged to what we can now consider a vintage era but because he really seemed, at that point, like he might be about to pull everything together—that’s what makes him so emblematic, in a way, of the pursuit of happiness. We try and try, looking back over our shoulders at our retreating selves, and promise to do better, work harder, and to get there, wherever “there” is (a flat, un-obnoxious brick house, perhaps). One day the crowds will cheer, and we’ll all finish our Northwesterns. The only way to die an underdog instead of a loser is to die trying.