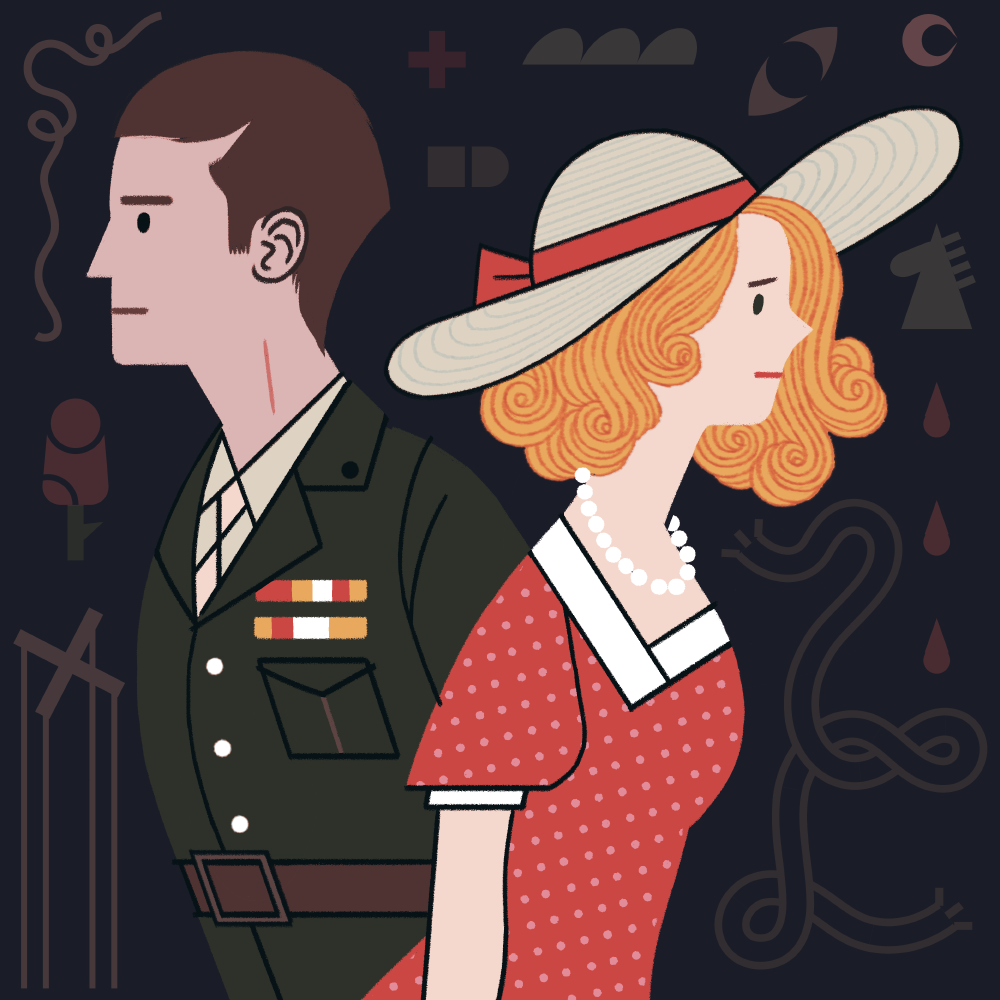 “…only a half dozen Puritan millionaires stood on the wharf in the wind colder than the impossible snows of the Abruzzi, ready with country clubs and dynamos to grind the organs out of you.”
—Sandra Mortola Gilbert, “Mafioso”

Never mind trying to debunk all the stereotypes of lubricious Sicilians that creep into every frame of The Godfather. I mean, fuggedaboutit. The “dago guinea wop greaseball goombahs come out of the woodwork” only to pose us a problem we can’t refute: if our new citizens start to look like stereotypes, it’s only because America’s standards for assimilation have resulted in their exploitation and oppression.

The vision Frances Ford Coppola presents is a cynical reality that many first-generation Americans experienced in the first half of the twentieth century: you have to live near your own countrymen because your parents only speak that language; you have to eat your country’s native foods, because that is what your mother can cook to perfection from memory; but you feel left out, shut out from the larger part of the population. You are blindly dismissed for clinging to another nation’s cultural traditions, for being unable or unwilling to assimilate, even as you are shown no other options.

The Corleones’ story may be every immigrant family’s story. Like the Corleones, my own father’s immediate family is extensive: he is the oldest son of eight children. He grew up as a first-generation American in Hamtramck, a Polish-speaking neighborhood in Detroit, and his family certainly bears some shadowy traces of ethnic stereotype.

Actually, I guess he is first-and-a-half generation: his father was born in the United States to Polish immigrants, but his mother was born in a central-Polish village where she lived until she had to leave at age twelve. Similarly, Vito Andolini has to leave Corleone, his rural Sicilian home. He leaves, of course, under threat of death. This is also how my grandmother left her family. When she was twelve, German soldiers came into her house with the orders—“Pack a bag. We leave in thirty minutes.” She and one of her sisters spent the next seven years in a Nazi work camp. “We went to work on the farm for them” is how she put it.

From the outset of the film, we know that assimilation is going to be a lynchpin for these characters. The mortician Bonasera extols his new home with a thickly accented decree: “I believe in America.” His new life and his new trade give him the opportunities he’d hoped for in a new country. But Bonasera’s daughter has started dating a young man—“not an Italian”—who takes her out with one of his friends, gets her drunk, tries to rape her, and viciously beats her when she fights back. Bonasera weeps, “She was the light of my life. Now she will never be beautiful again.” Wires bind his daughter’s shattered jaw together. Even less is holding together his shattered illusions of America.

For the mortician, seeing his daughter’s attackers go free is a failure of the justice system in a country he wanted to be a dream world. For Bonasera’s daughter, the injury is much greater.

Another stereotype: the Virginal Beauty whose purity must be preserved, whose fall represents acquired knowledge about the darkest parts of the human spirit. The sickish oxidized green of Lady Liberty’s original copper. Imagine trying, as this girl did, to fit in with young Americans, doing whatever you can to stifle the heavy accents and outrun the traditional values of your home culture. You want to kick off the stereotypes—the organ grinder, the greasy mafioso—but you’re met with brutal resistance. Bonasera’s story of departed innocence and beauty parallels the emotional developments that follow Michael’s early assertion that he will never be involved in his family’s violent dealings. Bonasera wants to love America for its possibilities, and yet he hates the country for what its people have done to his daughter. Michael wants to purge himself of mob corruption, but he cannot stop loving his family in spite of their faults.

Throughout the movie, Michael does what he can to distance himself from his family. His name is the least Italian—the most American—of his siblings. Vito calls Sonny “Santino”; the characters use “Freddy” and “Fredo” in nearly equal measure; Connie hears “Constanza” as a stern warning. While Michael is in Italy, the villagers refer to him by his Italian name—Michele—as does the priest during the Latin portion of the climactic christening. To his family, though, he is always and only Michael.

But, much to Michael’s dismay, his blood is more telling than the syllables of his name—it runs red, strong as Sicilian Marsala, even in the veins of a decorated American war hero. He may have brought a beautiful blonde girl in a red and white polka-dot dress—the very image of American assimilation—to his sister’s wedding, but that doesn’t mean Michael is assimilated. Everywhere Kay turns, she sees swarthy complexions and dark brown hair. Michael’s brothers, his sister, their spouses, their children. Michael’s family. Michael himself.

Don’t ever take sides with anyone against the family again.

My grandfather’s platoon liberated my grandmother’s camp. He spoke fluent Polish, and promised her love, marriage, a home, and a job that allowed her to send money to her family. The romancing was a quick process; just like Michael and Apollonia in Sicily, it was a lightning strike. My grandmother spoke no English when she moved to America at age twenty. She only learned as her children did. She didn’t have to know the language any earlier, because their neighborhood was teeming with fluent Polish speakers.

Though they met with occasional ridicule from the larger Detroit community, the Polish family fostered their own prejudices as well. My grandmother found fault with films likeSchindler’s List because of what she perceived as historical inaccuracies. “Schindler would never have kissed that girl,” she complained; “You weren’t allowed to touch a Jew. He would have been thrown out of society and she would have been killed.” I don’t know the extent to which she or my grandfather subscribed to the prevailing prejudices that circulated through Europe during the war. I got the sense they believed this was just the way things were. Echoes of such anti-Jewish sentiments can be heard in Vito’s decree that one trifling favor be handed over to “Some Jew congressman in another district” instead of a fellow Sicilian.

Prejudice not only affects those below you on the social pecking order, of course, but also shapes how you interact with the more completely assimilated. The Corleones’ German-Irishconsigliere and adoptive son Tom Hagen is sent to deal with the Hollywood executive Woltz. Even before he’s in the business officially, Michael knows not to put his favor outside the family: he refers to Tom somewhat dismissively as “not a Sicilian, but a good lawyer.”

Michael’s biased account of Tom is very like my family’s particular brand of cronyism, which involved deep and abiding suspicions of anyone whose name might remind us of our motherland’s recent German and Russian combatants. My mother is a Kay Adams type in her innocuous Americanness and her assimilated Protestantism. Because she sported an unsavory German surname, she had to convert to appease my father’s Polish-Catholic family. When one of my cousins displayed a poster of the Detroit Red Wings’ famous Russian Five, some of the hockey club’s most popular players of the mid-nineties, there was a furor in the household.

It’s so much more difficult to avoid these conflicts when your neighborhood in the city butts up against any number that your cultural enemies might inhabit. Corleone and the othercaporegimes of New York’s five families divide their territory to defer just such possible confrontations, but this does not stop someone from feeling slighted if a business alliance is turned down. Virgil Sollozzo—aptly nicknamed The Turk, in another showing of xenophobia—sends men to shoot Vito down in broad daylight. Afterwards, he tells Michael “Blood is a big expense.” It is indeed: Michael has already realized that his family, his blood, makes him who he is. I can never trace exactly when Michael crosses the line in his head to take up the family business, but the “why” of it is definitely in Sollozzo’s attack.

Leave the gun. Take the cannoli.

There are, nonetheless, subtle hints of a new cultural identity, an assimilated or hyphenate Italian-American lifestyle that could make way for beautiful hopes like those Bonasera had for his daughter.

Vito explains similar hopes to Michael: “I worked my whole life—and I don’t apologize—to take care of my family. I refused to be a fool, dancing on a string held by all those big shots. I don’t apologize, that’s my life. But I thought that when it was your time, that you would be the one to hold the strings. Senator Corleone. Governor Corleone. Something. There just wasn’t enough time.” Not enough time, that is, for Vito to establish himself as a legitimate citizen. And not enough time for Michael to distance himself from the Corleones’ sordid past.

Just because America has dealt someone alienation, however, doesn’t mean that attitude has to continue. Apt, then, that the film begins with a wedding and ends after a christening. This is a new potential for a new generation. Maybe there will finally be enough time to escape stereotypes. To leave the gun. To move forward. To put the violent past behind you.

But there is still gunpowder in the air as you leave the church. This dizzying waltz, the plaintive trumpet, won’t get unstuck from your head. You can’t forget who raised you. These are your roots. You refuse to talk about your business. You close the door on anyone who fails to understand you. You take the cannoli.

Katie Zimolzak definitely believes in the healing power of foods from the motherland, and she will make you pierogi or gołąbki if you ask nicely. She is a PhD candidate at the University of Southern California, where she is completing a dissertation on the multiple uses of promiscuity in 17th and 18th century British theater.