There’s No Crying in Marching Band 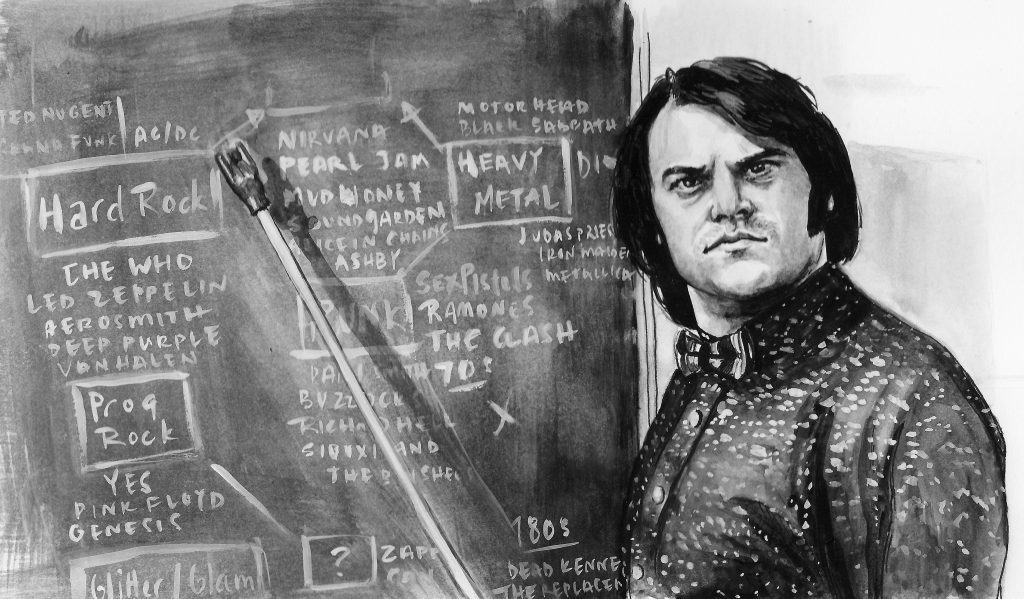 illustration by Brianna AshbyMorgan is missing. The other students are looking around, as if to pretend they didn’t notice that she left. Her vibraphone stands empty amidst a sea of keyboard percussion and timpani and tambourines.

“Where’s Morgan?” the other instructor barks. He’s in his mid-thirties, muscular, intimidating. The students don’t like him, and I don’t blame them. I worked with him several years ago, and still find myself a little terrified of his demeanor.

A small freshman boy finally goes, “She went to the bathroom like ten minutes ago.”

The instructor sighs and looks at me. I shrug. I don’t know what Morgan’s deal is. This is my second day on the job. And then I realize he’s looking at me because he’s not allowed to be in a high school girls’ bathroom.

Morgan is sitting on the floor of the bathroom outside the cafeteria. She is sixteen with big and beautiful red hair and a face full of freckles. Her face is wet with tears. She tries to apologize to me but she’s crying too hard. I don’t know what to say, so we sit on the floor together.

School of Rock is a film about a man named Dewey Finn (Jack Black) who, both unemployed and kicked out of his rock band, poses as a substitute teacher at a private elementary school. Instead of teaching the kids math and English and science, he teaches them how to form a rock band. School of Rock is a comedy, of course, but it also takes music very, very seriously. Dewey spends entire school days breaking down The Ramones and Blondie on a chalkboard before switching over to music theory before switching over to a brief lesson on songwriting. It is an all-encompassing music education; it just so happens to be taught by a fraudulent man-child.

Dewey Finn loves the students he teaches. Part of the issue with him as an educator (beyond the fact that he isn’t actually a teacher) is that he treats 10-year-olds like they’re adults. He respects them. He listens to them. He stands in a corner with Tomika, one of the students in his class. “They’re gonna laugh at me,” she tells him. When Dewey presses her on why, she answers, “I don’t know, because I’m fat.” Musicians come from anywhere, look like anyone, can be anything. Aretha Franklin was big, he tells her. Music is an equalizer. If you have talent, nothing else matters.

It is almost impossible to remember just how important marching band—and to a slightly lesser extent, music—was to me in high school, but it was basically my entire life. On Monday nights, I had marching band rehearsal. On Tuesdays, I had jazz band. On Wednesdays, I had orchestra. On Thursdays, I had marching band again. On Fridays, I played football games, and we spent every weekend of the fall in some kind of competition. It was my everything. I ate lunch in the practice rooms. My senior year of high school, I took more music electives than I did academic courses.

It was tough but I was good. I would bandage my bleeding, calloused fingers during class. I would stay until all hours of the night, learning and relearning the pieces I would need to know. We rehearsed for seven hours a day all summer. I would go home and fall asleep immediately and wake up and do it again, day in and day out.

I play percussion, which is a fancy way of saying I’m not a drummer. My high school instrument of choice was the vibraphone, which is like a xylophone, except the keys are metallic and there’s a reverberation pedal so that the notes can ring longer. Like chimes, but horizontal. Being a percussionist requires a lot of different skills. Vibraphone was my specialty but I could also play timpani, tambourine, bass drum, triangle, wood blocks, you name it.

In a section of 32 percussionists, I was one of four girls. The instructors were all male. There was enormous pressure to be tough and stone-faced. Music was the equalizer for us, too. If I stayed above the curve, I got less flack from instructors and percussionists. I didn’t want to just be a percussionist, I needed to be thebest percussionist there was. If I wasn’t, I was just like anyone else. I was just a girl playing with sticks.

That kind of attitude burns someone out. Around the latter half of my senior year, I started to plateau. I was working on a piece that I hated and my instructor was furious with me for not playing it well.

“And what?” he asked. “You’re only going to do things you like for the rest of your life?”

“I don’t know,” I said, because I didn’t know. I didn’t know what I was going to do for the rest of my life. I cried, and it was the only time I ever cried in front of a music instructor. He didn’t say anything about it. My lesson was supposed to go for another ten minutes but he let me out early. We were done.

Throughout my time in high school, we won the state competition every year. We placed second at super regionals. The same year that I cried during a private lesson, our percussion section scored a perfect score at a competition. “The vibraphones are magical,” the judge said into the tape. I rolled my eyes. There are no perfect scores in music.

School of Rock is beautiful in many ways because it plays out like a fantasy film. Of course it’s not realistic. Of course that’s not how educators should behave. It’s not real, but you want it to be real. I watched School of Rock in my early teens and wanted to be part of it. I wanted music to be as magical for me as it was to the kids in the film. I wanted it to save my life, but instead it became my life. I became a percussion score on a piece of paper.

That’s the thing about rock ‘n roll, Dewey explains. You don’t win at it. You can do a thing called Battle of the Bands and you can win a big check, but you’re never really winning at music. It’s not a competition. It’s about how it makes you feel. For the kids in School of Rock, music is liberating. It opens up a snooty, private school education into something bigger and better that allows the students to express themselves. You learn how to create and build something that is both yours and not yours. Music is about sharing. It’s about giving something away to someone else.

I think about that judge’s comment a lot: “The vibraphones are magical.” I feel guilty, in retrospect, for being annoyed. For rolling my eyes. When music is good, it is magical. Goosebumps prickle along your arms and you let the whole thing wash over you. I don’t remember what it was like to play that competition, but I know that judge felt something. I wish I remembered which part of the song it was. Which was the part the judge had loved? It all felt like another rehearsal to me.

Two years out of high school, one of my old instructors reached out to ask what I was doing for the summer and if I wanted to teach. On my first day, I attended a staff meeting with six other men in their thirties. They went over the basics and then they turned to me.

When I finally got in front of the kids who looked, to me, so young and so scared, I figured it out. Nine girls. There were nine girls in percussion that year. They had never dealt with more than four and they had no idea what to do with them.

“I’m gonna figure it out,” Morgan tells me finally. It’s a promise.

“I know you are,” I say. “You’re playing really well. You’ve almost got it. You’re really close.”

“I just got stressed,” she says.

“I know, but Morgan,” and I know I shouldn’t say it but I say it anyway, “it also doesn’t matter. It doesn’t matter at all. You’ll learn it because you have to learn it but please don’t let it make you cry,” I explain.

Morgan stands up and we go back to rehearsal together.

At Horace Green, the parents worry that Dewey Finn hasn’t taught their kids anything during those past few months. But really, they’d learned something important: collaboration, creativity, and all of those soft skills that become valuable as you get older. They have learned how to feel when a song comes on. They have learned how to lose themselves in a really good guitar lick.

I don’t play music anymore, but I love music so much. I make people quiet down when I hear something. Hold on a second, I’ll say, this part is magical.