You Already Have Your Poetry 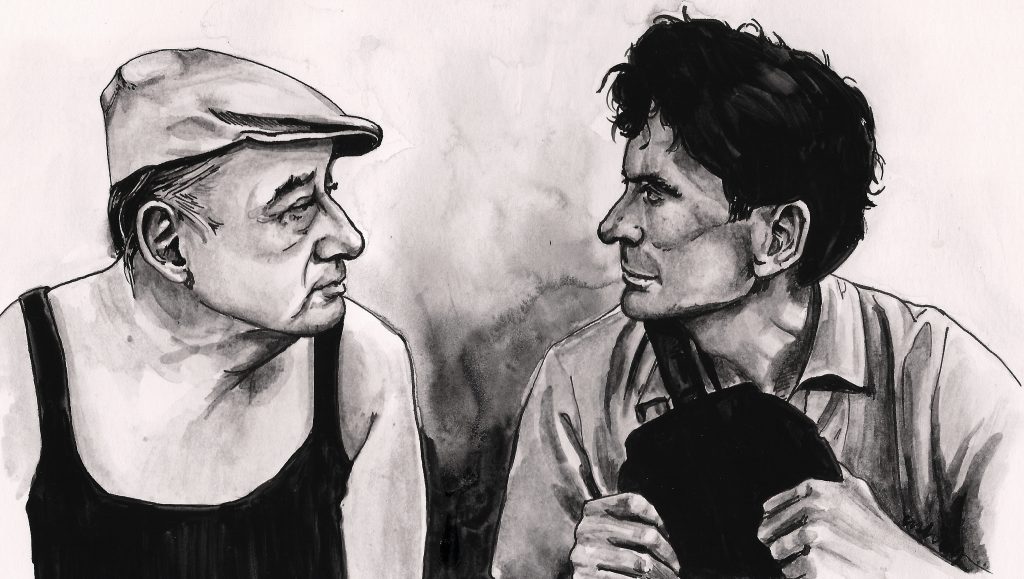 illustration by Brianna AshbyMs. Dunstan was a great teacher. Every Halloween, she came to school dressed as a chicken, or maybe it was a bunny, I can’t remember anymore. Something big and round and yellow, a walking burst of color within the washed-out walls of our California high school. She loved books the way an English teacher must, but not in a cheesy inspirational movie sort of way. She loved them like a grown-up who knows books matter and has the patience to let reluctant teenagers figure it out for themselves. She sometimes seemed a little cold, reserved, but then she’d drop a perfectly-timed quip about the asshole drawing in Breakfast of Champions and let us know she was on our side. She gave us movie days when we needed them, and on those days, she brought snacks. She showed us Il Postino in Creative Writing/Public Speech senior year. I don’t remember if it correlated with a book we were reading or a specific assignment we had. I think it was just a somewhat challenging break from the always-challenging work of being a high schooler.

Il Postino is about Mario Ruoppolo (Massimo Troisi), an Italian fisherman’s son who gets seasick every time he goes on a boat. He must find alternate employment, and so he goes to the post office, proves he can read, and is given a rickety bicycle and an important route: up the hill where The Poet is staying. The poet is Pablo Neruda (Philippe Noiret), in exile from his native Chile because he’s an outspoken communist. The postman becomes the poet’s biggest fan, and the poet becomes the postman’s greatest teacher. Their classroom is a kitchen table; a rocky beach; a political protest; life.

It’s easy to romanticize the great teachers in our lives, particularly the ones we had in junior high or high school, because they reach us at a time when little else can. When we are young and/or disillusioned, it often feels like nobody understands, especially not adults, and nobody will ever feel as strongly as we do about that song, that poem, that girl, that boy, or anything else in this stupid, messed-up world. The day after I gave an impassioned informational speech about Jeff Buckley, Ms. Dunstan beckoned me to the back of the classroom during a writing exercise and slid a Tim Buckley CD across her desk. There was a Post-it note on the cover: “In case you want to experience the older generation.” Another time, she invited the entire Academic Decathlon team to her house to practice for the upcoming competition, and cooked the best chicken I have ever tasted. It was so good, I became a vegetarian to avoid ever eating sub-par chicken again. That’s actually a lie: I kept eating meat for a few more years, and chicken was the last meat I gave up, but it sounds good just to say things sometimes. The things we say can carry meaning we never acknowledge until someone else points it out. After Neruda recites a poem about the ocean, Mario tells him, “I felt like a boat tossing about on those words.”

“But it doesn’t count because I didn’t mean to,” Mario says.

“Meaning to is not important,” the poet says.

Mario asks the Poet to help him win the heart of the beautiful girl who works in the town’s single cafe. Beatrice Russo (Maria Grazia Cucinotta), described in stilted awe, her name a soft shh in the postman’s mouth. The poet says he cannot help, but Mario borrows his poems anyhow and recites them to Beatrice as if they are his own. Later, he blames the poet for all the trouble love can cause. It’s your fault I fell in love, the postman says. But you had no right to use my words, the poet says. But poems don’t belong to the person who writes them, Mario argues, they belong to the person who needs them most.

Il Postino is about love, lust, and politics, but most of all it’s about discovering the power of language, the way the right string of images can elicit a feeling for which there are no words. Neruda defines “metaphor,” but of course Mario understands poetry long before he has the vocabulary to describe it. There’s poetry in the way his cap falls over his eyes, in how he pockets a pinball that has been in his beloved’s mouth, in how the name of the person he loves is a poem in and of itself. Beatrice Russo. Mario Ruoppolo. My open, teenage heart. I don’t remember every detail of Il Postino, my twelfth grade creative writing class, or Ms. Dunstan, but I do remember the feeling of coming alive in that classroom, of falling in love with language in a way that I hadn’t been able to name before, and of realizing that this thingI had always sort of liked was in fact the thing I wanted to do for the rest of my life.

When I became a college instructor, I showed Il Postino to my Introduction to Poetry class. We were halfway through the term, they were stressed out about midterms in every other class, I wasn’t big on tests, and movie day is a good way to fill required time with something tangentially related and enjoyable. So I played Il Postino, and felt that it was a smart choice, and felt very proud for figuring out the projector without asking anyone for help. I am the teacher. I operate the equipment. I hold the teacher’s edition and always read two chapters ahead.

My students’ reaction to the film was mixed. Some of them had never watched a movie with subtitles before, and several of them were bored. Some of them were deeply engaged in the romance, others the politics, and a select few everything at once. All of them seemed to enjoy the movie version of Pablo Neruda, a sensual, meaty man who welcomes the postman into his home and explains poetry like breathing.

When I was first asked to teach Intro to Poetry, I e-mailed every poet I know: “Help! I don’t know anything about poetry!” Once I got over being terrified and started to feel a little bit good at my job, I realized I knew more than I thought. Like every idealistic academic raised on movies, I started fantasizing about changing lives. I could see it so clearly: me in a sensible blouse and dark jeans, professional but cool, standing before the class as a slow clap builds from the back row, that one Michael Jackson song from Free Willy playing as we all start to cry. In real life, nobody cried. Once, the long-haired stoner who wrote essays about landscaping high-fived me and said, “Man, your poetry class is awesome” when I ran into him at the grocery store though.

Mario Ruoppolo sees his teacher as a giant, and of course Neruda carries the reputation of his name, but in the end, he is only a man. He teaches Mario about metaphors on the sunny terrazza of his Italian retreat, and Mario carries his own metaphors to a communist rally where he dies, leaving behind Beatrice Russo and their son, leaving behind the world of poetry that he only recently found. The disparity between what Neruda teaches Mario and what Mario gets in the end is deeply unfair, as life is unfair, and this upsets me every time I watch Il Postino, and it upset my students when they saw the film, too. Of course, unfairness is a common experience among students and teachers working hard in a flawed and frustrating system. I haven’t taught a college class in three years and I miss it very much, but I don’t miss institutionalized education. What I miss is sharing my love for literature and letting my students figure it out for themselves, and honestly, who needs a classroom for that.

When he is first starting to love poetry, Mario tells Neruda, “I really liked it when you wrote ‘I am tired of being a man.’ That’s happened to me, too, but I never knew how to say it.’”

After reading Elizabeth Bishop’s “In the Waiting Room”, one of my students said, “I’ve never heard anybody else say they feel this way, too.” I had never read Elizabeth Bishop before I taught her in that class, and I felt the same sense of awe. It’s the biggest trope in movies about learning: the student becomes the teacher. Pablo Neruda learns of Mario’s death at a communist rally and realizes the postman who he so often laughed at, whose ignorance charmed him every time they met, had given his life to the cause in a way the poet never would. We are all students all along.

I’m a good teacher. I wouldn’t say great. I worry too much about what my students think of me, whether or not they think I’m cool, and great teachers are usually the ones who don’t care. Ms. Dunstan never cared if we liked her or not, which of course made me love her all the more. She was sensible and straightforward, and spoke passionately about books and film, and listened to me, and never coddled. She respected my privacy while encouraging me to write more, speak more, and be bolder than I had ever allowed myself to be. She made me care about writing enough to care about college, and wrote my recommendation letters when it was time to apply. She fed me roast chicken and thick hunks of bread. I bring my students cookies when essays are due. After Mario Ruoppolo and Pablo Neruda become friends, the poet pours the postman a glass of wine. Take, eat, drink. We learn by consuming. Everything between student and teacher is food.

Elisabeth Geier is a writer, teacher, & etc. living in Portland, Oregon. She has previously lived in Dallas, Oregon; Missoula, Montana; Chicago, Illinois; Boston, Massachusetts; and Lafayette, California. She would be happy to direct you towards the best pizza in these locations.