God’s Not Supposed to Be a Hack Horror Writer! 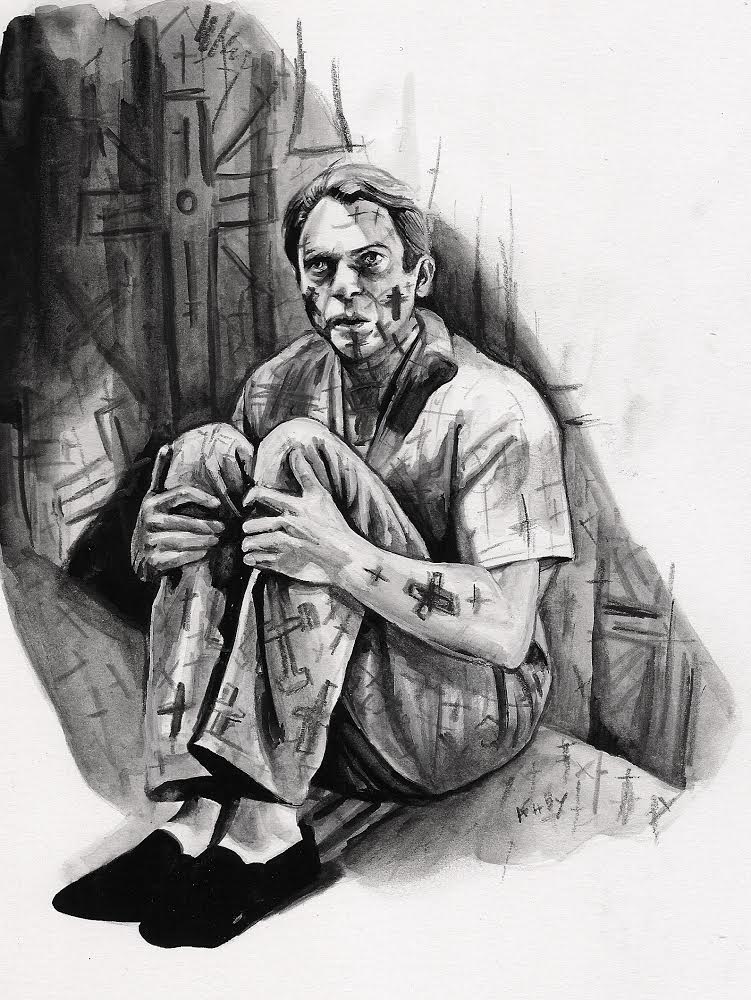 illustration by Brianna AshbyJohn Carpenter is considered a master of horror, and for good reason: his films are gorgeously constructed, often featuring elegantly simple plot lines that play on basic human fears and emotion. He is also a greatly intelligent horror thinker. In a 2012 round table interview with Clive Barker, Roger Corman, Ramsey Campbell and more, Carpenter outlined two major types of horror: right wing horror—the horror that is out there and must be destroyed in order to restore order—and left wing horror, or the horror inside. But there is a third horror, too: cosmic horror. Cosmic horror shows us a universe in which we have no agency. It denies the possibility of meaning and rejects the idea that we have any power to control our own existence. Cosmic horror says that not only is the world a malevolent place, but worse, that we are utterly insignificant to those larger creatures or forces truly in charge.

In the Mouth of Madness comes much later in John Carpenter’s career, years after the triumphs of both Halloween and The Thing, immediately iconic films that instantly cemented Carpenter as a towering figure in the horror landscape. And, while In the Mouth of Madness is not nearly as engaging as these earlier films, it remains one of Carpenter’s last great films, as well as one of the best examples of “cosmic horror” ever put on screen.

Many of Carpenter’s earlier films dabbled in the idea that all of us are alone and vulnerable in the face of some inhuman, incomprehensible evil (think of Michael Myers’ almost supernatural ability to stay alive, or the unstoppable alien life form in The Thing), but In the Mouth of Madness takes things one step further, pushing the idea of human vulnerability to its mad conclusion: that we cannot trust anything about reality, really, and are perhaps all merely the dreams of an unkind God. The film is largely an homage to H.P. Lovecraft, an author whose influence is felt just about everywhere in weird fiction and film. If any film or novel includes a storyline in which the very underpinnings of reality have been shaken, in which its characters come to realize they are simply a small part of a much larger, more grotesquely-populated, and far more malevolent universe than they had ever imagined, H.P. Lovecraft is there.In the Mouth of Madness is not just a Lovecraftian argument for the tenuous nature of reality, though—it’s also a deft exploration of the cult of the horror writer.

As a writer who frequently attempts to work within the horror tradition myself, I’m attracted to these narratives of powerful horror writers, the bestselling author who creates nightmares so real that readers can’t escape them, even after they’ve put down the book (or, in the case of Madness’s Sutter Cane, before they even begin to read it). Although horror as a genre is fairly niche (just as an experiment, take a look at the “Horror” section of any local bookstore—it’s going to be full of King and Rice and very little else), the idea of horror novels, and the mysterious writers behind them, is still quite potent. While Lovecraft was, in reality, a dour-faced, pinched-mouthed xenophobe, and most contemporary horror figures are anything but mysterious (think of chatty, dorky Stephen King, a baby boomer in love with classic rock and corny jokes), there’s still a patina of danger around writing horror stories. When you write horror, people are always quick to ask Where do you get your ideas? The question seems to imply you owe the world an explanation, so that people don’t imagine your basement is full of bodies.

In the Mouth of Madness introduces us to John Trent (Sam Neill), the sort of researcher/detective figure that often shows up in a Lovecraft story. Trent is an insurance investigator called in to help track down missing novelist Sutter Cane (Jurgen Prochnow), whose book, In the Mouth of Madness, was supposed to be turned in to his publisher weeks before. People are already in a frenzy over Cane’s previous books, which have caused psychotic breaks and violent behavior. We see this made explicit quite early on, in one of the film’s best sequences, when Trent is with a friend at a coffee shop and Cane’s agent—crazed from reading his client’s work—attacks them with an ax. We first notice Cane’s agent through a window, as Trent and his friend are talking nonchalantly. The scene takes its time, the ax-wielding maniac drawing closer and larger, as his unsuspecting victims drink their coffee, unaware, until the window smashes and they see how close danger has come. It’s a perfect illustration of one of the film’s main messages: regular life is simply a comforting fiction that we all use to keep ourselves from noticing that the universe is entirely random and full of terror.

The ax can come down at any time.

Trent survives the attack and takes on the job to find Sutter Cane (Neill plays Trent as a snarky doubter, convinced Cane and his representatives are staging his disappearance, ax attack and all). He travels to the fictional town of Hobbs End, New Hampshire, where all of Cane’s work is set. To Trent’s surprise, the town is actually there, inhabited by the people described in Cane’s novels. He also finds Cane himself here, retreated into his own nightmare-scape in order to write a novel that will bring forth the old, mad Gods (much like the “Great Old Ones” in the Lovecraft universe, terrible Gods with great power who have fallen into a sleep).

I readily admit to feeling a shiver of delight when thinking about the possibility of calling up some great, terrible deities by way of a paperback novel with a sordid cover. As a kid, I read my first horror novels in secret, with a flashlight under my blankets, hoping desperately that nobody would find me still awake and attempt to take my book away before I got to the end. I remember this particular type of nighttime reading as hungrier than any reading I’ve done before: I felt desperate to know what I shouldn’t know, to read things that I knew would give me nightmares, and to make it to the end. While some people reach secretly for the “dirty” books on their parents’ bookshelves in order to get a taste of the adult world we kids are not supposed to know, others, like me, reached instead for novels with blood-spattered axes and knives on the covers. These two towering, intersecting concepts—Eros and Thanatos—are the first great curiosities of adolescence. We begin to understand that we can die, to understand the fear of ultimate endings, right around the same time we begin to realize that the boy or girl in the seat in front of us in homeroom makes us feel funny in places we had never really noticed before. In this way our books, the ones we read when searching for ways to understand the new terrors and delights of the adult world, call up the sleeping Gods of sex and death.

In the Mouth of Madness ends, as most of Lovecraft’s narratives do, with the detective finding a great tear in reality, glimpsing a subterranean, sinister (or, to use the Lovecraftian word, eldritch) world, and promptly going mad. Much like my teenage self, tucked away in bed with a copy of It, Trent cannot help but look as Sutter Cane unveils the monsters he has unleashed upon the world, even as he knows that what he might see could be far too much for him to understand. And here lies the problem with translating Lovecraft to film: how do you give the viewer a truly convincing glimpse of the maddening underbelly of reality, of the dizzying sense that the universe cares not one iota for our human concerns—that we might all be but the dream of some sleeping God, or the clumsy words of some hack horror writer?

In the Mouth of Madness ultimately can’t express this horror, not fully. Still yet, it aims high and succeeds in reminding us of that feeling you get when reading a horror novel that absorbs you completely. It manages to create doubt, to make us wonder if it’s possible that, simply by reading or writing, we can create or destroy our small, sweet, ordered reality. After all, as Lovecraft himself once said, “There are horrors beyond life’s edge that we do not suspect, and once in a while man’s evil prying calls them just within our range.”

Letitia Trent‘s work has appeared in The Daily Beast, Fence, and 32 Poems, among others. Her books include the upcoming Almost Dark (Chizine Publications), Echo Lake (Dark House Press), One Perfect Bird (Sundress Publications) and several chapbooks. She is a horror film blogger for X Factor Films and lives in Colorado with her son, husband, and three black cats.