A Postscript to Working Girl (Or: “Tess McGill Doesn’t Like Others Doubting What She’s Earned”) 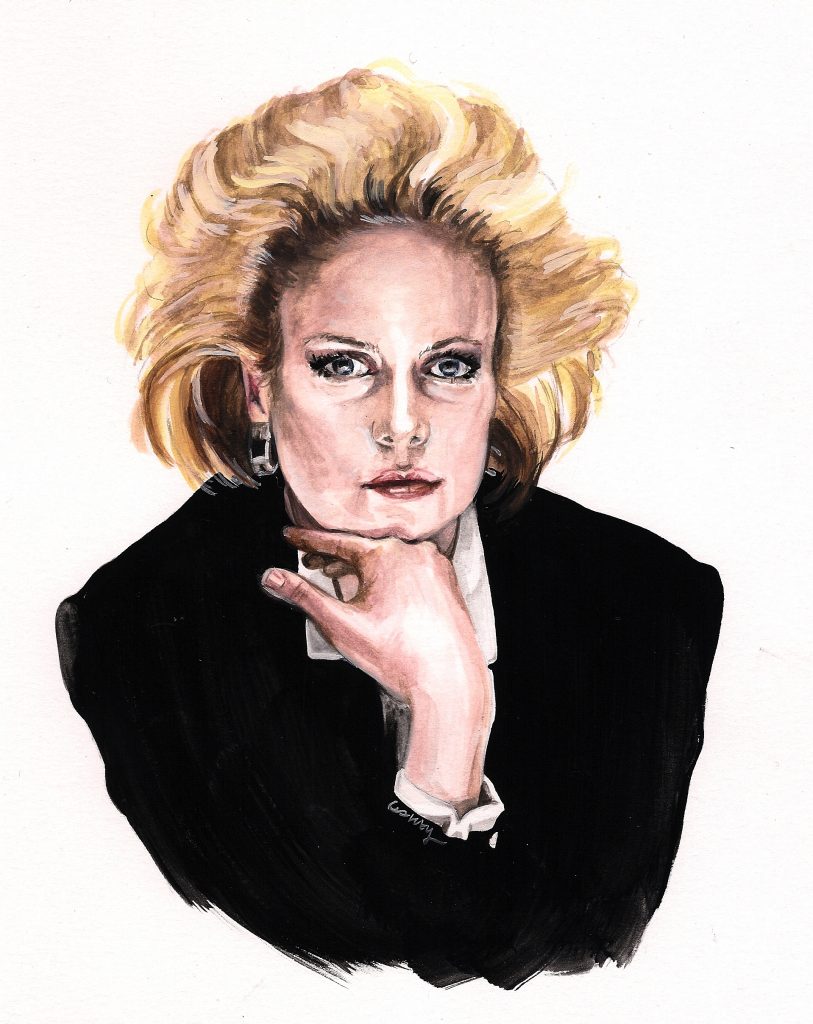 I’ve been at Trask Industries now for a few years. Moved up a few floors, got a new secretary. I go to meetings, I wake up early to keep up on the reading necessary to be ahead and not behind in this business. I’m as important to this place as any man, but I still feel the raised eyebrows as I walk by, and the skepticism any time I pitch a merger.

Yes, these are some things that happened: I keyed “David Lutz is a sleazoid pimp with a tiny little dick” into the company ticker; I drunkenly told my boyfriend, “I have a head for business and a bod for sin”; I took over my boss’s apartment and job and closet while she was laid up with a broken leg in Switzerland.

Because, the thing is, I’d been operating at a low level of anger for so long, by the time all of these things happened, I was primed and ready to go for it.

No one thing pushed me over. I’d been on the brink for awhile.

I thought Katherine was going to be my ticket out. When she walked into the office on that first day, there was such a hush from everyone around her. She seemed like the kind, no-shit-taking mentor I needed. When I told her how I’d never worked for someone younger than me before, or for another woman, she asked if that would be a problem.

She backed me into a corner. After finding out she planned to steal my idea, and then going home and finding my boyfriend in bed with our bouncier neighbor, I decided I had two options: back out, or go all in. So I put on my boxing gloves. I got a haircut (“You want to be taken seriously, you need serious hair”) and I scheduled a meeting to move forward with my plan on my own, without relying on Katherine’s “kindness” to guide me.

Which is all what got me this job: I called Katherine out for being backhanded and having a bony ass, and Trask offered me this position, because he liked the pluck he saw in me.

I was pretty scrappy in my day.

Although, to be fair, I still am. You have to be, here. You have to be scrappy to earn your seat at the table, and as soon as you do, you have to continue to prove yourself, again and again, day after day. That one first win that you fought so hard for has to become three wins a day.

This is how it is in Manhattan. You falter, and there are hundreds already dressed and stilletoed and ready to step in. An average day in New York is full of bruises and set backs.

It can get pretty lonely, too. I came to New York from Staten Island. No one there gets what I’m doing in the city, and no one in the city gets where I came from. Combine that with being a woman in a mostly male workplace? There will be days you feel like no one speaks your language.

You have to have the nerve to be pushed and push back. There’s a mettle in staring down a superior and winning. But how do you teach that? I grew up with it. I’m scrappy and alien to this world, and I want it. I wake up wanting it and I fall asleep wanting it. I’m doing well for myself, but there’s always another rung ahead of me, and I’m always leaning toward it, grasping for whatever I can grab.

I don’t vacuum my boss’s house while topless anymore, and I don’t have a boyfriend that gives me lingerie for my birthday. I have a woman at Saks that sets aside all the hot pant suits with shoulder-pads. I still occasionally buy dresses with bows on them, but only for special occasions. My accessories are understated and professional. I dress in neutrals and only hairspray my hair to a certain height.

I wonder how much of this the others understand, and how much they don’t, whenever I can feel their incredulity following me down the hallway. I’ve earned everything I have. I’ve fought for it and I don’t regret anything. But it’s not all rainbows.

So when you look and me and make a jibe about me getting my “happy ending,” you’ve got it wrong. That term is a misnomer. It’s one moment and it’s one win, but then you move on and have to confront the reality that win got you. You have to keep proving that you earned that Happy Ending, even if you move on from that job and that boyfriend.

If I seem angry or indignant, it’s because I still am. I have to be. My Happy Ending was more like a semi-colon. I still have to finish the story.