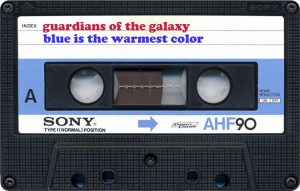 If you saw James Gunn’s Guardians of the Galaxy last year—and, judging by the numbers, you probably did—what do you remember about it? Do you remember the characters? Sure. There are couple of odd ones, like a talking raccoon and a trisyllabic tree. Do you remember the visuals? Maybe, though they’re mostly stock sci-fi CGI, not far from Star Trek Into Darkness. Do you remember the plot? Probably not. The titular group-in-the-making chases down an orb containing an Infinity Gem, a MacGuffin that ultimately matters more to the Marvel Cinematic Universe than to this particular outpost.

Here’s what you definitely remember about Guardians of the Galaxy: the soundtrack. A compilation of seventies pop rock, it lends the film its fizzy edge. Indeed, the movie opens not on some distant planet but on “Earth 1988,” with a static shot of a truly alien object, a 1979 Sony TPS-L2 Walkman. The Walkman belongs to a kid named Peter Quill, who, as the film begins, is sitting in a hospital, listening to 10cc’s “I’m Not in Love” and waiting for his mother to die. Through the plastic window of the Walkman, the spools of a tape whirl. Its title, scrawled in all caps, is AWESOME MIX VOL. 1.

The mix, a gift from Peter’s nearly and then dearly departed mother, becomes the soundtrack for the film itself after the boy is whisked light-years from the hospital to a galaxy far, far away. A grown-up Peter, aka Star-Lord, strolls along the surface of Morag, home to the mysterious orb, while listening to Redbone’s “Come and Get Your Love” on his Walkman; the Raspberries’ “Go All the Way” blares from the stereo of Star-Lord’s spaceship when he flees the planet, orb in hand. As the sphere ping pongs from party to party, so too does the soundtrack bounce from one bubbly seventies hit to another: Star-Lord and the Guardians escape the prison planet of Kyln to the strains of Peter Holmes’s “Escape (The Piña Colada Song)”; the Guardians gear up for their battle with the villainous Ronan the Accuser as the Runaways’ “Cherry Bomb” bristles in the background; the Five Stairsteps’ “O-o-h Child” plays amidst the wreckage of their final showdown.

Part of Guardians of the Galaxy’s appeal (maybe its primary appeal) is the way it marries its MOR soundtrack with the fantastical exploits of Star-Lord and the gang. As Marvel Studios’ president Kevin Feige said in an interview with i09, the soundtrack “allows you to have action sequences set against … unlike anything you’ve ever seen in a sci-fi space opera” at the same time it acts as “an emotional anchor for people … [who] don’t know science fiction, or don’t care for spaceships going through space.” Despite its title, Guardians of the Galaxy always has one foot planted firmly on Earth—more specifically, on the floor of your or your parents’ basement circa 1988. It’s like Star Wars if Star Wars were soundtracked with hits from the sixties instead of John Williams’s score. The extraterrestrial meets the terrestrial. The majestic meets the mundane.

The juxtaposition worked. Guardians of the Galaxy: Awesome Mix Vol. 1 became the second-bestselling soundtrack of the year, iced out only by the white-hot Frozen—a not inconsiderable feat given the film soundtrack’s precarious position in our post-album moment. “When was the last time a movie soundtrack made you feel something?” Alex Hardy asked in a recent piece. Awesome Mix Vol. 1 made you feel something. Guardians of the Galaxy inspired not only nostalgia for the songs on its soundtrack but also nostalgia for the soundtrack itself.

If you saw Abdellatif Kechiche’s Blue is the Warmest Color the year before last—or on Netflix sometime since then—what do you remember about it? Do you remember the characters? Of course: Adèle and Emma’s romance is the film’s nucleus, and so intense are Adèle Exarchopoulos and Léa Seydoux in portraying the lovers that they were unprecedentedly awarded the 2013 Palme D’Or along with Kechiche. Do you remember the visuals? Very likely. Kechiche relies mostly on handheld close-ups, forcing an intimacy that’s amplified in the film’s overlong sex scenes. Do you remember the plot? How could you not? It’s a knot tied and—after Emma asks, How could you?—undone, two bodies untwisted, two lives untangled, leading finally to Adèle’s half-lonely, half-liberating walk down a city street.

Here’s what you may not remember about Blue is the Warmest Color: the soundtrack, which is almost entirely diegetic. We rarely hear songs that the characters don’t. Save for a track at the end—a reprise of a steel-drum number that a street musician is performing when Adèle sees Emma for the first time—we hear what the characters hear, when they hear it. Music comes from the streets, from students (in a march, in a classroom), from stereos, from speakers. Whereas in Guardians of the Galaxy, a song like “Hooked on a Feeling” jumps from the headphones of Peter’s Walkman to play over a montage of his and the Guardians’ incarceration, the songs in Blue is the Warmest Color don’t overtake the frame but stay tucked away inside it, a strategy that suits the film’s naturalism. If Guardians of the Galaxysays, These songs belong to you, Blue is the Warmest Color says, These songs belong to them.

And music matters to Adèle as much as Awesome Mix Vol. 1 matters to Peter. In one early scene, she discusses musical genres with her classmate Thomas (who’d like to be more). Adèle tells Thomas that she listens to “Everything. I can get into reggae, gypsy music, classical, dubstep. Everything. Only thing I really can’t stand is hard rock. People with long hair who scream. No words, no melody – not my thing. It’s annoying. But everything else.” A chagrined Thomas replies, “Oh, fuck.” Adèle asks why. “Because my big thing is hard rock,” he answers. Thomas’s big thing is rock hard a few scenes later; Kechiche’s camera pans past it as Thomas beds Adèle, or as she beds him. But it’s not her thing. Adèle breaks up with Thomas soon after to take up with the brusque, blue-haired Emma.

Adèle talks music with Emma, too. Bob Marley is the “[s]ame as Sartre,” she tells Emma. “Have you heard ‘Get Up, Stand Up’?” Music—reggae, classical, dubstep—scores Adèle’s growing self-possession, a self-possession spurred on by her romance with Emma. At her eighteenth birthday, Adèle dances to an exultant remix of Lykke Li’s “I Follow Rivers,” mouthing along to the words as she snakes her hands skyward. It’s nothing like the hesitant, stilted dancing Adèle does to a Mark G. Hart/Stephen Emil Dudas song later on the film, at a party where she warily eyes Emma flirting with the woman for whom she’ll eventually leave Adèle. In these scenes, and in the movie at large, music serves less as a soundtrack than a witness.

That is to say, Guardians of the Galaxy’s soundtrack happens before the fact, Blue is the Warmest Color’s after. Peter’s mother gives him the mix that will soundtrack his (and our) intergalactic adventure. Only in hindsight are the songs in Blue is the Warmest Color the soundtrack of Adèle and Emma’s union and dissolution: that song that played the first time their eyes met; that song that played in the club the first time they talked; that song that played at Pride after they’d fucked for the first time. Peter’s mixtape, like Guardians of the Galaxy’s soundtrack, is constructed from the very first frame (or even before, since Gunn reportedly wrote the songs into the screenplay); the music in Blue is the Warmest Color, meanwhile, seems to arise more organically, more spontaneously, as if these were just the songs that happened to be playing there and then.

Kechiche suggested as much in an interview: “I find it very difficult to underscore or illustrate my scenes with music. However, as strange as it sounds, I hear music all the time when I am creating my films. I hear it when I watch my characters faces, when they move.” Guardians of the Galaxy’s soundtrack is determined, or overdetermined, while Blue is the Warmest Color’s soundtrack is indeterminate, almost impressionistic. The soundtrack never even received a formal release, existing only as a playlist (partially edited by me) on the website WhatSong, where users can match songs from films to the scenes in which they appear: an infinitely changeable playlist, a playlist that moves with memory.

This, after all, is the tricky business of movie soundtracks, the business of remembering, or half-remembering. The soundtrack of a musical likeFrozen wears its meaning on its sleeve; each song announces the part it plays in the movie. So, too, do most films’ instrumental scores, with tracks named, more often than not, for specific moments (e.g. “Morag,” “The Final Battle Begins” or “Plasma Ball,” from Tyler Bates’s Guardians of the Galaxy score). But the songs on Awesome Mix Vol. 1 or the songs in Blue is the Warmest Color are equally imbued with the momentary, with the memory of a scene, a shot, a line—just less obviously so.

In the cold January days after I watched Blue is the Warmest Color for the first time, I couldn’t get the remixed “I Follow Rivers” out of my head. I couldn’t get Adèle out of my head, either. For me, the song became a way into and out of the film, a way to remember its hopes and heartbreaks, its passions and promises. Like a novelization or a licensed video game, the soundtrack became a way for me to experience the film again, to experience the film anew, no different from reading the graphic novel or the comic upon which Blue is the Warmest Color or Guardians of the Galaxy is based.

We don’t tend to talk about soundtracks in this way, as adaptations in their own right, but we should. Every soundtrack is an awesome mix not just of songs but also of our half-remembrances of the films in which they, and then we, play a part. Guardians of the Galaxy and Blue is the Warmest Color foreground this fact by asking, Remember? Remember remembering? Songs, they say, can be decontextualized and recontextualized; songs can drift from soundtracking a film to soundtracking our lives and then back again, on and on, ad infinitum, from star-crossed loves to the constellations of a distant galaxy. These songs belong to them. These songs belong to us.

Kyle Meikle is a doctoral candidate at the University of Delaware who researches and writes about adaptation.