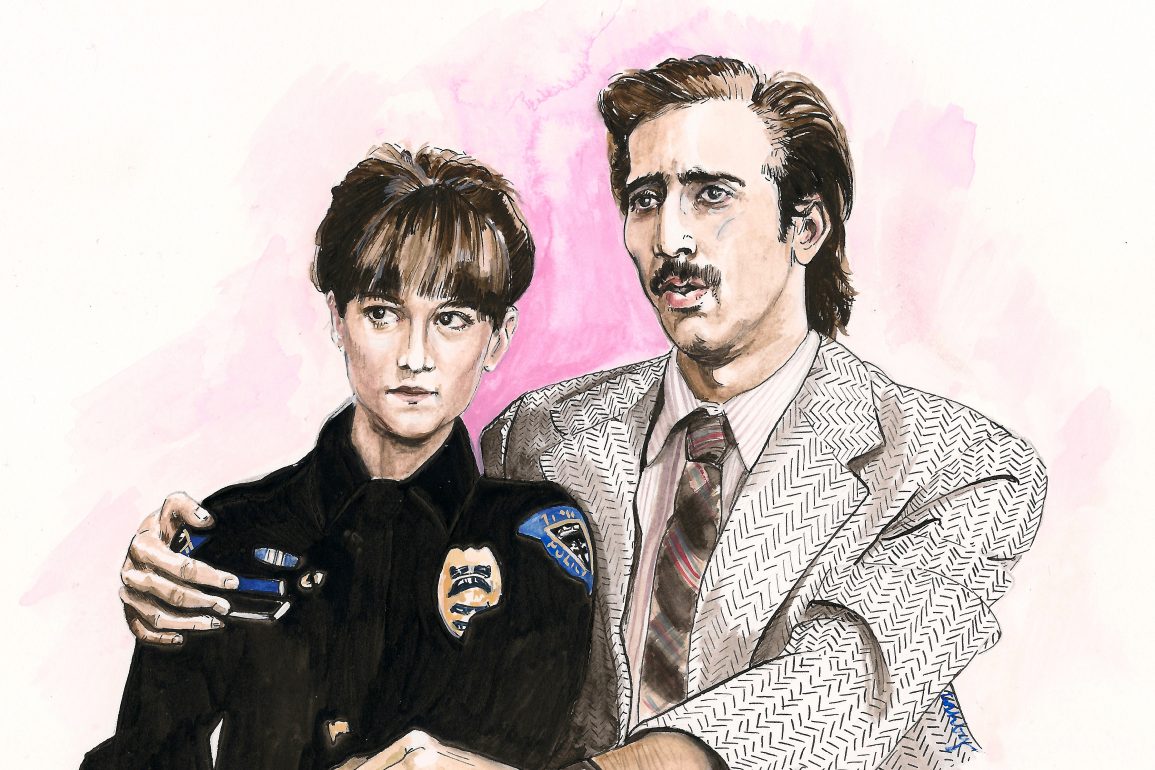 Far From a Good Thing

Fran Hoepfner
I don’t do well with love stories. I skip through parts of Moulin Rouge! without shame. I spent most of a viewing of Sleepless in Seattle on my phone. Call me a masochist, call me a pessimist, call me whatever, but I’m so much more interested in a Revolutionary Road or Force Majeure collapse of a relationship than I am watching the story of two crazy people who fall in love. That’s boring to me.

Thankfully, Raising Arizona is a comedy. It’s a really funny comedy, with manic physical comedy and ludicrous situations; characters get slapped and tripped, they get punched, they fall. They fall spectacularly. I laughed when I watched it. I didn’t laugh the way I do at most things from the past few years. Recent films want you to know how clever they are. They want you to nod or chuckle quietly and say, “Yes, I understand this is a clever joke,”

Raising Arizona is not that kind of comedy.

But before I laughed, and before any of the zany antics get going, a man named H.I. (Nicolas Cage) gets his mugshot taken by a police officer named Ed (Holly Hunter), and I thought to myself, “Oh no. This is a love story.”

And then I watched the way H.I. looks at Ed as she takes his mugshot. “Turn to the right,” she tells him. “You’re a flower, you are,” he tells her. She glares at him. Their hands meet as she takes his fingerprints.

And I think, “Oh, these are the crazy people I want to watch fall in love.”

That said, the romance between H.I. and Ed is merely the foundation for the story of Raising Arizona; important, but what’s really impressive is what gets built upon it. The real situation at hand is what happens when two selfish people can’t exactly get what they want. H.I. – Cage in his most wiry and loosest physical persona to date – and Ed – played with tiny but fearless strength by Hunter – can’t conceive a child. This kooky duo, united in an inexplicable but powerful love, can’t do the seemingly most basic human thing.

It’s this initial frustration, this first roadblock in the path they take to normalcy, that leads them down a path of insanity. Ed asks H.I. to delve into his old criminal ways with him, and together, they conspire to steal one of the famous “Arizona Quints”––five babies born to a wealthy furniture mogul. Their theft of “Junior” leads to a whole mess, including blackmail, a vengeful, fire-spitting biker, a few dozen screams and punches, and because it’s a Coen Brothers film, John Goodman.

Raising Arizona is a film that encapsulates so much of what’s wonderful about the Coen Brothers’ work; it’s unapologetic in its absurdity. There’s little to no explanation for the madness of this film; when someone gets hit, they go flying ten feet back; every scream or shout is comic, cartoonish. It is what it is. These are two people who have a quick wedding, then jump full-on into something more ridiculous and silly than either of them could ever have accomplished on their own. You don’t doubt though. In the brief prologue of the film, the Coens introduce two characters you fully trust with their love. You root for them. They’re impossible. They’re difficult. One of them has been to jail more than a handful of times. But what they want is something we all want.

Raising Arizona is a messy, ridiculous love story, and despite the fact that it’s a film where a person literally explodes, it feels so honest about romance in a way I haven’t seen before. It’s not always a question of whether or not you love another person; it’s more likely the question of what happens when you’re together. For H.I. and for Ed, there’s scarcely a reason to doubt their dedication. But being together isn’t necessarily a good thing for them. They’re both perfectly stubborn and crazy in their own rights. Allow me to remind you: they steal a baby.

That’s not to say it’s a good thing. It’s far from it. H.I. and Ed disagree like a normal couple. He keeps his friends over too late, and they’re too loud and disorderly. Ed wants him to be more of a presence around the house. There’s a heightened level of tragedy to H.I. and Ed’s arguments being so normal, so grounded in recognizable tropes, in the realization that they’re not special. Their whirlwind crazy romance–and it is, no doubt, crazy–suffers from the mundanity of everything else. Their problems may be wacky and far-fetched, but they suffer and hurt like everyone else.

Towards the end of the film, H.I. takes a moment to reflect on his relationship as he and Ed return their stolen baby to the Arizona household.

“I think the wife and me are splitting up,” he explains to Mr. Arizona (Trey Wilson). “Her point is that we’re both kind of selfish and unrealistic, so we’re not really good for each other.”

H.I. hasn’t fallen out of love with his wife. In fact, by the end of the film, it’s possible that he cares for her more than he ever has before. But he recognizes, in perhaps the most sympathetic scene in the film, that their relationship is not necessarily a good one. It’s possible to love unconditionally and still know that things are bad and selfish and ridiculous when you are together.

I spent so much of Raising Arizona laughing but at this final moment, I thought, “this is so sad.” There’s little resolution left beyond H.I.’s realization at the end. He decides to sleep on it, and dreams of a type of paradise where he and Ed, still childless, grow happy and old together. But of course, that is a dream.

What’s left, then, when everything falls to the ground? Can you rebuild love even after it’s left scorched trees and ash in its wake? When he wakes up, there’s still a whole reality out there. There’s always room for rebuilding but there’s also room to walk away to another place altogether. One has to wonder what would have happened if H.I. and Ed had stuck to the original plan: settling down, being a normal family. They might have stuck it out. They might have made it. But knowing them, knowing their extraordinary circumstances and their larger than life universe, it never would have played out that way. It would have always crashed and burned in the most spectacularly explosive way possible.

In the end, there’s a desert stretching on, and two people who should perhaps be far, far away from each other. A quiet Arizona wind just stirs in the night.