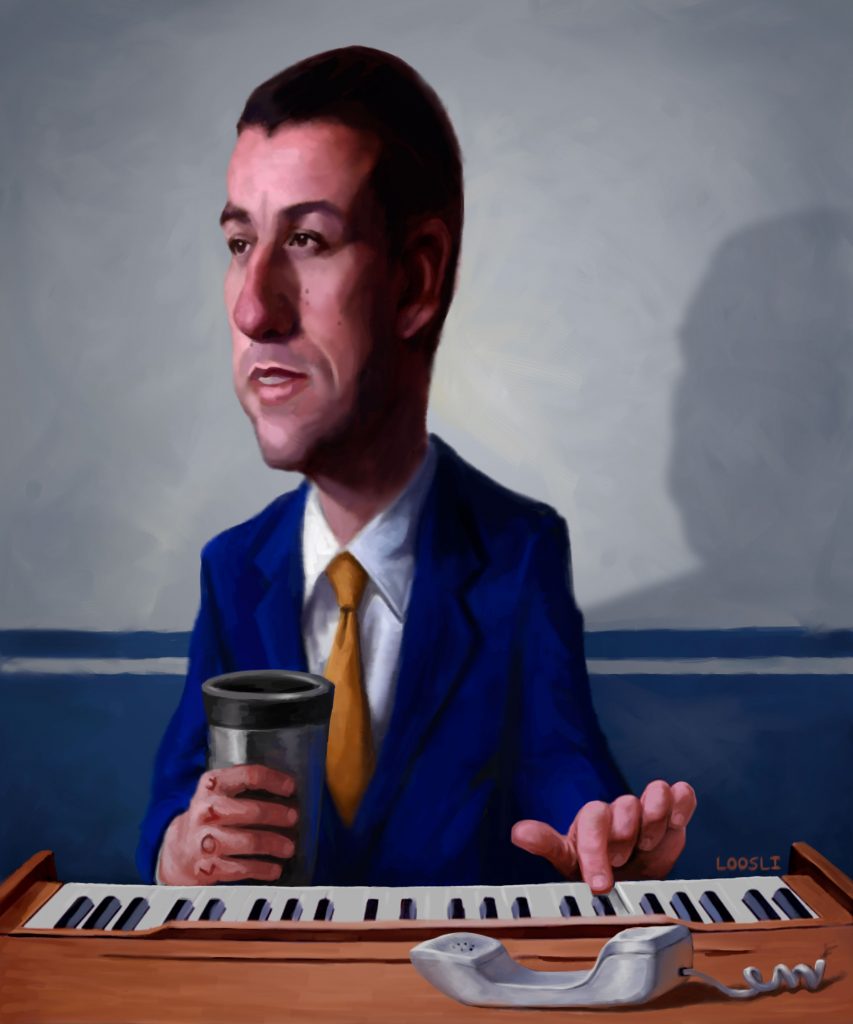 illustration by Blake LoosliI wasn’t allowed to keep the door closed. I never got an explanation, though I had to guess that it was at least somewhat related to the house rule that limited me to electric razors. So I’d watch the den TV on low, developing a friendship with the even-numbered movie channels as I grew more and more adept at blocking out the curiosity of what my fellow fifteen-year-olds were up to, the desire to have been invited along, and the throat-swelling dread that accompanied the thought of actually going. On one of these glory day Saturday nights, I hit a movie I’d heard of: Punch-Drunk Love. That Adam Sandler one—though, as critics promised, it’d be Adam Sandler “like we’ve never seen him before.” The movie kept that promise. And then some.

Barry Egan, Sandler’s character, was many things I had never seen before. He was the courier of a cinematic style that was altogether new to me: half-sprinting from an alleyway curb to his warehouse office with a lopsided harmonium in tow, Barry was the focus of the very shot that taught me that movies could, and should, look interesting.

He was a type of character that I wasn’t used to. One who didn’t smile, command rooms, fan out statements of certainty, or whisk anything anywhere. One who had to swallow his tongue whole in order to trudge through a conversation with loved ones. Whose insides turned aluminum at the sound of his sisters’ voices. Who suffered anaphylactic shock when asked difficult questions.

He was a class of human being that I had always been sure consisted of only one member; he was scared, he was ugly, he suffered through sentences and lost footing in the line of eye contact. He admitted outwardly to his unsympathetic brother-in-law that he didn’t like himself, which was something I didn’t know other people felt. I certainly didn’t know they were allowed to say it.

And, in a state of panic, humiliation, and guttural derision, he smashed the hell out of his sister’s kitchen doors.

The scene played at a volume just shy of inaudible on my den TV. But blaring through my mind as Sandler lay waste to life-sized plates of glass, much to the chagrin of his resentful family, was a supplemental soundtrack—a thought I didn’t know I could have, and one I didn’t like: “That’s what I would do.”

Having seen only bits of Magnolia and knowing Boogie Nights by name alone, I hadn’t been exposed to Paul Thomas Anderson’s dark grace before Barry took out that glass. It was the first time I saw this kind of pain really accessed, in the movies or beyond. Barred from the dangers my parents deemed intrinsic in a closed door or a razor blade—or from those I’d grow breathless just imagining as part of a night out with kids my age, a phone call to friends—I was kept from everything the cruel world of Punch-Drunk Love doled out at Barry.

Lucky enough to lead a lifestyle moreover absent of extortive phone sex operators and their bonehead thugs, I managed to hide well enough from triggers. To pretend there was nothing to trigger at all. To go on not talking about why I wasn’t allowed to close doors, or shave like the other boys. To go on assuming that there wasn’t a name for this—that it was just my lot to deal with quietly.

But Barry, an Adam Sandler performance, movie character, and human being that I had never seen before…Barry was all too familiar.

Then, at that monumental instant of glass door annihilation, Barry became something in me that I hadn’t realized existed. And once I hit the scene wherein Sandler goes ape on the team of criminals who put his beautiful new friend’s life in danger, beating the nerve out of them with his bare fists and a tire iron, he was something I couldn’t accept that I also might be.

So I changed the channel. Something nicer.

Still, Paul Thomas Anderson stuck with me. From then on—when I’d grab desperately for any semblance of a coherent sentence, when I’d shuffle across crowded rooms with the fluidity of a pixelated arcade avatar, when I’d assess the slouch I’d have to face daily until modern technology came up with a preferable alternative for the mirror—I’d allow myself memory of Barry, a character who, inscrutably, I was allowed to root for.

He was the reversal of the cinema’s longstanding view on our breed of freak, but at no expense of authenticity. What John Hughes did for brains, Richard Linklater did for slackers, and Cameron Crowe did for the uncool, Paul Thomas Anderson had done—and continues to do—for the freaks, creeps, weirdoes: John C. Reilly in Hard Eight, Philip Seymour Hoffman in Boogie Nights, William H. Macy in Magnolia, Joaquin Phoenix in The Master, and Barry at the top of the heap. A film hero for a community of individuals so isolate that they couldn’t even consider themselves part of that community.

Though I didn’t finish watching the film, I had seen enough to know what came after the stammering. I felt too close to Barry to categorize his latter actions as fantasy. When my jaw would grow sore from anxious gritting, I’d imagine what was to follow: am I about to snap? Will the victim be my parents’ windows, the next band of rude strangers I pass, or someone of value to me? With a clear picture of just how bad things could get, courtesy of an earnest and merciless Anderson, I no longer had the luxury of simply biting my lip and keeping the volume down. I did what was then the most difficult thing for me: saying something. I need therapy. There was a lot more stammering involved, but you get the idea.

Ten years passed before I gave Punch-Drunk Love a second go. At twenty-five, I was far better versed in film, and leagues more social; I do still only shave with an electric razor, but some habits die hard. Immediately upon completing Anderson’s 2002 picture for the first proper time, I regretted all those years spent in dread of Barry’s ultimate fate. Imagining just how far down into his own pitch black crevasse he might tumble, and whom he might drag down beside him. All this time spent in terror over my likeness to this guy, and I never knew he wound up a winner.

But I don’t mind anymore. Here and now, still a far cry from eviscerating the Barry in me altogether, it’s nice to have Punch-Drunk Love’s happy ending in my pocket. At fifteen, I wouldn’t have been up for the task of reading into its ambiguity, likely taking the final scene as an endorsement to fly off to Hawaii on a misguided quest for self-fulfillment. I didn’t need the ending back then. I just needed to see a Barry Egan. The sort of movie character that wasn’t easy, pleasant, or attractive. The sort of hero who couldn’t speak, smile, swallow, breathe, or bear the threat of the human eye without it feeling like the end of the world. The sort of person whom I had never seen before, but whom I had known too vividly for a very long time.

And whom, thanks to Paul Thomas Anderson, I realized I wouldn’t have to know forever.

Michael Arbeiter is a staff editor for Hollywood.com, as well as a writer of film criticism, fiction, and excellent birthday cards. He lives in Brooklyn, New York.