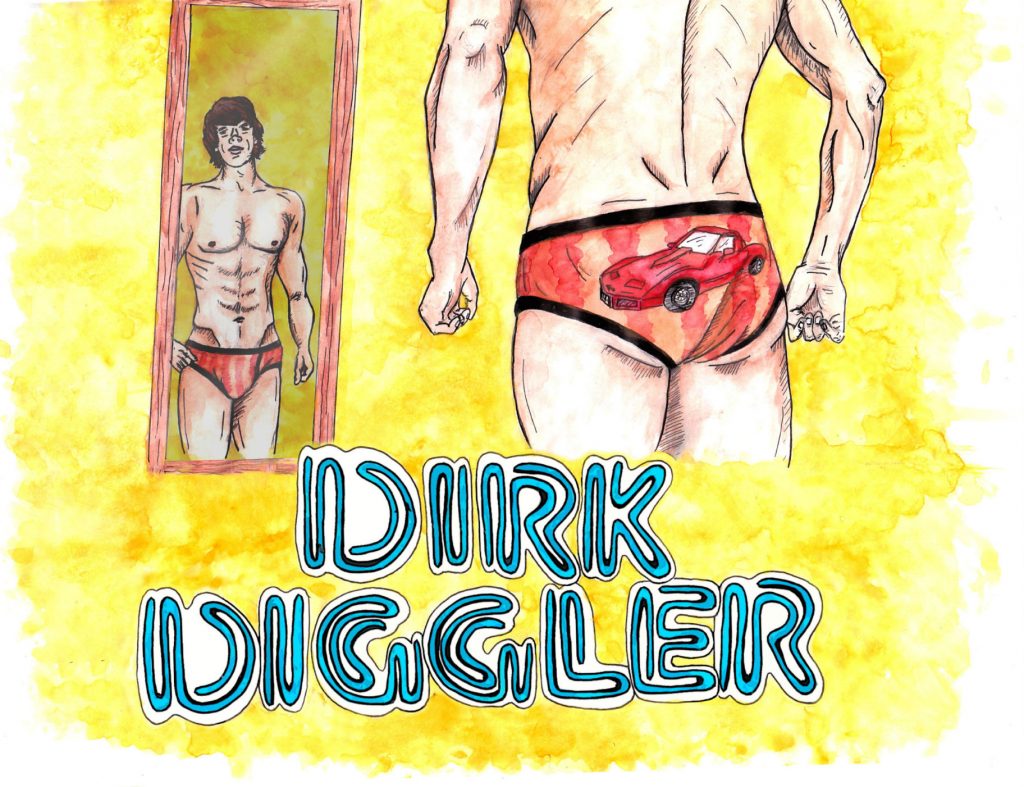 illustration by Elizabeth Vazquez The thing about “rock bottom,” about actual real rock bottom, is that anything is an improvement.

To most of us—watching Intervention or gossiping about a former colleague or talking about a tragic character in a film—the part that comes after “rock bottom” is often pathetic, silly, sad. She’s a cashier at Macy’s now we say with a wry shrug. Apparently he’s, like, selling Bibles on the subway or something. We shake our heads and sip our coffees and feel bad for these people and marinate in the misfortune of their lives and love every second of it, this ability to judge and conspiratorily make sad faces at each other over $5 lattes. We will not hit rock bottom. Anyway, if we did, we’d climb out of it with a lot more grace.

I let this elegant mental composite satisfy my curiosity about the movie for over a decade. It was just, you know, the Giant Dick movie. What else did I need to know?

The great thing about Boogie Nights is that if you go into it assuming that it is just Paul Thomas Anderson’s Giant Dick Fun Porn Film, it doesn’t dispel that (misguided) belief too quickly or harshly. It breaks you in slowly. It lulls you a bit into feeling like you DO have this film’s number, that you’ve been right all along. Sure, you might feel an initial, subtle disturbance when you see Mark Wahlberg in that first scene—his youth (not a virile youth, but a youth that should still be drinking OJ, riding bikes). But you can get over that, and, you know, it’s Burt Reynolds, being awesomely sketchy, and yeah, Heather Graham does have awesome tits, and okay, you’re titillated, you admit it, by the world in which Eddie Adams (soon to be Dirk Diggler) gets swept up.

Anderson’s camera moves so seductively you’re barely able to separate the sensation of the world from its reality.

There are the skates, and the dizzy kisses, and the colors, and the lights. There are the smiles and the promises and the mirrors and the dollar bills. There is the beautiful push and grind of it all. There is an intensity, which you won’t figure out until later is there simply because all of the pieces of this world are trying so very very hard to stick together. To coalesce into something resembling a structure.

When things start going south, you’re just as nervous and thrown off as Adams/Diggler himself. In fact, you find yourself in the position of Little Bill (William H. Macy), the cuckolded assistant director, walking in upon scene after scene that you’d give anything to un-see. Getting viscerally upset, but ultimately resigning yourself to your impotence to change anything. Or, better, convincing yourself that it won’t happen again.

When Little Bill finally can’t take it anymore, when he shoots and kills his wife and her lover-of-the-night (on New Year’s Eve, no less), and then casually rests the gun in his own mouth and blows his brains out, you know there’s no going back. Raise a glass to the new year, the new decade. The 70’s are gone, and with them the bubble gum-flavored mixed drinks and the good-natured fondling. It’s 1980: coke and upper-arm bruises from here on out. All the resolutions in the world can’t turn this car around.

(And we know what this is like, we people watching this film on the other side of 9/11, on the other side of the 2008 financial collapse. We know this way life has of giving you cocktail parties and backyard pools and free drinks and business propositions and then yanking it out from under you in a split second and leaving you with the pieces. How you put them together again is up to you. Some get caught up in the details of the thing. Some take the pieces and paint them and make them into cabinets and dressers in which to store their secrets. Some cry. Some run. Some just get down on their hands and knees and fashion them into whatever shape they can manage.)

Of course, by the time you want to turn the car around, it’s too late. The car, the “competition orange” Chevrolet Corvette that Diggler buys as a symbol of his new lifestyle, which prompts sad, lovesick Scotty (Philip Seymour Hoffman) to paint his own car the same color. The car, the limo in which Rollergirl rides around on her producer-dictated quest to find random strangers who will have sex with her on camera. A too-real car. A car that can take you for miles and miles—past donut shops and coked-out girls and parking lots with all the wrong people waiting in them—but will, in the end, only spit you out further away from where you were to begin with.

At their hearts, Boogie Nights and There Will Be Blood share a key notion: your greatest asset (some pun intended) too often ends up being your greatest curse. Anderson seems fascinated by the ease with which people subconsciously self-sabotage. The inexplicable urge to take what we’ve been given and destroy ourselves with it. Daniel Plainview’s single-minded obsession with oil brings him money, success and dominance in the industry, but alienates him from his son, his sense of humanity, and even his own body. Eddie Adams’ gifted endowment brings him the exact same three things (money, success, dominance in the industry) and costs him many of the same things as well—his family, his physical health, and his sense of reality.

And it’s this last loss that’s both the most terrifying to contemplate and the most horrible to recover. For, in the end, though Diggler understands how bleak his life has become, how far in execution from whatever his imagined vision was all those years ago in front of the mirror in his parents’ house, he also realizes that he’s crossed the point of no return. That he no longer has the option to live a “normal life.” His reconciliation with Jack Horner (Burt Reynolds) and return to the Oedipal arms of Amber Waves (Julianne Moore) can’t even be described as bittersweet; it’s the voice of despair, the callous touch of you-never-really-had-it-in-you. It’s just plain fucked up.

Anderson’s genius comes in his ability to make this scene simultaneously terrifying on a primal level, meditatively self-reflective, and darkly optimistic. We cannot really separate ourselves completely from Diggler here. It’s partly a trick of the camera—forcing us to see Diggler’s reflection as our reflection—and partly a twist of the soul. We have all stood there, staring at our own assets, convincing ourselves that our outward appearance (our new hair cuts, our expensive shoes, our perfect nails, our smiles, our jawlines) somehow makes us worth something. And what’s more, we have all succeeded.

(Is it a lie if it has the desired effect? Is it wrong if the placebo works for you?)

The thing about “rock bottom” is that anything is an improvement. Diggler’s return to the fold, as distorted and disappointing as it is, is nevertheless something safer and better and kinder than the nights spent trying to sell his body to anyone who’d take it. What do we do in the face of the rapidity with which the industries around us are changing but forge on, keep doing what we know, do it even as we feel it’s been corrupted, do it in the face of videotape or of Twitter or of climate change or of robots. And this is a strangely comforting thing, this insistence on maintaining some faith in what got you to where you are now—this belief that, despite the turning world, we can stay relevant. We can keep using pencils, we can understand it all.

Elizabeth Cantwell is the Managing Editor of Bright Wall/Dark Room. She is the author of one full-length book of poetry, Nights I Let the Tiger Get You (Black Lawrence Press, 2014) and a chapbook, Premonitions (Grey Book Press, 2014). She lives in Los Angeles with her husband (screenwriter Chris Cantwell) and their son, and teaches Humanities at The Webb Schools.