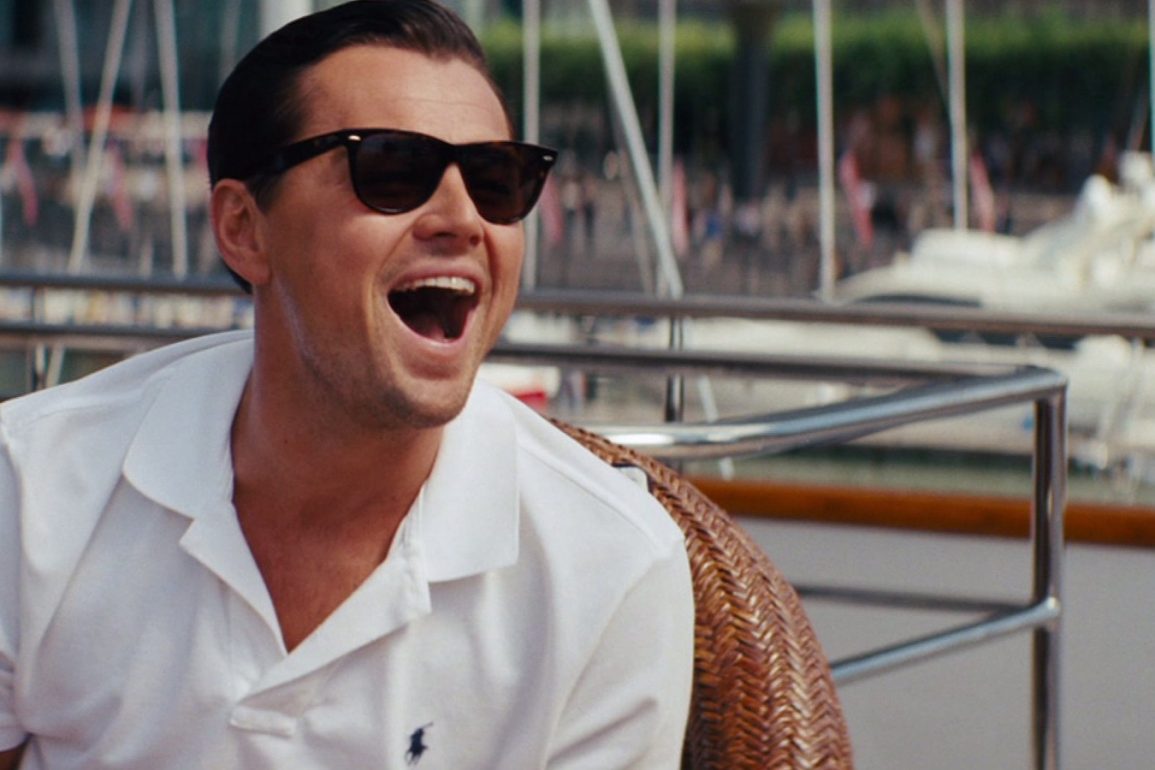 Paramount Pictures
Do you remember the first time you watched The Wolf Of Wall Street?

Better yet, do you remember the first time you felt uncomfortable watching The Wolf Of Wall Street?

0-38 minutes: I have a relatively strong stomach. Physical violence—blood, guts, limbs being hacked off—makes me queasy, no doubt, but I have a fairly high tolerance for most everything else. I’ve been a comedian for years now, so I’ve heard every disgusting combination of words imaginable. I’ve never really been one to turn away from a sex scene either, which, for the most part, are so brief and unrealistic that I scarcely pay attention to them.

Knowing that, I should say that I can successfully make it 38 minutes into The Wolf Of Wall Street without so much as batting an eye. And that’s saying a lot. Martin Scorsese’s most recent feature film opens with the title character—the Wolf himself— Jordan Belfort (Leonardo DiCaprio, never better) physically abusing dwarves, receiving oral sex in his car, and snorting cocaine off the, ahem, ass of a prostitute. All of this, of course, includes a relentless string of curse words.

But like I said, I’m all right. The first half hour of The Wolf Of Wall Street is more or less the prologue. As a viewer, we’re introduced to the bright-eyed and bushy-tailed Jordan, recently married, starting his first job on Wall Street. He’s taken under the wing of an older broker: a charming but sleazy Matthew McConaughey (in other words, a Matthew McConaughey type). Under his guidance, Jordan learns what he needs to know to survive on Wall Street. Namely, he’s introduced to his future vices: drinking, drugs, and sex.

Throughout the next half hour, Jordan is taken down and rebuilt. He loses his first job and transfers out to a do-nothing sales position in Long Island. There, however, he meets a string of office losers who one day make up his league of perverse gentlemen. At the helm of this team is Donnie Azoff (Jonah Hill, with terrifying false teeth)—a yes man to the core. Donny quits his family business on the spot when he learns how much money he can make from Jordan. Donny’s obsessed with Jordan, idolizes him. Donny is the embodiment of greed—marrying his own good-looking cousin so no one else would. Jordan wins you over (maybe) with his charm; Donny is the stuff of nightmares. The two join forces and head all the way back to Wall Street. There, the team founds Stratton Oakmont, the firm that would build and destroy them.

38-40 minutes: It’s relatively innocuous, all things considered, but the first time I cringe in this film is when, at the end of a successful sales week, Jordan offers $10,000 to a sales assistant to shave her head. The money, he explains, is going to be used for breast implants. There’s nothing particularly graphic about the scene. One of Jordan’s goons sloppily takes a razor to the woman’s head. It’s just the look on her face: struggling to smile along with everyone else as the men around her jeer and chant. “Scalp! Scalp! Scalp!” they holler as she fights back tears. It’s a violent, predatory act that she’s agreed to. These men more or less strip her, rob her of control of her body and she’s expected to laugh along with everyone else. There’s a permanent smile on her face throughout the ordeal, but she’s cringing. When all’s said and done, there are still long strands of hair but the boys have moved on. There are other things to entertain them, and this woman’s story ends there.

50-53 minutes: This is the first of one of the most infamous scenes in the movie; Jordan and his crew have a pool party in the Hamptons. It’s there that he meets Naomi (an utterly fantastic Margot Robbie), the Brooklyn model who would go on to be his second wife in the film. In the middle of Jordan introducing himself, Donnie bursts into the room, masturbating in front of everyone at the party. It’s a gross-out scene, meant to feel over the top, but it goes beyond that. It’d be one thing if played straight for laughs, but Donnie’s little outburst follows an uncomfortable moment of Jordan trying to verbally wrestle Naomi away from her boyfriend. The whole scene is about male dominance. It’s about saying “look at me, pay attention to me.” Naomi leaves without saying a word to Jordan, but the damage is done. She’s his.

62-65 minutes: Jordan and his coworkers threaten and assault his gay butler, accusing him of stealing money. It’s uncomfortable and it’s violent, and it immediately segues into a scene where the guys all go golfing. I’m starting to realize the worst part of all the disgusting parts of this film is how nonchalant they are to the characters experiencing everything. They shrug it off. It’s no big deal. It’s all for a laugh. They hang a man off of a balcony. They deride him with slurs. They laugh and move on. The victims—and to some extent, the audience—are left with a sense of stammering disbelief.

67 minutes: On the plane to his bachelor party, Jordan and his peers, relentlessly high, have sex with a jet full of hookers. It’s gross. I felt gross.

71-75 minutes: At what point do you stop siding with Jordan Belfort? I ask because it’s different for everyone. I ask because it’s crucial. 18 months after his honeymoon, Jordan’s life is miserable. He and Naomi fight daily. They’ve completely turned on each other.

77 minutes: Donnie swallows the goldfish of a broker (Silicon Valley‘s Thomas Middleditch, sneaking in a cameo) who isn’t paying full attention out on the floor. Everyone screams and laughs.

98-101 minutes: Jordan sexually harasses some flight attendants on a trip to Geneva to hide his funds in Swiss banks. They restrain him mid-flight. Who has the power?

115-128 minutes: Jordan and Donnie do quaaludes. This is, perhaps, the most famous scene in the film. It’s a brilliant piece of comedic acting with credit due to both DiCaprio and Hill. Their characters are slurring, sloppy disasters. They’re barely functioning and selling every minute of it. It’s modern day slapstick. It’s all physical. It’s perfect.

147 minutes: Jordan has a yacht party for a friend released from jail, practically throwing naked women at him. I’m ready to be done.

155-165 minutes: Here’s where it gets tricky. What is the climax in The Wolf Of Wall Street? I’m asking because I don’t really know. You can argue it’s the scene previous to this one, in which Jordan and Donnie and Naomi get caught in a storm on their yacht. All Jordan can think about are drugs. There’s the distinct possibility that he and his wife and best friend will die, and he asks for drugs. It’s certainly one of the most action-heavy sequences in the film. It would make a decent climax.

Right towards the end of the film, Jordan sits down with Naomi in bed. He explains she won’t be implicated if he goes to jail. It comes from a place of—well, I don’t think it’s compassion, but Jordan might think it is. Naomi is dismissive. She’s checked out months ago. Jordan pressures her into having sex. What occurs is consensual but reluctant. As Jordan gets off her, she explains she wants a divorce.

They fight because of course they do. The first and only other fight between Jordan and Naomi is tentatively played for laughs. You can laugh at it. That’s okay. There are some good lines. There are some good jokes. But this is not played for laughs. This is played for real. Jordan snorts a line of cocaine and they scream at each other over the custody of their children. As he storms through the hallway, he whips around and punches his wife in the stomach.

He punches his wife in the stomach and walks away.

To rewatch that punch makes me so painfully uncomfortable I feel sick. I’ve seen violence against women in film before. It’s not new, no, and I struggle to pinpoint how deeply upsetting and shocking it is to me. Maybe because it’s so downplayed. It’s not in the forefront of the shot. It’s towards the back. It’s done in passing. It’s not lingered on; Jordan has other places to be. It’s a heavy punch. It’s a thud. Naomi crumples to the ground.

It’s not addressed. It’s not brought up. It’s brief and it’s violent and it’s shocking and that’s all there is to it. Perhaps that’s what makes it realistic and horrifying. This is a thing that happens—not just to the wives of Wall Street billionaires, but to women everywhere. And it’s not in the foreground of the conversation. It’s off to the side. It’s put in the back. It’s a thud and a body hitting the ground, and then we’re moving on. It’s back to business and back to plot.

175 minutes: The real Jordan Belfort cameos in his own film. I don’t know anything about the man other than what’s presented on screen. He’s smiling. I hate him.

178-200 minutes: Many people love The Wolf Of Wall Street, but I’m never sure if they like it for the right reasons. For every person I know like me, who found it relentless, disgusting, horrifying, and tedious, there’s a person who found it awesome. That’s not to say I don’t acknowledge the achievement of The Wolf Of Wall Street. It’s brilliant: it lures you under a guise of laughter and boys-will-be-boys and it turns into an all-out orgy of 1%-er nightmares. But not everyone sees it that way. Some find it aspirational. Some find it hilarious throughout. When I’ve asked people about it, I wait to see what scene they bring up first.

“The scene with the quaaludes—”

“When his wife is in the lingerie and—”

No one seems to point out anything violent or too disgusting. They go for the laughs. They go for the sex. That’s fine, if that’s what you like. I respect the film. It’s gutsy and brazen. It’s not apologetic in the slightest. But I can’t say I like it. I definitely don’t enjoy it, and I’m skeptical of people who sit through the whole thing and laugh and appreciate it. I have a strong stomach but even I have to turn away. I want to know when it gets to be too much for you. The whole thing’s a contest, a power struggle, and I want to know at what point you blink.