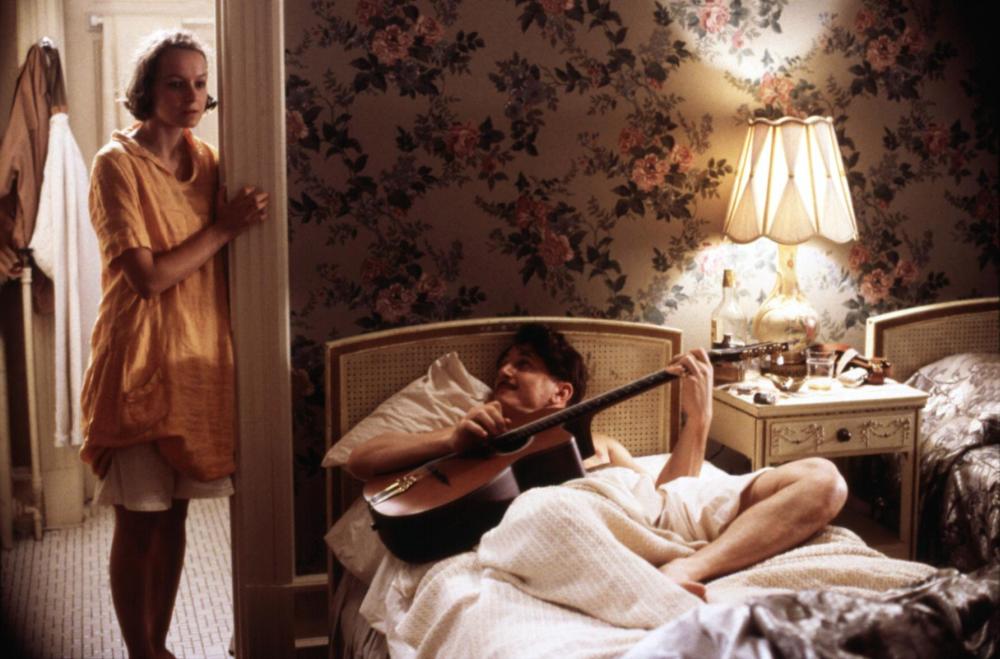 The movie begins with a close-up of Woody Allen sputtering into the camera about genius.

“Why Emmet Ray? To me, Emmet Ray was a fascinating character. I was a huge fan of his when I was younger; I thought he was an absolutely great guitar player. And he was funny, you know—or, if funny’s the wrong word—sort of pathetic, in a way.”

Sweet and Lowdown is a beautiful mockumentary about fictional jazz guitar legend and egomaniac Emmet Ray (Sean Penn). Penn’s character is blessed with great talents, and he wants the world to know it. “I was amazing the second I picked up the instrument,” he tells Hattie (Samantha Morton) on their first date. “It’s in me someplace. Like a gift of God.”

The acting in Sweet and Lowdown is out of this world. Penn and Morton were both nominated for Oscars for their convincing portrayals of a clownishly arrogant genius and his childlike girlfriend. Morton’s nomination was all the more impressive because her character, Hattie, was mute. She had no lines.

Much of the film’s power comes from the unspoken. The music is perfect—heart-rending, masterful, and precise—and Morton and Penn embody their characters with such intense physicality that it feels almost intimate. Their movements seem to arise not from their imaginations, but from muscle memory. There’s the way he swaggers onto the stage. There’s the way she avoids eye contact. There’s the ease with which he drunkenly brandishes a gun and shoves a woman, hard.

During Sean Penn’s 1985 wedding to Madonna, he grew so agitated by hovering press helicopters that he went inside, got his gun, and shot at them. One year later, Penn found a paparazzo in their hotel suite and dangled the man over a ninth-floor balcony by his ankles. In 1988 he tied Madonna to a chair and beat her senseless. She went to the police, but later dropped the charges. In 2012, Penn was elected Ambassador-at-Large to Haiti for his humanitarian work.

In 1993, I was nine years old. Dylan Farrow was seven. The headlines were filled with reports of Woody Allen’s alleged sexual assault on his own daughter. Dylan said it had been going on for years. For many reasons, formal charges were never filed. Allen went on to marry Dylan’s sister Soon-Yi, and the new scandal washed the old one away. “The heart wants what it wants,” he told the press. In 2014, he was presented with a lifetime achievement award at the 71st Golden Globes.

Last year, Samantha Morton came forward to describe the sexual abuse she faced as a child in the British foster system. She told The Guardian that adult residential care workers had repeatedly molested her and most of the other children she knew. At the time, she told social services and the police. No report was ever filed.

These were the histories they brought to the Sweet and Lowdown set.

From childhood, I was taught to love Woody Allen—not just the art, but the man. A story: when I was very young, my father and his friends went to see Allen play clarinet with his jazz band. During his set, Allen mopped his brow with a cocktail napkin. My father still has that napkin.

Another story: My high school English teacher taught us to read Allen’s films as literature and to appreciate them as art. He trained us to notice beautifully framed shots, intelligent casting, and subtle themes.

In college, I kept an autographed postcard of Allen’s face in a frame on my desk. I saw every single one of his movies when they came out, even the lousy ones. I read dozens of reviews and essays on the singularity of his work. But not once did any article mention Dylan Farrow. Not once did any review say, “It is possible to be a truly great artist and a horrible person.” Nobody said a thing about it. Not a single thing.

My life and the media were filled with good people who worshipped Allen’s genius. The entire world seemed willing to overlook his violence so completely that I had never even heard of the allegations until they resurfaced last year.

After they have sex for the first time, Emmet orders Hattie to get dressed and leave. She brings him his guitar. He lounges in bed naked, a cigarette dangling from his mouth, and begins to play. She stands in the bathroom, pulling on her clothes. You can see the moment the music reaches her: everything softens. Suddenly the world is filled with gentle, golden light, emanating from this man and his guitar.

Another night, Emmet and Hattie lay in bed, sharing the pillow talk that lovers do. But there’s no conversation. It’s only Emmet, talking about himself, and Hattie, listening intently. Emmet is a legend. Hattie has no last name.

Sweet and Lowdown would have been a really good movie without Samantha Morton. But it’s Hattie, with her quiet radiance and her silly hat, who makes this movie great.

I was a teenager the first time I saw it. I was innocent and artless, and wore my heart in my eyes. I fell in love with Hattie immediately.

Without hesitation, I modeled myself after her. I embraced her unselfconscious passion for dessert. I memorized her peculiar yet precise facial expressions and practiced them until they became my own. I learned how to love a narcissist the way he wants to be loved.

Be silent. Only listen, never talk. Make his interests your interests. Make his needs your priority. Become a supporting character in your own life. Don’t challenge him about his drinking. Don’t ever ask him why he thinks he needs a gun.

A few months into their one-sided relationship, Emmet tells Hattie it’s over. “I can’t have my life cluttered,” he says quickly. She is crying, snuffling, her face red and crumpled beneath her silly hat. Emmet is looking less certain about his decision. He nods at her emphatically, as though she should agree with him. “I’m an artist. A truly great artist.”

Can we separate the artist from the art?

I think it depends on the art. It’s easy, for example, to watch the 2003 version of Hulk and not think of Ang Lee once. Divorcing a creator from his or her creation may be possible when the two bear no resemblance, but when an auteur’s body of work is a mirror—even a beautiful, perfect mirror—you can’t take one and leave the other.

Woody Allen’s movies are Woody Allen. Even when the man himself is not onscreen, his sensibilities permeate every millisecond. His impeccable taste in music. His fascination with architecture. His fractured male geniuses, and the adoring world that enables them.

A line from Bullets Over Broadway (1994): “Does a man possessed of true artistic genius create his own moral universe?” The answer, it seems, is yes—but only when the rest of us comply.

I love Woody Allen’s movies. I won’t watch them anymore.

Fifteen years after my first viewing, Sweet and Lowdown still makes me cry, but the reasons have changed. My heart aches for Hattie, and for the vulnerable young woman I was. For Samantha Morton and Dylan Farrow and every vulnerable young woman. Where I once saw romance, I now see pain. Emmet Ray is hardly Allen’s only narcissist; he’s probably not even the worst. But his movie is my movie, Hattie is my girlhood, and Sweet and Lowdown is the one I’ll miss the most.

The movie ends with a close-up of Woody Allen sputtering into the camera about genius.

“Then he just seemed to fade away…But we do have those last recordings he made, and they’re great. They’re absolutely beautiful.”

The last time we see Emmet Ray, he is drunk and alone, sobbing wetly in a rail yard. As a man, he has failed, but it is his music Allen wants us to remember

Kate Horowitz is a science writer in Washington, D.C. She owns more than one silly hat.