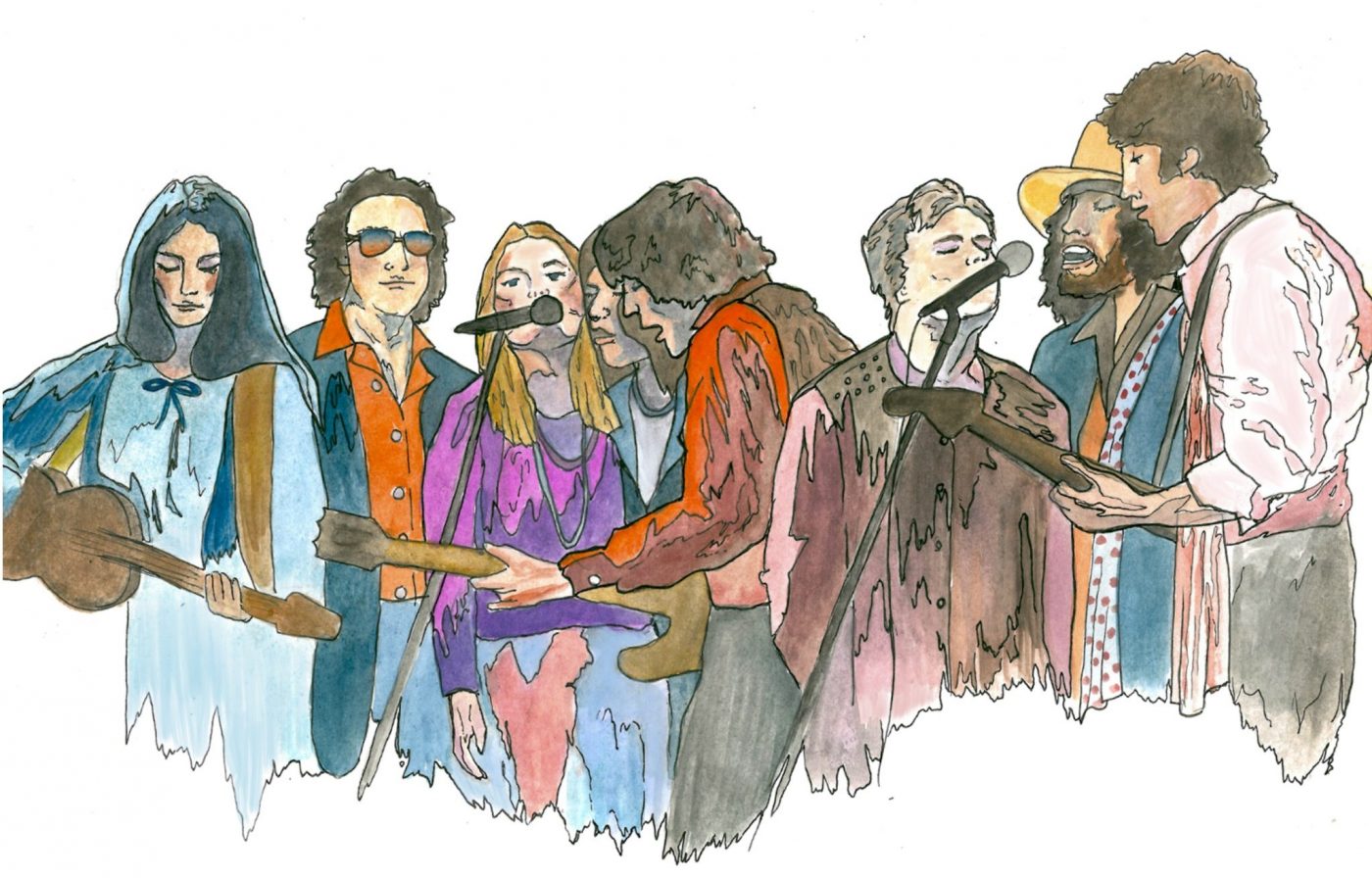 illustration by Amanda McCleod
There’s a scene in The Last Waltz where Martin Scorsese interviews Levon Helm, drummer and intermittent vocalist of The Band. It’s a rare moment in the film where Scorsese’s focus isn’t drawn around Band guitarist Robbie Robertson, who is otherwise responsible for most of the film’s myth-building and exposition. Levon is describing Memphis, the various breeds of music that flowed out of that part of the country in the first half of the 1900s. The only American member of the band, Levon was born in Elaine, Arkansas, which is about 180 miles from Memphis.

“You have Memphis…cotton country, rice country”, Levon says. “The most interesting thing is probably the music.”

“Levon, who came from around there?” Scorsese asks.

“Carl Perkins. Muddy Waters, king of country music. Elvis Presley. Johnny Cash. Bo Diddley. That’s kind of the middle of the country, you know, right there. So bluegrass or country music, if it comes down to that area, and if it mixes there with rhythm, and if it dances, then you’ve got a combination of all those different kinds of music. Country, bluegrass, blues music, show music.”

“What’s it called then?”

The Band don’t play rock and roll, exactly. They reduce it to its molecular ingredients, to country and the blues, and then recombine them. Familiar yet irregular shapes emerge from the collisions. In his book Mystery Train, Greil Marcus describes them as “committed to the very idea of America: complicated, dangerous, and alive.” This sensibility is located in the oblique precision of their rhythm section—the way Helm will sometimes subtract a beat from a chorus, and how its absence folds you into the song, like a fault line. It’s also in how they arrange acoustic instruments around the remarkable, dense, incandescent organ playing of Garth Hudson, which feels broadcasted from the future. The Band’s music, like the country it inhabits, is steeped in tradition, yet fractured enough to radiate a kind of radical possibility.

The Last Waltz conveys The Band’s anachronisms, and they’re often portrayed literally. On many of the songs performed in the film, they serve as “the band” for a constellation of their contemporaries and heroes, among them Bob Dylan, Joni Mitchell, Van Morrison, Neil Young, Dr. John, and Muddy Waters. Between these performances Scorsese threaded interviews and candid incidents that take place in Shangri-La, The Band’s Malibu studio. Most of Scorsese’s conversations are with Robertson but occasionally the camera drifts toward the other members. Sometimes the camera settles on pianist Richard Manuel, who, whenever he speaks, looks as if he is emerging from some uneventful inner depth, whether to drowsily elaborate the origins of The Band’s name (for a while they played under the unfortunate name “The Crackers”) or the rich and vast cosmology of girls on the road.

“The road” is a recurring character in The Last Waltz, wedged into the film mostly by Scorsese and Robinson. “The Last Waltz,” a concert that took place on November 25, 1976 at the Winterland Ballroom in San Francisco, was intended to herald the end of The Band as a live act after 16 years of performing together. Robertson hatched the idea and hired Scorsese to film it after seeing how thoughtfully he wove music into his 1973 film Mean Streets—e.g. Robert De Niro wading through the gauzy red light of a club to “Jumpin’ Jack Flash.” Robertson spends most of the documentary justifying his decision to end The Band; “the road” destroyed musicians like Janis Joplin and Jimi Hendrix, “the road” is no way to live, “the road” takes its toll. “I don’t think I could live with 20 years on the road,” he tells Scorsese. “I don’t think I could even discuss it.” He seems sincere but his descriptions have the painfully gathered romance of exaggeration. Robertson also engages in selective and romantic logic when connecting Tin Pan Alley’s tradition of songwriting to The Band, and then using this connection to introduce both the idea and the nacreous gleam of Neil Diamond.

Besides Diamond, who wades narcotically through his one song, the guests in The Last Waltz add animation and velocity to the set, and renew the idea of The Band as a backing band of considerable finesse and flexibility. Joni Mitchell performs one of her more complex songs,“Coyote,” the chords of which drift around like shadows, and The Band contribute a woozy, jazzy structure in which it can move unobstructed. On their own songs The Band merge together in a way that’s relaxed yet tightly woven, like the individual notches of a rope, as on “Stage Fright,” organized precisely around Rick Danko’s elastic bassline, or on “It Makes No Difference,” where on the choruses Danko, Manuel, and Helm harmonize in glossy clouds.

As a concert film, The Last Waltz is an effective document of The Band, Winterland, and the time which both occupied. The Band are encompassed throughout the movie by autumnal red light and strange, incomplete architecture rented from a production of La Traviata. Shirt collars are fanned out into excessive geometries. Neil Diamond wears massive sunglasses that do not seem to translate reality. When Bob Dylan finally appears he looks as if some part of his consciousness has flowed into the vastness of his white hat. It’s also, in a way, a document of Scorsese in the mid-’70s in that it’s a very long and ponderous movie; cocaine, a drug that makes each individual idea seem rich, accessible, and worth expressing, flows invisibly (and visibly, tracing Neil Young’s nose) through the structure and the performances of The Last Waltz.

The cameras are drawn mostly to the guests and the overactive buoyancy of Robbie Robertson, but, in contrast to the film’s excesses, their movements have gentle, musical qualities. When The Band play “The Night They Drove Old Dixie Down” the lens seems subtly driven by Helm’s hammering rhythm. For all its length, Hudson and Manuel barely figure into The Last Waltz—Manuel only sings lead on two songs, “The Shape I’m In” and “I Shall Be Released,” and during the latter he is obscured by clusters of guest singers straining ambitiously toward their microphones. Scorsese only briefly focuses on Hudson, but it’s to draw attention to his strange, ribbony organ tone, which gives even The Band’s most straightforward Americana an alien aspect. Throughout The Last Waltz, I am most captivated by Helm, however, and the fierce but reserved intelligence that radiates from his playing and his speech.

When Levon Helm died in April 2012 I was in New Orleans, enduring an unrelated nervous breakdown. I had fallen for someone who was dating someone else. She didn’t tell me. I figured it out gradually through social media. In this way I had accumulated enough anxiety that it began to bloom electrically through my body. I spent a lot of time trying to will myself to sleep on the couch of my parents’ condo. I couldn’t sleep. Small bonfires flowered from the branches of my nerves. The night Levon died I lifted myself from the couch at 2 a.m. and queued up The Last Waltz performance of “The Night They Drove Old Dixie Down” on YouTube. I watched it ten times in a row. Playing the same song and the same scene over and over created a kind of rhythmic and visual continuum, a version of The Last Waltz where The Band only play this sad, swelling song about the defeated Confederacy. Levon totally inhabits it, the perspective of diminished white Southerner Virgil Kane forming almost entirely from the grain in his voice. I didn’t feel any better; instead, the sadness I felt for Levon—along with the more general sadness—acquired new dimension, expanding until it began to feel depthless. Two nights later I hovered outside the blues tent at the New Orleans Jazz and Heritage Festival. Mavis Staples was singing. “This is for Levon,” she said, and her band gently eased into “The Weight,” which she sings with The Band and her family in The Last Waltz. It’s one of the performances Scorsese filmed on a soundstage after the actual concert; The Band and the Staples are surrounded by a constellation of lights which softly bruise the emptiness around them.

For all its excess and its drifting focus, The Last Waltz is a success in that it complexly expresses the mosaic yet seemingly effortless sound produced by the merging personalities and sensibilities within The Band, just as the seamless blend of blues and country inadvertently generates rock and roll. Robertson is a hideous, clownish avatar for them, but this translates to his guitar as a vast emotional efficacy; his solos open up the songs considerably. When they perform “Caravan” with Van Morrison, they lock into their sound immediately, a kind of easeful swing. Morrison stomps around in some kind of glittering maroon suit, barking out phrases in a sinuous wail. Toward the song’s end, the camera pans across The Band and the audience, the first and only time this happens in the film. The crowd appears gently absorbed by the music. Morrison yells, “Just one more time!” and throws his arms up rapturously, as The Band and their horn section move through the final constellation of notes in the song. “Just one more time!” An enormous smile forms atomically across Helm’s face, and for once it mirrors Robertson’s permanent, self-impressed one. What’s happening on the stage is significant, unrepeatable, immediate on its surface yet containing an enormous depth of feeling.

“Just one more time!” Morrison drops the mic and disappears.