The Things That Spell San Francisco To Me Are Disappearing Fast

Sonya Redi
Must be something in the water. Something about how the ocean gently curls itself into the peninsula, as if nervously awaiting permission to hold its hand. Or perhaps it’s the way the fog rolls in, as if pushed directly from perpetually foreign Japan. Yes, that must be it: the fresh, yet freezing fog which clouds the brain. San Francisco has always been a city which provokes obsession; even if the epicenter of cultural movements lies elsewhere in the world, when San Francisco gets involved they evolve into full on tsunamis which transform the city and its inhabitants overnight.

Our current tsunami started in Silicon Valley and, in the past few years, has overtaken the Bay Area so thoroughly that all you’ll find left in its wake are plaid shirts, beards, and conversations about start ups and vegan tacos. All original tenants gone, evicted. Spend a minute in San Francisco and you’ll understand the reason behind all this obsessive behavior. Squeezed between forests and salt water, balanced precariously atop 41 hills, the city has insanity brewed into its blood. How it aches for it. So much so it can’t help but lure people here, only to softly nudge them over the edge.

But I want to go back. Scratch that, I need to go back. To a time before the city’s obsession was Earl Gray ice cream, so Instagrammable one must wait in line at least an hour for a scoop. Back to the way I remember San Francisco being when I was younger. And maybe further back still, to the San Francisco I never experienced but felt that I did, thanks to Mr. Stewart’s driving skills and Ms. Novak’s hours of meandering. In his film, Sans Soleil, Chris Marker famously said that Hitchcock’s Vertigo was “the only film capable of capturing impossible memory.” Well, I would like to capture a few of these impossible memories for myself. Stalk the film’s locations to see what has been altered and what hasn’t. See first-hand if there is any trace left of the San Francisco I fell madly in love with, or if it was all just an illusion from the beginning; a cinematic trick, courtesy of Mr. Hitchcock. So let’s speed down a hill and fall into San Francisco Bay. Are you ready for a drive? (I) watched her come out of the apartment, someone I didn’t know.

It is here, at the Brocklebank Apartments where Scottie begins trailing Madeline, that we must begin our journey. I am oddly overjoyed to find that the building is just as stylish as it was in 1958. If it weren’t for the black Escalades parked nearby, I would swear the film just wrapped a few months ago. Right next to it, you can see—over there—the perennially luxurious Fairmont Hotel. I wander through the gold lobby of the hotel, pretending to be a rich person that belongs rather than a young person hungry for a past, and I find a framed poster of the film. For a second I stare, much like Madeline stared, at the Carlotta painting at the Legion of Honor, strangely captivated. I leave this neighborhood feeling relaxed, the same sensation I feel when I leave my great grandparents’ house, even though this is a part of San Francisco I have never belonged to and most likely never will. It comforts my eyes to see that some things never change. This is the area that has remade itself the most since Hitchcock’s time. Though it is still home to the city’s most notorious drinking holes, the vibe has flipped, with most bars now having the respectable feel of being frequented by young and successful engineers; the old saloon dives that Scottie might have visited have all but been pushed out. Meanwhile, what was once respectably quiet about it—the city’s oldest building and church—now serves as legal guardian to the reckless and drunken Dolores Park, where only rich children in their early thirties play anymore. On most afternoons and weekends the park feels like a music festival without any music, save for the occasional man with a mustache ironically playing the fiddle. Picnic blankets, empty beer cans, and hula hoops crowd the scene just a few feet from where the graves of the first San Franciscans lie. (I can’t help but laugh thinking that maybe they are enjoying the never-ending party.) Across the way from the Mission Dolores, there’s a red-carpet waiting line for a popular ice cream shop. In case the ghosts are hungry, obviously.

See, I told you I wasn’t kidding about the long wait. And you live here alone? One shouldn’t live alone.

Luckily for Madeline, I suppose, nearly no one can afford to live alone in San Francisco anymore. Still I can’t help but wonder who the fortunate people are that occupy John’s apartment. While in the film it looks like a rather humble setup— something appropriate for a retired, semi-successful detective—today the place has added a new outdoor fence (to deter Vertigo fanatics such as myself I’m sure) as well as some nice trees. No matter how much it tries to hide, though, on any given day one still finds tourists of all ages walking past its door. Not only because of the film, but because the apartment sits just below Lombard Street, one of San Francisco’s most famous landmarks.

I am filled with dangerous envy standing outside. The view, which was once considered commonplace and attainable for average San Franciscans working normal jobs, is completely out of reach, most likely bought out by someone that lives with curtains drawn. In some strange way, though, I guess that’s probably how John would live there now, after everything he’s been through. The thought eases my gentrification rage. Being a native to this city, my gentrification rages strike often and unexpectedly these days, much like a migraine. I apologize. 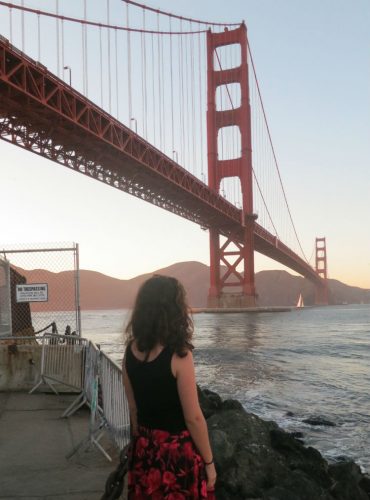 And what were you doing there, at Old Fort Point?

Much like Madeline, I wander about. It is so beautiful here, especially at sunset. When one gets away from the city and its chaos, it’s easy to fall in love with it all over again. Especially at this time of day, when everything becomes soft and pink. The ocean an indescribable shade of dark blue, white sailboats floating past, reminding me of how peaceful living by a bay can be. A tour bus stops briefly, but the tourists only stay for a few seconds before the quiet, imposing stillness of the bridge returns. A fence has been built that prevents me from getting at the exact spot where Kim Novak’s fall marked cinema forever, but I find myself glad for this; I am unsure how I would react standing where she stood. It’s a scene that shocks me every time I see it, even though I’ve seen it a dozen times. It feels both overwhelming and surreal to be here, even though it’s by far the most real place I have encountered in San Francisco today. The waves run into rocks, and I struggle to move back to the car. It doesn’t take much to see why Madeline would let go here. It’s a very tempting place to let one’s self fall. One is a wanderer, two are always going somewhere.

Wandering through the city is difficult nowadays. It seems that everyone and their poodle has a car and is constantly out and about—not wandering, but commuting. To and from work. To and from lunch. To and from the bar. On their phones. Taking pictures of themselves not wandering. Being guided by Siri-voiced maps through the city, at a speed that makes it impossible to see all the wonders flying past. To be fair, I am guilty of this myself. As much fun as it was to drive through the city, my experience was vastly different from Jimmy Stewart’s. Parking was not nearby, and I was anything but slow and calm. That being said, I—like John, after following a tour of what turned out to be only lies—couldn’t help but get caught up in the dizzying, roller coaster maze of it all. By the end, I had fallen hopelessly in love again. In love with the city’s undeniable beauty and it’s complex and fickle self. Even though it was only an elaborate rouse, I enjoyed playing along. Because while San Francisco may change, the things that matter most to her, and to me, never do. And while we may not get the chance to wander as freely and elegantly as Jimmy and Kim, we still wander everyday, in their shadows, the ghosts of their impossible memories haunting nearly every spot in this old town.

It’s enough to drive all of us mad. Or at least more than we already are.