Is This Something, or Is This Just Right Now? 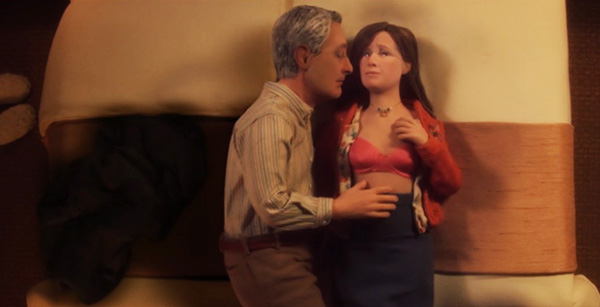 This is real sex. And that’s because the people having it aren’t real.

They’re two silicone strangers named Michael and Lisa, though she’d rather combine her name with that word she loves, anomaly, that word that means something is different from all the rest, special, thrilling. They’re puppets who were birthed by a 3D printer, and just for tonight, they’re tumbling into a miniature hotel room encounter that’s been meticulously orchestrated by a man named Charlie who, nine years ago, directed a film about a man who meticulously orchestrated encounters. These two strangers move like they’re underwater, like they’re in a dream, like they’re in your own memory of that night when, for a few long, short minutes, the rest of the world was gone and everything seemed possible. Those moments felt so real. And so this sex is real.

These are two people who want something, but don’t know how to want it, and probably can’t quite articulate what it is they want, anyway. They want to connect—maybe with each other, or maybe just with the idea of connection. They want to be vulnerable, to push this moment forward, but they don’t know the steps, so they lie still, and he moves his hand across her body, knowing that he has to be careful, that if he moves that hand the wrong way, this might be over. But he knows, too, that if he stays still, this moment will drift by like all the other empty ones. So he makes small moves, taking his time, taking long pauses, giving her the space to stop him.

She doesn’t stop him. She doesn’t tell him to go ahead. She just talks, because she isn’t sure if she wants him to stop moving, if she wants to leave, if she wants him to keep moving, if she wants to take this leap for the first time in so long, open the door to pain again, shame again, and she knows that as long as she keeps hopping from word to word, she can keep this moment spinning, keep from having to decide one way or the other, so she relates coffee orders, and she relates CD choices, and words tumble out like a flooding river. Something is happening, something she can’t decide whether or not to control, so she uses words as a treadmill, keeping her in motion, keeping her in place.

And all the while, he’s looking at her, which he thinks is the same as seeing her. He’s watching her mouth as she gives herself shape for him, and he’s awed, because he can take these small roots of a person and he can grow them into everything he’s ever wanted someone to be. It doesn’t matter how much about her he doesn’t know he doesn’t know. This is enough. This is perfect.

So he makes the first big move, shifting his weight up onto his hip to see her from above, taking that first big risk, moving from a maybe I will to a yes, I’m going to, that moment of action that will either end tonight, or truly begin it. And he might not even notice that now he’s looming above this prone woman. It all seems so sexy to him. To him, this is a romance movie. But it isn’t.

It’s a series of tiny dioramas, thousands of them, the movement of the puppets mapped out with painstaking detail by a man who 13 years ago wrote a film about a man tumbling into his own remembered regrets, obsessing over and reshaping lost nights. It took four months to create this moment, to choreograph their movements, to create the illusion of their weight on the mattress. It was carefully adjusted and captured and adjusted again thousands of times in search of a true feeling, all by a man who 15 years ago wrote a film in which he and other real people did and said things they never really did or said, because in the unreality, there was truth. This manufactured moment took more thought than any real moment ever has. It takes work to remember what it feels like to fall off that high ledge and into a moment, tumbling and hurtling and hoping for the best. It takes so much thought to design thoughtless desire.

We can recognize that when they finally start to undo buttons, to open each other up, the sounds they make aren’t quite pleasure, but more like relief. Something that was pent up is being set loose. Some pain is being soothed, some wound being salved. Maybe everything really will be OK. Maybe this is something. And even if this is just right now, right now can be something. The pressure is being eased. It’s pleasure, it’s joy, but more than anything, it’s relief.

And it’s fun, too, but it’s weird. It’s embarrassing, the way these strange and unruly limbs tangle, refusing to be what we expect, refusing to be enchanted tools created for a the sole purpose of giving and receiving transcendent pleasure. That’s what movies have always shown us: bodies that move with such purpose and such confidence that they seem controlled by an omniscient force. These bodies were controlled by an omniscient force, their foreplay manipulated for months by a man who 18 years ago wrote a film about a forlorn puppeteer who found a way to forcibly control the body of a real movie star. He’s used his omniscience to ensure that these small, unreal bodies stay real; pockmarked like yours, saggy like mine. These are not what movies have told us bodies should be. He’s made sure of that.

Movies have told us that sex is very serious business, that it’s sacred, mystical. But sex is ridiculous, too. Sex takes trust, and that makes it serious, the trust that comes in making this absurd offer of yourself to someone, in uncovering what’s always so meticulously covered, in allowing yourself to become naked, and then bump your head on the headboard, and laugh about it together, because now that’s part of the story, and it always will be.

This is real life, and that’s awful, because what these strangers are doing is timid, uncomfortable, and sometimes, just a little bit, what they’re doing is sad. So thank goodness they’re silicone. You couldn’t ask this of real people. You couldn’t ask living actors to do this to each other, to expose themselves for each other, to expose each other for our enjoyment. These unreal people can’t know that we’re watching. They don’t have to second-guess their micromovements, knowing they’re being assessed by eyes in the dark, eyes that absorb their nakedness and the things they ask each other to do, let each other do, and then ask each other not to do, please, because they’re shy about that. They’re in the moment for us, because this is not a real moment, and that’s what makes it real life

This is not sexy, but isn’t that unsexiness just a bit sexy? How many of us would truly want to see a sex tape of ourselves, be forced to analyze our own fumbling gracelessness? We know how unsexy we looked. But we know how sexy we felt. It’s a secret between us and these puppets. Don’t worry. You look ridiculous, but so do I. I’ve been you right now. And it was sexy. Because it was me.

And when they do join together, when they melt into each other, when the moment is at last, truly lost to the wanting of it, when they finally stop thinking, when their brains go numb and they become mammals driven by need and they move because they’ve forgotten how not to move—it’s over. Your stomach churns and then your heart breaks because it’s finished before anyone’s been able to appreciate that it’s begun.

That was really nice, she says.

I don’t want to lose you, he says.

I lose everyone, he says.

That was the little death. Quickning our faint heats in a soft embrace, John Webster once wrote, and kindling divine flames in fervent prayers, we may both go out together.

This is the post-coital tristesse. The world is a beautiful place to be born into, Lawrence Ferlinghetti once wrote. If you don’t mind a touch of hell now and then just when everything is fine.

They look out the window, two strangers who’ve seen the most innermost parts of each other. They remember the rest of the world is there, even though it disappeared for a while.

Their eyes get heavy and they drift off.