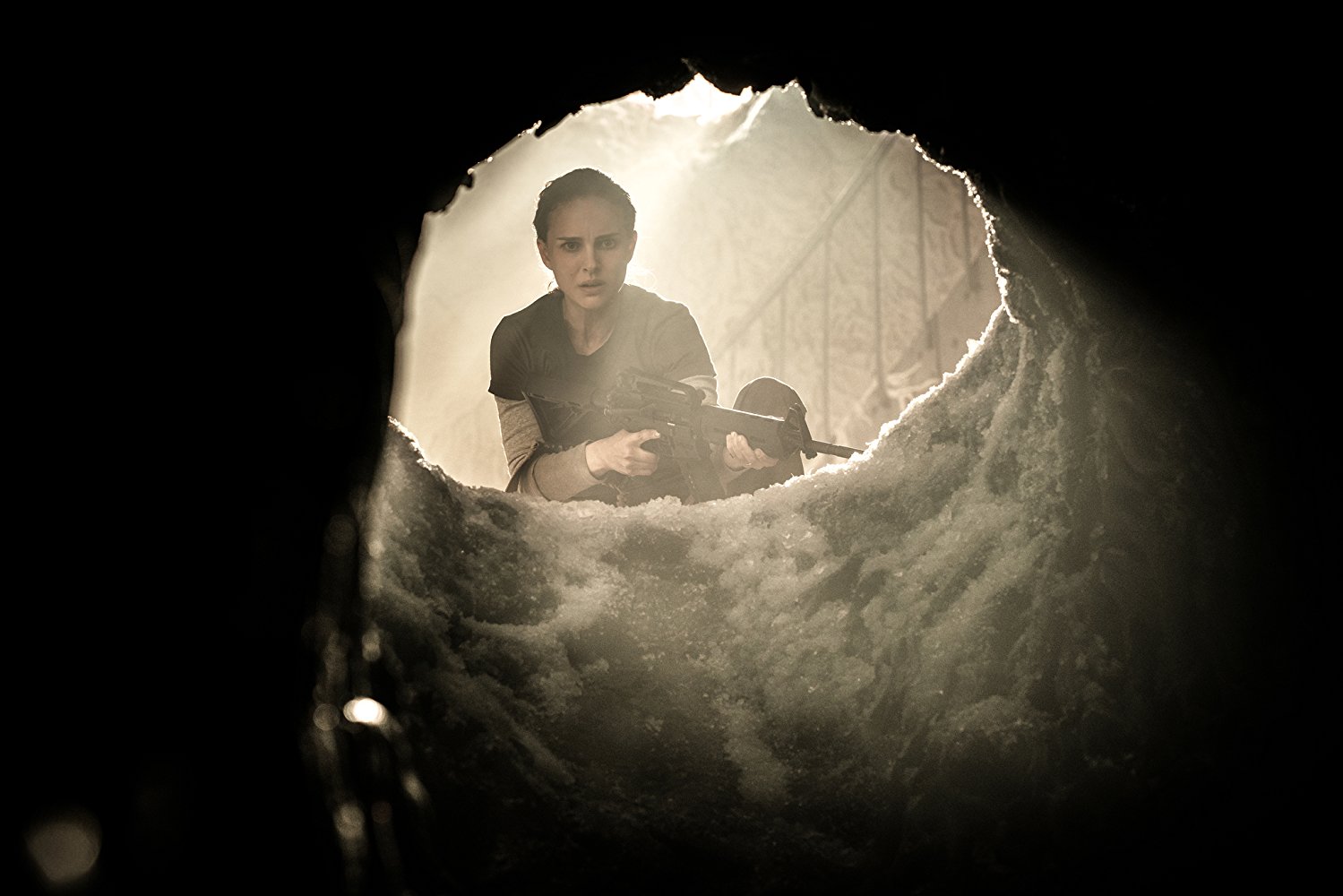 Annihilation and the Art of Self Destruction

Chicago winters are an animal. We hide from them, burrow into ourselves; retreat from fanged winds, from clawing cold. Any Chicagoan knows: there are two of us in one body, the summer person and the winter person.

The winter comes like a sneeze and stays like a yawn. It roots up into everything. Pipes freeze, snow falls, windows vein with condensation. Some of us can get through it alright, but the rest of us are prey, susceptible to the icy echo chamber, indebted to the excuses it provides: A reason not to leave, an alibi for mortal withdrawal.

In Alex Garland’s Annihilation, a mutilated bear stalks a team of female scientists in the night. Its roar is not a traditional bear sound but the scream of a woman. There is nothing so haunting as this primal, phantasmic bellow. Human, but not quite; a maligned interpretation of something once alive. The other women recognize the scream. She was one of their own, a scientist on a mission, looking for something just like them. Now she is a sonic fossil, a specter of what they might become in this mysterious place they’ve willingly entered.

It is hard to watch Annihilation in a Chicago winter and not feel it on a molecular level. It’s not the setting; the film takes place in a stretch of Southern swampland manipulated by some unknown force. The area, called the Shimmer, is lush, almost tropical. Degrees of separation from the bone-cold Midwest. But the Shimmer permeates with the same modus operandi. Its iridescent bubble is a prism, but it doesn’t just reflect light—it reflects everything. It is a disordered place, and it disorders those who enter it. Their sanity flees, their bodies mutilate.

We live in this cold willingly, knowing what it will do to us.

In Annihilation, Natalie Portman plays Lena, a biologist and former Army soldier. Her husband Kane (Oscar Isaac), an Army Special Forces officer, embarks on a top-secret mission to the Shimmer, unbeknownst to his wife. He’s gone for more than a year, and Lena is beside herself with grief; she paints their bedroom, she turns down plans with a colleague. But her grief is more layered than just missing her husband. We learn later that things weren’t perfect at home. She was sleeping with someone else, and Kane knew it. In his absence, she fills the space they shared with the attentive love she couldn’t when he was actually around. It is so much easier to love a ghost.

Soon, soon the flesh
The grave cave ate will be
At home on me

And I a smiling woman.
I am only thirty.
And like the cat I have nine times to die.

This is Number Three.
What a trash
To annihilate each decade.

But then Kane returns, unexpectedly, in the doorway of their bedroom. Except he is not really Kane. He is some lobotomized version—the same flesh and bone package, but empty inside. He doesn’t remember where he was or how he got home. He quickly starts to shut down, blood seeping from his mouth, his organs failing. As if Lena’s presence causes his own annihilation.

I am an addict. This is something I know. But there is no singular vice, no easy thing to remove or address. Every turn of the tide brings on new obsessive methods of mischief: I starve myself, I stain my guts with wine, I stay awake three nights in a row. I torture my body, not willingly, but because there is something broken inside of me, some loose nerve that sparks and faults. I am not content to merely live; I have to live with danger.

What a trash
To annihilate each decade.

Lena is a character I know because she is a character I am. Our afflictions are different, but our nature is the same. For Lena, there is no outward sign that her marriage is problematic. She laughs with Kane in bed, their jokes and chemistry easy and natural. But contentedness is not enough. There’s no high in happy. She scorches the good so she can revel in the bad.

That is me, too. A girl with plenty of gifts: health and family, a skin color that affords me inherent safety, a good sense of humor, a sharp self-awareness. So much to be thankful for. And so much to destroy.

Lena enters the Shimmer with a team of four other female scientists. Her husband is in critical condition, and she has been alerted to this place where he was, an effervescent pocket that appeared out of nowhere one day, a mysterious area the government cannot seem to properly infiltrate or explore—and that, apart from Kane, no one has come out of alive. These women will go in and attempt to come back out with data, samples, anything that might name the Shimmer’s origin.

Or, at least, that is the on-paper reason for their entry. But in truth they are just like me and Lena, “damaged goods” as Cass Sheppard (Tuva Novotny), a geologist and mother grieving the death of her young daughter, explains. There is also Josie Radek (Tessa Thompson), a physicist with a depressive streak; Anya Thorensen (Gina Rodriguez), a paramedic and recovering addict; and Dr. Ventress (Jennifer Jason Leigh), a psychologist with terminal cancer. They all prepare for this potential suicide mission because they are all on the brink of destruction anyway. The Shimmer may kill them, but it might also be a vessel towards some higher recognizance.

And as any woman with a danger streak can tell you: we are always seeking asylum.

I have decided recently that I will leave the punishing Chicago cold and head for warmer land. I can no longer exist in the marshes of self-despair. Every winter, I let the hooks of depression, of my own annihilation, take over. I gloat in winter’s macabre propositions: eat too much, drink too much, sleep too much and not enough. And because I am single and live alone, there is a powder-keg probability; I could go off at any time. It’s too risky a thing, this fear of what’s next, of my own capacity.

Lena finds her answers in the Shimmer. The other women die, some lost to their afflictions—Cass becomes the bear’s chilling scream, Anya is mauled by the same creature—and some absolved; Ventress finds the extraterrestrial source of the Shimmer and is entwined with it, and Josie disappears into nature, in a scene that is either a  suicide or a beautiful, perfect immersion.

But Lena is truly exalted. She learns that Kane died in the Shimmer, and that his copy was released back into the world, not the real Kane but also… kind of the real Kane. Lena comes face-to-face with her own spiritual double, in a scene that’s hard to sensibly translate. The Shimmer infects her and attempts to replicate her, but she wards it off and escapes. Still, she is changed. And like Lady Lazarus, she reforms.

Out of the ash
I rise with my red hair
And I eat men like air.

I can’t say with any positivity that I will rise from the ash, but I am not fully burned yet; scorched, sure, but not detrimentally.

Lena’s release back into the world—with new foresight and acceptance—gives Annihilation its happy ending. The Shimmer is destroyed, its purpose served. Kane may not be Kane as he was birthed and raised, but he is a new iteration of the same person, and Lena loves him anyway. They embrace at the end, both sets of eyes gleaming with the same ghostly, oily hue of the Shimmer; transformation, recognition, completion.

I look forward to uniting the two halves of me in some summery, happier plane, so that I might feel it too—the reassurance that destruction, like anything else, can be temporary.