Where Did You Learn to Dance? 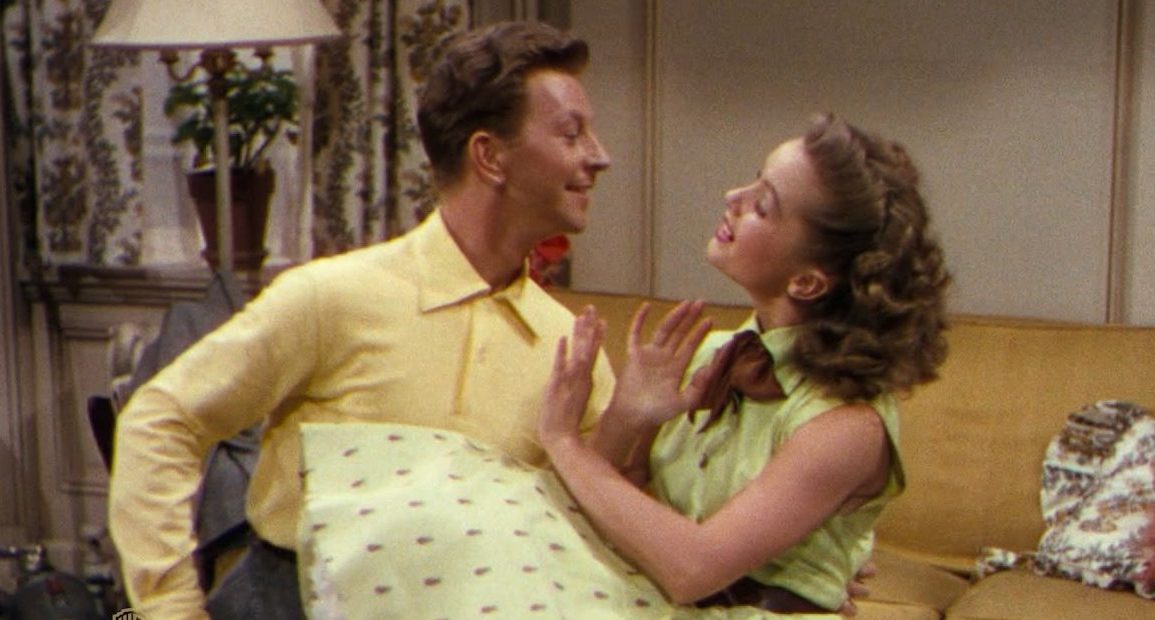 A 1950s MGM Technicolor musical. A goofy Donald O’Connor. An effervescent Debbie Reynolds. A dancing Gene Kelly. A dream ballet about movie stardom. Few would fail to recognize these descriptors of the now iconic Singin’ in the Rain (1952). Yet these fragmentary references also describe another film, one that is, regrettably, often overlooked and underseen. Released 65 years ago this month, just a year after Singin’ in the Rain, I Love Melvin was clearly meant to capitalize on the success of another O’Connor/Reynolds pairing.

Reynolds plays Judy LeRoy (née Schneider), a young New York City-based chorus girl with dreams of Hollywood stardom, even though she’s currently appearing as a dancing football on Broadway. O’Connor plays Melvin Hoover, an assistant to a photographer at Look magazine, who, after falling in love with Judy, exaggerates his ability to get her featured in its pages. Under the pretext of various photo shoots—some shot on location in Manhattan—Melvin pulls Judy away from her family-approved paramour, a handsome square played by Richard Anderson. Like most MGM musicals from this period, I Love Melvin delivers a happy ending for Judy and Melvin, both romantically and professionally.

As someone raised on a steady diet of classical Hollywood musicals—a diet that ultimately became the meat of both my undergraduate and graduate research—I Love Melvin is an enigmatic object. While I would not call it a musical masterpiece, its layered richness makes it extremely gratifying to unpack, especially in terms of its self-referential nature. Much has been written on the American musical and self-reflexivity, with film scholar Jane Feuer arguing that all Hollywood musicals, often about show business and the act of producing entertainment, are “self-referential in [a] loose sense,” but some “have exhibited a greater degree of self-consciousness than others.” I Love Melvin, with its proximity to the celebrated Singin’ in the Rain, is an interesting case: It exhibits both the “standard” self-referentiality that we have come to expect from Hollywood musicals and something a little more bizarre.

The film, directed by Don Weis, is playfully self-aware right from the start. Reynolds, clad in a tutu, approaches a dressing room mirror to apply lipstick. Eyeing the camera, and by extension the audience, she cheerfully takes her lipstick, mimes writing the title of the film on the mirror, and walks away. After the ensuing opening credits, a soundstage full of film equipment appears onscreen as a large film crew prepares to shoot a musical number. Reynolds—as “Miss LeRoy”—performs “Lady Loves” alongside a group of men in top hats and tails. Soon after the number ends, it is revealed that this whole scene has been Judy’s dream. Yet in these opening moments I Love Melvin, to borrow a phrase from Feuer, “[demystifies] the production of entertainment,” giving us both a glimpse of the star Debbie Reynolds and a behind-the-scenes look at how musical entertainment is created.

These moments of demystification often produce a thrill; there’s something electrifying about seeing that communal creative process in action (however fake it is). However, as Feuer rightly points out, Hollywood musicals would not be successful commercial products of utopian idealism if they did not “remythicize” the production process that manufactures them. In I Love Melvin this happens minutes after the opening sequence, when Judy, walking in Central Park, begins to sing about finding true love. The camera cranes up to reveal that Melvin is singing and dancing nearby. The same equipment and crew seen before the previous number are no longer exposed as the film attempts to create an illusion of spontaneous musical expression.

Where I Love Melvin gets a little more bizarre, in terms of its self-awareness, is during a short dream ballet later in the film. After Melvin unwisely promises Judy that he will put her on the cover of Look, she begins to imagine her imminent fame in Hollywood. Moving into a highly stylized dream world, we see a now famous Judy in wardrobe getting ready, while a male voice off-screen pages “Miss Judy LeRoy, Mr. Gene Kelly, Mr. Fred Astaire” to the set. What follows is a surreal and strange number wherein six men—three wearing Fred Astaire masks and three wearing Gene Kelly masks—dance alongside Reynolds’ character. Each set of male dancers is dressed in a way that signals their persona: the Astaires are elegant in top hats and tails, while the Kellys are jazzier, clad in tight white T-shirts and An American in Paris-style berets and handkerchiefs. There’s something very creepy about the masks—their fakeness is too apparent. Given that the trailer for the film announces that “the Singin’ in the Rain kids are singin’ again,” it’s strange to think about this scene’s relationship to Kelly. While the film as a whole embraces a world where Kelly and Singin’ in the Rain exist, this sequence has to deny that same status to “Debbie Reynolds” (and by extension “Donald O’Connor”) to prove that her character Judy is a successful musical star.

Incidentally, this scene also perpetuates a certain way of thinking about the figure of the Hollywood song-and-dance man. As influential dancer-choreographers with distinct styles and tremendous control behind the scenes, Kelly and Astaire were not only the most popular and well known male dancers in mid-century Hollywood, but have, since then, become synonymous with the dance-heavy musicals of the 1930s through the mid-1950s. In the last few decades, they have become the go-to subjects for larger theoretical discussions of the musical’s structural, aesthetic, ideological, and technological debates, and their films are the ones that continue to get screened and studied the most. In attributing musical success to dancing with a Kelly or an Astaire, I Love Melvin not only reiterates Kelly and Astaire’s importance at the time of the film’s release, but also preserves that status for later audiences. This, unfortunately, leaves little room for other contenders, other men whose unique choreographic style is worth celebrating, then and now.

This is not to say that someone like O’Connor was unknown. Born into a family of vaudevillians, O’Conner started performing on stage at a very early age. After making his film debut in 1937, he appeared in several musicals for Universal during the 1940s, and starred in the highly successful Francis (the talking mule) franchise. That his role as Kelly’s sidekick in Singin’ in the Rain remains his most famous screen appearance is not necessarily a bad thing—his physical skill in that film, from the acrobatic “Make ‘Em Laugh” to the tap-heavy duet “Moses Supposes,” is breathtaking. Yet, Singin’ in the Rain will always remain Kelly’s film and it’s unfortunate that we often tend to forget that O’Connor was a leading man and accomplished dancer in his own right.

I Love Melvin includes plenty of numbers that showcase O’Connor’s unique physicality and style, not to mention his typical high-waisted slacks and wide-eyed grin. O’Connor and Reynolds make for a breezy and charismatic duo in the early “Where Did You Learn to Dance?” sequence. They dance around Judy’s living room and O’Connor, with his tall skinny frame, exhibits his signature playful looseness and lightness on his feet. He’s an upright dancer, who—at his best—utilizes his plastic face and acrobatic skill to create a sense of goofy effortlessness.

This is especially true when O’Connor dances on roller skates later in the film, following Judy’s kid sister’s attempt to console a depressed Melvin in Central Park. In the dance proper, O’Connor glides and taps in the gazebo where they sit, even swinging around the gazebo’s columns, using pivoting lamps to propel him. The entire number is impressive, and coming between Astaire’s 1937 and Kelly’s 1955 forays on roller skates, forms a unique subgenre of Hollywood song-and-dance sequences. What’s different here is how the choreography reads as on the verge of the acrobatic, slapstick style typical of O’Connor. (And the fact that this is a duet with a young child reinforces O’Connor’s boyish persona.) At times, it seems like he’s on the edge of everything, moving too fast and about to fall—this is not the case when he is actually tap dancing, which is a moment of visible control—and the number ends with him crashing through the siding into a bush. Of course, these stumbles are all part of the choreography, but they are a crucial part of O’Connor’s particular brand of loose physicality.

O’Connor’s bigger solo dance number comes a little later, when Melvin is tasked with cleaning up the studio after a photoshoot. Fully in love with Judy at this point, he has plastered photos of her all over the Look office in the hopes that she will get on the cover. (She doesn’t, the executives opt for a horse instead.) In the studio, O’Connor performs “I Wanna Wander,” a whirlwind dance tour around the room that utilizes different backdrops, props, and costumes to create a spontaneous-seeming exercise in make believe. Most of this pretending is silly, but some moments do reflect racist mid-century American values, with O’Connor donning Asian and African styled costumes as part of the dance. Although not as acrobatic as “Make ‘Em Laugh,” this number is evidently meant to show off his slapstick chops, and this is especially evident in a pratfall-filled sequence where O’Conner—with the help of editing—alternates between five different characters involved in a murder. It’s a delightful comedy-routine-within-a-musical-number, geared toward O’Connor’s strengths as a performer.

Despite a slim surrounding narrative, watching O’Connor dance is the main reason to see this film. (While I haven’t focused on Reynolds, her dance as a football is a must-see too). I Love Melvin effectively serves as a reminder that there were talented male dancers, in addition to Kelly and Astaire, who worked in the musical genre. Why aren’t we talking about O’Connor more? His drunken balloon dance in Call Me Madam (1953) or his dance with rubber balls in Anything Goes (1956)—both available on YouTube, along with countless others—are simply more evidence of his physical skill. For that matter, why aren’t we talking about Bobby Van or Dan Dailey? And why, oh, why aren’t we talking about Fayard and Harold Nicholas? Their tour-de-force tap routines are a vibrant testament to the awesome physical capabilities of the human body.

Of course, it’s not as simple as just inserting a new film like this one into the Hollywood musical lexicon. Growing up, I responded to the genre instinctively—the everyday world was a stage and, when words failed, heightened bodily expression was the only way to communicate your emotions. Now, as an adult, I’m aware of the problematic nature of musicals like Singin’ in the Rain or I Love Melvin, with their narrow worlds that marginalize everything but white musical expression. While Kelly could dance on street corners and O’Connor in gazebos, African-American dancers like Fayard and Harold Nicholas were either entirely absent or were  confined to the specialty act, an extractable cameo that usually occurred in a theatrical setting for a diegetic audience. I have complicated feelings about all this, wanting to celebrate smaller films like I Love Melvin, while being keenly aware that I’m still championing an MGM film that privileges a white male performer.

While I don’t have any easy answers, I do know that I Love Melvin is an exuberant portrait of some of these very questions of recognition and visibility. Living in the shadow of Singin’ in the Rain, it seems fitting that it’s really a story about the pull of fame, Hollywood, and media success for those who have not yet made it. We’re all trying to get somewhere, I Love Melvin maintains, but there’s joy to be found—by both characters and viewers— in the way these desires, frustrations, and inspirations manifest themselves musically.