The Children of Disney & Coca-Cola 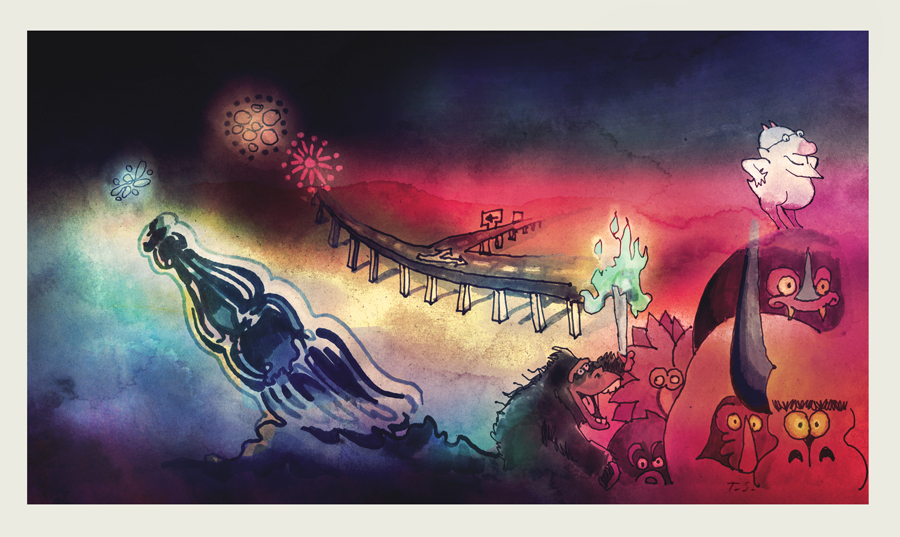 I’ve always enjoyed the sound of soda more than the taste of it. The sharp crack of the tab, the seething hiss of the carbonation inside the can. Sometimes I’ll pour it into a wide-mouth glass just so I can lean my face down towards it, letting the bubbles fizz and pop on my cheek as the crackling liquid brushes and taps on my eardrums. The sound of carbonation entrances me because it sounds like a living thing, like that foam has the potential to bring something new into the world.

I wonder if Bruno Bozzetto feels something similar whenever he cracks open a Coke. An Italian animator whose subversive subject matter and primitive style turned heads when he put out his first feature West and Soda in 1965, Bozzetto based an entire sequence in his 1976 masterpiece Allegro Non Troppo—a gleefully dark take on the format of Disney’s Fantasia—around a discarded glass bottle of Coke.

During one of the film’s live action sequences, the cruel Orchestra Master (Néstor Garay) ends his lunch break by hurling a soda bottle over his shoulder. Instead of hearing the glass bottle shatter in the dark auditorium, Bozzetto has the Coke land in an animated wasteland. Tossed from a departing spaceship, the Coke bottle still houses a little bit of black liquid. Growing an array of eyes, the liquid roils and shifts and eventually climbs its way out of the bottle. That primordial carbonated ooze crawls across the earth, quickly evolving into a set of different beasts that immediately begin either eating each other or fleeing so they can evolve into different creatures. From this little pool of carbonated space-trash emerges an entire planetary ecosystem, a dynamic food chain forged link by link from the snap-crackle-pop of soda bubbles.

Set to Ravel’s “Boléro,” Allegro’s soda scene is a playfully brutal parody of Fantasia’s “The Rite of Spring” sequence. Whereas that film’s Stravinsky episode depicted the prehistory of the world with majesty and gravitas, Bozzetto’s version of evolution is a death march. It’s a story of food chasing food: evolution as a series of evasive maneuvers for fish-amphibian hybrids, reptiles, birds, and dinosaurs trying to wriggle out of hungry mouths and grasping claws. The most effective predator turns out to be an apeman, who delights in clubbing and devouring dinosaurs as it sneaks its way to the front of the line of marching beasts.

It’s that bracing misanthropy that makes Allegro Non Troppo such a unique film. Bozzetto makes no attempt to hide Disney’s influence, starting with a hilarious lampshade: sitting in a dilapidated, empty theatre, the Presenter (Maurizio Micheli) is waxing lyrical to the camera about how revolutionary and groundbreaking this film is going to be until he gets cut off by an angry phone call from a “company in California.” Protesting that he’s never heard of a “Grisney,” Micheli insists that Allegro Non Troppo’s mixing of music and animation has never been done before.

In a way, he isn’t wrong: While the House of Mouse was the first to mix the high art of classical music with the low one of animation, Bozzetto’s cynical outlook and dark comedy made it feel like he had found a way to reinvent the Fantasia wheel. The title of the film itself is a hat tip to the movie’s approach. It refers both to the musical instruction “allegro ma non troppo” (which means to play “fast, but not overly so”) and to allegro’s more common meaning in Italian (“joyful”). So Allegro Non Troppo can be translated as “joyful, but not too much.”

Bozzetto’s film also distinguishes itself from Fantasia in that there’s an actual plot that runs through the framing device. Bozzetto uses the conflict between the clever yet downtrodden Animator (Maurizio Nichetti) and the sadistic Orchestra Master as a throughline to make the live-action scenes compelling in their own right. Their battle of wills quickly escalates to Roadrunner and Coyote heights, giving the live-action portions of Allegro Non Troppo a manic, Looney Tunes-esque energy.

Great sight gags and physical comedy abound—like the way the Animator’s inkpot keeps sliding down his slanted draft table, or the perfect man-shaped hole The Orchestra Master leaves behind when he’s been knocked through the floor. Allegro Non Troppo is the rare live-action/animation hybrid film where the “real world” feels more cartoony and crazed than the animated one.

These segments also help reinforce the title’s message: The Animator experiences moments of triumph and joy (pitching woo to Marialuisa Giovannini’s Cleaning Girl, getting one over on the Orchestra Master, sleeping with a prostitute inside a piano), but not for long before he gets slapped back down behind his drafting table.

Reflecting on watching Fantasia as a boy, Bozzetto once said “I loved the visuals but I didn’t really care much for the live-action sequences, the stylized orchestra, all the lights. It seemed too elegant, too refined. So to do something rather shabby and wacky, the exact opposite, I thought would work.”

Shabby and wacky is an apt way to describe the opening portion of the film. Instead of an elegant symphony hall, the film takes place in an empty auditorium. The orchestra is composed entirely of old ladies, whom the Presenter herds out of cattle pens into a van to drive them to the venue. The Animator is first introduced as a hostage, kept shackled in chains.

Whereas we’re meant to take the symphonic setting seriously in Fantasia, Bozzetto gleefully makes his orchestra more run-down and pathetic as the film plays on. He also blurs the line between the animated and live-action realms: the ape in “Boléro” appears in the real world to torment the Orchestra Master; the Presenter calls an animated Igor-like assistant to bring him a finale; and in the film’s climax, Nichetti draws a happy ending for him and Giovanni by transforming them into an animated prince & princess who fly away.

The orchestra’s lunch break provides one of the most clever scenes in the movie. The Orchestra Master gets an elegant table service for his lunch, dining on roast chicken with gusto while the starving Animator and orchestra look on. At one point, Garay’s character even uses his privilege as a weapon, aiming his champagne bottle like a sniper rifle and blowing one of the old ladies off the bleachers with the popped cork.

Scheming to steal the Orchestra Master’s chicken, the Animator brings a doodle to life and sends the sketched character on a desperate (and ultimately futile) mission to get the food. The doodle is a nod to Bozzetto’s most famous creation: the pork pie hat-wearing Mr. Rossi. It’s only fitting Mr. Rossi would make a cameo appearance in Allegro Non Troppo; it’s in his early Rossi shorts that Bozzetto first displayed a knack for marrying sound with imagery. They were also commercially successful enough (both at home in Italy and abroad) to give Bozzetto the clout to make films like Allegro Non Troppo, thanks in large part to Bozzetto making language barriers a non-issue by having all the characters in his shorts speak in an incomprehensible, Peanuts-esque warble.

Bozzetto’s freewheeling and spare style in these shorts evokes the cheap Mexican studios Jay Ward used for Rocky and Bullwinkle; his use of sexuality, strange mutant creatures, and cheeky cultural commentary also puts him in league with animated filmmakers like Fantastic Planet director René Laloux or the psychedelic stylings of George Dunning’s Yellow Submarine. But his squiggly aesthetic can pack a surprising punch: his cartoons seem so goofy and playful that it makes their sudden left-turns into apocalyptic endings and ironic deaths hit so much harder.

A case in point is the primeval psychedelic landscape of “Boléro,” which plays at first like Charles Darwin writing an episode of Spy vs. Spy. Watching how these perpetually evolving creatures foil each other is a delight. By the time we get to the grim punchline at the end of the short, it’s easy to forget that it all started with an alien’s Coke bottle. Skyscrapers start shooting up out of the ground like weeds and congested highways fall on top of the marching dinosaurs. Instead of a meteor strike, modern civilization is the extinction level event that annihilates all life on earth. As the dinosaurs get crushed by the city, a giant human being looms over them. His face cracks apart like a ceramic mask as “Boléro” winds down, revealing the leering apeman who’s been tormenting the other animals this whole time.

That misanthropic view of humanity is a constant throughout much of Bozzetto’s work. Consider how he depicts the origins of violence in the short cartoon Tapum! La Storia delle Armi. A pair of identical caveman, sedate and at peace with each other, immediately turn violent when a cavewoman appears. “History did not hand on us the reason of the first fight,” the cartoon’s narrator says. “But we can deduce it: the luminous smile of a woman!” Like the two men in Norman McLaren’s 1952 short film Neighbours, who live in perfect harmony until a beautiful yellow flower pops up between their properties, Bozzetto’s cavemen are driven to horrible violence out of a hunger to possess beauty. For all our pretensions to be higher forms of life, we’re ultimately little better than wild dogs fighting over who gets to eat first.

In addition to “Boléro,” Bozzetto dips into his “Modern Civilization Is Rubbish” well with the short set to Igor Stravinsky’s “The Firebird.” Retelling the Garden of Eden story, Bozzetto twists the narrative by having the Snake eat the apple himself. Gaining the Knowledge of Good and Evil plunges the Snake into the modern world. Besieged by pornography and honking cars and violence and pollution, the Snake finds himself trapped in a business suit, slowly transforming into a man, before spitting out the apple and crawling away.

Bozzetto can also tap into genuine pathos in some of these animated shorts. The sequence scored to Jean Sibelius’ “Valse Triste” is a heartbreaker, as we watch a starving cat (hungry for both food and human affection) prowl around a bombed-out building, haunted by the ghosts of the humans that left it behind. Sometimes Bozzetto is able to achieve poignancy and dark hilarity at once, as he does in the opening cartoon for Debussy’s “Prélude à l’après-midi d’un faune” where a lecherous old satyr tries and fails to court a young faun or in the Vivaldi sequence where a bee keeps getting her flower dinner interrupted by a pair of lovers rolling around in a nearby field.

While it might be easy to dismiss Allegro Non Troppo on paper as a Fantasia imitation, to my mind it’s a more poignant and effective film than its inspiration. Fantasia drips with self-importance, fully aware of itself as An Event. Allegro Non Troppo is far more playful, willing to poke fun at both itself and the culture industry (like the exploitative relationship the Animator has with the Presenter & Orchestra Master).

And because the film isn’t attempting to be all things to all people in the way that Disney films often strive to be, it’s free to take its narratives to mischievous and darker places. It’s hard to imagine Disney greenlighting an animated scene that begins with a Coke bottle conceiving all life on the planet, or agreeing to a sequence that ends with humanity nuking itself into oblivion, but that’s exactly how Bozzetto chooses to end his animated spectacle.

It’s all right there in the title he chose. Walt Disney would have never signed off on a name like that—the man who created The Happiest Place On Earth would never tell anyone to “be joyful, but not too much.”