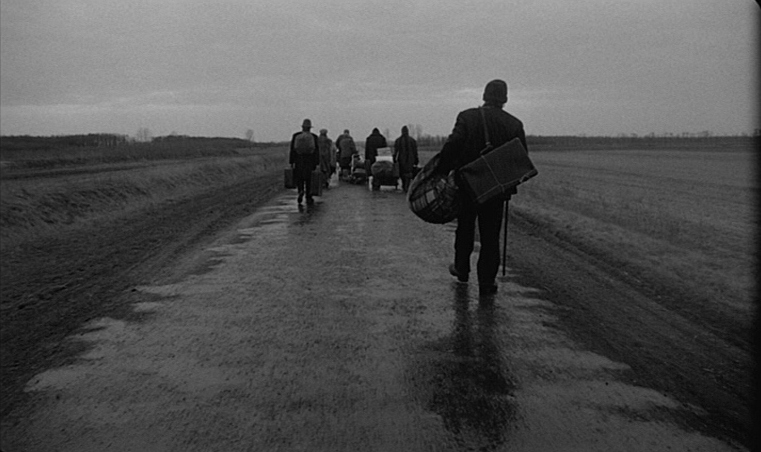 I remember cows in mud; a muzzle of rain. How the camera’s tracking shot starts and stops over and over like a stream muscling through winter, as if querying, at times, whether it is indeed water—as in: fluid. In Iowa, where I live, the stench of this scene would seep into your clothes, your hair. I almost remember specks of shit on the lens, though I know they’re not there: just the wreckage of mud the cows churn through, sometimes in circles like spokes.

I do remember that there’s rain in the opening shot; the mud is slick, but I couldn’t tell you the time of day. You need light to render rain visible, but I don’t know Tarr’s camera, the type of lens. Regarding the viscosity of another film, Elegy of a Voyage (2001), Laura Rascaroli writes, “Shot with special anamorphic lenses…the film looks as if it were framed through a veil of trickling water or as if the surface of the image were liquid.” In Elegy of a Voyage the liquid trembles on the surface of the profilmic like a teardrop. It sounds like a film (48 minutes!) I could scrub through in an instant.

But this is not an essay about Elegy of a Voyage; rather, it is an essay on memories, mere fragments, of Béla Tarr’s Sátántangó. Mind the gaps (in narrative, in precision, in fact). Hence the quandary of duration’s distance: always looking past the task at hand. I watched this film (I experienced this film) seven months ago and have not watched it since. The memory of it slips through my proverbial fingers. I have to clutch it tight like a midwife, or I might lose it altogether.

Sátántangó is a film in which not much happens. Dialogue is sparse, plot even scarcer. As a  student in a graduate program that celebrates experimental cinema, I eschewed the narrative arc. I was searching for something that slowed the sensational while simultaneously torquing the senses. Sátántangó circles around a small village, a working village, a farm village. The cast of characters is drab, slightly dour. These are people worn down to the exposed nerve of existence. We see them being, not performing, the acting understated, not spectacle.

Periodically, the vignettes, which follow one or two particular individuals, coalescence, like the scene in a wooden bar room where various characters gather to drink ad nauseum and dance to a never-ending accordion accompaniment. The frame is static, a long shot that endures past the point of patience or productivity. The drinking intensifies, the dancing deteriorates, but Tarr does not cut away. Nothing happens, but that’s the point. There is a benevolence of banality in Tarr’s duration. The camera forces you not to look away, just as these characters cannot escape their circumstances. I can almost hear, again, the boots beating broken time on the slatted floor: the brute persistence that reminds us I am still here.

It was July, or maybe June. I started it around noon so that when I left the auditorium the sky was still flush with light. In Frank O’Hara’s poem “The Muse Considered As a Demon Lover” he writes, “the / walls were panting with excitement!” The walls in my auditorium were not panting, but pensive: watermarked, waiting. The day was an event. The event of the day was watching Sátántangó. The long yawn of summer allowed for temporal indulgences. I took advantage of such an elastic approach to time.

In Catherine Pond’s short story “In the Absence of Rain” she writes,

Rain has no parameter, no geometry, no shape, no meter, no rhyme. It has no borders. It spills over into everything. Perhaps you do not like the rain; you are one who likes limits. Or maybe it’s the opposite. Maybe rain is all borders, and you are desperate to be hemmed in. You don’t want an endless horizon. You want the dark body of the storm to bear down on you.

I wanted the pressure Pond promised me in the image of rain, in duration’s slow-burn. What I haven’t written yet, but is worth mentioning, is that there is a “you” in this memory. The You, thousands of miles away, whose body I was waiting to envelope mine again, like curtains embracing a screen. I had been limitless for so long, stretching my affections to where You lived in North Carolina, in Thailand, in Cambodia, that I charred against “another month,” “another week” of separation like a smoldering skyline. I was the woman in the trailer of the movie I never saw begging, “come back to me,” high-pitched and mewling.

Some memories are worth the act of forgetting. I’ll just say this: that night after watching Sátántangó, when I reached my apartment door, I kept walking. The anticipation of Your touch was hot on my skin, or was it just mosquitos scuffling in the setting sun? I’ll be plain: I was lonely. I was bristling with ardor, alive with the act of waiting, with the promise of Your presence (soon). As a professor of mine once observed, the instant you consummate your desire, the charge starts to dissipate.

In Tarr’s landscape, everything looks damp and cold, never warm. Hay, grass, and loose earth mediate the sound of falling rain. The soundscape is liquid, not just the screen. Michel Chion says there’s no soundtrack in film, which is to say that rainfall and hay become a singular art object, overlaid and interchangeable. But I sense (instinctually) a soundtrack brooding on the sideline of the frame that my ears subordinate in memory.

While my ears might fail me, my eyes cannot forget the elongated sequence with the cat, eventually strangled by the little girl ‘til it’s limp as a sock. The plain girl with the bangs and the furtive eyes. Her woolen socks. Her hands dirty, dark as oil stains. The daughter of another farmer? That seems right. I don’t think she ever spoke. Her mother is mostly off-screen.

Wait: maybe my ears never failed me. I remember the thump of the cat’s body hitting the wooden floor again and again, its low animal moans. When its wiry wail emanated, I twisted in my seat like a shoelace, desperate to unknot myself from the image’s relentless marriage to the sound. Each time she flung the cat against the floor, a rill of dust rose: a welcomed muteness.

Days later, a friend googled the scene. The cat had not died, the cat had been Tarr’s own. Somehow the facts (these were some of the facts) did not lessen the horror of what had happened. Which is to say, when my body hugged in on itself, my stomach ached afterwards, as if a casualty of too-many sit-ups.

I didn’t realize the girl pocketed poison until she was already dead. I remember her leaving home to walk to a ruin where she could lie down with her cat and with her silence under soughing, slender trees. As I write this, I want to say I understand her impulse. To bed down with your pockets empty and your hands full of a heartbeat faint and smaller than your own. To give up wanting. But I understand her impulse only through Tarr’s use of the long take, which is to say through the duration. As Susan Howe writes in Sorting Facts: or, Nineteen Ways of Looking at Marker, “it takes space to fold time in feeling.”

I remember sequences repeating themselves, in different iterations, from different perspectives of people situated in different spaces. We see the scene in the bar twice. Once with the camera in the room as the characters dance themselves dizzy and a second time with the girl before she suicides, looking in through the glass pane. In “Mechanical Eye, Electronic Ear” Trinh T. Minh-Ha writes, “A sliding relation between ear and eye. Repetitions are never identical.” Tarr structures the repetitions in Sátántangó like stanzas in a poem. Perhaps what I mean is the film is a poem. The repetitions of sequences (the girl in rain peering through the bar’s window, the man pissing against a house and another man who watches him) recall a pantoum or villanelle. Repetition with a difference, “drawing attention…to what lies between them.” There is a sense of seeing “all sides,” if you will: but I can’t remember a single character’s name, only vocations (the Doctor is one, I think). Yes, there is a sliding relation between ear and eye, but also a sliding relation between object and memory, what I once knew, and now what knowledge I’m fumbling toward like You, my lover, in our shared future.

Andrei Tarkovsky states in Sculpting in Time, “what people normally go to the cinema for is time: for time lost or spent or not yet had. They go there for living experience; for cinema, like no other art, widens, enhances, and concentrates a person’s experience—and not only enhances it but makes it longer, significantly longer.” Tarkovsky’s description of cinema is like a seizure of time such as when Madeline recites: here I was born, and there I died. I want to live not in the interstice (“in” which suggests, inherently, a boundary, a border), but within the wrinkles, the folds, the eons of time separating one annual ring from another. And while Madeline rehearsed her speech, I want to stutter in the search for the words, the memory: to flail in the waves, not walk along the red-wooded path.

I wonder if Tarkovsky’s theorization of cinema as a widening or an enhancement is comparable to Minh-Ha’s concentration on decentralization; rejecting totality and closed systems of meaning, Minh-Ha favors the gap, the interval, instead. It is within this in-between space where a plurality of possibilities percolate. I don’t want to compartmentalize this memory, this experience of Sátántangó as something closed. I want, as Trinh T. Minh-Ha writes in another essay, “Transcendence of the (un)known [that] opens out onto an [sic] limitless field. Everything remains to be done.”

There is everything to remember when I think back to that summer afternoon while watching Sátántangó. There was the acute ache of waiting for You, which I tended to over and over like tonguing a sore. There was the passing of time, a passing that seemed so impossible, yet inevitably inevitable. I reduced those months apart from You to counting, collecting, and then discarding the days.

Most of Sátántangó, too, is lost to me across the span of time as I write these words now. Seven hours is so much to excavate without re-watching the film like a proper film scholar, pen and paper at hand. But what the memories engender, the tussle with those memories over time, is a longing for all the remaining images I have yet to recover. In the images from this essay that cling to me, I see my mind’s selective memory: its search at work. How the memories of the film become not a catalogue of the film, but another creation altogether. Your absence generates this (w)holeness.

I can’t say why Sátántangó haunts me, only that duration has something to do with it—the distance in time from when I first pressed play to when I flipped my memory’s switch and the images sparked, jumping off-reel, discontinuous. Which is to say when the images come back to me now, some singular, some all at once, I want to close my eyes and open my palms as if under a rain that is only just beginning, whose thunder shakes my body full, clamorous with possibility.