The Complicated Epic-ness of The Last Emperor 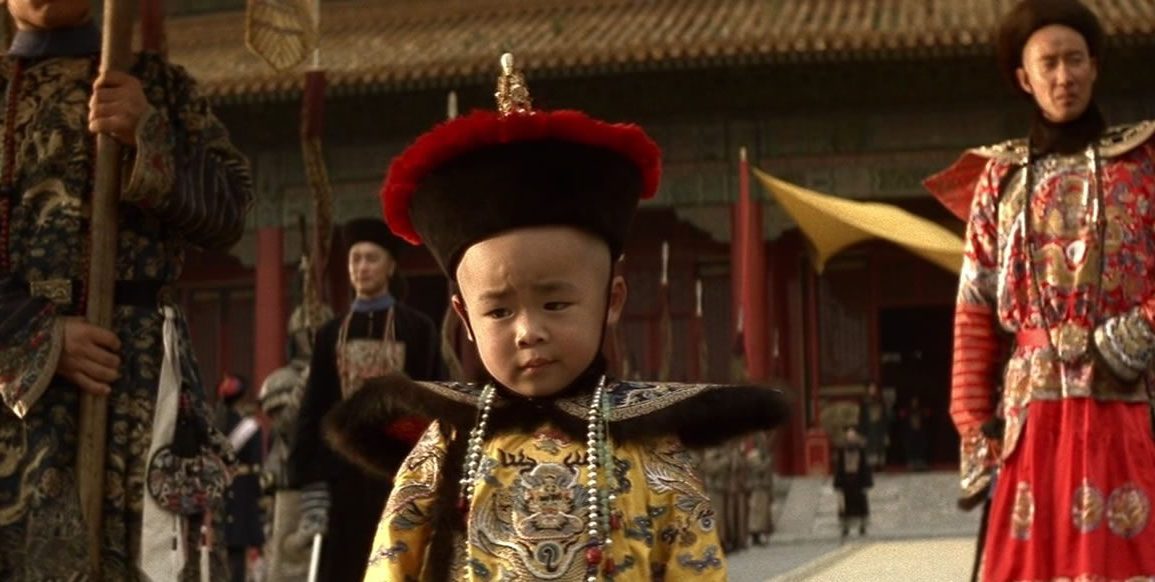 A long movie can be about inconsequential things, made consequential sheerly by giving them the time and space to expand onscreen. Without the need to economize, a trip to the grocery store can be afforded the same weight as the goodbye scene in Casablanca. The Last Emperor is not one of those movies. This is a film whose story, of Puyi, the last emperor of China, is not contained but has far-ranging consequences. Personal dramas of death, addiction, and insecurity are flanked by revolutions and war. And not just any war, but World War II; not just any revolutions, but the Republican revolution of 1911 and the Communist revolution of 1949. These are history-altering events—a 2 1/2 hour film seems like the least they could require. The Last Emperor is an epic, taking its place alongside other sweeping historical films. It shares with them, too, the grand sets, the huge casts, the lush score, the fantastic costumes—all markers of a classical “event” film.

But at its core, is an epic defined only by its length? Gravity comes naturally, almost as a right, when time is bestowed upon every scene, every gesture. But there’s more to it than that. The grandness of scale cannot apply only to the runtime, but to the story itself. There must be sweep in its scope; heroism (and perhaps hubris) should abound. Films like Lawrence of Arabia, Spartacus, Ben-Hur, or Ran all fit the description. They are each about great, or “great,” men (always men), compelled to prove that greatness by an internal drive, though often aided by external circumstances. This is an epic formula in the tradition of the first, of Homer’s Odyssey, and the format has largely stuck.

The Last Emperor, on the other hand, is about a man who disappears. A man who was promised greatness but was unable to achieve it, who was given everything without his say, and had it all taken away in the same way. Puyi recedes further and further into the background of his own story until he vanishes, a footnote to revolution and war. He was not a man with greatness within, but rather one bestowed greatness by an external system, treated as exceptional from his very first breaths. And in the face of historical upheaval, he proves no match. From the time that young Puyi’s question—if he is still the Emperor—is met with the reply, “You will always be the Emperor inside the Forbidden City,” he becomes less and less essential to the world around him, less essential to his own story. China in the first half of the 20th century is roiling with change; Puyi affects nearly none of it. He may be the “hero” within this epic film, but is nowhere close to a traditional epic hero.

In The Last Emperor, Peter O’Toole serves as a reminder of a true epic figure, and the contrast couldn’t be starker. He plays Puyi’s Scottish tutor Reginald Johnston, and his role in this film is supportive, gentle, non-showy. But it can’t help but recall his most famous performance as T.E. Lawrence in Lawrence of Arabia, so inextricably linked to that film as he is. (As Johnston dresses more and more in the late Qing style, one is reminded of Lawrence’s adoption of Arabian dress.) A contradictory, complicated hero, Lawrence nevertheless commanded his story. His ambitions, to liberate a nation not his own, are outsized; his bravado and confidence waver, but at their peak are unparalleled. So when the older O’Toole sits in a carriage with John Lone 25 years later, as the tutor bids farewell to the deposed Emperor on his way to exile, the contrast between their two heroes cannot be ignored. By casting O’Toole, Bernardo Bertolucci put The Last Emperor in conversation with Lawrence of Arabia, and it seems both a part of that same Hollywood tradition and distinctly lacking its core qualities.

On the surface, looking at the stills, the film would seem more the former than the latter. It opens in Mao’s China with Puyi held as a war criminal. But the first flashback to 1908 establishes the style of the film. As Puyi is transported by servants in a sedan chair, escorted by soldiers on horseback, to see the Empress Dowager on her deathbed, the scene is flooded with golden light, dusky and dramatic, and choreographed to a T, no personage out of their place. The camera moves around this mise-en-scène in a stately way, slowly paced and almost delicate in its remove. Ryuichi Sakamoto’s lush score swells as Puyi is taken from his mother and sent away to his destiny. Other iconic images follow: Puyi as a toddler, bedecked in his emperor’s yellow, running away from his golden throne and toward the yellow fabric in the doorway of the Hall of Supreme Harmony like it’s a parachute in gym class; Johnston, emerging from his car as a symbol of modernity into the throngs of student protestors outside the Forbidden City; a teenage Puyi separated from his servants by a white sheet, rolling back and forth as their silhouetted hands touch him through the fabric; Puyi as an adult being exiled from the Forbidden City, looking out the back window of Johnston’s car as Republican troops in their drab olive uniforms line the entrance to the old red gate.

Expertly composed throughout its entirety, The Last Emperor has a surfeit of these epic images. But they belie the hollowness at the core of the film. Trapped in the Forbidden City for his entire childhood, surrounded only by servants and the consorts of the emperor before him, Puyi is a deeply unhappy young man with no ability to change his circumstances. That scene with the sheet comes right before Johnston laments to the head advisor that Puyi is the “loneliest boy in the world.” In the very first scenes, the weight of becoming the emperor is conveyed, as the Empress Dowager explains the role to a toddler; his open, unlined face stares blankly as she tells him things he couldn’t possibly understand. Afterward, when he asks his father if they are going home, his innocent question is met with a kowtow.

As an adolescent, his lack of agency remains. Hearing his mother has died, he jumps on a bicycle and begins riding toward the main gate, able to catch only a glimpse of the bustling city outside before the heavy doors are shut in front of him by an army of servants. This lack of personal agency is matched by a lack of historical agency, as the Emperor is compelled to abdicate in 1912, at 6 years old. He becomes a figurehead in Republican China, then after his expulsion from the Forbidden City stays in the Japanese embassy, aligning himself with the Empire of Japan until the end of World War II. As the chief executive of Manchukuo and later its puppet monarch, his actions are partly fueled by a desire to be Emperor again, but he has little voice in these roles.

Why is The Last Emperor, then, Hollywood’s epic of China? As a British-Italian production, it is likely the film about China the most Westerners have seen. It has garnered the most awards, and is the only film listed under “China” in the taste-making Criterion Collection. But it lacks the agency of other epics, both within and without the film. An epic ought to be a story to regale the audience with, one with a charismatic center, as in their original conception. But here, in The Last Emperor, is a man with diminishing power and little internal drive, and a country humiliated, feasted upon, with no redemption in the end. It is a story of one of China’s darkest moments, taking place during the last half of what is referred to as the century of humiliation, a period of military defeat and occupation by foreign powers. But is the story of China’s last ruler being overthrown—the country plunging into warlordism as he is seduced by the Japanese, who then invade the country and install him as a puppet monarch—deserving of an epic? Or, perhaps a better question: Would this be the epic a Chinese filmmaker would make?

In declaring something a historical epic, giving it that time and space, you’re also declaring that the narrative it tells is important. But who is the ultimate arbiter of importance? Even in a tragic rather than triumphant epic, such as The Last Emperor, there’s a conscious decision to frame things in a certain way, to prioritize a certain point of view. In Bertolucci’s film, the imperial view is centered, the view of classical China, an almost apolitical one set aside from Nationalists and Communists. It’s a view that prioritizes the Western imagination of China as a place frozen in time, the dynasties all tumbling together as Mulan and Confucius and Ming vases share the same space, the change from then to now only delineated by the appearance of Mao’s portrait on the Gate of Heavenly Peace. In depicting a China so far removed from the China of today, and even of the film’s 1987 release, it preserves the image of China as unknowable, un-modern, vulnerable.

Epics are perhaps prone to this. Despite the long runtime, nuance is often lost when blowing up a story to heightened proportions, by painting a narrative as echoing the great struggles of humanity, of good versus evil, light versus dark. A long movie can show us the stretch of history, but the burden of its epic-ness is that it must attribute a thematic arc to that history. The Last Emperor’s arc, of a backward China never quite resolving its backwardness, and the lives destroyed in its wake, makes for a particularly tragic narrative. The lack of agency at its heart deflates any sense that it could be an epic of China, nevermind the epic of China, remembered by Western moviegoers as one of their few cinematic interactions with the country.

It was certainly my first introduction to China (not illustrated by Disney or silk-screened onto a scroll in a Chinese restaurant) and I was entranced. Watching it for the first time on my bedroom TV, it was like a jewel box, all vibrant colors and silks, fur trims and pearls. A concentration of richness set against my pale green walls; everything my world was not. It overwhelmingly shaped my perception of the country, a rendition of a place that in its foreignness was perfect for projecting the fantastic onto. When I remember what The Last Emperor meant to me, narrative concepts are a distant second; the images are what stuck. I didn’t comprehend the tragedy, beyond a superficial recognition that Puyi was once the ruler of one of the most awe-inspiring kingdoms of all time, but died an unknown gardener. The direction, the cinematography, the music, the sets and costumes, they all obscured this ultimately somber story.

So perhaps The Last Emperor is an epic that shouldn’t be, perhaps its sweep and grandeur belong to another story entirely, one without a victimized center. It’s a difficult notion to consider, when I think of the place the film has in my heart, the way it was my first introduction to the idea of film as awe-inspiring, film as something major and gorgeous. It’s hard to respond to that emotion with condemnation, to tell that previous version of myself that her fascination was misplaced, that the world she was so enamored by was the product of centuries of exoticization. There’s no rationalization that allows me to both revel in the film that was once so dear to me as a kid and to declare it undeserving of its genre. Instead, The Last Emperor will forever loom large in my imagination, the epic that I sometimes wish wasn’t one.