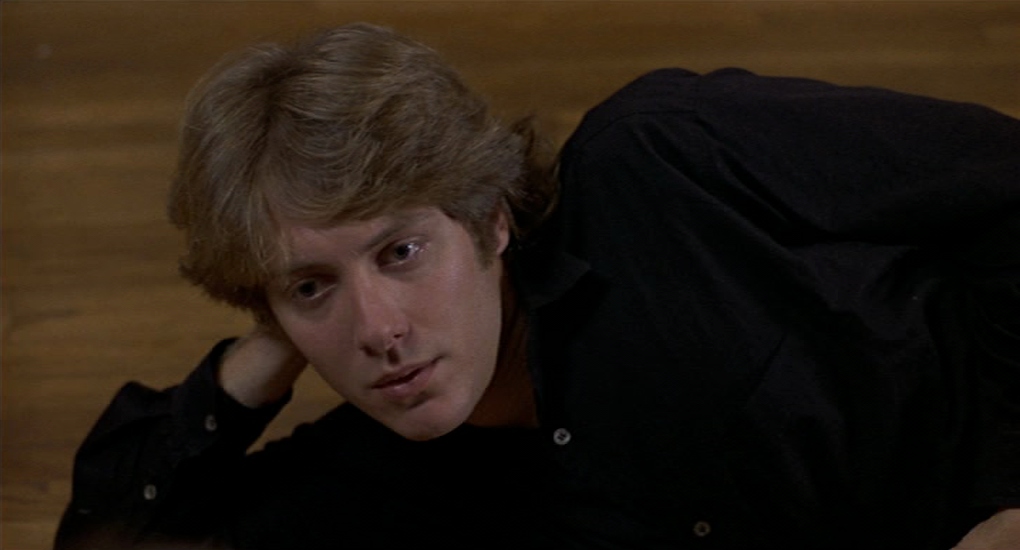 I don’t remember precisely when I came to understand that the appeal of a bad boy is less about a Ferrero Rocher-like opposition between rough exteriority and private softness than it is about a fantasy of power: specifically, yours. With the convertible bad boy, you don’t just deserve love; you inspire it. His transparent unsuitability for entanglement underscores how special you are, you who has the patience and insight to withstand and see past his callousness. In this paradigm, a man who can do both demonstrates a talent for selfishness so unrelenting that any lapse toward neutrality feels unduly monumental, like the ecstasy of silence when screaming garbage trucks finally pull away from your curb.

It’s a complicated thing: sensations of invisibility and un-exceptionalism stoke a desire to be seen and feel special, but the co-wish to remain as small as you feel—as you’ve felt—routes desire toward inhospitable prospects, pathways along which longing is likely but disappointment is assured. You can stay up writing out their name like a spell, dreaming about their motorcycle, their private plane, a spare key; about getting pulled onstage, getting out, getting to a place where everything will change—without realizing that loving someone distant or unkind or otherwise romantically feral tends to keep things much the same, such that you remain right where you are, safe in the loneliness you know.

Like the dream interpreter/architect that it is, cinema understands this wish and, in its sympathy for our self-sabotage, allows an alternative to take shape. A bad boy who only seems bad. Cheeky, cruel, or withdrawn, but also unmistakably attentive, discerning, open. He’s likely complicated—tortured, even, but decent, with a quality of darkness evidently (or perhaps recently, and hopefully barely) contained. Containment is crucial, because he does the most with less. It’s a peep show, not a titty bar (note: the author’s shared enthusiasm for Magic Mike will confirm she holds nothing against actual or metaphorical titty bars), where the foremost tease—the headliner among a pantheon of dissonant cinematic thots—has to be early James Spader.

In a recent essay, Lena Dunham lamented a new lover’s failure to understand and conform to the specificity of her desire. Hadn’t she said she wanted him to be mean? Yes, but—as she clarifies—“I want to be humiliated sweetly.” Whether or not such nuanced collaborators exist in real life, film offers a long archive of their allure. Well before Christian Grey donned his dumb ripped jeans, James Spader embodied the paradigmatic combination of vulnerability and composure; his appeal, from Crash to Secretary, requires our conviction that he would, and would like to, and could, punish us—only gently. And paving the way for Fleabag to trademark the Hot Priest, we have Spader behind a camcorder eroticizing acts of disclosure, collapsing hot shame with the relief of being heard.

Spader first took to the stage of my libidinal theater as the reptilian high school “antagonist” Steff of John Hughes’ otherwise soppy Pretty in Pink. How, as a teenager experiencing deep alienation from Lily Pulitzered northern Virginia, I had the unlikely erotic literacy to appreciate Steff’s double-breasted jackets hanging open around a yacht tan, remains uncertain. By 1990, his turns as a bullied Connecticut transplant in Tuff Turf and Brooke Shields’ explosive brother in Endless Love had Spader covering M magazine as the prototype for “Neurotic WASPs.” The branding was perfect for Hughes, whose beloved coming of age films purport to critique the status and wealth with which they’re actually obsessed. Sure, The Breakfast Club’s princess and jock are unhappy—but so is everyone else, and the leather fist John Bender raises in the iconic final frame has only just closed around Claire’s diamond stud.

Two years later, in Pink, we’re meant to empathize with kooky outsider Andie and split our remaining investment between love object Blane (Andrew McCarthy exuding a flavorless appeal well summarized by Micah Nathan as that of “a non-alcoholic beer, an unsalted pretzel”) and best friend Duckie (as least they could share clothes). Instead, I fixated on Steff. Listening to Morrissey sigh let me, let me, let me, let me, let me on the movie’s soundtrack, I replayed the image of Spader leaning against Andie’s car. How he doesn’t bother to close his mouth when she rebuffs him. The impossible admission (or ploy?) that he’s liked her for four years, the impossible chic of an unbuttoned white oxford shirt on an alleged high school senior, the impossible focus he maintains from behind aviators, even as he neatly bites a cigarette from the pack and replies through his teeth, You’re a bitch. It’s as matter-of-fact as a blow dart—a surgical humiliation that’s not wholly dismissive. He’s still interested, and so are we.

You can squint at Steven Soderbergh’s sex, lies, and videotape—at the continuity of effete names, the creepy magnetism centered and softened, and the way the film frames Graham as an old friend from college while repeatedly remarking on how dramatically he’s changed—and see Graham as a sort of sequel to Steff: neutered, from one perspective, or perhaps radicalized, from another.

sex, lies circles two men, Graham and John, and two women, Ann and Cynthia, whose relations the film presents and shuffles such that each pairing demonstrates the concurrence of intimacy and estrangement at work in various forms of the couple. Reinforcing their cartoony intra-gender oppositions—the virginal beauty and the earthy slut, the grown frat guy and the arty eccentric—is a mise-en-scène whose budget-conscious naturalism nearly masks its meticulousness. We see self-conscious, respectable belle Ann (Andie MacDowell) awash in natural light as the same frame holds her sensual younger sister Cynthia in the florid chaos of her bedroom. As obtuse alpha-lawyer John, Peter Gallagher is the suspendered baritone foil to Graham’s soft-spoken ascetic. Married to Ann but sleeping with Cynthia, John has and eats his proverbial cake, while Graham eschews belonging(s) altogether, arriving alone in Baton Rouge with a crumpled bag of strawberries.

But if the film begins with schematic contradiction, we come through unanticipated acts of compassion and coalition to a more complex consideration of difference. I’m thinking of Cynthia asking Graham if he thinks she’s pretty, and then, flashing her woundedness, if she’s prettier than Ann. Graham’s answer rescripts the terms of her questions: not yes or no, but, “Different.” In an interview curated by the Criterion release, Laura San Giacomo compares the shoot’s actual humid setting to the movie’s thematic climate in revealingly contradictory terms: “Everything was so present and feelings were so…raw, and hidden, and so much was going on.”

So present, then so hidden—there’s an impulse to ask, which is it? sex, lies hangs precisely on the tension between felt presence and material absence, depicting and reproducing desire as airlessness, in which suggestion and secrecy build atmospheric pressure, and Spader’s Graham is the eye of an imminent storm.

What’s hot about a guy we meet wiping his armpits in a gas station bathroom? He listens. He makes more unembarrassed eye contact than a new acquaintance has any right to. He isn’t just waiting for his turn to speak. He’s openly nervous, yet utterly self-possessed. Put very, very lightly, he’s intense—a stranger who takes you apartment hunting. Focused and conspiratorial, he conjures intimacy from thin air. “I’ve been watching you,” he tells Ann in the restaurant where she fondles her over-served glass of wine. Meaning: we just met, and already I see you. I notice things about you and have thoughts about them that I don’t even say. On film, James Spader’s staring Basset eyes unmistakably express the act of thinking without disclosing the contents of his thoughts. The resulting transmission is clear and opaque, fixed but indefinite. So present, so hidden. And to be the object of fascination for a man who truly looks, sees, thinks, and wants—to compel his attention, and set into motion that which, ugh, “isn’t supposed to happen”—would more than merit ruining life as you knew it, even if you hadn’t discovered your sister’s earring tangled under the master bed.

We often think of close-ups as conferring access to characters’ interiority, via the expressive unit of the face. But Amy Taubin’s evocative discussion of sex, lies as a literal “skin flick” highlights the way Soderbergh’s tighter shots collude with the climate, drawing our awareness outward to the surfaces of things. What we get, then, in the film’s thirstiest moments, are “extremely tight close-ups, held long enough for the skin of their faces to become naked indexes of their inner lives. They blush, they sweat. We know what their cheeks would feel like if we were to touch them with our fingers as we do with our eyes.”

This sense of cinematic skin contact comes to a head when Ann—having doubly discovered Graham’s propensity for recording women discussing their sex lives, and Cynthia’s candid turn through his makeshift studio—sits for her own interview. Ann flips the diegetic camera back on Graham, and the film camera echoes her insubordination, cutting in close-ups of a cassette cartridge and the camcorder lens, and trespassing the 180-degree line in its wary rotation. He’s perched on the arm of the couch when she approaches from behind. She applies her fingers to his shoulders, and his eyes close; we watch the breath leave his body. A moment later, hovering, Ann covers her face with the flat of his hand and parts her mouth under his palm.

And even after all that, you don’t believe you’ll see Graham and Ann kiss, in part because that’s how much you want to. Ann rearranges herself supine on the cushions as Graham reaches forward to stop the rolling tape. Taken together, both the revelation (of the kiss) and the redaction (of whatever follows) well suit a film “about” conversation that nevertheless hinges on silence and elision, as if the movie itself upholds John’s adage about the salt in Ann’s home cooking: “You can always add more, but you can’t take it away.”

Soderbergh understood the potency of that leanness. After nixing his original plan to shoot in black and white, he settled on “a palette that I felt needed this Thursday afternoon kind of quality. In terms of the light and the color, that’s what I was thinking about—a certain time in the afternoon where the day is just beginning to shift from one mode to another…I was trying to recreate the sense that I had of having these conversations where you felt like there was no one else alive.” The heat of Graham’s attention, too, is a kind of portable golden hour, singling out whatever it touches for uncanny enhancement. Who doesn’t want to be seen in that light? The deepest turn-on is the reassurance you haven’t fucked it all up already. That the life you do your best to build isn’t sealed airtight; a person you haven’t heard of yet could still turn up and make you part of their problem.