A Treadmill to Nowhere

Is there a title card more damning than “Based upon the Parker Brothers’ Board Game?” There have only been a handful of movies based on board games—a medium that has failed to capture the zeitgeist as well as, say, comic books—and all have been critical failures. Ouija (less a board game than a slumber party shit-stirrer) was panned by critics, and not even Rihanna could save Battleship, based on the Milton Bradley joint. Clue, released in 1985, was the very first board game-based movie, a notion that was considered at best silly, at worst crass, and—ultimately and undeniably—a flop. The Jonathan Lynn-directed film grossed only $14.6 million at the box office, with an estimated budget of about $15 million. Critics were also unimpressed by the murder mystery comedy: The New York Times’ Janet Maslin found Clue devoid of “genuine wit,” and Roger Ebert, though more generous with his 2-out-of-4-stars review, lamented the “very, very thin” screenplay.

On its serpentine, unlikely path from game night to the silver screen, Clue roped in five potential screenwriters (among whom were, unbelievably, Tom Stoppard, Anthony Perkins, and Stephen Sondheim) before landing Lynn, an English actor and TV writer. Executive producer John Landis only had a loose outline for Lynn to flesh out: six strangers, each identified by a color-designated alias—Colonel Mustard (Martin Mull), Mrs. White (Madeline Kahn), Mr. Green (Michael McKean), Mrs. Peacock (Eileen Brennan), Miss Scarlet (Lesley Ann Warren), and Professor Plum (Christopher Lloyd)—are invited to a dinner party at a Baroque mansion. When their supposed host and long-time blackmailer Mr. Boddy (Lee Ving) is murdered, the guests and Wadsworth the butler (Tim Curry) must determine who the murderer is before the police arrive.

As the story developed, more bodies piled up and motives became murkier. The threads of a dinner party gone awry were stitched together until they became a knotty, convoluted yarn, with talk of fusion bombs and war profiteering and state department secrecy. To make things more complicated, Landis requested that the film have multiple endings with a bevy of potential killers, each one’s tactics and motives able to seamlessly mesh with the film’s first 80-some-odd minutes. When Clue was released, theaters were assigned ending A, B, or C. Landis envisioned that audiences would flock back to theaters to see the endings they had missed. Instead, the rollout was deemed gimmicky and polarized critics. Ebert called the idea “ingenious” if only the movie were good enough to inspire rewatchings. “With Clue,” he wrote, “one ending is more than enough.” Gene Siskel scathingly suggested that the mystery would benefit from three different middle sections instead. He wrote in the Chicago Tribune, “Clue offers a few big laughs early on followed by a lot of characters running around on a treadmill to nowhere.”

But what if we reconsider the treadmill? Siskel’s primary criticism is that Clue is an exercise in futility, a whodunit with enough answers to render the question obsolete. Even the film’s very premise is something of a punchline. When Wadsworth shouts the literal rules of the game— “That’s what we’re trying to find out. We’re trying to find out who killed him, and where, and with what”—he is subsequently clocked in the head by a falling candlestick. In that moment it’s not the answer that matters, but the mounting mania and undercutting silliness of it all. What if, Clue seems to ask, futility isn’t an Achilles’ heel? What if it’s the point? The result is a film that honors its source material and transcends its limitations.

Not only an homage to the game, Lynn and Landis’ adaptation is simultaneously a murder mystery, a screwball comedy, and a Cold War farce. Clue begins in true “dark and stormy night” fashion; on a rainy New England evening in 1954, six strangers, brought together by identical cryptic invitations, make their way to the eerie Hill House mansion. Clue, being first and foremost a game about murder, necessarily creates an atmosphere of suspicion and finger-pointing. Even before anyone has been killed, the main characters seem to have nothing but disdain for one another; they shoot each other dirty looks (especially at the accident-prone Mr. Green, who’s spilling champagne and shark fin soup left and right) and resent any nascent nosiness about their personal and professional lives. One can’t help but link the tense, paranoid environment to the Cold War-era setting. In the film’s opening moments, the cook is watching the Army-McCarthy hearings on TV as she prepares dinner. The rest of the film is peppered with references to the political subtext of the era, whether it’s allusions to the arms race or a phone call from J. Edgar Hoover (“He’s on everybody else’s [phone], why shouldn’t he be on mine?”)

Much like the Cold War policies of the time, the farcical hijinks in Clue are largely caused by the dissemination and withholding of information. First, there are the secrets based upon which Mr. Boddy is blackmailing the guests: Colonel Mustard is a war profiteer; Mrs. White is the (strongly implied to be) mariticidal widow of a nuclear physicist; Mr. Green is a closeted homosexual working for the state department; Mrs. Peacock accepts bribes on behalf of her senator husband; Professor Plum is a philandering psychiatrist working for the World Health Organization; and Miss Scarlet operates an escort service in Washington. In keeping with the times, Mr. Boddy’s reason for blackmail is pure holier-than-thou patriotism. Wadsworth explains, “He believed that you were all thoroughly un-American.” Then there are the additional victims to contend with, all killed by an unknown assailant as the night unfolds—the cook, Yvette (Colleen Camp) the maid, a passing motorist, a police officer, and a singing telegram girl. Each of them is connected in some way to the six guests. It’s only at the end(s) of the film that we learn who knows who and why. 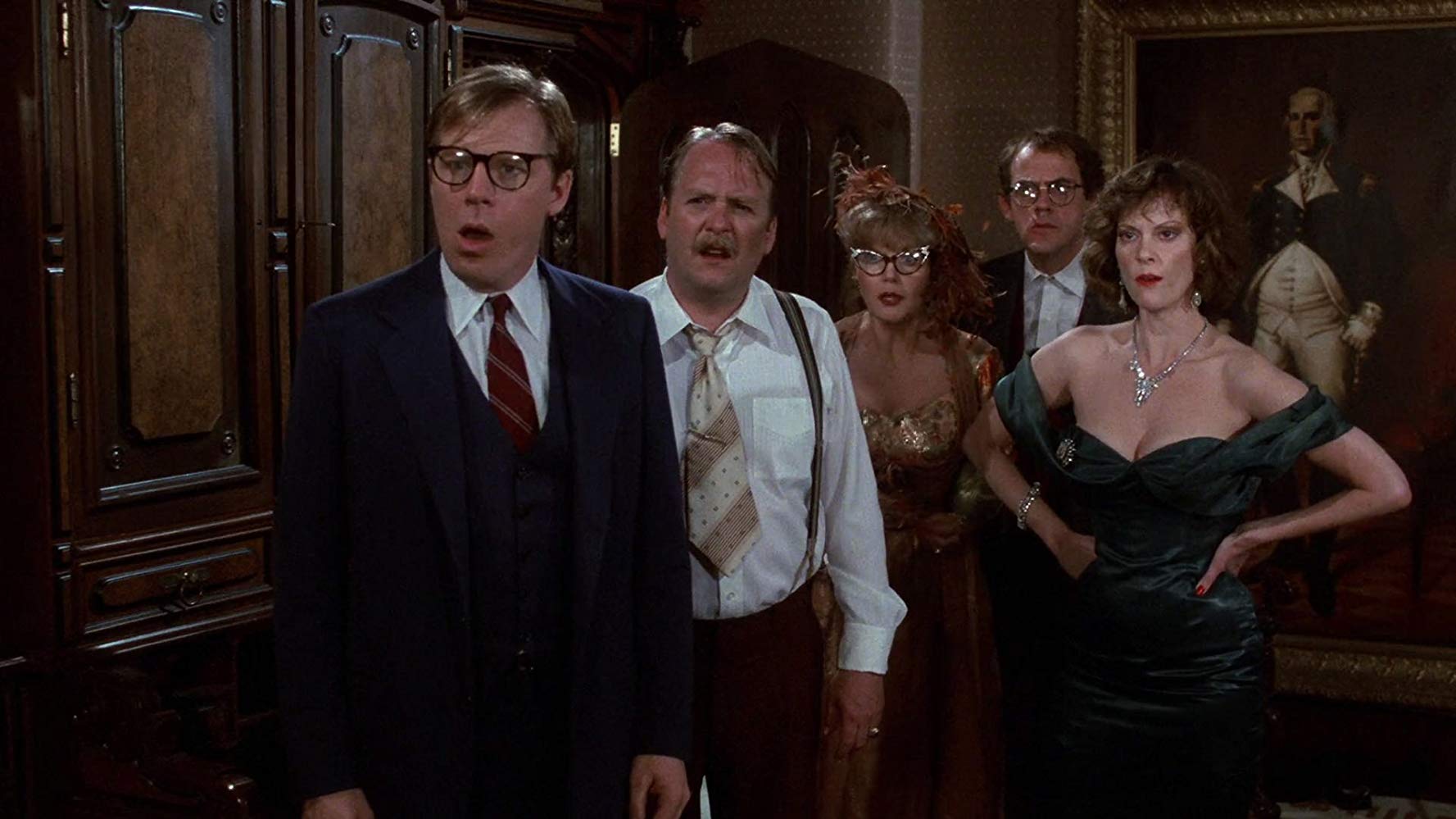 It’s a lot of information to swallow and, ultimately, none of it really matters. Across all three endings, the government secrets are moot, summed up only by a recurring coda: “Communism is just a red herring.” Instead it’s the deliberately, deliriously confusing plot points that are the real punchline. “Now there’s one thing I don’t understand,” a guest says in every ending, as Wadsworth is summarizing the events of the evening. Then, the punchy, all too relatable retort: “One thing?”

As is to be expected in a proper murder mystery, we don’t solve the whodunit until the end of Clue, when Tim Curry breathlessly recreates the night’s entire sequence of events. There is, however, a slow build to the butler’s dizzying performance. The film begins much more solemnly, with an ominous, not yet bouncy score and foreboding weather. The dour atmosphere is quickly interrupted by the film’s first joke: Wadsworth steps in dog shit. It’s a cheap gag, but it nonetheless sets the tone for the film. As the guests gather in the library to sip champagne in formal attire, each crinkles his or her nose at the offending odor. It marks the beginning of an evening in which all propriety collapses.

From the onset of the movie, it’s clear that Clue wears its screwball influences on its sleeve. The characters banter at a breakneck speed, with Lynn reportedly having made the cast watch Howard Hawks’ His Girl Friday to prepare. Over the film’s 96 minutes, though, Clue proves to be just as indebted to slapstick. It’s about 30 minutes in, just after the death of Mr. Boddy, that the mounting hysteria sets in. Frenzied physical comedy takes over as the guests move at a faster clip, squeezing past each other and through pieces of furniture, testing the constrictions of their formalwear. Mr. Green anxiously slaps Mrs. Peacock, who thinks she’s been poisoned (the infamous, sniveling line: “I had to stop her from screaming”).

The six partygoers eventually decide to break off into pairs and search the house for a killer who isn’t there, convinced that an anonymous intruder is responsible for the murder. Indeed, much of the film’s middle is an exercise in futility; only Wadsworth seems able to make heads or tails of the rising body count, as well as the compendium of secrets and potential motives. As for the rest of the guests, they seem to be filling time between murders, making empty speculations and providing opportunities for silliness to escalate. The only thing each has in common is their own entrenched denial. Not only is each member of the group certain of their innocence, but, by extension, their own perceived sanctimony, despite having owned up to blackmailable offenses.

As the night wears on, the guests become more and more frantic and physical, running around the house, colliding into one another, and slapdashedly doling out whiskey; gone are the dainty pours and conventional decorum from dinnertime. While there’s a considerable uptick in physicality among the guests, there’s also an increasing sense of banality, creating a humorous contrast between flailing bodies and jaded attitudes. When the final three victims are killed within a matter of minutes, their deaths are met with more exhaustion than terror. Upon discovering Yvette, who’s been strangled with a rope on the billiards table, the partygoers look on with blank stares, their eyes glazed over by the night’s inevitable, trite bloodlust. The six strangers, now bound by a “safety in numbers” philosophy, pile corpses into the lounge like bags of laundry, dryly remarking that they’re all present and accounted for. It’s only when the final death toll reaches six that Wadsworth soberly admits, “This is getting serious.”

Critics dismissed this “running around” portion of the film, but the guests’ manic aimlessness grows so ridiculous as to become more satisfying than the whodunit’s grab-bag of conclusions. Indeed, what’s made Clue a cult favorite isn’t the arbitrary culprit reveal. Rather, it is the jarring joy of seeing formalwear-clad party guests slapping each other and dragging one another up staircases and over sofas. More memorable still is the crackling dialogue, straddling the line between saucy and silly, even when the subject matter turns morbid. Matters of life and death are debated with the verbal ping-ponging of a high stakes Abbott & Costello bit, whether questioning if “no there is or no there isn’t” another person in the house, or if there really is another bullet left in the revolver. In a way, the film’s multiple-ending format is the purest expression of its game night source material. We don’t play board games to rush to the end, nor to experience the same result every time. It’s about the noise we create in between. Clue, for all its zany physicality and jabbing exchanges, honors the game’s multiplicity of outcomes. When the movie’s guests are seated for dinner, Wadsworth paraphrases Tennyson, unknowingly (and morbidly) summarizing the film’s celebration of well-meaning if ultimately meaningless action: “Ours is not to question why, ours is to do and die.”