The World Spins Madly On: Only Lovers Left Alive and Long Dark Nights of the Soul 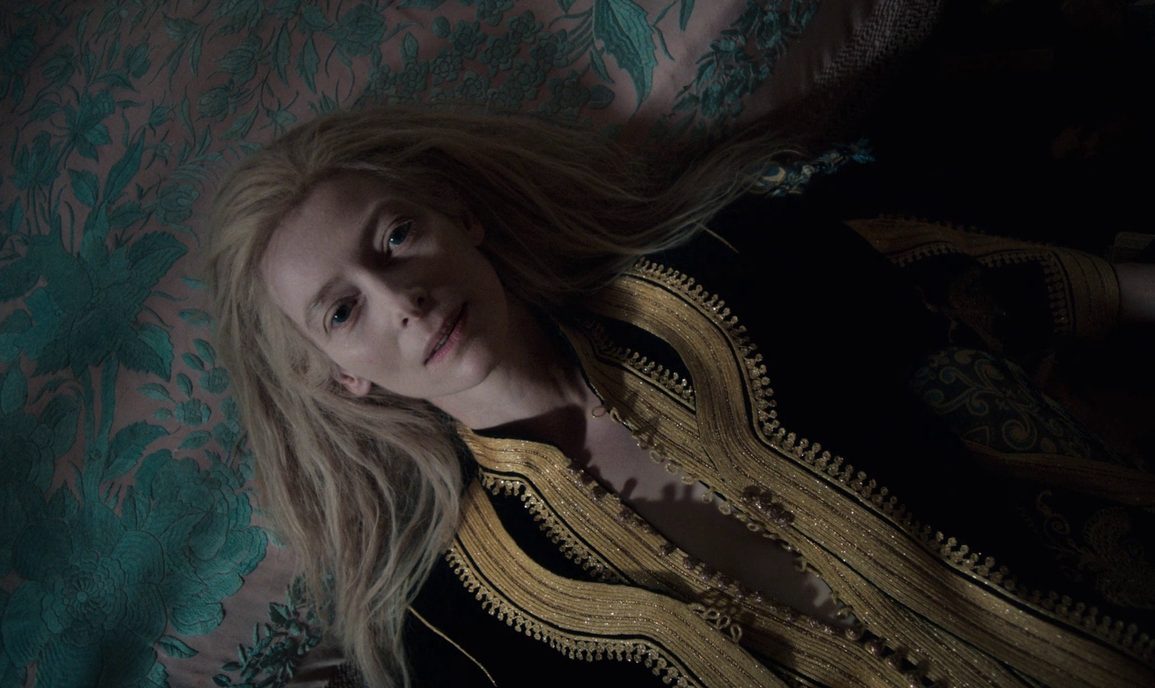 “I woke up, and wished that I was dead
With an aching in my head
I lay motionless in bed…”

What better person to understand long dark nights of the soul than a vampire?

Adam is a recluse, living spiderlike with a pile of guitars in a run-down house in a run-down corner of Detroit. He writes and records music, refusing to leave except for rare supply runs for O-negative at the local hospital. His work is a long string of funeral songs, weighty and slow, nothing to quicken the pulse or excite the brain. Adam’s songs lodge in the corners of the cerebellum, whispering, Aren’t you tired of all this noise? Wouldn’t it be lovely if you could just slip away into the long dark?

Eve hoards books, adores the written word in every language. Volumes stack neatly against the walls and around the bed of her apartment, pages providing the only clutter. She runs her hands over every page as she reads: left-to-right for English and Italian, right-to-left for Farsi, up-and-down for Chinese, the only sound the rasp of her hand over paper. She pauses over a page, as if remembering something she’d unconsciously set aside, but hadn’t chosen to forget. The illustration depicts the creation of Adam and Eve by Lorenzo Ghiberti, one dark figure bent over the other.

The title of the film is true: this is a love story. But it is not romantic. It has no meet-cute, no miscommunication, no contrived separation nor misunderstanding. It is about marriage, and about weathering the long dark nights of the soul just long enough to see the light again, taking each wave as it comes and then bracing for the next one.

Adam and Eve are married so comfortably that they are content to live and to love each other from thousands of miles away, separated by oceans—and by the unpleasant restriction of only being able to travel at night. They have their preferences, and they own them unapologetically: Adam has his clutter and outdated technology and music, Eve has her books and her thirst for discovery and intense friendships with other creators. They have been married to each other at least three times; they’ve developed the kind of quiet relationship of those who have been together a very long time, speaking mostly about trivia because they’ve already covered the heavy topics lifetimes before.

Eve comes to visit Adam because of his black mood (a previous mood made him miss “all the real fun” of the Middle Ages and the Inquisitions, Eve says), but she knows better than to broach the topic until he’s ready to discuss it. She won’t cross a threshold until invited in. Instead they spend some time getting caught up, playing chess and eating popsicles made from O-negative. Adam takes her for drives around Detroit, showing her Jack White’s childhood home, a converted movie theater, the small red mushrooms growing unseasonably early in his garden. They fall asleep coiled together; they walk together holding each other up as though they’ve both washed up on a shore half-drowned. There’s a sea change at hand.

Adam has lived for centuries in the shadows, just outside the threshold of greatness, unwilling to darken its door but unable to stay away. He claims friendship with Tesla, with Poe, with Shelley and Byron and Mary Wollstonecraft, but they’re all gone now. They’ve been lost to time and age, half-remembered by a half-conscious world that will murmur their names in recognition but won’t register that these were once flesh and blood people. Adam is sick of half-remembered names and forgetful people. He’s tired of his own weariness, and he longs for sleep.

Eve lives in the shadows, too, but hers are more literal than existential. She’s comfortable venturing outside at night with a scarf over her face, walking through the narrow streets of her home city of Tangier through the warm night and the buzz of the yellowy sodium lights, ignoring the advances of the drug dealers. Even though it’s long after sundown, Tangier is alive with musicians and restaurateurs and the occasional tourist, none of them sleepy despite the late hour, but all of them unaware of the strange woman in white among them.

Adam’s friends were brilliant, but like the world they inhabited they were all too human. Some may have done everything attributed to them: made the discoveries, written the poetry, drawn the illustrations, developed the inventions. Others were thieves, taking the work created by the people lurking in the shadows around them and attributing it to themselves, because they were the ones unafraid to live in the light. Adam gave Schubert an adagio, which Schubert presented as his own; a friend of Eve’s wrote the plays attributed to Shakespeare. Adam won’t step into the light himself—he detests fame, won’t play any of his own music where people can hear it—so he lives in a vampiric relationship with the artists he surrounds himself with, consuming their work as though it’s his lifeblood, and sometimes giving them his own songs, refusing to take the credit even as he despises the people who profit from his art. He’s sick of ordinary people, he explains to Eve, and “their fear of their own fucking imaginations.” He’s found himself caught between two absolute and contradictory truths—he cannot take the exposure of the limelight, and he will never being able to stop creating art—and the tension, long dense, is becoming unbearable.

Adam knows that he won’t be able to keep living as he is; someday, perhaps soon, the tension will snap and everything will go straight to hell. He can see the warning signs already, and they aren’t just the unwanted fans smoking cigarettes outside his house, hoping for a glimpse of fame. Adam knows from experience that once people stop stockpiling oil they’ll begin fighting over water; he’s horrified by the pollution of the environment by industry and the pollution of human bodies by drugs and alcohol and general carelessness. Already he and Eve have to be careful to avoid contaminated blood. They may be vampires but they’re not invincible; they’re just as vulnerable to sickness as any other creature. Adam is intensely aware of their precarious situation. He can see nothing but the edge of the abyss. His music is an expression of his despair, slow and long and dark and mournful, and he’s sick of it, but he can’t stop making it, until the mood reverberates around him so palpably that Eve feels it from half a world away, and decides to come and visit him once again.

Eve is willing to dance around her reasons for coming to visit her husband, until she finds the gun.

Eventually the truth must come out. Eve’s friend Kit had referred to Adam as a “suicidally romantic” idealist; Eve hopes that only the “romantic” part of the phrase is true. It turns out that neither are correct. The romanticism has been driven out of Adam, replaced by a cynicism born of despair. He’s bitter over the treatment of Tesla, over the ongoing litigation of Darwin’s theories in public opinion, over the waste and mindless consumption of mass culture. His despair has been percolating for so long that he doesn’t see a way out; he’s even procured a modern-day stake in the form of a wooden bullet.

Adam can feel the world tilting, changing swiftly around him, and he can do nothing to stop it. Despite the wood bullet, he seems unsure of what his next move should be; the weapon is almost a dramatic affectation at this point, although he’s dangerously close to using it anyway. He’s just tired of watching the world turn heedlessly on, and he wants to stop and get off.

Eve has also had enough: she’s seen enough history to know that things will indeed change, but not necessarily for the worse. “How can you have lived for so long and still not get it?” Eve asks him. “This self-obsession is a waste of living!” Her emotions flicker across her face, almost too quickly to fully register: concern, anger, love, care, each one spinning into the next as she talks him down from his cliff’s edge; we get the sense that they’ve had this conversation before, less serious perhaps, but still the same ground. “It could be spent on surviving…appreciating nature, nurturing kindness and friendship. And dancing!”

Adam doesn’t answer, and she doesn’t need him to. Instead of waiting, she puts on a record of “Trapped By a Thing Called Love,” then begins to dance by herself in Adam’s bathrobe, swaying in time, then turning slowly around the coffee table until she’s back by Adam’s side. She reaches out a hand, almost carelessly, more invested in the dance than in getting Adam to dance with her, and he gets up and joins her barefoot on the carpet. The two sway, and spin, and then Adam wraps his arms around Eve, a quick embrace before he spins her around again, then spins around the living room with her.

Night comes as the world turns. Daylight will break again, and then night will come again in turn; it’s part of the deal of basic physics. Adam has had long dark nights of the soul before, none of them the same as the ones that came before; this may very well not be the last crisis, nor the worst one. Perhaps Adam has had to talk Eve down from her own ledges; the two temper each other, their relationship too even-keeled for them to remain unbalanced one way or the other for long.

Near the end of the film, Adam and Eve find themselves alone, stranded in Tangier without the O-negative they need to survive. Adam had to leave his instruments behind in Detroit. They’re weak, tired, and vulnerable, but instead of raiding a nearby hospital, they wander the city. Eve disappears for a few minutes. Adam finds himself entranced by a musical performance in a nearby club—he won’t go in, but he’ll listen in the doorway—as a Lebanese singer pours her soul into the microphone.

Eve returns with an oud. Adam is refreshed by the song he’s heard; Eve gives him the means to create new music. They find themselves fresh blood. Sometimes, to create, it’s first necessary to consume. The cycle begins anew. The world spins madly on.