Disarticulating Neo-Noir Masculinity in In the Cut (2003) 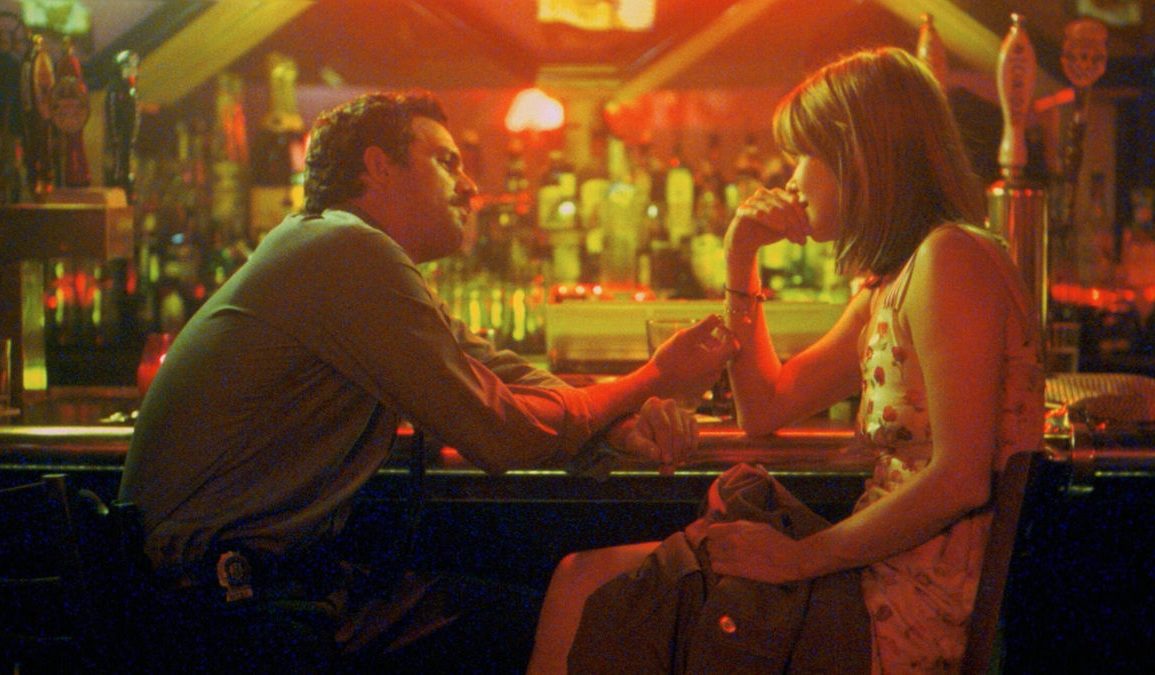 “All you need for a movie is a gun and a girl.” Jean-Luc Godard’s famous adage aptly applies to noir; this hyper-masculine genre traffics in moral ambiguity, violence, sex, and shadows that pearl, thick as paint. Jane Campion’s neo-noir In the Cut doesn’t feminize the genre as much as it reconstructs “a girl” to be a fully subjective woman, full of faculty and sense(s). The stereotypes around which so much of genre cinema hinges slough away under Campion’s attentive eye. Yes, In the Cut fits Godard’s criterion, and the motifs central to our understanding of noir’s boiler plate narratives and themes, but it also severs our generic expectations, slicing through them seamlessly as skin, or silk.

During the opening credits, Campion crafts a dreamscape that nods to Classical Hollywood cinema, modernizing it with a gauzy haze of millennial New York City fecundity. A woman coos “Que Sera, Sera,” a song Doris Day canonized in Hitchcock’s The Man Who Knew Too Much. Blossoms billow, the edges of the frame slightly smudged as if by lipstick or tears. A woman, Pauline (Jennifer Jason Leigh), lifts her chin to greet the breeze that brings these blossoms down. Campion crosscuts between Pauline in the garden and black-and-white footage of a couple ice skating in a pastoral location. A particularly severe turn on the ice slices the title of the film into the frame. Beauty and violence, the girl and the gun: this is the stuff of which cinema is made.

In the Cut’s hard-boiled detective is not our protagonist; we’ll get to him later. Frannie Avery (Meg Ryan) is this story’s center, an English teacher who collects fragments of poetry not as a hobby, but out of pure passion. She’s opaque, but observant. She savors her surroundings; like wine, holding the sensation in your mouth is the best part, seconded only by the swallow. In these ways, she’s like a hard-boiled detective character: collecting clues. They might not make sense immediately, but build up value and meaning through the accrual of time.

At the beginning of the film, Frannie is meeting with Cornelius, her student, at a bar for a tutorial; she pockets his slang in ways that feel exploitative but earnest, penciling his colloquialisms into a notebook for her own edification. It’s an innocuous encounter that feels narratively unnecessary—and yet, this afternoon at the bar sparks an encounter that will throw Frannie’s life off its axis. Unlike ’40s noir, this bar isn’t cloaked in chiaroscuro. The honeyed light pulses: tumescent, pillowing. Frannie and Cornelius’ relationship is loose and loquacious; Cornelius accuses her of treating him like a lab rat, and Frannie gives him a hard time for not handing in his homework.

Frannie finally has to pee, and goes in search of the bathroom. The noir atmosphere really rears its head here: in the basement, under the light of a lone bulb, Frannie stumbles upon a man receiving a blowjob from a woman with long blue fingernails. His face is ensconced in shadows but his tattoo, a heart on his wrist, flashes into view when he grips the woman’s hair and pulls. Instead of retreating, Frannie watches with blunt curiosity. She’s startled, but the surprise dulls as she settles into her voyeuristic position, noting the small details: the tug on his cigarette, the low grunt to signal his finish.

The next day, Detective Malloy (Mark Ruffalo) stops Frannie outside her apartment. The woman with the blue fingernails has been disarticulated, a piece of her body found in the garden outside Frannie’s apartment. She’s dead.

Clues litter the narrative like petals. Themes central to the film’s larger concerns—how pain and pleasure encase one another like concentric circles—flicker into view. Campion embeds these themes in every layer of the diegesis. As Frannie teaches Virginia Woolf’s To the Lighthouse, one male student exasperatedly exclaims, “Nothing happens! One old lady dies.” “How many ladies have to die to make it good?” Frannie retorts. “At least three,” another male student jokes. It’s early in the film, so it seems like nothing more than adolescent banter, but the need for three women to die will propel the film’s structure forward.

Later, when Detective Malloy enters Frannie’s apartment to question her, he reads aloud a fragment of poetry tacked to her wall. “I want to do with you what spring does with the cherry trees.” It’s the ending to Pablo Neruda’s poem “Every Day You Play,” number 14 of Twenty Love Poems and a Song of Despair. The poem’s sexy imagery (The rain takes off her clothes may be one of the most erotic lines of poetry I’ve ever read) lends itself nicely to the sultry exchanges between Frannie and Malloy, but the entire poem is worth a closer reading in the context of the film’s arc. Delving into the fourth stanza, it develops a darker hue:

The birds go by, fleeing.
The wind. The wind.
I can contend only against the power of men.
The storm whirls dark leaves
and turns loose all the boats that were moored last
night to the sky.

You are here. Oh, you do not run away.
You will answer me to the last cry.
Cling to me as though you were frightened.
Even so, at one time a strange shadow ran through
your eyes.

The first three lines of the fourth stanza are abrupt, fragmented. The repetition of “the wind. The wind” seems to amass some urgency, like a warning. Then the stanza opens up as “the storm whirls dark leaves / and turns loose all the boats;” no longer are the lines closed and contained. The storm shakes loose the boundaries of the line with its alliteration (the lilting “Ls”) and its lack of punctuation. Even gravity is unsettled as the unmoored boats float “to the sky.” The narrator regains a measured control of tone (and the period) when he commands, “Cling to me as though you were frightened” and when he professes at the end “I want / to do with you what spring does with the cherry / trees.”

Though the invocation of spring suggests new life, delicate and pink, spring winds ultimately shake cherry trees like “the storm [who] whirl[ed] dark leaves.” In In the Cut, there’s no stark dichotomy between love and lust, violence and pleasure, Eros and Thanatos. Malloy initially comes off as an arrogant asshole, brusque, with a heavy New Jersey accent. But as he and Frannie develop a relationship it’s equally unclear if he’s rapacious or romantic—quite possibly he’s both. On their first date, he allows that he can be whatever she wants him to be. “The only thing I won’t do is beat you up,” he assures.

Much has been made about the sexual content of In the Cut, not the least of which is Meg Ryan’s full-frontal nudity and the explicit sex scenes between her and Mark Ruffalo. What’s missing from these reactionary responses to full-frontal nudity is that Campion cinematically captures what good sex looks like and feels like for women. While Malloy’s partner dismisses Frannie at the bar with the damning question “what are you, some kind of feminist?,” Campion wields the upper hand by showing her audience consensual sex predicated on female pleasure—and not cutting away. Frannie is a feminist and so is In the Cut’s frank attitude toward the primacy of her pleasure. In Frannie and Malloy’s copulation, condoms are totally normalized, as is Malloy eating her out from behind. And Frannie liking good sex doesn’t make her the femme fatale or the whore.

For so many women, we’re still not used to seeing female characters onscreen receive pleasure for pleasure’s sake. Sex often gets wielded like a weapon. For Kathie Moffat in Out of the Past, sex is a key form of manipulation to get what (and murder who) she wants. For Brigid O’Shaughnessy in The Maltese Falcon, sex is a mere stepping-ladder in her struggle for power over her male co-conspirators. For Evelyn Cross Mulwray in Chinatown, sex can never be fully separate from her memories of her father’s rape and sexual abuse of her as a child. In the Cut is tangentially about a serial killer who beheads his female victims, but all the violence occurs offscreen. We see the bloody aftermath, but ecstasy (and women’s interiority) accrues the most screen-time.

Additionally, many of us are not used to seeing female characters onscreen whose passions are plural; more accustomed are we to women relegated to the role of the girlfriend, the wife, the sister, the mother, his girl Friday, his femme fatale. Frannie’s vocation is not her only interest, nor does her relationship to Malloy render her more fully dimensional. She’s a dedicated sister, a connoisseur of colloquialisms and good poetry, a self-actualized woman with a healthy libido. I don’t want to be Frannie because I already am her to varying degrees. The identification with this woman is not hero-worship, but quotidian recognition. When Frannie sits with her sister Pauline in a cafe, Pauline remarks that she only remembers guys she’s slept with by how they wanted to do it. She laughs wondering if she’ll ever have the gall to call the shots when it comes to fucking on her own terms first. Frannie laughs with her, but we’ve already seen Frannie negotiate sex in a way that is safe, satisfying, and incredibly intimate.

These exchanges, conversational or sexual, still strike me as topical in 2019. Pauline sets her sight only on sex and men. She recalls the eponymous “woman” from Jia Tolentino’s Trick Mirror, “When you are a woman, the things you like get used against you. Or, alternatively, the things that get used against you have all been prefigured as things you should like. Sexual availability falls into this category. So does basic kindness, and generosity. Wanting to look good—taking pleasure in trying to look good—does, too.” Leigh’s character does have her good looks and her flirtations used against her. She, like the woman with the blue fingernails, is disarticulated in the end. It’s a term unknown to Frannie (and initially this writer), but it’s a term with two meanings: disrupting the logic of an argument and separating bones at the joint.

In a film where words mean everything to our protagonist, “disarticulate” strikes me as particularly cruel. Upsetting the logic of these women’s reason and silencing them through the slicing of their throats: both meanings are ubiquitous and unremarkable when applied to women. This gendered, sexual violence is so routine in our news cycle that it’s almost banal. When Malloy first drives Frannie to her sister’s Campion cuts to a woman in a red dress frantically running down the street. The inclusion of this image, a glimpse of a woman in duress, underscores women’s perpetual danger. We don’t need to focus on it too much because it’s fleeting and recurring. The radicalness of In the Cut is to focus on Frannie in all her permutations, the intensely ordinary and the exceptionally extraordinary. Thus, it dresses itself up as a neo-noir about a woman who “can contend only against the power of men.” But it’s a film that’s more than meets the eye, or the genre. In “Every Day You Play,” Neruda plainly states: “You are here.” So Frannie is for us. Like the blood-red cherry tree in spring she blossoms, blossoms and quakes.