No Special Feeling: The Doomed Love Story of California Split 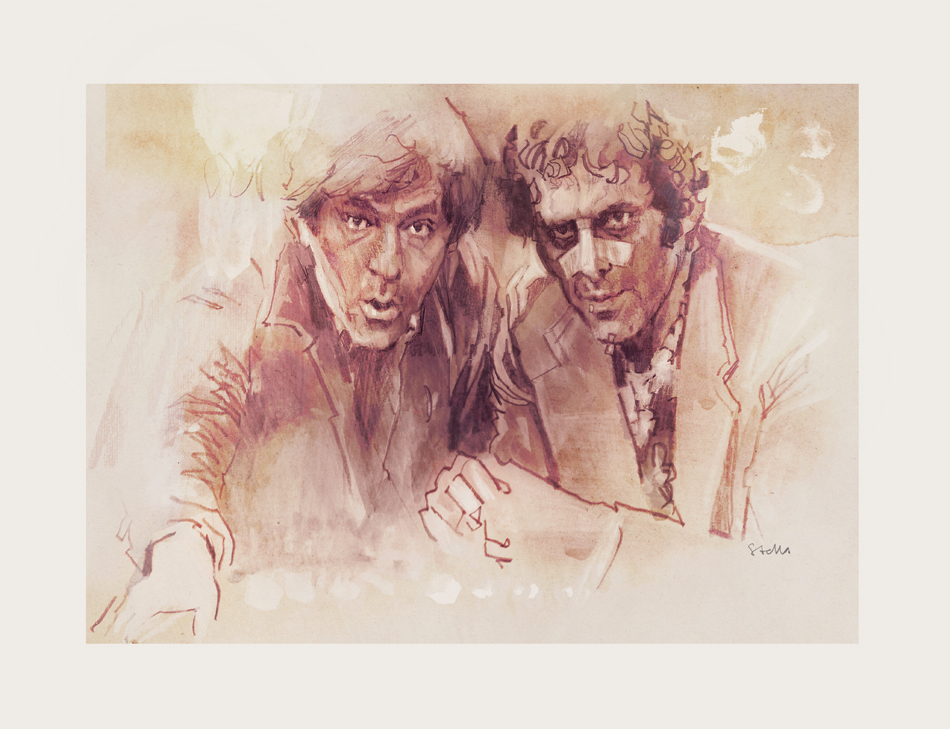 “These two are workin’ partners together,” Lew accuses, sweaty, pinned back by security. “They’ve been grinnin’ and smilin’ at each other all night.” He’s seen something in the total strangers, their playful glances tossed across the poker table, smirks dealt like wild jokers, that they haven’t yet seen themselves: a connection; a camaraderie; a partnership. Bill Denny (George Segal) is under the table, scooping up chips, and Charlie Waters (Elliott Gould) is talking his way out of—and back into—trouble, both focused on saving their own skins. It hasn’t occurred to them yet to look out for anyone other than themselves.

Robert Altman’s California Split is a love story disguised as a gambling movie. The semi-autobiographical script from Joseph Walsh recalls the torrid days he spent rooming with Elliott Gould, though in the film, Gould portrays not himself, but Walsh, with reckless zeal, as Charlie. Meanwhile, Segal plays Bill, based on Gould’s own reluctant embroilment. After a tumultuous initial encounter, the two gamblers reconnect at a local bar by happenstance. A dozen empty glasses and some signature Altman-approved improvised dialogue later, the men are infatuated—not simply with each other, but who they become around each other: witty and warm. Lew, the slighted card player from before, attempts petty revenge, ransacking the men in the parking lot of the bar, but the mugging only strengthens the fresh bond between the two. Back safe but bruised at his place, Charlie rubs shaving cream onto first his, then his new friend’s wounds. It’s a little trick he’s picked up, although, Bill might wonder, who would need to pick up such a trick? What kind of man can take beatings with such equanimity? But it feels good on his skin, so it seems the trick has worked, and thus Bill is taught to follow in Charlie’s footsteps.

He hardly makes it a few hours out of the house, not even into a change of clothes, before he’s bunking off work to meet Charlie again, this time down at the racetracks. Explicit is the hunger for the next big win, an addict greedy for a fix. Implicit is the intoxication of being around his new pal, the infectious momentum of being pulled into schemes and shenanigans. Charlie scores big, often, but he’s prepared to lose, too. It’s about the thrill of the chase, the journey rather than the destination.

The title of the film derives from the California high/low split game, wherein the pot is shared equally between the players with the highest and lowest hands. From that night on, their friendship is that even split. Bill and Charlie share the pot when they win, and share the comfort when they lose. They share the highs, the lows, the delusion, the hope. Folie à deux, a shared madness. A spree, hand in hand. This is the real gamble at the heart of California Split: the risk you take when you put your care and trust into another person. A betting man might not like the odds on these two; they’re sloppy, they’re shortsighted, they can’t even rely on themselves. They bring out the most joyfulness in each other, but encourage the worst choices. Walsh, discussing his conception of the two characters, claims that the difference between them is in the motivation; Charlie is a man who gambles as a lifestyle choice, like a shark in perpetual motion, but Bill gambles because deep down, something is missing. For Charlie, meeting Bill is a rush. He’s found someone who will indulge his whims, accept him for who he is. For Bill, Charlie is the thing that’s been missing.

There’s a confidence in the charm of Gould’s performance in particular that sells the friendship. Always talking, always moving, bamboozling bettors, pleading with cashiers, negotiating with muggers. Even laid out with a broken nose he’s quipping and bombastic. Segal plays the straight man who always seems moments from breaking, and some of the most shining moments are when they meet each other on that level, like in a Segal-improvised riff about the seven dwarves. There are echoes of M*A*S*H—grown men in over their heads, clinging to the bonds of fraternity. But in M*A*S*H, our protagonists are unwilling victims, drafted into conscription. In California Split, Charlie and Bill have enlisted themselves into this vicious cycle.

Though Bill only seems to have eyes for Charlie, their company is fleshed out by a happy, bizarre, little family. The film lives on the fringes of society, but succeeds in part because it never indulges in judgement of its characters. Charlie’s only friends other than Bill seem to be his roommates, Barbara (Ann Prentiss) and Susan (Gwen Welles, who collaborated again with Altman the following year on Nashville), two sex workers he treats as bosom buddies. The audience is extended the privilege of this friendship, too; it’s rare to see sex workers in scenes of such uninhibited domesticity, stringing up Christmas lights or reading the TV guide to fall asleep. There’s something refreshingly wholesome in the quartet, the way they are candid and affectionate with each other. It’s so at odds with the familiar tropes of the degenerate gambler—selfish, shifty, careless or cruel to women—that we can almost believe it will last forever. But the house always wins.

Charlie flits off to Mexico on one of his whims and Bill is a wreck, as if Charlie has taken their rose-colored glasses and left him without. Abandoned, he slips, and debts beget debts as he stumbles out of back room poker games with empty pockets and tired eyes squinting down the sun-soaked streets. He’s aimless, he’s broken-hearted, unable to sustain his mad, fervent hopes now that the little voice has ceased whispering in his ear. Either because of, or possibly despite, all this, he has become increasingly desperate. They fight for the first time when Charlie returns, about the money and the games, but really, about neither. “I know how I feel!” Bill yells, “I know how I feel!” The ever garrulous Charlie is speechless, brow furrowed, gulping at his beer. It’s the first and only time we see a glimmer of a guilty conscience in him.

California Split is bittersweet; it’s doom cloaked in joy. When they head to Reno as partners, Bill the player, Charlie the investor, all in on the big game, we have no doubt in our minds they’ll lose. We can only hope they’ll at least do it hand in hand. But some part of the magic between them, some part of the shared madness, has been lost. Bill banishes Charlie from the poker table; he’s a distraction. As Charlie is sent to wander broke and bored through the liminal space of the casino floor, as his hunched back leaves the room forlorn, a lounge singer croons: “You’re nobody ’til somebody loves you; you’re nobody ’til somebody cares.”

Real life pianist and lounge singer Phyllis Shotwell, who soundtracked the latter half of the film, adds a jazzy infusion to the tune made famous by Dean Martin. At first glance, the sentimental ballad is out of place on a soundtrack full of explicit narrative parallels like “Camptown Races” and “Ace in the Hole”—songs whose lyrics reference gambling clearly. The soundtrack itself is infamous; the rights to the music were expensive and legally complex, causing such feuds and threats of cut scenes between Altman and the production company that, as Lily Tomlin claimed in Robert Altman’s Soundtracks: Film, Music, and Sound from M*A*S*H to A Prairie Home Companion, led to Altman punching a Columbia executive in the face. Because of this, California Split was inaccessible for years until an eventual DVD release in 2004—and even then, only on the condition that the home release was stripped for parts. Three minutes of the film were cut and several songs were replaced, including “You’re Nobody ’til Somebody Loves You.” With the original cut of the film only just now finally seeing a proper re-release, suddenly the story makes a little more sense.

The song speaks directly to the film’s thesis: Bill and Charlie, empty and drifting, nobodies until somebody loves them. When we hear this song, there’s thousands of dollars at stake; Bill’s future on the table in 52 cards, but like a portent, Phyllis sings, “You may be king, you may possess the world and its gold; but gold won’t bring you happiness when you’re growing old.” And then, it seems for a moment that our expectations are subverted. Bill has won, keeps winning, pulls Charlie close to him, keeps winning still, and finishes on top. Tens of thousands of dollars richer, even split between the partners, and we’ve got our happy ending until we walk away from the table. But Bill is shaking the chips out of his pockets, disgusted, like he can’t stand the sight of money. While Charlie is ebullient, already planning their next big adventure, Bill stares empty, vacant into the distance, a moment of silent truth. “Charlie,” he confesses, “there was no special feeling.” It wasn’t enough and he knows now it would never be enough. He says goodbye and walks away. Not just from the game, but from Charlie, from the inevitability of the two star-crossed souls blurring together into one cursed, hopeless, inescapable fate.

Alone with his share of the winnings, Charlie mumbles a tune to himself. “Nothing about me is gonna be the same.” But, of course, it is.

Finding a soulmate feels like finding a piece of yourself in another person. But that’s part of the gamble too, because what if the piece of you that you find in them is the thing you hate in yourself? When do you decide to walk away? When you realize that dark, rotten pit is still there, deep inside, and one hot streak, one big win, one laugh, one friend, will never be enough to fill it? When you realize that the old song was wrong—somebody loved you, and you still feel like a nobody? How long can you bluff when you don’t have the cards?

“The world still is the same,” Phyllis sings, “you’ll never change it.” If you’re lucky, no one calls. You keep bluffing until the day you choose to fold, lay your hand down and walk away, walk out the door and into the blinding hot California sun rising bright in your eyes, last night long gone now, like so many nights before it. Shield your eyes and keep walking into the light and begin a new day.