Queer Nihilist Opera for The Last Days of Capitalism 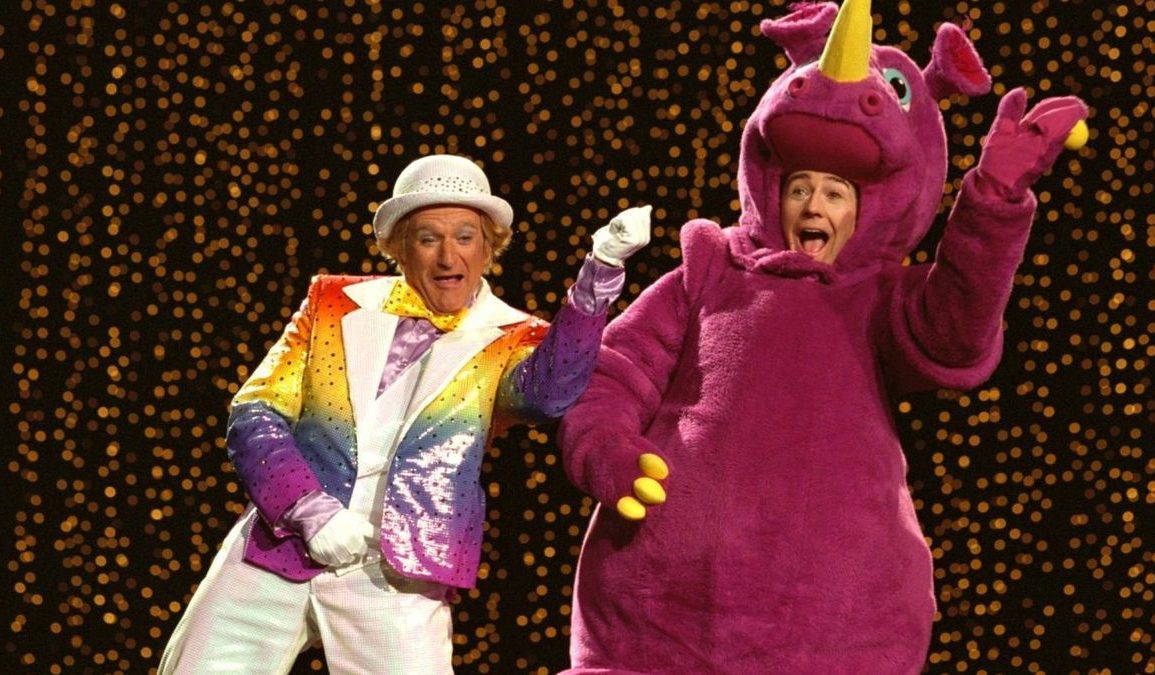 In the climactic final encounter of Death to Smoochy, Rainbow Randolph (Robin Williams) wrestles a sniper rifle away from an assassin in the scaffolding above an ice show. Below, his former rival, a pink rhinoceros named Smoochy (Edward Norton), skates through an operatic rendition of his troubled career in show business. As the cops separate Randolph from the killer, they ask if he’s ok. “Well, I’m kind of fucked up in general,” Randolph admits, “so it’s kind of hard to gauge.” It’s a sentiment so unhinged as to play for comedy, but it also strikes a nerve of relevancy. These are unhinged times. Death to Smoochy is ham-handed, oversaturated, overly long, and lacking in thematic focus. When it premiered it failed spectacularly, finding no purchase with viewers looking for an easy escape from the antebellum early aughts. But a film whose excesses lacked an audience in 2002 just may have found its spiritual home 18 years later.

Death to Smoochy pits two clownish buffoons against one another. The film begins with the fall of Rainbow Randolph when he is arrested for racketeering, ending his career and ruining his public image. Enter his replacement, Smoochy, chosen by network execs for his squeaky-clean background and almost unnerving commitment to ethics. Smoochy—and his human counterpart, Sheldon Mopes—is sickeningly sweet and optimistic, a man of such uncompromising moral integrity and hope for humanity that it inspires rage in his colleagues. Rainbow Randolph is the wolf in sheep’s clothing, a nihilist in a harlequin suit, the embodiment of greed, so desperate for fame and power that he comes undone.

Despite Mopes’ superficial rejection of corporatism, both he and Randolph are pawns of the system that puts their names on soda cans and cereal boxes. Randolph embraced the siren song of marketing and thrived on the capitalist manna of network television. Mopes is more hesitant. He objects to peddling cookies to kids, to cheap plastic toys and refined sugar. He refuses traditional vendors at his ice show, providing concessions for free and donating the profits to charity. But Mopes is still a mercenary of capitalism, only blinded by his own brand of liberal ethics. He fully buys into the market of “health food,” where gluten is bad, soy is good, and diet culture warns women against empty calories. His concessions might be organic and vegetarian, but he still serves them to children out of packaging bearing his face. He still has an agenda that, however well-meaning, is false.

Mopes, in his attempt to subvert the oligarchic hand of capital, has created a brand. Like so many clowns before him, Smoochy is another face of the free market. The purple rhinoceros pushes health food just as aggressively as other mascots peddle their processed foodstuffs in brightly colored wrappers. In his naivety, Mopes is a perfect soldier. He sells to his own demographic, to people who are sick of being sold to, who will fall for the idea of ethical consumerism if it wears a different, kinder face. Mopes pockets the profits of his creation either obliviously or uncritically. He never acknowledges that his newfound abundance is not a reward for the morality tales he sings on primetime, but the direct result of consumerism. To him, the proliferation of his brand is a genuine moral victory. Every soy dog makes a difference.

Jaded network executive Nora Wells (Catherine Keener) is hardened to what Mopes sees as the most important part of working in children’s TV: children. Alongside network president Stokes (Jon Stewart in a rare acting role), she’s mainly concerned with avoiding another scandal while marketing Smoochy action figures to kids. Throughout the film, we see Nora’s façade break down as she realizes that Smoochy isn’t just another inauthentic actor peddling morality for a buck. She admits to him that “sincerity is an easy disguise in this business.” An easy interpretation is that in learning to love Mopes, Nora is shedding her corporate identity for one of compassion. But in reality, she is simply donning a new face. She might have found inspiration to create more wholesome programming, but she’s still taking meetings with product development. It’s not that Nora and Mopes are not sincere in the end, but that they fail to actually depart from the capitalist system in any meaningful way. Is true sincerity ever possible in a 6:00 p.m. sponsored timeslot on KidNet?

Through their attempts to foil one another, we see Randall and Mopes subserve to the throne of capitalism with an almost sexual devotion. Early in their rivalry, Randall tries to subvert Smoochy’s show by undermining the Cookie Lookie Time segment. Smoochy gathers the children around as the lights dim. A heavenly spotlight follows the rhinoceros’ outstretched hands towards a sack of cookies slowly descending from the ceiling. Strauss’ Also sprach Zathura pounds as the bag approaches Smoochy’s waiting arms. The lights rise as Smoochy, bag in hand, leads the kids in a chant about the healthy treats it contains—“sweetened with juice for an energy boost!”

Randall rolls his eyes in the rafters. “Whatever that means, you fucking peasant.” He’s replaced the usual baked goods with his own invention backstage: the cookies, it is revealed, are shaped like dicks. Smoochy improvises in a panic—it’s a rocket ship! The kids buy it, but Randall isn’t having it. He bursts from his hiding place onto the stage. “What are you, blind?” he screams. “It’s a cock!”

Beyond its more subliminal fellating of the free market, Death to Smoochy is awash with queerness. Some subtext is obvious: in a largely unnecessary but arguably entertaining turn as a mobster, Harvey Fierstein orders a hit on Smoochy that goes awry when his goons shoot the wrong rhinoceros. “Smoochy is fuschia! Moochy is burgundy! Read a paper!” he spits. For the most part, however, Death to Smoochy is flamboyant with a distinctly homophobic overtone. It leaps back from its queer subtext at most opportunities, lest it be read as explicitly gay. Many of its more homoerotic moments or discussions of gayness are posited as jokes, rather than instances of sincerity or pride. After tricking Mopes into a photo at a Nazi rally (back to that later), Randolph attempts to further discredit Mopes to Nora by suggesting that he’s probably gay. “It’s a vibe…kind of a homosexual nazi vibe,” he says as he pantomimes a limp-wristed heil.

Rainbow Randolph’s personality often embodies the sexual, neurotic energy that Robin Williams weaves into many of his clowns. Randolph is a role akin to drag as he dances in white sequined taps and a glittering rainbow coat, eyes glazed with blue shadow, singing that friends come in all sizes. In the end, when Randolph and Mopes reconcile, Randolph tells Mopes that he feels like he’s “nothing.” Mopes comforts him: “You’re not nothing, alright? You’re bitter and misguided, and I’m guessing you’ve got some serious issues with sexual identity…” Randolph nods in defeat. It’s the closest Smoochy comes to an acknowledgement of its characters’ queerness. Randolph is softened by this admission, and his relationship with Mopes and his own demons are healed in a moment that feels genuinely cathartic. While Mopes’ dig is meant as a joke, the look of penitence on Randolph’s face doesn’t play for laughs. His expression implies what the film cannot say explicitly: that his journey to find his identity has been confusing, painful, and publicly humiliating. He is ready now to embrace who he is, whoever that may be.

It’s easy to assign an identity label to Randolph. More nebulously, if Mopes is queer, it comes through in his experience and portrayal of gender. One could look at his embodiment of Smoochy as his gender presentation. The suit he wears both is and is not him, just as gender, for some, balances on a thin edge between feeling and perception. There is a euphoria in his relationship with Nora. Mopes as a man is nearly asexual in his innocence, but he catches Nora’s eye; she has a history of loving costumed kid-show-hosts. Maybe she’s a bit of a chaser. As she observes Smoochy, this man in between rhinoceros and Bush-era hippie, she fixates on his body like that of the satyr: bare chest and fluffy fuschia legs. When she kisses him he eagerly reciprocates. She lays him down behind a red gauze partition, where we watch in silhouette as she removes his oversized feet one at a time. It’s reminiscent of the scene in Rocky Horror Picture Show where Frank-N-Furter seduces Brad behind a curtain by posing as his fiancée Janet. The ruse is quickly revealed and Brad panics: “I thought it was the real thing.” But he does as Frank suggests and gives himself over to pleasure. Nora’s approach to Smoochy is more consensual. There is a joyous release in his undressing, an understanding that presentation belongs to the perceived, even when you strip away the trappings of society.

Roger Ebert panned Smoochy in his 2002 review. One of his main criticisms is of the plotline where Randolph attempts to slander Smoochy by tricking him into performing at a neo-Nazi rally. When the house lights go up and the 20-foot-tall swastika unfurls behind Smoochy, he realizes he’s been had. Ebert wrote, “One wonders idly: Are there enough neo-Nazis to fill a thundering convention center?” What was unimaginable then seems almost mundane in 2020. Of course you can fill a stadium with white supremacists. In 2002, America was fresh from the trauma of 9/11, sensitive, eager for revenge. Fear fed into xenophobia, which fed a nationalism that gave many white Americans a sense of pride and hope; the belief that their country was strong, or stronger-than, triumphant in the face of adversity. Today, many people have become numb to trauma, finding themselves nihilistic or anarchic in response to the constant lashings of tragedy. Others feel an acute depression unlike anything they’ve felt before.

At his lowest point, Rainbow Randolph covers himself in gasoline in the middle of Times Square and lights a match. He sings his torch song: “I can no longer live in a world where the innocent suffer and the wicked thrive.” It’s all melodrama, but it cuts deeper today than it might have to an audience bonded to their concept of a new American dream. A little girl steps out of the crowd surrounding Randolph and blows out his match, telling him it’ll be ok. A flicker of hope darts across his broken face. But then the crowd spots Smoochy and rushes to him, leaving Randolph alone and soaked in gasoline; dripping with the ruins of his sanity. He screams up into the sky: “Oh God! What does it all mean?”

The modern world offers no answers to Randolph’s question, no easy explanations. If there is any quantifiable approach to meaning, it probably does not involve soy hot dogs or self-immolation. The answer probably will not come to us on network television or on the back of a cereal box. Most of us will not achieve enlightenment about our gender or sexual identity by taking off a rhino suit or stepping into rainbow coattails. What we do know is that as we traverse this era of postmodern capitalism, where the surreal and absurd are increasingly a part of our daily experience, we can look to the past and see that all of our questions have been asked before. What once made Death to Smoochy inexplicable and unpalatable is what now makes it a poignant scream into the void. Our gauge for trauma is broken; we’re all pretty fucked up right now. Of course, there are alternatives to apathy: protest, reform, revolution. But if you find yourself yelling alone at a God who is not answering, know that you are joined in that scream by a fictional, disgraced, closeted children’s television host hellbent on destroying a pink rhinoceros.