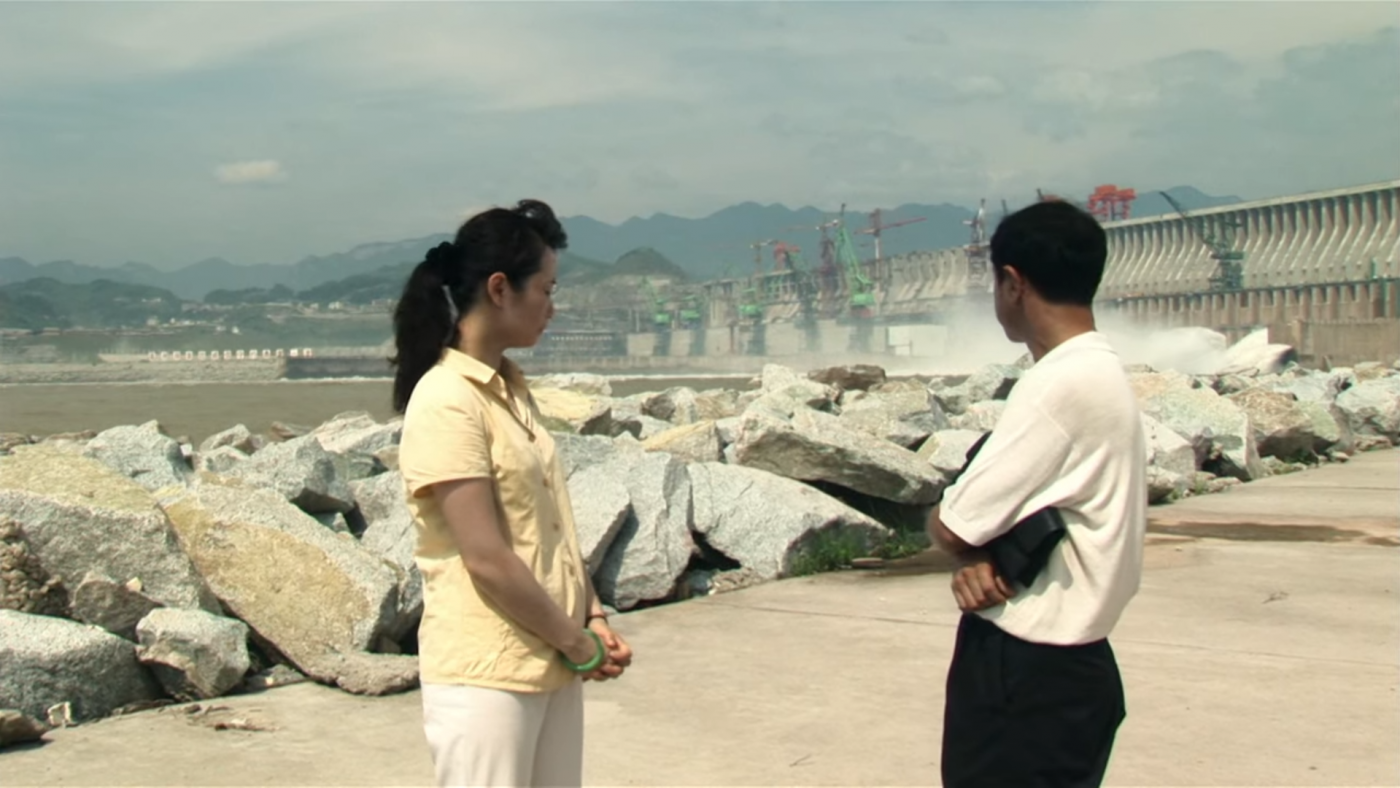 There is a lot of waiting in Still Life. The film is set in Fengjie, a village waiting to be flooded during the upcoming phase of the Three Gorges Dam’s construction. The main characters are also waiting, having come to the village in search of long-lost lovers, following years-old leads down roads that have already been flooded by the dam’s development. Jia Zhangke and his cinematographer Yu Lik-wai, too, make their audience wait, as the camera lingers on long shots of the river, the city, and its people. Throughout the film, the impending flood waits at the edges, treading a fine balance of destruction and development. We see a world hewing to the dual inevitabilities of disaster and growth. Waiting, in essence, shapes what we know.

All this waiting leads to the expectation of happening. Happening can be inevitable, or it can be unexpected—it is inevitable that the dam is going to be built and that flood will happen; what is unexpected and unknown are results of the main characters’ respective searches for their lost spouses. If the process of waiting shapes what we know, then perhaps the uncertainty of happening—what we are waiting for—shapes how we wait. In Still Life, characters and their relationships are caught in parallel tracks of waiting and happening, framed by the enormous potential energy held by the dam. Under the cover of the flood, waiting and happening both intersect and occur cyclically, trapping everyone around the flood area in the passing of time.

Surprisingly, the Three Gorges Dam itself, omnipresent through the film, source of all waiting, is only shown once in all its crisp high-definition glory. Shen Hong, one of the film’s protagonists, has come to Fengjie from Shanxi in search of her husband Guo Bin, who left two years ago in pursuit of dam-related business opportunities. Shen Hong spends an entire day in various parts of Fengjie searching for the man she affectionately calls Binbin. During this search, Shen Hong learns that the phone number she has for Guo Bin is an old one. Shen Hong’s only connection in Fengjie tells her he hasn’t seen Guo Bin in a year. She bandages up one of the boys working for Guo Bin after a bloody fight, and she concludes from all these interactions that he is probably having an affair. Shen Hong’s day-long search is an extended sequence of happenings; by the end, she has realized that while she spent years waiting for Guo Bin, his life was happening anyway.

But the ending we are being set up for doesn’t happen until the Guo Bin shows up the morning after. Finally, the wait is over, but she refuses to talk to him, walking away while he follows in his car. He follows her to the riverbank, where they finally stop. He offers a hand, pulls her into an embrace, and comforts her, before they begin to slow dance down the path.

There is waiting, and then there is happening. Shen Hong and Guo Bin are dancing, and then they are not. Shen Hong has been searching for her husband for two years, and then she is not. Shen Hong is supposed to be lovelorn, instead it emerges that she is in love with another man and wants a divorce. The unexpectedness of the happening should feel like a rug pulled out from under the viewer, but after all the waiting, it feels natural that things must happen like that. The former lovers stand apart. There is no more love to be had. After two years of waiting, they take the stance of strangers. The waiting is over, and everything is still.

For a while, my go-to stay-home meditation was putting a Distance Noguchi video on while working alone in the quiet late of night. The project, a series of fixed-camera films of The Noguchi Museum’s sculptures, attempted to replicate the feeling of viewing the sculptures in person, documenting changes in light, shadows of the trees outside, and background noise, over periods of anywhere from one to eleven hours. When I first found the videos, I scrolled quickly through them, jumping through hours of footage, waiting to see if anything startling would happen. Of course, nothing did. The whole premise of the project was to capture the experience of time passing. In a time of deep malaise, I found this unsatisfying. I wanted to skip to an ending, but there was no such moment. Nothing happens in these videos—time passes, is all, and everything is still.

Later on, I’d pick a video and keep it minimized in a corner of my screen, letting myself write while accompanied by the ambient noise. I didn’t really watch, but every now and then I’d look, and there would be a change in the lighting I hadn’t noticed before, more imperceptible than when I tried to force it. Every now and then, there would be louder noises—birds chirping, cars honking. Slowly, in the endless days of being home, with a job I could do at any hour of the day, these videos started to feel like a balm. I stopped waiting for anything to happen, and I started just looking. Like this, the waiting itself became the happening.

For much of Still Life, the Yangtze River is portrayed laying at the base of lush greenery, the eponymous Three Gorges. Fengjie lies above the river, allowing audiences and characters to gaze down at the water that is soon to flood the city. During Shen Hong and Guo Bin’s détente, however, they stand at the level of the water, the banks of the river in their background. Jia uses a medium shot that allows Shen Hong and Guo Bin to be emphasized as much as the dam and river behind them, drawing the dam directly into the conversation after being the cause of the couple’s strife. From this view, the surrounding nature doesn’t look quite as impressive. Rather, on the opposite side of the river, the infrastructure of hydroelectric power is visible, obscuring the natural features of the surrounding area and allowing the greenery to fade into the background. The dam has already changed the landscape permanently, even before the coming flood. Maybe, then, the drawn-out process of the dam’s construction eases the weight of waiting for the flood. The contrast between natural and industrial is no longer immediately antagonistic. Yes, the disaster everyone is waiting for will happen, but it has already been happening for years.

The dulling of disaster—the happening of waiting—seeps into Shen Hong and Guo Bin’s relationship, which has disintegrated since he left to work on the dam. With the characters at the level of the river, Shen Hong’s bright yellow blouse, which she has worn the entire time in her search for Guo Bin, looks muted. In the daylight, the yellow of her blouse pales, and almost matches the rocks or the concrete dam. Suddenly, she could blend in with the dam or the rocks at the edge of the river. Instead of standing out as an out-of-towner trying to resolve unfinished business in Fengjie, Shen Hong is in this moment as much a part of the environment as all the businessmen and workers preparing Fengjie for its flooding. Her revelation, which should be a surprise, instead feels natural. After all, she has also been irrevocably changed by the emergence of the dam.

Now, after Shen Hong has declared her desire for a divorce, Guo Bin can barely look at her. She can barely look at him. They stand far apart enough that casual touching is no longer an option. She looks down and away; he looks at the dam. This is not a stare as much as it is a furtive glance. Guo Bin looks toward the only thing he is familiar with now—the dam—so that he does not have to look at his wife. He is a man who, unlike the rest of Fengjie, does not have to await the flood in dread. He came to Fengjie in pursuit of opportunity, and in the process made everyone in his life wait for his return and for his success. For Guo Bin, nothing is destroyed while he waits. The flood will happen, and life will keep happening.

So perhaps it is apt that Guo Bin and Shen Hong are not standing at a site that is to be flooded. The side of the dam that comes into view faces downstream, and the couple stands on the other side of where the flood is to happen. When Guo Bin looks at the dam, he is not thinking about the flood, because he does not have to. Up until this point, the development of the dam has only served to benefit him, blessing him with business opportunities and women who are interested in him. He is now confronted with the reality that while he made Shen Hong wait for his return, her own life was happening.

The gaze he casts upon the dam is heavy with this realization. In this moment, the dam makes itself known. Before the flood, the dam lies dormant, the soon-to-be reservoir not yet able to produce any energy of its own. It is suspended in the limbo of waiting, seemingly purposeless, not yet capable of making things happen. After the flood, the dam will fulfill the purpose of all its waiting, generating power in a continuous happening. But in the wait—in the process of destroying buildings to make electricity happen—things are happening anyway. Guo Bin and Shen Hong, then, represent the two categories of people affected by the impending flood—those who are waiting for the happening, and those for whom the waiting is the happening. They stand apart, because neither can know how the other might see the dam and the time that passes with its construction.

Still Life is filled with shots framed by windows, balconies, and half demolished buildings. Throughout the film, we see Fengjie and the Three Gorges on television, through buildings that are shells of themselves, from above, in pictures, and even on a banknote. Here is a frame where the village is absent and the dam is on the characters’ level. It does not need to be passed through another frame. We do not need to be reminded of what is to come, only what has happened. The flood looms throughout the movie, but the characters here, standing downstream, are free from worry. Shen Hong will leave to be with her new lover. Guo Bin will return to his thriving business. Whatever may happen in the next phase of this dam’s construction has already started happening, and both Shen Hong and Guo Bin are no longer waiting.

The Distance Noguchi videos end, of course. The shorter videos sometimes come to an abrupt pause in the middle of my work, all ambient noise fading to a hard stop. My waiting is over, nothing and everything has happened. If I have gained anything from my hours of occasionally glancing at Distance Noguchi, it is the balance of thinking of every moment of time as simultaneously insignificant and invaluable.

Watching Still Life with this new perspective, I forced myself to look at every long take, to think about the passing of each period of time within and outside of the film. I saw the dam in the background of Shen Hong and Guo Bin’s conversation, the enormity of all the energy it held, the time that had already passed in its construction, the time that was to pass with the flood, and I saw the happening that was their conversation. By the end of that conversation, with the couple standing apart on the pier, the dam itself, source of all waiting, had become simultaneously insignificant and invaluable.