In The Infinite Glow 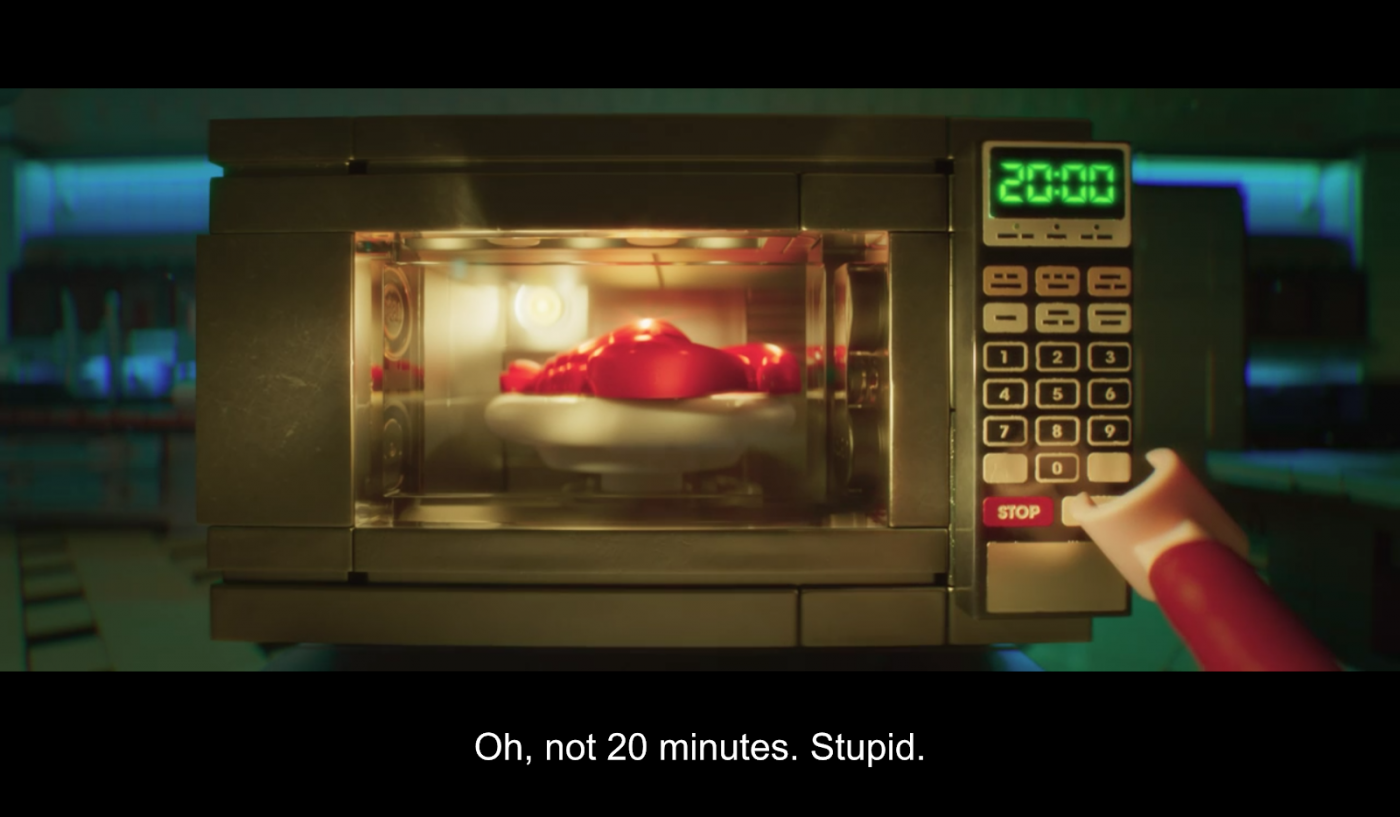 I hate it when essays about films start with “I saw this movie during blah blah year at blah blah theater,” but forgive me, as I am already entrenched in many things I hate, when I start with the following:

I saw The LEGO™ Batman Movie in Tulsa, Oklahoma with my brother. I begin the essay with this fact because when I’ve pressed my brother for corroboration of this event, he has no recollection that it ever happened. Here is what we do agree on:

That’s not to say I don’t forget things too. I forget things all the time: I keep forgetting to buy ground coffee. (“Oh, are you a tea person now?” a friend asks. No, I am a stupid person.) But generally speaking, I have an absorbent brain. I remember everything anyone has ever said to me and filter it through all of my neuroses to reconfigure it as a judgement of my character. And in a staid, tired year like this one, I feel hyperconscious of all of my memories of anything that did not happen inside my apartment. If I squeeze my eyes shut, every memory of a beam of sunlight on the beach or head-first tackle from one of my parents’ dogs or congested subway car or rich buttery smell of movie theater popcorn overwhelms my system. It’s as if my brain has maximized the power of these memories, swirling and pulsating like a tie-dye shirt.

All of which is to say: I remember seeing The LEGO™ Batman Movie in theaters with my brother several years ago in Tulsa. I remember the floors were sticky. I remember drinking a cherry Coke. We were the only young adults there. In our 20s, unencumbered by children. Everyone else: a parent and a gaggle, weary and overexcited, respectively. And I remember some 20 minutes into the film when the LEGO™ Batman himself returns home from another evening of fighting Gotham’s worst LEGO™ criminals and microwaving himself a LEGO™ lobster thermidor complete with a LEGO™ slice of lemon. Instead of punching in two minutes, his tiny, claw-shaped LEGO™ hand punches in 20 minutes—two zero zero zero instead of two zero zero—and he mutters, “Oh, not 20 minutes. Stupid,” and a laugh so pure and ardent and knowing bubbled up from deep inside me.

It was absurd then and absurd now to relate to the toy pressing one extra zero into the microwave, and yet I did and I do.

The microwave was also a point of collegiate drama, which is to say that people were always burning popcorn in the microwave and setting off the smoke alarm in my dorm. I spent many a night in the dark, frigid Michigan air waiting to file back into my bedroom after the fire department declared it okay, the smell of burnt popcorn wafting through the halls. I spent a handful of years in my 20s living without a microwave. If I had to reheat something, I’d do it on the stovetop like an adult. Only when I started living on my own did my parents intervene, by which I mean: bought a new microwave for themselves and gave me their old one. “What do you mean, you’ve been living without a microwave?” they asked.

“What do you mean?” I asked—they were the ones who made me afraid of the microwave in the first place. I took the microwave and I used it enough, but there was always an air of caution. What if I put in the wrong time? What if it blew up? I watched it closely, nervously. The unholy marriage of heat and time in the corner of my apartment.

I am broadly indifferent to the genre of superhero movies: I like some, I dislike some. (I do not need to see another Spider-Man as long as I live.) I saw The LEGO™ Batman Movie for a very simple reason: it was there. It was February and I was in Tulsa, Oklahoma. They had Toni Erdmann in Tulsa, but I had already seen it. I had seen The LEGO™ Movie and was charmed by it. I like LEGO™. I like the aesthetic of it. I like their little faces. I like saying things like, “Don’t you think Robert Redford looks like a LEGO™?”

The LEGO™ Batman Movie is a Batman movie. I know this because it has Batman (LEGO™) in it. We have seen so many iterations of Batman-slash-Bruce Wayne at this point that I do not need to perform the backstory of what his deal is. The movie, too, does not really perform this backstory outside of a few shots of photographs (LEGO™) on the wall in Wayne Manor. How does The LEGO™ Batman Movie movie reckon with all of our different Batmans—West, Keaton, Kilmer, Clooney, Bale, Affleck? He is all of them; he is none of them. Voiced by Will Arnett, the LEGO™ Batman is closest, perhaps, to Keaton’s Batman by which I mean Keaton’s Bruce Wayne. He––the LEGO™ Batman––is an eccentric, lonely, possibly horny recluse. He is obsessed with himself. He is obsessed with the image of himself.

After an evening of fighting crime against Gotham’s most notorious baddies, he returns home via the batcave to Wayne Manor where he drifts aimlessly down to the kitchen. He is talking to no one. He is talking to himself. He is talking to the microwave. The LEGO™ Batman waits for his lobster to cook, making little popping noises with his lips, studying the rotation, the beam of light emanating from the machine. He is alone. He is lonely. Perhaps what The LEGO™ Batman Movie movie understands most—not only about Batman but dare I say non-LEGO™ human beings in general—is that loneliness is isolating, maddening. In the silence of our kitchens, our dens, our rooms, we mutter inanities. We tell little jokes. We scold ourselves for small mistakes. We tell ourselves that entering 20 minutes and not two minutes into the microwave is stupid because it is stupid (and dangerous). It is a small throwaway gag, but it is infinitely human in its rhythms.

I spent two months living alone this summer. Two months alone—I had lived for almost two-and-a-half years alone with no complaints during less tumultuous years—but in the wake of the world, there was an unbearableness that is hard to articulate. I tethered myself to reality through the simple act of routine. I woke up at the same time every day, coffee programmed to be warm and ready 30 minutes before I was out of bed. During this time, and indeed, since mid-March, I have had the same breakfast every day: oatmeal.

I would love to be the rustic type who makes oatmeal over a stovetop, but I microwave my oatmeal like I have someplace to be. (I have no place to be.) To make a perfect bowl of oatmeal in my parents’ old microwave, I have to microwave the oats and the water and the salt and the cinnamon for three minutes. As my oats puffed up, I’d wash my face, scrubbing the wearisome night’s sleep out of my skin. Every morning, without fail, I would return to the microwave after a minute of its journey to make sure I’d pressed three minutes and not 30 minutes. I never pressed 30 minutes, not once, but still. To sprint from the bathroom to the kitchen, patting my face with a small towel, I would squint, glasses-less, to make sure the microwave was telling me the truth.

What happens if something microwaves too long? My engrained childhood fear says: the microwave explodes.

I recently borrowed a pair of Nicholson Baker novels from a friend who’d been waxing poetic about his work for years. The Mezzanine depicts a man’s journey on his lunch break to buy a new pair of shoelaces. That’s it. Of course, that’s obviously not it: Baker takes us through a not insignificant amount of personal and consumer history of his protagonist. In The Fermata, Baker writes the autobiography of a man who is capable of stopping time for himself, using it to enact what I would lovingly refer to as “horny pranks” (your mileage may vary). Both are exercises in the freezing and expansion of time. An errand to CVS contains a lifetime of decisions leading up to that moment; the stillness of time provides endless opportunity to pursue sexual fantasy—or rather, to make pleasure infinite.

Let’s presuppose the lobster thermidor (or, say, the oatmeal) doesn’t explode. What happens when two minutes become 20? When a 30th of an hour becomes a third of an hour? When March becomes December? It is horrible; it is eternal. The microwave hums. It glows. In the silence of the kitchen, I stand against the counter, my bare feet cold on the tile. The LEGO™ Batman presses together his non-existent lips. It is a joke about time. It is a joke about human error. For a brief moment, before the LEGO™ Batman catches himself in his mistake, he opens a portal to a world where something else happens. Nothing bad. Just something different. Time passes in a new way. What is a lobster thermidor eaten alone in the darkness of a kitchen? What is a lemon slice made of plastic?

When I am alone now—for two months, for two hours—the time passes in both an instant and an eternity. It is morning then it is night then it is morning again. “I don’t know why people are complaining—I’ve never been more productive,” a friend says. I, too, have been productive: I have not yet blown up my microwave by accident.

A throwaway joke in a 105-minute film watched nearly four years ago in a city I’ve only been to twice stands firm like a monolith in the wavy goop of my brain. It is nothing; it is everything. I remember this joke—our laughter, mine and my brother’s—and it balloons—funny and flippant, realist and absurd. But I catch myself as I always do, before the reminiscing goes on for too long. “Stupid,” I mutter, and reset the clock.