Into the Blue: Transposing the Frame in Derek Jarman’s Blue 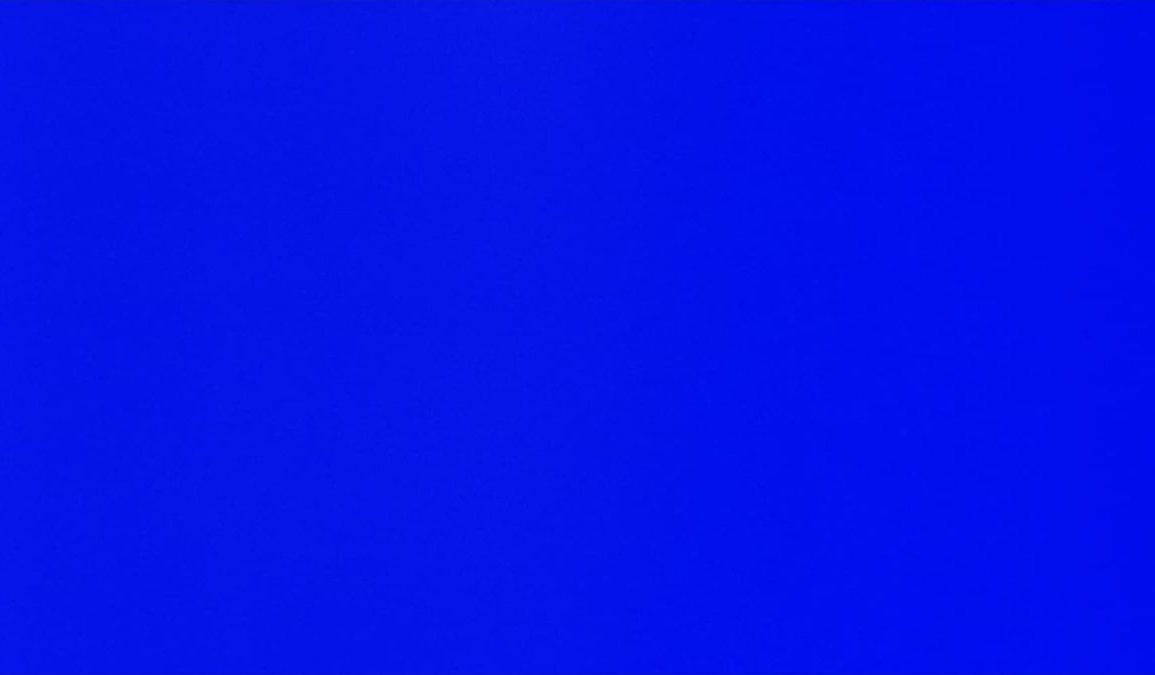 “In the pandemonium of image
I present you with the universal Blue
Blue, an open door to soul
An infinite possibility becoming tangible”

Derek Jarman’s final film, Blue, released in 1993, has often been referred to as one of the most experimental films ever made. Inspired by the work of Yves Klein, Blue consists of an unchanging blue screen while a soundscape of music, dialogue, poetry, and some of Jarman’s own hospital recordings play over the monochrome image. By the time of Blue’s release, Jarman was gravely ill, his experience with AIDS is detailed in the dialogue of the film. Blue touches on autobiography though Jarman uses unseen actors and sounds, allowing him to create a more layered representation of the AIDS struggle, one that is never too generalised nor overly specific, never too solemn yet imbued with a heartfelt truth.

Jarman’s relationship with art and filmmaking had altered since discovering he was HIV positive at the end of 1986, signalling an accelerated production of work indicative of his magnificent proficiency for making a great deal with very few resources. During this period, Jarman would make six films, write journals and release books, find a revitalized love for painting, and move to Prospect Cottage where he would create a garden among the hostile environment of Dungeness and its surrounding desert and nuclear power plants. Jarman’s ability to seamlessly cross between artistic disciplines was emblematic of his imagistic sensibility, where even his honest journal accounts would flow between diary entry and poetry.

However, it is Blue’s simple monochromatic display that makes it seem like a perfect accumulation of Jarman’s work up until that point. While disregarding the kaleidoscopic image sequences and wild splashes of color that had come to define his late-career work, Jarman manages to wed his painterly connection with his frequent critique of capitalism and the representation of homosexuality in the mainstream, all whilst retaining his distaste for traditional narrative structure.

His work around this period, too, started to fold its gaze further inwards, namely in his 1990 film The Garden (but also in his journals and written work) which used his coastal home in Dungeness as the landscape to explore wider society. It seems only right, then, that his film career would finish with an art piece both revolutionary in its form yet personal in its details, covering ground that criticized Thatcherism and the neglect for those affected by AIDS while elegising those who died from the virus in a succinct and effective 79 minutes.

Derek Jarman’s Blue is a film that pushes the limits of cinematic expression, an unwavering blue screen accompanied by a layered soundscape of voices, music (by Brian Eno), and lyrically written dialogue. Ultimately, Blue is an intense meditation on death and AIDS, its form a daring depiction of a debilitating illness: Jarman’s struggle with AIDS left his sight hindered by a milky blue hue. Formally, Blue interrogates the concepts of seeing and not seeing, rejecting traditional narrative structure in order to expose a reality that was often hidden (or mistreated) in the mainstream.

Blue’s dismissal of traditional representation—or “the pandemonium of image”—offered Jarman a unique cinematic space, one that gave him a means of creating an autobiographical film (and a film about AIDS) without being at the centre of it. Jarman’s voice is heard in the film (and his name even briefly mentioned) but Blue’s retreat from representation is emblematic of its universality. The blue of the screen is almost like a blue silhouette whose form can’t fully be identified, a space where Jarman can further blur the boundary between autobiography and observation. His use of multiple actors, too, is indicative of his desire to shift full focus away from himself; Jarman was just one of many affected by the virus and Blue makes this abundantly clear.

Jarman had reflected on his struggle with AIDS since he was diagnosed in 1986, famously becoming one of the first public figures to announce they were HIV positive. His journals, Modern Nature (released in 1991) and Smiling in Slow Motion (posthumously released in 2000), both reflect on his final years at Prospect Cottage, chronicling the creation of his garden despite battling the ravages of illness. Jarman was a figurehead of the gay community, a major spokesperson for gay rights (and was even made a saint by the Sisters of Perpetual Indulgence for his work for the LGBT community). But Blue offered Jarman a way of creating a film that started to account for everyone else that was affected, too, creating a space where homosexuality and AIDS could be more universally considered. This idea is heightened when considering Blue’s simultaneous release on primetime television and BBC Radio 3; finally, an art film became commercially accessible.

Jarman invites his audience into the film too, personifying the viewing experience through an ambiguous character named Blue. Blue rests at the heart of the film and appears at the beginning when tasked with opening his eyes.

Blue’s actions at the beginning mirror our own as Jarman encourages us to succumb to his choice of form, here, pleading that we don’t flinch or turn our gaze away from the unwavering blue screen. From the get go, we are tasked with opening our eyes, becoming at one with the experience. Unlike Jarman’s insular diary entries, then, that are neatly packaged and set in and around his coastal home, Blue and its luminescent colour becomes invasive, a piercing public experience that pulls its audience inwards into a wrought landscape.

Blue and its monochrome image heavily pays homage to Yves Klein’s Proposition Monochrome; The Blue Epoch, a series of canvases painted using only Klein’s International Klein Blue. Klein’s first exhibition of his International Klein Blue saw his multiple blue paintings together in one space, covering the walls with the similar shades of blue thus creating the effect that the blue was endless. The blue became panoramic, something that transcended the boundaries of a canvas and, by extension, the boundaries of eyesight. Jarman’s film has the same effect. Instead of multiple screens, though, Blue relies on its luminescent image to reflect the blue across a cinema room. Not only does the audience see blue on the screen, but on the walls and the ceiling, on the cinema chairs, and on their arms, too. Blue paints blue.

The blue of Blue thus transcends cinematic boundaries, using its viewing space as extended cinema screen. Here, Blue’s aesthetic becomes a far more palpable depiction of AIDS and Jarman’s life, its transposition from cinema screen into auditorium making the blue almost tangible. “Blue is darkness made visible” a voice says, and Jarman’s decision to use Klein’s blue as opposed to a blackness is indicative of Jarman’s desire to depict sightlessness: he wanted us to be aware that we are seeing that we are not seeing.

Further still, if one would close their eyes during the film they, too, would see blue. Jarman, whether consciously or unconsciously, created a film that was inescapable. Blue transposes the still frame and moves itself across a room. Blue also transposes from film and cinema space into a thoughtful space, blue becomes the image of thinking, of reflecting. It is possibly here that Jarman achieved his most important triumph: he created a film that offered space for people to reflect on homosexuality and the AIDS experience, never lecturing or patronising but offering a space for people to feel. Thus, Blue becomes a film about Jarman, about those affected by AIDS, but is also invasive as it becomes about us, and our reception of it, too.

At our current juncture in the middle of our own pandemic (that, too, can attack the senses), Jarman’s film seems to garner greater pertinence. Isolated and unconnected, the virus is doing a good job at hanging an uncertainty over the near and distant future. But what Jarman remains a key example of, even after 26 years since his death, is his ability to use current circumstances to drive his artistic work, continually finding ways to get out of the gloom of a stifling present.

There is a feeling of finality that permeates throughout Blue, making it even more appropriate that Jarman ceased making films here, though through Blue’s abstraction there remains a liberating experience, one away from the materiality of the real world, and through this there emerges a hopefulness, too. And while this may have marked an end for Jarman’s cinema career, Blue still manages to transcend its time and place, reminding us that Jarman’s films are as important today as they ever were.

“I place a delphinium, Blue, upon your grave”