Our Own Pieta, By The Portland White Elk 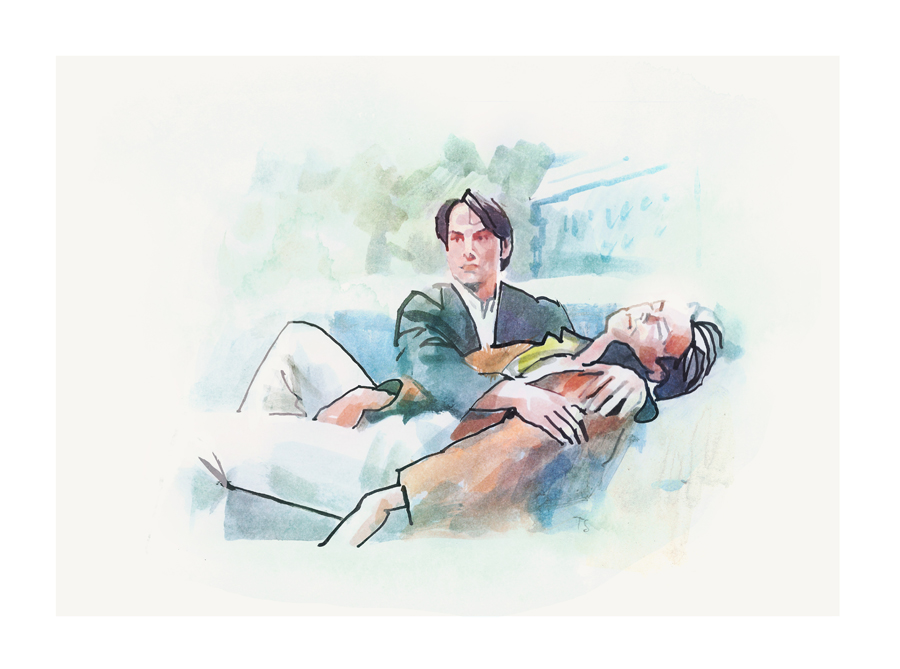 Once upon a time, Portland fit in the palm of my hand. The main artery of Burnside coursed to the river, where you could buy baggies of whatever from the people who circulated between Old Town and the waterfront. Those places are scrubbed clean, now; so am I, I guess. But that doesn’t mean I don’t miss it. Walking through the gentrified Pearl District, I can almost smell the coppery river water and the perfume of burning cardboard and hair. I feel solastalgia: homesickness for a place I have not left but that has transformed beyond recognition around me.

To live in Portland and belong to it is to be constantly groping for the past. When I miss it, I put on my VHS of My Own Private Idaho. This film—Gus Van Sant’s third feature—is about a pair of young hustlers, Mike and Scott. Mike (River Phoenix) is plagued by narcolepsy, which erases the boundaries of time, space, and propriety; Scott (Keanu Reeves) is the mayor’s son, running the streets to spite his father before he comes into his inheritance. From the bleak shots of Old Town to the cigarette smoke that discolors the winter-sharp air, My Own Private Idaho is a time capsule of the Portland I miss.

If you live in Portland long enough, it becomes part of you; in spite of its widespread gentrification and the sprawl that has erased the places I once knew, the bones are still there, like the white shadow on a photo negative. The best feeling is meeting someone who remembers the same city I do. It is like finding another expatriate in a city where nobody speaks your mother tongue, or discovering that the stranger next to you on the bus or at the bar once loved the same person you did, and can recall his quirks and special viciousness, his resentful eyes. Who is left, who witnessed Portland before its destination days? We are few and far between. Cinematographer John J. Campbell, who worked with Van Sant on Idaho (as well as Mala Noche and Even Cowgirls Get The Blues), photographed me around 2010. Being in front of his lens was riveting, in part because I knew he was looking at me with the same intensity he’d peered at Portland. Campbell’s vision of Portland in particular is small, intimate, with visual elements that link spaces. In the film, the camera peeks down halls and through doorways; we see Mike receiving a blowjob or playing Dutch Boy as though through a window. He’s framed, enclosed. The lobby of Jake’s, shown in all its art deco noir glory, emphasizes strong lines and divisions.

My Own Private Idaho is very much a Portland film, even though it is not about Idaho, nor is the majority of the film set there. Mike and Scott hitchhike up to Seattle, travel Oregon’s backcountry highways on a motorcycle, and even scavenge a couple tickets to Rome. Between johns, Mike fades into traumatic visions about his vanished mother. He is nowhere, always; Scott, who becomes his de facto caretaker, is eager to follow along. Mike’s experience is authentic because it is inescapable. Because of his disabling narcolepsy, Mike will never be more than what he is—at best, he might become a kept boy, trading his body for security until his lover tires of his frequent seizures. Scott, whose place in the world was guaranteed at birth, chases the thrills that Mike experiences as a daily horror. One day, he might reminisce about his wild days on the streets, disavowing the people who loved him, cared for him, and taught him how to hustle—such as Bob, the Falstaffian charlatan who raised him like a son. Scott can walk away when he’s tired of the game. He can marry and consider a run in politics, unconcerned about his past clouding his brilliant future. He can grow up. Survive. Go straight. But Mike? Forget it. There is no future.

Mike’s narcolepsy was prescient, in a way: the city itself has become a dream, distantly remembered. The fractured Portland in Idaho feels to me like a nod to Portland’s future, its present. The city of 1991 is distinct from the Portland of 2001 or 2010, but each strata of Portland is preserved in time, in memory. Living here is like living in a catacomb. A new Portland is built on top of the old one every few years. In time, we may flatten out and become like Rome or New York, where the past and present are constant bedfellows, but that hasn’t happened yet.

The way that Portland is incorporated into Idaho is essential to understanding the displacement that Mike experiences and Scott covets. If you haven’t been here, know that Portland is both urban and rural at the same time. We have the largest urban park in the country and more green space than any other American city. Even now, decades after the first major wave of interlopers showed up, the balance of city and woods is essentially unaltered. Few of the locations in Idaho are left. The ones that are gone or have been renovated into an unrecognizable state are part of the New Portland, the Portland of Portlandia. I love Idaho because it memorializes how dangerous my city was, back then; I think it’s our Mean Streets. Now, this place is like a theme park. Clean, shiny, safe, a Disneyland for white hipsters. It’s cute. The young sex workers who told their stories in Idaho, of their first johns and the unsweetened horrors of street hustling, are likely dead. Or living somewhere else.

Despite my long, fraught relationship with Portland, I haven’t lost the love I felt when I first came here. When I watch My Own Private Idaho (on VHS, no less) I feel a profound nostalgia for the person I was, for the city I loved. I lived like Mike for a long time, not realizing that I was Scott. I hustled, drinking in bars on a fake ID and collecting rugburns in different lawyers’ offices and apartments. I cleaned my friends’ rigs. Carried deliveries. I guess you could say I was straight-for-pay; I sold my beauty and my youth to men who couldn’t believe how lucky they were to get their hands on me. It was glamorous and miserable. Life afterward was boring in comparison, though it was a life, and I was alive to live it. By the time I sat for John Campbell, I was a couple years out of my old life but still longed to be swept back up in the city’s wholesomely gritty underworld. I missed the hustle and resented my newfound respectability. Like Scott, I reached my majority and aged out of the lethal lifestyle, leaving through the trapdoor of privilege. (Van Sant, too, exited through the trapdoor of celebrity—he went on to Hollywood and schmaltzy prizewinning films with a trademark thick, California-golden glow on the lens and real stars in them, not boys paid a hundred to talk about getting raped on film.) I don’t know many people who survived the street days; a few of us have gotten sober, moved on. We get together and reminisce. We catcall one another like the boys on the cover of Male Call and Honcho. We wonder if this twee outpost still has a little dirt under its nails.

In Van Sant’s Portland, you’re in or you’re out. You’re wealthy or poor. Mike’s stumbling confession by the campfire confirms how impossible it is to be between those spaces. “I love you but you don’t pay me,” he says to Scott. The film’s title is a nod to this queer, impossible dream of togetherness. Amy Taubin wrote, “‘My Own Private Idaho’ is an imaginary place where one is locked in the arms of love—that is, both protected and free. It is the promise of America, chronically out of joint with reality, especially for its most vulnerable inhabitants.” You are the photographer or his model. You are the hustler or the john. You are Scott, playing at subsistence, or Mike, eternally trapped to live hand-to-mouth-to-ass-to-guts. There is no flex in the Portland of Idaho, no ease. You have to pick a side or accept the one you’re thrust into. Characters like Bob—Van Sant’s nod to Shakespeare’s Falstaff, the quixotic charlatan from Henry IV, on which Idaho is loosely based—struggle to move upward in the rigid social strata. Whether through scheming or marriage or theft, these efforts come to nothing. In Idaho, love eases the discomfort of being where you are; although the film contains the elements of a folk story, love is not the transformative force of fairy tales. Love arises after the panic of being stuck subsides. When everything else is gone, there is love—but only at the last.

And maybe that memory is all we could ever have, all we could ask for. I wonder if it was a dream sometimes, two decades-plus and the clouds in my brain thickening with time. Were we really there? Did we really do those things? John Campbell died recently and had no obituary, no monument to his magic eyes that animated the place that we both loved and the weirdos who ran wild through it. He loved me and I didn’t pay him. I have the photo he took of me, caught between expressions; he called it his Mona Lisa. Like Portland, he is a story now, a photo, and a memory. I think it’s tragic that the vision of this shared childhood is left to the survivors. We were not strong or smart, we were merely lucky.

If Van Sant was a Mike he wouldn’t be telling the story, and if I was a Mike I wouldn’t be missing Idaho’s Portland. It’s Mike’s story, but it is up to the Scotts to remember it. I hope we do it with love, however imperfectly.