The Capital Dome, As Big As Life 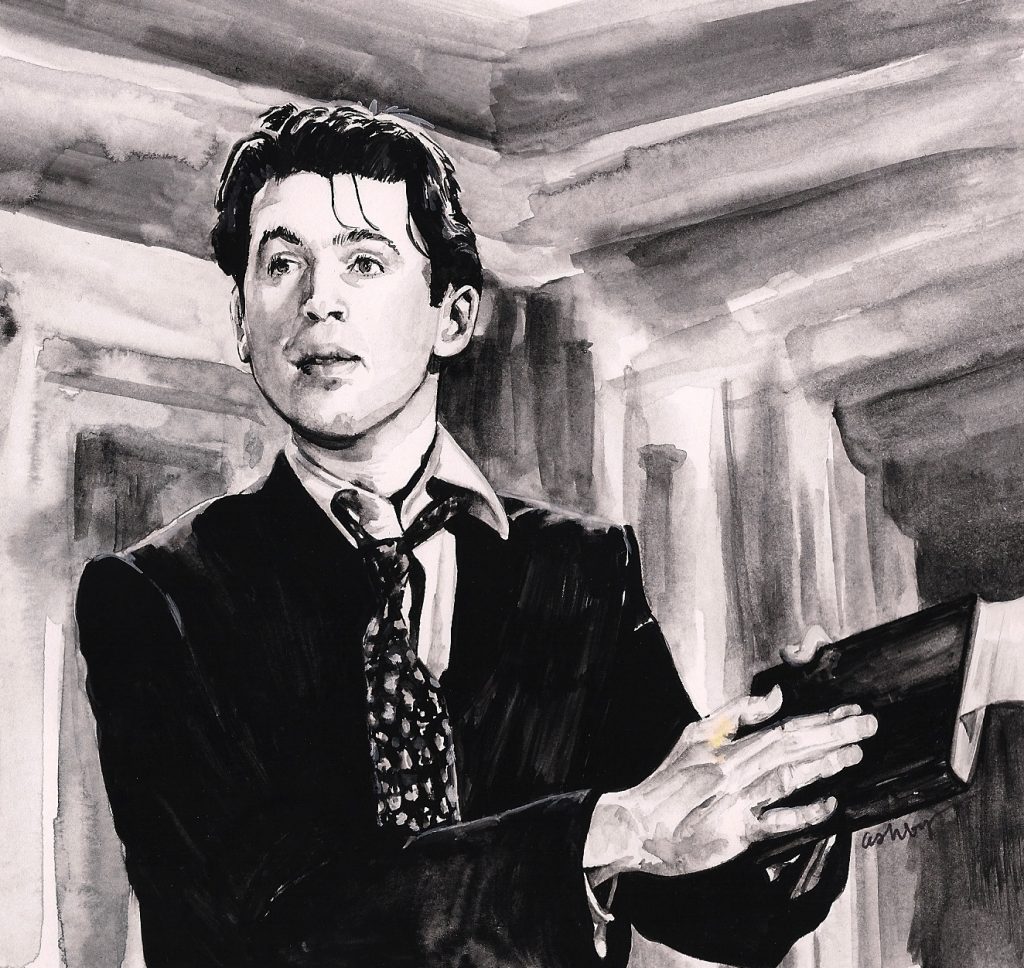 illustration by Brianna AshbyThe newcomer arrives with out-of-town clothes, and allusions to American political ideals rarely more than a few sentences away. His handlers—the lackeys of a political machine that he doesn’t realize runs his home state—hear his every word as proof he’s “a big-eyed baby,” as the governor who appoints him to a midterm Senate vacancy exults: the new senator “wouldn’t know what it was all about in two years, let alone two months.” Nor notice the machine’s graft embedded in pending legislation, or be able to halt it.

Senator Idealist Everyman goes to take up his position in a capital populated by flacks, bosses, hacks—cynics who went there for personal advancement, financial gain and the security of acceptance into the great fraternity-sorority of those who understand the rules and play by them. Of the machine-made men, only Senator Paine—the senior senator from Smith’s state, and one of Smith’s boyhood heroes—seems troubled by a divergence between actions and professed beliefs. Paine participates in the machine to stay in the Senate. He doesn’t like thinking he is in the Senate for the machine.

In Washington’s Union Station, meeting congressional staffers and Senator Paine’s daughter and her friends, Senator Smith manages a glazed thanks to their close-talking banter, the heartiness and ribaldry they switch on and hurry off from to their next appointment while the lackeys hassle with Smith’s luggage. Smith glances over the lackeys’ heads.

“Look! Look!” His voice rises in that startled James Stewart marbling around the mouth up to an urgent bark, observation as imperative. “There it is!”

The gravel-voiced head lackey is irked. “Who? What?”

“The Capitol dome.” Smith gets a reverent hush.

“As big as life,” another lackey says. “Been there a long time now.”

“It’s characteristic of Frank Capra to let the hero locate validation for his ideas in the physical world.”

The lackeys could be the wise guys of any business in any big city in a 1930s film. Their natural habitat is interior shots, closed-door offices, transactions in brassy restaurants. Everything about Smith is an imposition to them: his homing pigeons whose crates they have to lug through the station, his assumption that in matters of national feeling everyone should respond as he does—and if everyone doesn’t, it’s because they need Smith to point out what they don’t notice, and what to think about it.

It’s characteristic of director Frank Capra to let the hero locate validation for his ideas in the physical world. Smith’s handlers don’t notice, or else discount, how swiftly and completely Smith recovers his composure after his failure in repartee. He is reclaiming his Washington arrival, recasting it in his terms. Deliberately or instinctively, he repairs to abstractions, and, transfixed, exits the station into the Washington designed to impress visitors: exterior Washington, the tangible symbols of abstract ideas afloat on a low roofline, to be glimpsed between avenue trees from a sightseeing bus—or to enter, head craned up to take in the scale of it all.

Audiences whose daily news came by newsprint and radio announcer must have understood how remote Washington’s landmarks had seemed to Smith until then. In television news backdrops and website banners, landmarks thin to quotidian symbols indicating you are here. Now, to the business of the day—

Smith isn’t a reformer per se—he is chosen, not chooses, to go to Washington—but he partakes in an American vernacular of not-yet elected candidates for Congress and the Presidency. The nation didn’t originate in the capital; the capital was created solely for the nation, and must be refreshed with newcomers if it is to remain in touch with the people. A lack of experience becomes a qualification. Outsiders go to Washington avowedly uninitiated in its customs, with the conviction of untried solutions only they possess or perceive the necessity of. If only the nation could remember its founding principles, as the reformer does! Smith’s is not the reform of Depression-era recovery programs—oblique criticisms of the New Deal pepper the film—or of social programs and public expenditure. “The government has too much on its hands already,” he says. Smith’s reform is intangible.

Smith is certain of one practical thing the nation needs: a national boys camp, to “get the poor kids off the streets, out of the cities for a few months in the summer, and let them learn something about nature— American ideals—” Senator Paine, to distract Smith from the machine’s real interests in the Senate, suggests drawing up a bill for the camp. Smith sounds a note of relief, agreeing. “If I can just do that one thing while I’m here, that boys’ camp.” It’s his first overt reference to an end to his stay in Washington, and his first tangible goal to shut out the overwhelming vagueness of being the new kid on the Senate floor, not knowing what comes next, not even recognizing cues to it.

He envisions boys’ contributions repaying the government’s expenditures on the camp. No one Smith has had contact with in Washington to that point is not laughing at the junior Senator behind his back or to his face, but thousands of boys respond immediately to his proposal, and the question of the camp’s funding is dispensed with. (In Capra’s world, children and small town folk can be depended on to appreciate sincere goodwill.)

The camp is so reasonable, so important, who could demur—except, as it happens, the machine to which Senator Paine owes his career? The machine has arranged for a dam to be built overlapping Smith’s proposed camp location, and the machine boss, Jim Taylor, does not intend to lose money on land he purchased in expectation of selling it to the government.

The machine is an apt adversary for a film in an era of machine politics, and a telling narrative choice. No political parties are specified in Mr. Smith Goes to Washington. The machine’s only doctrine is itself. “You didn’t ask me!” Jim Taylor complains to the governor about appointing Smith. The machine is government by the boss, for the boss, for money, for ego.

In concept, Smith’s camp is a pastiche of American leitmotifs: Boy Scout ideals of healthy outdoor living, (Thomas) Jeffersonian mistrust of the city, Emersonian rhapsody on the power of natural beauty to refine the spirit, and a vision of the Capitol dome illuminating it, the symbol lifted out of the city without which it wouldn’t exist. Does learning about American ideals require prairie grass and babbling brooks? What will boys learn about each other there that cities forestall? Smith takes his particular experience as a universal prerequisite for civic preparation, with himself unselfconsciously an example of the result.

His body politic is an unquestioned boys’ club. He marvels to his assistant, Clarissa Saunders, “For a woman you’ve done awfully well.” Well—this is the nineteen thirties. His admiration of Saunders’s mastery of the intricacies of Senate procedure, and his gratitude to her, are genuine. She is initially as derisive as anyone is of him. In his first feints at deprecating humor, his downright goofiness, she begins to enjoy his company. She knows that the imagery he clothes his idealism in is “corny,” as she says later (not to him). But as he talks, recognition of his sincere wish to do right is plain in her face.

Her previous associates have all tended her toward cynicism: the political operatives whose corruption she despises but has not resisted except to mock, and the boozy reporters she takes solace in mocking them with. Get ahead and get out has been the best she could do. Cynicism has been a fence against despair.

“Go ahead, be a senator, try to mess up Mr. Taylor’s little graft,” she tells Smith. “But if you can’t—and you can’t in nine million years—go home and don’t stay around here making people feel sorry for you.”

When Smith does try to mess up Mr. Taylor’s graft, and seems to fail—against Taylor and Paine’s false accusations of precisely the kind of profiteering they’ve planned—it’s Saunders who is Smith’s one ally in Washington, and knows to find him at the Lincoln Memorial.

“You had plain decent everyday common rightness,” she tells him. “You can’t quit now. They aren’t all Taylors and Paines in Washington.”

Saunders, lifelong city dweller, hadn’t forgotten what her country meant, as Smith said happened in the absence of nature. She’d long despised the machine but had no hope of taking it on with a chance to win. She had no platform to. But Smith does, and Saunders can strategize as he doesn’t know to.

“Clarissa, where can we get a drink?” He has his hat in both hands.

They’re becoming alike. Or were, all along.

“Is it plausible, the softening of the film’s hardened hearts?”

One of the film’s repeat pleasures is its patience with Senate procedure, its long scenes and returns to the chamber, the rhythm they set of a daily routine: galleries filling, the Senate president calling roll, recognizing Senators to speak, and warming toward Smith, until by the time Smith begins to filibuster, the Senate president sides with him and Saunders.

Is it plausible, the softening of the film’s hardened hearts? Boys with the earnest cadences of 1930s film children rally to Smith’s cause. Senator Paine, a reluctant but forceful crook, confesses on the Senate floor. The Taylor machine is broken. Senators rush down from their desks and crowd Paine, the press rushes off to file wire reports. The camera follows Clarissa and the Senate president, the sound stays tight to Clarissa’s cheers, and the spirit of the day seems to shift.

Smith, passed out from exhaustion, doesn’t hear it. He says his final piece despairing. No senators except, eventually, the repentant Paine, support him. But when Smith faints, Paine is still in his chair, the Senate unmoved by Smith’s invocation to love thy neighbor. Ragged-voiced, vowing that he’s not licked, Smith in the barest terms isn’t licked, as long as he keeps talking. But he’s no longer talking to convince his audience of ideals. He’s asserting fortitude, talking because it’s all he can do.

A 2014 Senator Smith could wander off from his—or her—handlers at the airport. Our Taylor would have a lobbying firm on K Street or a media empire, our Smith run afoul of him over drilling rights or a pipeline right-of-way versus a proposed national park. A Taylor machine would hack the phones and emails of reporters covering Smith’s filibuster and issue denial-of-service attacks against their websites. The machine would have to hustle to hijack the hashtag campaigns Saunders would start on Twitter for #ThisLostCause and #JeffTellsTruth.

It’s harder to imagine the Senate floor without the rhetoric of right and left, each side citing the Founding Fathers or Lincoln—or Capra—in defense of imperiled liberty against an overweening government set to trample the rights of the people. One side’s more perfect union is the other’s tyranny. Graft and abuse of office cross ideologies, but it’s the ability of film to cross from naturalism into fable with no break in continuity that lets Capra detach favors and influence from philosophies about the reach and appropriate role of government, the vexed interpretation of everything after we the people. Even “a little looking out for the other fella,” as Smith puts it—what does it entail, what does it look like? We’ve rarely agreed, in nearly two hundred and fifty years.

Let’s go to Washington and talk about it.

Sarah Malone’s work has appeared in Five Chapters, Hobart, PANK, Parcel, The Awl, and elsewhere. She’s working on a novel and tweets at @sarahkmalone.