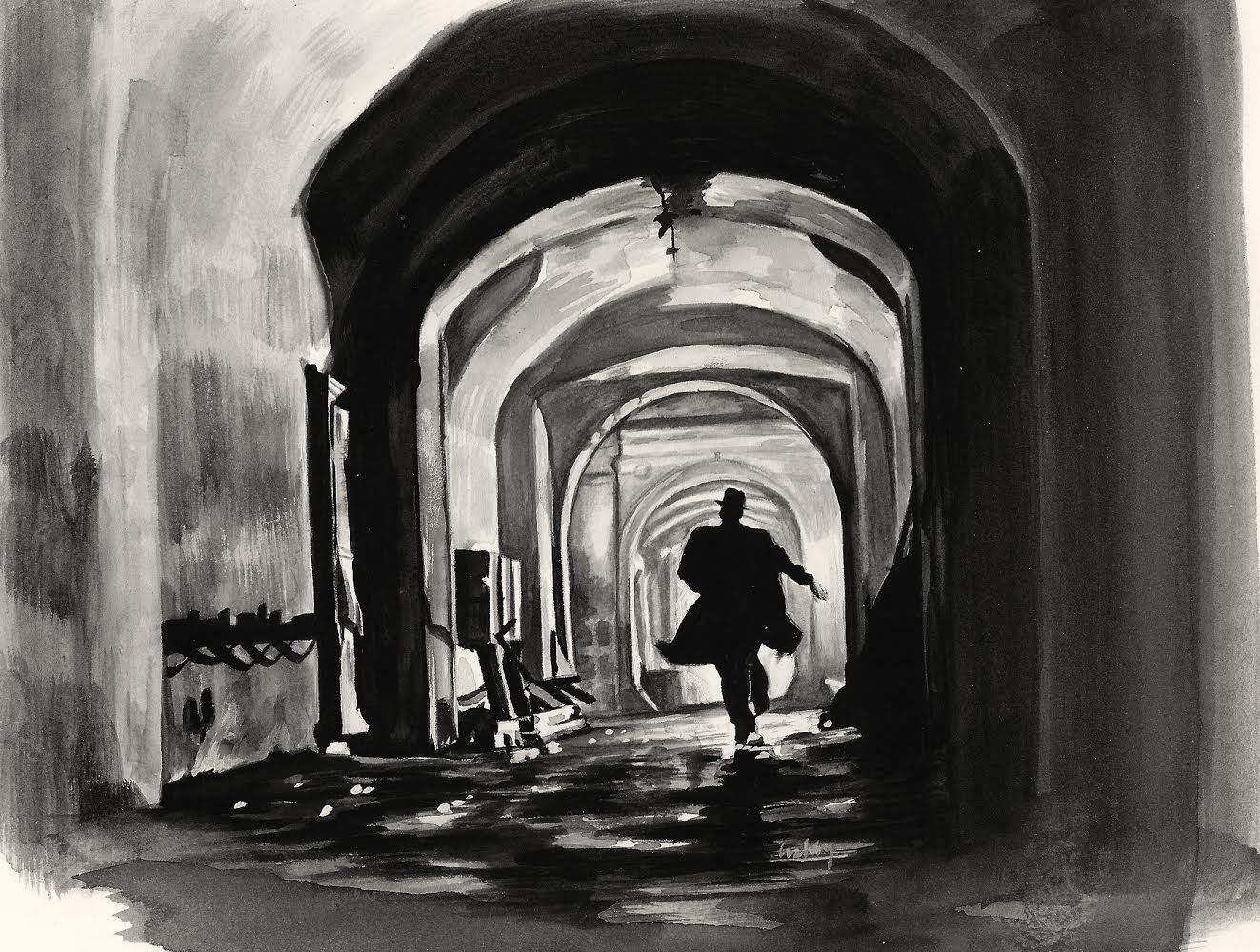 illustration by Brianna Ashby
When Alexander Korda approached Graham Greene to write a film about post-war Vienna, Greene sold the producer on a single line from a stalled story he had attempted to write twenty years earlier:

“I had paid my last farewell to Harry a week ago, when his coffin was lowered into the frozen February ground, so that it was with incredulity that I saw him pass by, without a sign of recognition, among the host of strangers in the Strand.”

This beginning, which became the catalyst for The Third Man, might be interpreted variously as a false funeral, or a visit from the dead, or a hallucination—Greene understood that a post-war tale was a tale of the uncanny. After 1945, Europe was a place of undetermined reparations and unclaimed debts, of living souls haunted by the trauma of war and by the memory of earlier, more pristine versions of themselves. With its postwar devastation and redrawn boundaries, The Third Man‘s setting makes a perfect geographic metaphor for its characters: they are all palimpsests, written, and written over.

The British cut of the film begins with director Carol Reed’s voiceover. Vienna is presented in b-roll footage: the skeletons of buildings, an international Allied team of soldiers attempting to restore order. Unlike the newsreel narration at the start of Casablanca, which glamorizes wartime corruption as a matter of life or death, Reed’s voice is matter-of-fact. “I only got to know [Vienna] in the classic period of the black market. We’d run anything if people wanted it enough and had the money to pay…” In the aftermath of war, everything has a price, but what of it?

Amid this bombed out landscape arrives Holly Martins (Joseph Cotten), pulp novelist, Yankee blunderer. Holly is the prototype of a certain kind of noir hero, whom we meet in films such as Double Indemnity, Chinatown and The Big Lebowski: he is the hapless or unintentional investigator. From the start, Holly doesn’t understand a thing: not the language, nor the local politics, the nature of his closest friend, Harry Lime (Orson Welles), who brought him to Vienna with the promise of work, or of his best friend’s friends—toothy grinned, jaundiced men who manage to thrive in a city that isn’t quite alive. The military police, led by Trevor Howard, insist Lime was the worst kind of warmonger, but Holly won’t believe it.

The novelist decides he will solve the mystery of Harry’s demise and restore his friend’s good name. He discovers that, in addition to the doctor who certified Lime’s death and a shifty-eyed Baron, there was a third witness to Lime’s end. Here we have the film’s mystery and Holly’s quest: he is certain that this third man will straighten out the sordid world in which he has landed.

Holly knows the presence of Maria (Alida Valli) at Lime’s funeral is noteworthy: she’s the only woman and the only genuine mourner. She is also curious: Valli’s eyes are too closely set; her face is long as a Modigliani subject; her eyes, glowing and vulpine. Hers is the attraction of approximate beauty. Orson Welles once said there were no great performances in color, and Peter Bogdanovich interprets this remark to mean that in black and white you get the emotion without the prettifying distraction of color. In glorious monochrome, Valli requires multiple looks. Her Maria is changeable and unknowable even while she suggests somber self-awareness. When Holly tracks her down, she’s on stage, performing in what looks to be a kind of 18th century farce. “I only play comedy,” Maria explains when Holly surprises her backstage. This is the straight-faced irony that suffuses The Third Man: the compromises and the corruption can only be approached sideways, and lightly.

In a New York Times article about the film, Greene proposes that “reality, in fact, was only a background to a fairy tale” — that his project for the film was entertainment, and not reportage or propaganda. Even so, his dialogue is as elegant and the morality as graded as in any of Greene’s novels. “Human nature is not black and white but black and grey,” Greene wrote. In work and in life, he grappled with grace and compromise – he was a Catholic who retained his faith while regularly transgressing most of its strictures.

Greene makes The Third Man a morally ambiguous place – the best intentioned fools are as deleterious as the warmongers. Holly’s is a story of misunderstandings and malapropisms, of Holly’s blithe incomprehension of what he’s walked into, along with other characters’ misperceptions of him. These incongruities subvert meaning, as when an Austrian concierge explains Lime’s death, gesturing toward the sky and saying “Hell,” and then toward the earth for “Heaven.” Anton Karas’ powerful soundtrack works according to a similar dissonance. The solo instrument, the zither, is odd counterpoint to the sinister narrative, and makes The Third Man into a zithering world: concentric, nonlinear, romantic and nostalgic.

Indeed, the movie moves with a torque that seems both instinctual and skilled. Reed’s mise-en-scene—the odd camera positions, the nimble manner of characterization, the richly drawn secondary characters and background faces that populate this film—show a director devoted not just to thrilling an audience but to revealing something to them. What’s remarkable about the picture is how his sequences work upon your attention. It takes some time to understand that the hero is a dupe, that the most cherished character in the piece is a villain, that the bureaucratic militia might be the most ethically balanced population there, that the third man is the elusive Harry Lime.

Somewhere along the way—maybe from the start, when Orson Welles manufactured a storied Broadway theatrical career to establish his stage and screen bona fides—Welles became the ultimate trickster. It is apt that, late in his career, he made the documentary F is for Fake: he was a figure of obfuscation and distraction, of excess without self-imposed limits. About half of Welles’ eight minutes in the movie— the scenes that aren’t close ups—were doubled by assistant director Guy Hamilton or by Carol Reed himself, because the producers couldn’t wrangle Welles to return to the set.

After the release of the film, Welles supported the idea that he’d had a hand in Reed’s direction. That’s unlikely, but what is certain is that he improvised his great speech in which Lime challenges Holly about the relative value of law and order:

“You know what the fellow said – in Italy, for thirty years under the Borgias, they had warfare, terror, murder and bloodshed, but they produced Michelangelo, Leonardo da Vinci and the Renaissance. In Switzerland, they had brotherly love, they had five hundred years of democracy and peace – and what did that produce? The cuckoo clock.”

His Harry Lime (perhaps a kind of author surrogate—the playfully named Lime created by novelist Greene) is the kind of amoral friend who’s the life of the party. He’s the guy you miss without knowing that you don’t know him at all, and that he has only trifling regard for you. What is it about a con artist that makes them so appealing? Everyone is looking for the lift that magic promises, even if we intuit the promises are too good to be true.

Steven Soderbergh has said that everything you’d need to know in order to make a film can be found in The Third Man. If you haven’t already, you should watch it as immediately as possible, for the film is so embedded in the minds of modern filmmakers that you will likely see many of The Third Man‘s images recycled in other’s work before you ever encounter the film itself. Nolan’s and Burton’s Batman movies, among others, have drawn from its waterlogged subterrane and its misty exteriors. But perhaps Soderbergh meant that when you want to show a world that is corrupted—a world on a moral grayscale—then storytellers should look to The Third Man.

Valli’s Maria is a most complex woman in cinema—pragmatic but romantic, betrayed but stalwart, besotted but aware of her own blindness. What comprises this love for Lime? Even when confronted with his crookedness—the self-interest that has led to the deaths and illnesses of countless children—she can’t reject him. She holds in her mind and heart all the versions of her lover. The one that forged papers so she wouldn’t be deported to Russia where, by virtue of post-war boundaries she’d find herself a citizen; the one who remembers her on his death bed; the one who jettisons her when her interests no longer align with his own. The contradiction that novelist Holly cannot encompass is a thing that Maria understands best of all. And in her understanding, there is transcendence.

In his treatment and novelization of the film, Greene wrote in a hint that Holly and Maria end up together—a pragmatic move for Maria’s character. Reed, on the other hand, lets Maria remain principled at the finish. Holly jumps out of a car to wait for her to walk out of Lime’s second, and actual, funeral. He presumably misses his plane to America believing he can help her, but Maria snubs him. She won’t forgive Holly’s betrayal of his friend Lime. This inelegant American, who thinks he’s finally found the right side of things, hasn’t learned much at all.