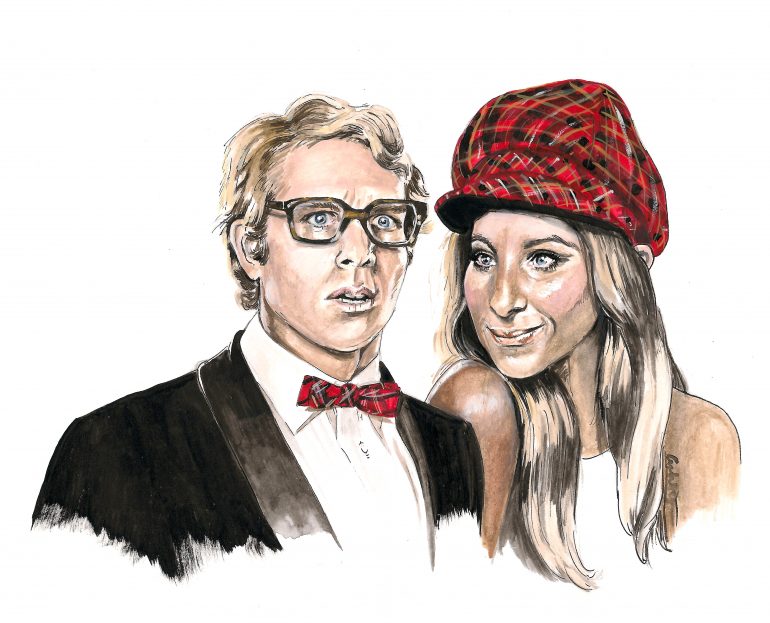 SAN FRANCISCO, CALIFORNIA — Frederick Larabee, founder of the Larabee Foundation, was among more than a dozen people involved in a high-speed car chase that ended in the San Francisco Bay yesterday afternoon, according to police.

The chase occurred not long after a non-fatal shootout at Mr. Larabee’s private residence, during a luncheon intended to honor musicologist Dr. Howard Bannister.

“They started throwing cream pies at one another,” one of Mr. Larabee’s staff confirmed.

Dr. Bannister (as in, “sliding down the”) was one of two men honored at a musicology convention this weekend, hosted by the Larabee Foundation at the Hotel Bristol. Although specific details aren’t yet available, Mr. Larabee stated during a brief press conference this morning that the trouble started when four identical plaid overnight bags got mixed up at the hotel.

One of the bags carried Dr. Bannister’s igneous rock formations, which he intended to use to demonstrate a musical theory at the convention. This bag came to be in the possession of three alleged mobsters, whose purpose for the bag is unclear. Their identities have not yet been confirmed.

“They are Italian,” was the only lead a witness could supply, flipping his hair.

Another bag belonged to socialite Mrs. Van Hoskins and contained hundreds of thousands of dollars worth of jewels. While fraternizing with mostly young, good-looking police officers, Mrs. Van Hoskins shared that she’d been “beside [herself] with worry” when the gems went missing.

“I ran into the hotel lobby screaming,” she said. “Hans, the concierge, could not console me.”

According to sources at the Bristol, there is no concierge named Hans — only one named Fritz.

A further plaid overnight bag belonged to drifter Judy Maxwell. Miss Maxwell, always enrolled, never a graduate, kept clothing and other personal items in the bag, which ended up in the possession of a man who goes simply by “Mr. Smith,” whose own overnight bag mysteriously ended up in Miss Maxwell’s hands. Witnesses at the scene described the contents of this final bag as “top-secret government papers.”

In a surprising turn of events, Miss Maxwell also happens to be the daughter of the judge presiding over the case. Judge Maxwell had to be rushed to the hospital after the court hearing, during which at least twenty people mobbed the stand. During the court session, Miss Maxwell inexplicably hid her identity from her father by wearing a blanket, and remained close to Dr. Howard Bannister throughout the proceedings, although she referred to him repeatedly as Steve.

In addition to the courthouse, the San Francisco Bay, a pane of plate glass, a ladder, five cars, a city staircase, a freshly-paved alley, a Volkswagen bus, and a costume shop, both the Hotel Bristol and a historic Chinese New Year parade sustained damages.

“I began knocking on Howard’s door at exactly 10:05 p.m.,” Miss Eunice Burns, Dr. Bannister’s fiancee, shared with investigators. “There had been a lot of noise, and I was concerned.”

She would not admit to a domestic altercation, claiming that she and Dr. Bannister “know the meaning of propriety.” A room service waiter, who was the only other person present at the scene, insisted he’d seen nothing out of the ordinary when he brought dinner up to Bannister’s room.

Miss Burns also lost a wig valued at precisely $25 in the chaos, and claimed she has never gone by the name “Burnsy,” although the name appears on the bailiff’s list of defendants.

An expert examined the Chinese dragon that Miss Maxwell and Dr. Bannister dragged behind a stolen grocery delivery bike during the high-speed chase.

“I don’t see any damages,” the expert deduced.

“Well, there’s not much to see actually, they were inside the Chinese dragon,” a bystander explained.

“I just want my bike back,” another witness, a grocery delivery boy, shouted.

Dr. Bannister and Miss Maxwell declined to comment, although when pressed, Bannister asked, “What overnight bag?” He then offered to give a musical demonstration on his igneous rock formations. Bannister and Maxwell underwent mandatory psychiatric evaluations before being released on bail.

The Chronicle also interviewed a man who’d been walking in the vicinity and claimed to have been chased by “a horde of possessed garbage cans.” However, his testimony is being withheld from evidence until his blood is tested for illicit substances, and it is not yet clear whether or not he was directly involved in the incident.