So We Beat On, Boats Against the Current…

“Now it could be anything.”

Congratulations, Ted Chaough: You get the most irresistibly apt line in an episode packed to the brim with them. “The Forecast” is lousy with explicitness. People (mostly Don) are confronted with challenging truths in language so plain it’s funny. Don’s realtor dissects the state of his life with the cruel precision of a mean girl. Glen bares his soul to Betty and dares her to fend him off when he’s on his way to Vietnam. (In a fitting end to their bizarre relationship, she sends him off with perhaps her most maternal moment ever: that classic war-wife smile, steeped in good intentions and dread. “You’re going to make it; I’m positive.”) Sally’s generally on fire, and after taking in some disturbing scenes between her mother, her father, and various teenagers, expertly sums up her parents in one epic burn. Even Mathis gets in on the fun. And Roger hands Don a writing assignment that could apply to the company, yes, but also to Don personally or, you know, America in general.

All this explicitness weirdly has the effect of jump starting things, making it a perversely hopeful episode. Don puzzles over his forecasting assignment throughout the hour. He’s searching for the right answer to the question, “What’s next?” No one can satisfy him—even Peggy, with her characteristically specific goals, can’t see much further than landing the big account or coining the famous catch phrase. As Ted and Don muse over donuts, survival is now all but guaranteed. So now what?

The question consumes Don. But, meanwhile, he seems increasingly galvanized with each crippling indictment that’s hurled his way. Finally, in response to Sally’s brutal assessment of him, he’s driven to give her the best advice of his fatherly career: “You’re a very beautiful girl. It’s up to you to be more than that.”

When Don gets back to his condo that night, his realtor is in the middle of selling the place. To keep him from distracting the new owners as they sign the papers, she literally shuts him out of his own home. He turns away and stares down the hallway to the strains of “The First Time Ever I Saw Your Face.” This is the first time Don has ever been alone, secure but untethered, and without secrets. Now it could be anything. It is supremely moving, sad, and, yes, hopeful.

Why no mention of Joan, you ask? Why, because I’m about to devote the entire remainder of our time to her…

“That sounds wonderful, but I have some place to be.”

As far as Mad Men goes, Joan’s arc is the one that rattles me the most. It means too much to me. I get irrational. I become one of those fans who doesn’t care about poetry, who can’t see the big picture. I just want Joan to have everything she’s ever wanted. This makes writing about her difficult. I tend toward hyperbole, such as: “The Other Woman” made me cry harder than I’ve ever cried; or: seeing Joan order room service while on a business trip made me the happiest I’ve ever been; or maybe: the revelation of Joan having been married twice is the most shocking development in television history.

This unreasonable Joan-loving side of me has been uneasy for awhile now. It’s not actually that I want exclusively to see Joan live happily ever after; I want her journey to be as complex and shaded as Peggy’s, Pete’s, or Don’s. But I badly want to see that journey. We haven’t seen a whole lot of Joan since Jaguar. She’s made enormous strides in her career, and she’s certainly remained fascinating as an individual and as a player in the world of the show, but we haven’t really gotten to dig in with her in a long time. I’ve often worried about whether, as the show winds down, the character will be given the attention she demands. I try to silence that worry, because it’s not how I usually react to Mad Men. I trust this show, and I know I should trust it with Joan.

“The Forecast” rewarded me for that trust. The Joan we see in “Severance” is struggling to simultaneously shed her skin and inhabit her new life without compromising what she holds dear. She is an executive, and yet she faces the same demeaning treatment she always has—because she looks the way she does and (according to Peggy) dresses the way she does, she isn’t taken seriously. Joan has no real allies these days. Her road remains a lonely one.

But “The Forecast” suggests a new bend in that road. While she undoubtedly has to put up with some difficulty in this episode, Joan is operating in a new sphere here. Note that, as is so often the case, Joan reads as the only adult in the L.A. office, with Dee and Lou ineffectual and nonsensical beside her. Dee gets frozen out when she tries to engage Joan as a peer (“Have you seen Warren Beatty?”). Lou can trivialize Joan’s efficiency all he wants to; we all know which of the two will be left standing in the end. 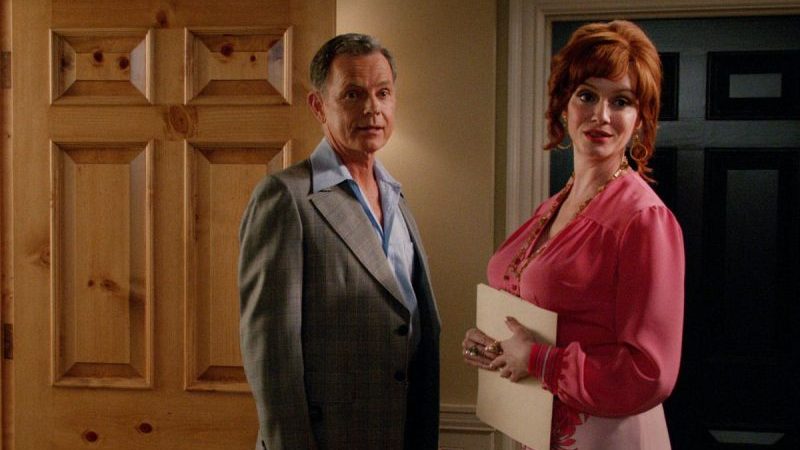 When she meets Richard Burghoff, she shakes his hand swiftly and vigorously, like a man. She says, “I’m Joan Harris. I’m an account executive and a partner.” Because she is. This is no secretary angling for a country home; she’s meeting this man as an equal, and he accepts her as one unquestioningly. Many of the exchanges that follow are thrilling for that reason alone. The banter, the pillow talk, and even the arguments are free from the core condescension that usually characterizes men’s interactions with Joan. He’s still a man of his time—he uses some of the same old lines, and generally recalls the vernacular of Duck Phillips (honey, cad, heel)—but his attitude toward Joan is open and plainly respectful. Even when he reveals his weakness in his reaction to finding out about her son, we’re seeing something new. The heat of his response is rooted in the clear fact that he cares enough about her to be affected by the details of her life. In the end, he’s able to confront the seriousness of his feelings for her, and he bends.

Yes, this man is different. But so is she. When Burghoff explodes over her inconvenient maternal status, Joan, disappointed as she is, stands firm. She is secure in her priorities. He’s good at painting a picture (a phrase used earlier in the episode, incidentally, by Ted to describe Don), but he hasn’t considered her life in the process. And she does have a life. It is unfortunate, but there’s nothing to be done.

(And oh, but she wears disappointment beautifully, doesn’t she? “You’re right. Nice meeting you.” This is something we sometimes see in Betty, too, even in this very episode—this immaculate training that, for all its warping constrictions, also provides these women a scaffolding on which to balance moments of deep emotion.)

In that moment, and later in the determined affection of her tone when she calls to Kevin,“Bye bye, sweetie!” even as she despairs that she’ll never find love while she’s his mother, Joan’s strength crystalizes in front of us. Her meeting Burghoff renders her situation explicit: she’s walking away from the promise of one love in service of her promise to another. “That sounds wonderful, but I have some place to be.”

We get to see so many shades of this woman in one hour: satisfaction, delight, hope, skepticism, authority, discouragement, anger, defiance, love. We see her use some new tools and some old ones. Watch her tried-and-true coquettishness come out, on the phone with her son, or trying to manage Burghoff’s reaction when he learns of her curfew: “I wasn’t going to spend the night under any circumstances. That’s the kind of woman I am.” And watch Burghoff see right through it. It’s a different kind of thrill to see her forced to lay down her worn weapons and speak openly with him. This is Joan: she has a four-year-old son. She lives on 12th street. With her mother. And she’s been divorced twice. How very right that we wouldn’t learn of Joan’s first marriage until now, when she is finally secure enough to share it with someone who challenges her to. Someone, finally, who might prove worthy of her risk.

This is a very modern, adult beginning to a romance. It involves history, attraction, a strange certainty, regretted behavior, imperfection, and compromise. There is no guarantee from either party that things will work out. But the stark honesty they’re engaging in, here at the very beginning of their relationship, is unlike anything we’ve seen on Mad Men before. It’s an opportunity fit for our queen.

Laced through the mess of “The Forecast”—in Joan’s storyline, in Don’s, in Sally’s, and possibly even in Betty’s—is the undeniable feeling of stubborn hope. As Don Draper tells his realtor with the vaguely threatening certainty only he could muster: “I have a good feeling about things!”