The Blighted Language of Kenneth Lonergan 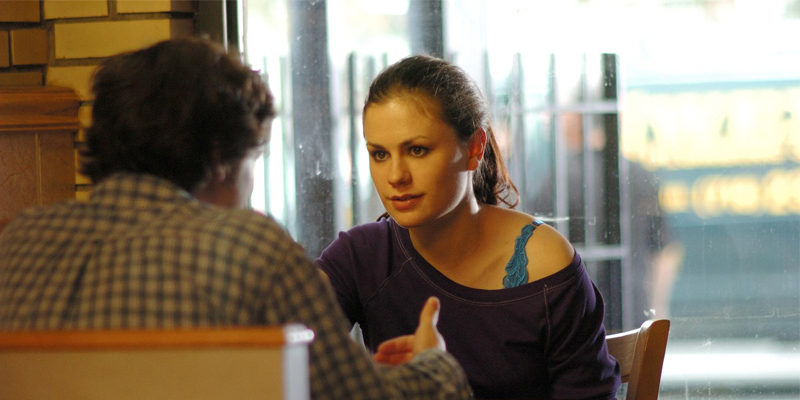 Fox Searchlight
Lisa Cohen’s sentences tumble forth in indignant, wounded gasps, as if escaping from some pocket buried deep beneath her crust. She blasts through arguments and affectionate gestures, clashes with teachers, bus drivers, and friends; wild with words in the way of those learning life’s language. In Margaret, Kenneth Lonergan’s cacophonous New York epic, Lisa (Anna Paquin)—a precocious high-schooler with a penchant for melodrama—is not so much careless as she is uncontainable: “I’m sorry,” she says to the classmate (Kieran Culkin) to whom she offers her virginity. “I’m not completely in control of my emotions.”

She is, in this sense, not so different from her mother, Joan (J. Smith-Cameron)—”You’re a little cunt, you know that?” the latter snipes—or, in fact, from Sammy and Terry Prescott (Laura Linney and Mark Ruffalo), the sibling protagonists of Lonergan’s You Can Count on Me. In the crisp quiet of small towns as in the seethe of the city, the filmmaker’s tacit subject is our blighted manner of speaking, our willingness to wield words as cudgel, or shiv. With unremarkable idioms (“Don’t be a stranger”) and deft turns of phrase (“You have every right to falsify your own life, but you have no right to falsify anybody else’s”), Lonergan nods at the cruel truth of human communication: The heart has no grammar, the soul no set syntax, and so to be in the world is to lose oneself in translation day after day after day.

I am, on this point, no longer Lisa’s age, though I can remember that time as if I still were; I am not yet Joan’s age, either, though I can see the man I’ll be now coming into form. I am not, on this point, completely in control of my emotions, either, and of my wild, blighted words—their torrent, their tumble—I am keenly, humiliatingly aware. “I need to ask you point blank,” I once wrote, in what turned out to be my own act of self-sabotage:

Are you still interested in seeing where this (whatever “this” is) goes? I don’t want to be suffocating, but I’m having trouble figuring out what your thinking is. I just wanted to be up front: I really like you (you know this). But I want to give you as much space as you need. I’ll probably text you this weekend anyway, to see how you are, and to invite you to come over. I hope you’re well.

That I received no response to this desperate ramble, as humid with loneliness as the Southern summer, is no surprise if you speak Lonergan’s language. Both the young and the old are capable of ruining things. They just do it at different speeds.

Sammy and Terry, in You Can Count on Me, are ramblers too—and, as in my case, it’s half frankness, half feint. Orphaned in childhood, the pair, once close, has since grown apart: While Terry works brief stints in Alaska and Florida, restless Sammy still lives in the old family home, working as an employee of the local bank and acting as a single mom to son Rudy (Rory Culkin). Long before Terry’s return upends Sammy’s life, though, Lonergan crafts their dialogue in a common tongue, native and thus never forgotten. Compare Sammy’s description of her feelings about Rudy’s father to Terry’s explanation of why he couldn’t write:

I actually gotta confess to you, Sammy, that the reason you may not have heard from me for a while is that I’ve been unable to write on the account of that fact that I was in jail for a little while.

For both Sammy and Terry, such tortured construction is a standard tactic, stringing the meaning along until the sentence can no longer support it. Out on language’s limb like this, even the most ordinary phrases assume a certain risk, as if one more word might be the weight that snaps the branch. “No one knows what to do with you,” Sammy says later, leaning on the familiar expression. “I know how they feel, man,” Terry replies, the exchange suddenly fraught with unmentioned specifics. This is, I see now, my failed strategy: To split the difference between the coy and the honest; to fill the space between us with thoughts I can’t contain, and then retreat to safety. Lonergan’s genius is to acknowledge that language is the shield and the spear, the parry and the thrust, that speaking and writing are often forms of hiding in plain sight.

In retrospect, I realize that my frankness was, of course, a feint. I have been in love with the man on the other end of that message twice in my life, and on both occasions I was so wounded by the unmentioned specific that I concealed it in my sentences: He never loved me back.

Margaret inhabits the same interstitial space between what we say and what we mean. It’s noisy with euphemism, rowdy with conversation, yet its characters struggle to communicate even the most essential information. When Lisa, reeling from her role in a woman’s death and at loggerheads with her mother, decides to have sex for the first time, the mid-coitus conversation is excruciating—in part because Lonergan captures with precision the particular discomfort of that intimate moment, and in part because the exchange leaves neither Lisa nor her paramour with any real understanding of the other. “I love you,” she says, as he moves distractedly atop her:

Ok. One second. Oh! Sorry. Sorry about that. Kind of got away from me.

Did any of it get inside of me?

Against the performative bluster of the high school’s seminars—their arguments over the meaning of 9/11 and King Lear rendered with wrenching exactitude, or Lisa’s long, breathless attempts to regain control by filling the space around her with thoughts she can’t contain—this moment in Margaret might seem minor, terse and tight-lipped. In point of fact, it suggests the effect of the whole, which is to emphasize the abject terror of language, its inborn contradiction: The primary mechanism by which we forge a connection between the self and the world is also the primary mechanism for severing it. “We are not supporting characters in the fascinating story of your life,” the dead woman’s closest friend, Emily (Jeannie Berlin), admonishes Lisa in the film’s closing stages, and the hurt this causes our teenage heroine amounts to a kind of revelation. The trouble with life’s language is that it mimics our manner of speaking, in which the spectral presence, the unmentioned specific, is always, inevitably, you.

Lonergan’s project, in You Can Count on Me and Margaret, is to crystallize the exact moment at which our emotions run aground on the shoals of their expression, made somehow smaller, shabbier, by the very act of admitting them. His language, in the former, is as simple, as clean, as winter’s first snow, warding off the eventual dirtying; in the latter it’s intricate, impassioned, already soiled by the passing of the season. But both films nonetheless recreate the frustration of being bound by the blight, and of endeavoring to communicate anyway: In Lonergan’s universe, not far from our own, there is still something faintly noble, and certainly human, in failure.

This is, I suspect, the reason for his preference for sound over silence: Margaret is suffused with horns, sirens, telephone calls, ticking clocks, an aural deep focus that slowly homes in on sidewalks, storefronts, and restaurant booths, or pans across the private conversations unspooling in a series of apartments. It may simply be that I need reassurance—reassurance that I am, for all the many foibles I’ve described in this magazine’s pages, still deserving of love—but it seems to me that Lonergan’s purpose is to remind us of Emily’s warning to Lisa: We are ultimately the protagonist in only one story, and that story is our own.

Lonergan’s language thus approaches a poetics of longing, loss, and the endurance thereof, as if to indicate that an emotion is of no less import for going expressed but unrequited. The beauty of his work is its one demand, which is that we feel fully both the pleasure and the pain of the relationships we forge, not to mention the ones we ruin. As his character in You Can Count on Me explains, “I don’t feel like my life is off to the center of what’s important. I don’t feel like my happiness and comfort are based on closing my eyes to trouble within myself or trouble in other people.” Trouble within myself, trouble in other people: This is the grammar, the syntax, of what I’m trying to say, run through with the spare, lean wisdom of Protestant church hymns and country Western ballads, of Bach’s six Cello Suites and his St. Matthew Passion, of the passing seasons of the poem from which Margaret takes its name:

Nor mouth had, no nor mind, expressed
What heart heard of, ghost guessed:
It ís the blight man was born for,
It is Margaret you mourn for.