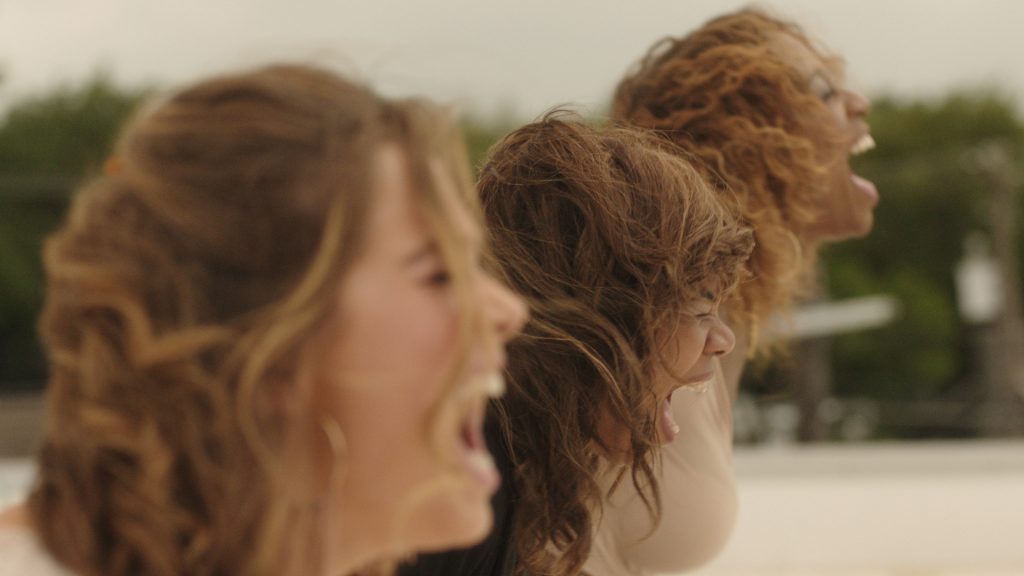 Party Foul: Fear and Loathing in Support the Girls

The past few years feel as though they’re in a temporal competition of one-upmanship. 2016 was a dumpster fire, but at least one that my peers and I could joke about, until near the end. 2017 saw the dumpster fire spread to the apartment complex, a confirmation that the nightmare is real. 2018 took the anxiety and anger of the previous two years as a challenge. Hold my beer. You have anxiety? I’ll show you fear.

The movies that stood out most to me this year dealt with our collective fears from the past few years—real and imagined, literal and theoretical. Minding the Gap sorts through the awful legacy of the cycle of abuse. First Reformed explores spiritual anxiety through environmental concern. Hereditary dives into family demons made literal. Suspiria concerns itself with national and personal guilt. Eighth Grade covers, well, eighth grade. Annihilation is exactly what it says on the tin. One of the greatest films, though, slipped in and out of a limited release, as unassuming as its protagonist.

Andrew Bujalski’s Support the Girls covers a single day, give or take, in the life of Lisa (Regina Hall), the day manager of Double Whammies, a sports bar/“breastaurant” off the I-10 somewhere in Texas. Lisa has a laundry list of problems, each with their own unique anxieties: a racist and sexist boss, an understaffed restaurant, a waitress who can’t find childcare for her son, training needed for prospective employees, boorish customers, an attempted robbery of the restaurant safe, an employee that needs to be fired, the cable out with a big fight scheduled for the night, another waitress in trouble with both the law and her abusive boyfriend. Her marriage is on the rocks. She isn’t paid enough for the crap she has to put up with. Lisa needs support. She’s been giving and giving and giving, and keeping nothing for herself.

Support the Girls feels much like the restaurant it’s set in: brightly colored, chipper at first, and then heavy, like eating a big plate of fries too quickly. The end result is a gross feeling, the sensation of being both unsatisfied and too full at the same time. It sticks with you afterwards, like spilled beer dried tacky to the bottom of your shoes.

The words are blunt, but in context they cut to the quick. Lisa’s boss, Cubby, is in a mood because of a break-in, a cable outage, and a car wash, spearheaded by Lisa, which he hadn’t authorized. The car wash is a fundraiser for one of the waitresses, who’d gotten in a fight with her abusive boyfriend and run him over with a car the night before. The money is supposed to get her a good lawyer. Cubby doesn’t know any of this, and he wouldn’t care if he did. He just wants Double Whammies to function properly, staffed by pretty women in skimpy clothing because it brings in customers. He wants to beat the Mancave, a national chain of competitive breastaurants about to open a location just across the highway. He wants none of the messiness that comes with employing real people. “Rule number one,” he tells Lisa repeatedly. “No drama.”

Mark, the night shift manager, sees things the same way. The staff aren’t people, they’re merely bodies with names attached to them. They can be graded on a scale by appearance, hired out for private frat house parties, treated as though their physical assets are the only things about them of any worth. Mark sees no problem with this attitude. Cubby shoots down his ideas—not because they’re abhorrent, but because they’re a potential liability issue.

Lisa is different. She sees her employees as people, each with their own problems and faults and needs and hopes, and she treats them kindly and fairly, even after she’s seen them for who they are. When Cubby repeats his “no drama” rule, Lisa fires back: “You really want me to tell a bunch of 20-year-old girls ‘no drama?’” She claims her staff at Double Whammies is a family, with all the love, frustration, and drama that the word implies. Everyone who crosses the restaurant’s threshold is a person worthy of respect, from the insulting jerk in the corner booth to the employee who tried to steal the safe. It’s clear that Lisa doesn’t play favorites, but she’s fond of her long-term staff. Maci (Haley Lu Richardson) is cheerful and enthusiastic, a walking good attitude in cowboy boots. Danyelle (Shayna McHayle) is smart, good at her job, and obviously deserves a managerial position herself. Lisa is a good person and a good boss; the employees like her. She pours love into everything she does, because she cares about every little aspect of her job, even though it’s hard, and much of it is unpleasant. She is loving and giving and firm and perfect for her position, but the job is slowly killing her.

Lisa has been holding Double Whammies together through force of will for far too long, despite the best efforts of her boss to undermine his business and her authority. He’s tried firing her multiple times, but she just keeps coming back. He doesn’t know how to fill out the paperwork to complete the firing—she’d have to fill it out for him to sign. So instead, Lisa comes into work every day, puts on a brave face for her employees, fills out the schedule, keeps the kitchen stocked, and defends her employees from her own boss and from the boorish advances of the worst customers.

I used to say that everyone should have to work a food-service job at some point in their lives. When I said it, I lumped myself in with everyone else I’ve ever ordered food from, as though the nine months I spent making sandwiches in the cafeteria my sophomore year of college can measure up against a career waiting tables, managing hurt feelings, throwing out sexual harassers, stretching tips, stretching shifts, stretching employees across a schedule that will not budge and yet must be satisfied. Lisa is the best possible person for her position, because she is the right mix of firm and empathetic and giving. She cares enough to try, even when she’s being set up by a system that doesn’t care if she’s headed for failure, but will hold it against her if she does.

Eventually she realizes that enough is enough, that she’s been fired too many times for the firings not to take. She’s finally reached her breaking point. She started her day by crying in her car and it only got worse from there. Before she goes, she brings in a fired employee to Double Whammies for a drink, then wanders around the back of the restaurant placing heart-shaped stickers on the walls and doorframes. She’s already poured her love into the place, day after day, shift after shift, time and again, so the motion feels almost routine. Peel the backing off. Place the sticker. Give it a pat, move on. More to do. Suddenly the fear is gone, the calculations gone, the need to keep Double Whammies running gone. It’s time to say goodbye, to let the anxieties go, to make a speedy exit.

Enough isn’t enough. Her speedy exit is halted by a dead car battery. Her husband is gone. The waitress they raised money for is back with her good-for-nothing boyfriend. Everything that could go wrong did. And, unbeknownst to Lisa, the waitstaff are plotting a revolt.

Danyelle will likely take Lisa’s place—a deserved promotion, but one she quickly realizes she might not want. With Lisa gone, the ugly parts of working at Double Whammies are more obvious. Danyelle looks around the room. Half the customers are slack-jawed, staring at the big fight on TV. The other half ogle the waitresses, making ugly conversation, comparing their friends to women as though it’s an insult, and as though there are no women in earshot. One of them spills his beer on Danyelle in passing, and hardly pauses to mumble a perfunctory “sorry” before moving on.

Danyelle is done. She does not like working here, and doesn’t care about this job, even though she’s good at it, and needs it to support herself and her son. So she does what Lisa could never have done, and lets Cubby know exactly what she thinks of him—not with words, but by cutting the cable. The ensuing fracas, emceed by Maci standing atop the bar, is brief and ugly. The restaurant is shut down early for the night.

Lisa is a general manager of a restaurant, and she will always be one. She soon finds herself interviewing at the Mancave across the highway. Out of the frying pan, into the fire; trade in the racist, sexist owner of a single local restaurant, and you get a faceless corporate chain that values their workforce even less. “The girls aren’t brain surgeons,” the hiring manager tells Lisa. The Mancave has worked very hard, she says, to “idiot-proof” their system, and can turn staff over very quickly if need be. Lisa smiles and nods—she has to, if she hopes to get hired—but it’s obvious that the Mancave is the impersonal, hellish version of Cubby’s entire philosophy. Girls will be girls. Come be a man at the Mancave. An employee is a body in a tiny uniform, no brains attached. Hold my beer while I watch TV. Keep your head down. The job (or the year) sucks, but there’s nothing you can do to change it.

Except not all of the employees are faceless. Danyelle and Maci are there too, also interviewing; Cubby fired them for their cable-cutting stunt. Lisa is horrified. Maci is optimistic. Danyelle tells Lisa not to feel bad about them losing their jobs. “There’s lots of other shitty jobs out there, including this one.” (There’s lots of shitty years out there, too, past and present.) They pass around a bottle of terrible hard liquor as they sit on the roof of the Mancave, watching the cars on the highway go by. Maybe they’ll be a family again. “Family,” Lisa spits out, and this time the word feels like a curse. She’d had a family at Double Whammies, and look where it got her. The fear is still there, just in a different form this time. (2018 is just a repeat of all the tumultuous times that came before.) At Double Whammies, at least the uncertainty was predictable. (At least with the previous years, we have the benefit of hindsight.) Who knows what will happen next?

Maci and Danyelle don’t let Lisa sit in her sadness for too long. The two take turns standing at the roof’s edge, screaming at the top of their lungs, until Lisa joins them. The scream is not a scream of fear. It’s a response to the fear, to the crushing weight of the future, to the shitty jobs to come. This scream is a scream of defiance.