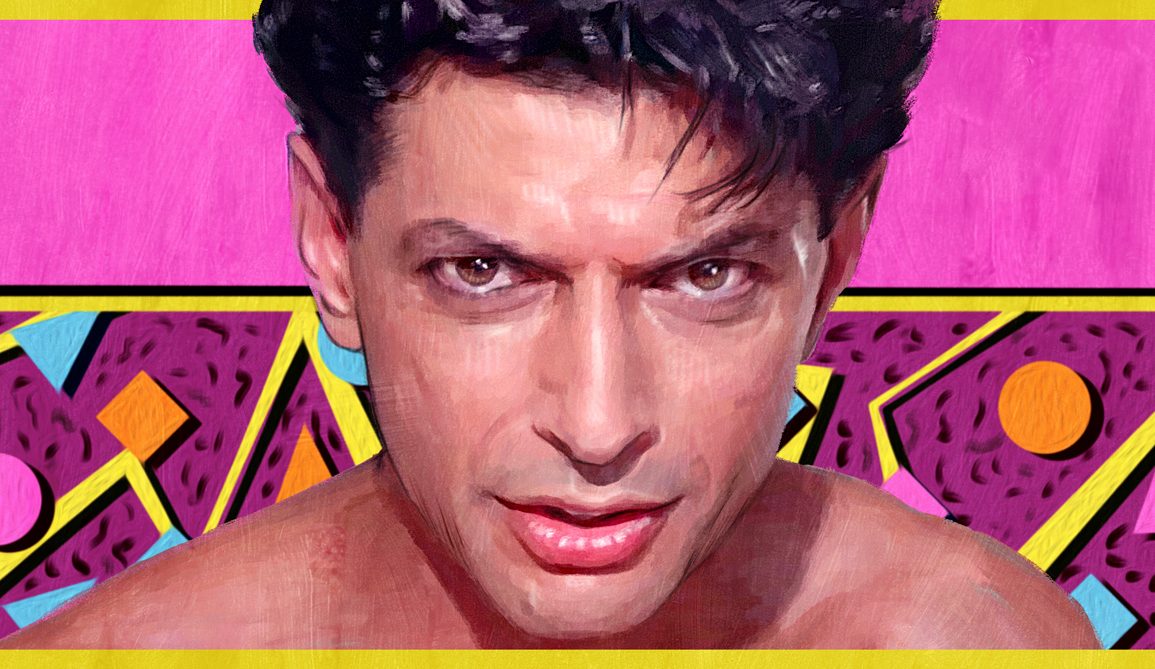 As with many people who spent a disproportionate share of their childhoods in front of a television, a handful of movies came to arbitrarily define my coming of age by virtue of simply being on cable all the time. These selections are highly subjective, dependent on geographic location, micro-generation, degree of parental strictness, and precise window of time during which one was most susceptible to influence. My era of prime suggestibility fell between the years of 1988 and 1992—the bowels of my pre-adolescence—when my social calendar was virtually empty and the cable guide was full of racy 1980s rom-coms.

In my memory, the majority of these pivotal movies take place in Southern California. While this is not entirely untrue, what I think I’m actually remembering is a pervasive cultural obsession with Southern California that inevitably trickled down to children living in the cold, gray suburbs of Anywhere Else, America. I can roughly trace my own fascination back to David Lee Roth’s 1985 music video for “California Girls,” an iconic piece of pop culture that cemented the idea that this sunny, faraway place was the American epicenter of beauty and fun.

My favorite California fantasy of this era is Earth Girls Are Easy, a 1988 romantic comedy about a manicurist who is forced to host a group of human-ish aliens at her place for the weekend after their spaceship crash lands in her pool. Earth Girls hit some of the major plot points that attracted my pre-adolescent brain: a dance-off, not one but TWO makeovers, and enough pop culture references to build a small village made of Cheez Whiz and Nair and Commodore 64s. This genre masterpiece also exists inside a kind of magical Venn diagram of sci-fi, musical, and romantic comedy—a space previously occupied in my mental index solely by Little Shop of Horrors. I considered Little Shop to be a much more “serious” movie, mostly because I knew it had been based on an off-Broadway musical, which implied, at the very least, an air of class.

Earth Girls pushes against every hint of class, instead embodying a kind of beehives-meet-spandex campiness I often equate with The B-52s (who incidentally dominate the soundtrack). In honor of its influences, the movie’s aesthetic pays homage to both 1950s sci-fi and 1960s beach party flicks while fully embracing the equally beloved and maligned landscape that ruled over 1980s pop culture: LA’s San Fernando Valley, a place where everyone seemed to be rich, fun, and ready to party.

The aliens in Earth Girls recognized these same qualities when they detoured from a mission of indeterminate purpose for what’s basically an intergalactic booty call. Distracted by the earthling babes they tap into through a Los Angeles TV signal, space pilots Wiploc and Zeebo (a pre-In Living Color Jim Carrey and Damon Wayans) throw their ship off course, awakening their no-nonsense captain Mac (Jeff Goldblum) from a deep cryosleep. Mac is forced to emergency-land their ship, which conveniently drops into manicurist Valerie’s (Geena Davis) kidney-shaped backyard swimming pool.

“Oh, this is too good,” Valerie says. “There’s a giant blow dryer in my pool.” She thinks the spaceship a delusion brought on by her relationship troubles with Ted (Charles Rocket), an egocentric emergency room doctor she recently dumped for attempting to cheat on her with a nurse. After a brief panic that she’s been abducted, Valerie realizes these aliens are harmless and agrees to help them by having her stoner pool-guy Woody (a truly delightful performance by Michael McKean) drain the water so they can repair their ship.

Convinced Ted will want to dissect her furry alien houseguests (think: Alf crossed with Teletubbies), Valerie takes them to her salon—Curl Up & Dye—where her boss Candy (Julie Brown, also the film’s co-writer) shaves their fur and makes them over into three cute guys whose broken English seems less extraterrestrial than it does European. The rest of the movie is spent keeping the aliens away from Ted, during which time they go clubbing, rob a convenience store, and drive a Woodie wagon into the iconic Randy’s Donuts sign. Over the course of this wacky weekend, Valerie and Mac fall in love and ultimately depart Earth for Jhazzala, a planet she knows little about except that it likely supports carbon-based life.

On the surface, Earth Girls are Easy is a classic worlds-collide romantic comedy: a circumstantial encounter with a humble, reliable guy allows a modern, unlucky-in-love girl to realize she’s engaged to an arrogant jerk. We’re shown little about Ted and Valerie’s relationship other than the fact that he’s lost interest in her sexually, which is measured by them not having had sex in two weeks (a statistic the film comically treats like the utter demise of desire). They seem like a couple engaged out of convenience, wanting to live out the Valley’s version of latent nuclear aspirations. Their picturesque, pastel-hued neighborhood evokes a mid-century quaintness that is both familiar and forced, as though Valerie on some level already realizes that this life is only what she thinks she wants.

Enter Mac, whose big-reveal transformation from furry blue alien to perfect male specimen is arguably the film’s most iconic moment. After performing her voodoo alien-makeover magic, Candy opens a literal pod (a.k.a. tanning booth) to unveil a shirtless Jeff Goldblum bathed in light—a not-so-subtle nod to Goldblum’s emergence from a telepod in David Cronenberg’s The Fly two years prior. “This is the true sequel to The Fly,” Caryn James wrote in her New York Times review, “with Mr. Goldblum once more playing the non-human creature Ms. Davis can’t resist.” Goldblum and Davis were married at the time, which explains their rich on-screen chemistry (Earth Girls being the last in a trilogy of films they made together before their divorce in 1990).

Though it’s not hard to top fiancé-Ted’s flatness, Mac does so with that soon-to-be trademark Goldblum panache, wooing Valerie with both earnest concern for her happiness and old Hollywood good looks. After he dispels her fears of anatomical incompatibility and astronomical long-distance phone bills, they have one of the weirder sex scenes on record, rolling around in a blacklight, holographic embrace to a soundtrack reminiscent of Pure Moods. The next morning, Valerie takes seven birth control pills, suggesting that Mac is not only loving but extraordinarily virile (and also that she doesn’t understand how birth control works). “Is driving a UFO a good job?” she asks him. “Do you own your own home or do you rent?” The punchline is that the dating pool on Earth is so mediocre that women are forced to pair off with human-enough men from other planets.

Technically speaking, Earth Girls is also science-fiction, even if the sci-fi mostly takes place in the five or so minutes we spend on the spaceship and in the subtle stylistic references to its nuclear-era predecessors. The film’s cartoonish opening sequence evokes the atomic age animation of Forbidden Planet and The Jetsons. This retro, technicolor style makes its way through the mise-en-scène, from Julie Brown’s “Beauty School Dropout”-inspired makeover number to Valerie’s vintage-inspired pastel kitchen, culminating in a memorable (and truly creepy) dream sequence during which Valerie is trapped in a black-and-white sci-fi nightmare whose alien characters look like part of a Twilight Zone reunion.

In a way, Earth Girls turns this narrative on its head, instead making the arrival of aliens entirely obvious—but to an audience that is either too oblivious, too self-involved, or too tolerant to care. Once Valerie determines her alien house-crashers are not going to abduct and experiment on her, she invites them inside for breakfast, where they begin to explore humanity through the trappings and technologies of contemporary life. They’re a lot like children engaging in oral object exploration. And like children, they eventually make their way to the TV, where they absorb pop culture in real-time, quoting classic movies and ad copy back at the screen and building the limited vocabulary that lets them pass as human for the rest of the movie. This device is a transparent commentary on both the pervasive influence of pop culture and the perceived stupidity of Valley-folk, who are too dense to notice the difference between humans and aliens. In one of the greatest club scenes in cinema history (filmed at LA’s Griffith Observatory dressed up as a club called “Deca Dance”), three women fight over who is going home with Wiploc (Carrey) after they see him extend his alien tongue six inches out of his mouth; later, Valerie is able to convince the police that the aliens are a band whose company she won through MTV; and pool-guy Woody is stoned enough to believe their spaceship is actually a car made in Finland.

Only two characters seem fazed by the existence of aliens in the Valley. One is of course Ted, who ironically wants to abduct and perform experiments on them, thinking this discovery will elevate him to Time Magazine’s “Man of the Year.” The other is Valerie’s nosy neighbor, Mrs. Merkin—an elderly woman with a beehive wig and a habit of eavesdropping on other people’s gossip using a long-range listening device. On one hand, Mrs. Merkin is the film’s voice of reason, the only person to exhibit some degree of shock and disbelief at a spaceship in her neighbor’s pool; on the other, she is a vestige of the past, personifying the well-worn fear of the “other” that underlies much of the 1950s sci-fi Earth Girls affectionately references.

Much like many of its 1980s sci-fi contemporaries, the threat in Earth Girls is humans, specifically those driven by greed and narrow-mindedness. If this story has a moral, I think it’s probably as simple as: embrace the outsider. But there’s also a lesson to be learned about our collective perception of the Valley—a place widely regarded as America’s vortex of vapidness. Earth Girls leans into every Valley stereotype, aware that we’re both judgmental of the rampant stupidity and envious of the endless party it seems to facilitate. Much like “California Girls,” the movie is ultimately saying that Southern California is the quintessential Earth experience, alluring enough to entice even extraterrestrial life. I want this point to be deep, but the Valley is not deep; it just wants to party, which is perhaps the most attractive tourism Earth has to offer.